He should have just asked him out for coffee.... 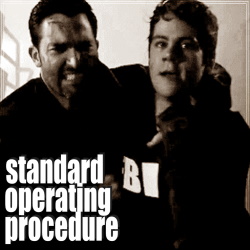 “You could have just asked me out for coffee!” Derek turned an incredulous expression towards Stiles. He winced as Stiles continued half-carrying/half dragging him away from the building where the rest of the team were completing the operation.

“Are you seriously flirting with me – NOW?”

“I know, I know – SOP is important so that people don’t end up getting their toes shot off or something! Here, let’s get you into this.” Derek gratefully sank into the open doorway of one of the department’s SUVs, unable to hide a wince as it tugged at the gunshot wound. Stiles ripped off his bulletproof vest, and tugged down the collar of his shirt, showing the impressive bruise that was forming. “Good job you were wearing a vest,” Stiles said and Derek nodded his agreement. “But I’m more worried about the bump on your noggin.”

“What?” Touching his forehead, Derek looked at his hand, the painful swelling and sticky redness covering his fingers confirming Stiles’ words.

“Head wounds bleed like a mother, so we should get you checked out. Hey – Derek! You’ve gone a really awful shade of grey there, dude – do you need – “ A wave of scarlet seemed to overcome his vision and Derek passed out.

The beeping of machines was the first noise he registered and he blinked open eyes that felt like they had been glued shut. The bright lights hurt his head and he squeezed his eyes closed in protest, grunting with approval when someone dimmed the sharp brightness and he could tell the room was dimmer. Opening his eyes again, he watched Stiles return to his bedside. Stiles looked a little rough around the edges – rumpled long-sleeved tee-shirt and pants, dark circles under his eyes, stubble beginning to show on his normally clean-shaven cheeks.

“Where – ?” He began to ask but Stiles interrupted him.

“They weren’t sure why you passed out.” He saw the realisation hit Stiles and groaned internally just before he spoke. “Oh my God, you fainted at the sight of your own blood!”

“Prime blackmail material right there!” Stiles smirked unrepentantly and Derek knew when he was beaten, and with a sigh, he gave in.

“So – what about that coffee date?”