Jared and Jensen were supposed to be going to the SPN Halloween party together but they had a fight while in Vancouver and Jared left without any warning. Jensen is sure Jared's going back to Austin. When a friend calls at night to let Jensen know that Jared was arrested for being in a bar fight, he takes the next flight back to Austin.
Jared doesn't answer his phone and his history with mental health struggles makes Jensen worry all the way until he gets to Jared's house.
And yet he was not prepared to see Jared standing outside on his bedroom windowsill, eyes closed and ready to jump.
The next few minutes and days are the hardest in Jensen's life and it's the first time he ever breaks down. He always loved Jared, but the prospect of losing him changes his view on their relationship completely.

I'm so happy to finally be able to share this story with you. I finished it in April already and it felt so weird not to share it right away.
My friend Saramina80 provided me with a short scene that immediately caught my attention and without thinking about it too much, I knew I wanted to write about the bar fight and Jared's arrest.

It was hard for me in the beginning to step out of my comfort zone and not write a meet/cute story.

I never had mental health issues, nor am I a medical professional, so be gentle with me if you find mistakes. I wanted to focus on their relationship and how this incident changed it. How Jensen changed after what happened to Jared in this story.

I got to work with Emmatheslayer as artist for this big bang.
You will find her art in the story and in this link Emmatheslayer

Here's the link to the challenge on LJ LJ

Thank you for reading and I'd love to read your feedback. Kudos are also very welcome <3

Please remember that english is only my second language.

Thanks to Masja_17 for being my beta ❤️

more notes at the end 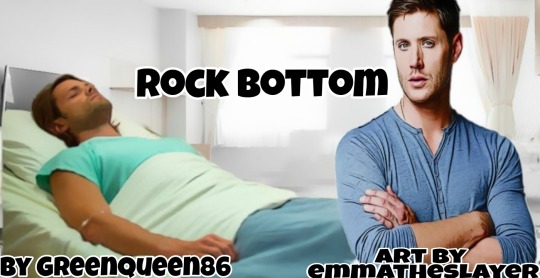 I kept everything inside

And even though I tried, it all fell apart

What it meant to me will eventually be

A memory of a time when

I tried so hard and got so far

But in the end it doesn't even matter

I had to fall to lose it all

But in the end it doesn't even matter

The day after his arrest

These are the two questions that keep spinning in Jared’s head. The memories of last night’s events are faded and blurry. He somehow got into a fight at his own bar and was arrested.

He doesn’t know how it all started. He only knows that things got ugly real quick.

And here he is now, alone in his house in Austin. Jared’s sitting in his room and reading the news about the fight and his arrest on his phone.

His mugshot is all over the internet by now. He looks like a beaten-up alcoholic. Tired.

How did this happen? Did he really drink that much last night? Who started the fight?

He has no idea.

But Jared now knows for sure what people think of him.

He's gonna be lucky if he doesn't get fired.

For a long time, I had a feeling that Jared uses booze to medicate himself.

That’s the result of an adult male not taking responsibility for himself.

It’s long past time for him to get into rehab.

He’s gotta be responsible for his actions and the consequences of those actions.

Him being drunk isn’t out of the norm.

He always knew that people were disappointed in him. No matter how hard he tried.

His career is unparalleled. Jared went from tiny, nameless roles in tv-series to a recurring role in Gilmore Girls and is now one of the leads in the longest-running Sci-Fi series in the US. They’re currently filming the 15th and last season of Supernatural. This is his biggest milestone to date.

And he found the love of his life in Jensen, with whom he spends most of his time. You’d think that he’s the happiest man on earth.

A few years ago, Jared was diagnosed with clinical depression and anxiety. He has tried to commit suicide several times, but everyone made sure to keep the media out of that.

He doesn’t want to be medicated to help with these issues, instead, he’s having therapy, works out regularly, does yoga, and meditates.

Jared’s been open about his depression and anxiety with his fans and the reactions have been very mixed. Some people praise him for his openness with his mental illness, others impute that he’s just pretending for PR. And there’s a third party who doesn’t understand how someone like him, who has everything someone could ever want, could be depressed.

And he sees all the hate tweets. Jensen begged him not to read those, but they’re screaming the loudest and Jared just can’t ignore them.

There are so many people out there who think that he’s a bad actor. They say he gets in the way of the actual storyline of Supernatural and that the show would be better off without him. And sometimes he feels he’s only still on the show because Jensen begged the people from CW not to fire him.

He just can’t win. Jared feels like a failure. He let people down when he didn’t feel good enough to film, when he couldn’t get out of bed. When he couldn’t even care for himself.

That’s when Jensen took over and made sure to take care of Jared, call his therapist and stay with him as long as needed.

Jared wanted the world to know just how happy Jensen makes him. That he’s his rock, his everything. But being the stars of a Sci-Fi TV series, coming out wasn’t an option. It was even in their contracts and Jared wishes he had never signed it.

This weighs heavy on Jared. The fact that he can’t be his true self with Jensen when they are in public.

He can’t take his eyes off of his mugshot and the comments that appear underneath it. Jared has lost count of how many times he disappointed Jensen, his fans, his family.

Getting arrested for getting in a stupid bar fight is the lowest he has ever gotten.

And that’s why he didn’t answer any of Jensen’s calls or text messages. He’s too embarrassed about what happened.

The voices in his head are getting louder with every comment he reads.

Jared knows he’s worthless. He’s not worth Jensen’s time or affection. He’s ruining Jensen’s life because he always needs Jensen to take care of him and he can’t give him anything in return.

Jared’s spiraling. The voices drown his own thoughts.

The world is better off without you.

Those sentences keep repeating in his head like a mantra. Over and over again.

The voices in his head are getting louder and louder.

He’s standing in the middle of the room, his hands pressed to his ears, his eyes squeezed shut and he’s screaming.

Jared’s chest is heaving. He can’t remember his breathing exercise because the voices in his head are so loud.

His chest tightens and it’s getting harder and harder to inhale deeply. The walls are closing in around him.

Beads of sweat are forming on Jared’s forehead and he starts crying.

“Stop! I can’t do this anymore. Please.”

He opens his eyes and wipes away the tears when his gaze lands on the window in front of him.

He takes three big steps and reaches for the handle and opens the window.

Fresh air is streaming into his face and he takes a deep breath, closing his eyes again.

When he opens his eyes he looks into the grey October sky and he feels like the weather is reflecting how it looks inside of him right now.

He climbs on the windowsill and without thinking about it for another second, he jumps out of his bedroom window.

It only takes a few seconds for his body to hit the concrete.

Right before everything goes dark and the voices disappear, he hears someone scream his name.