A small cabin with a view of a lake... Friends taking a break...

Thanks people for the lovely and encouraging words! 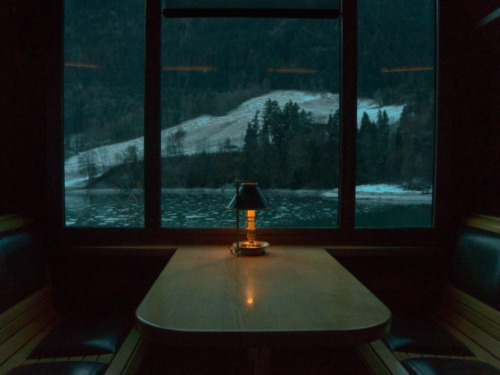 It was only 7 pm in Switzerland, but at the beginning of January, it was already dark in the tiny wood cabin.
Bill Tanner, Q, Gareth Mallory and Eve Moneypenny had rented it at the last minute for the week-end, after a work related event held in Lausanne had left them close. The friends had decided to spend a well earned small break snow-shoeing around Crézus. After being outside for the whole day, and with only a small sandwich as picnic lunch, they had come back ravenous.
It was the perfect opportunity for dipping bread in melted cheese.
Oh, the joy of fondue!
The small table with the view of the lake was definitely crowded with everything on it… And the four were jostling a bit between the cheese bubbling happily on top of the tealights, the salad, the bread and the charcuterie.
The wine glasses were at various levels and Q was topping everybody to, at least, get the bottle of Fendant out of the table.
Gareth was seated close to the window, and Eve was in front of him. Q and Bill were involuntarily playing footsie because of the size of Q’s legs. Trying to change his knees position, he shuffled his legs, lost his balance and to avoid falling off the bench, grabbed Mallory’s thighs in emergency, and promptly, both became ruby red. Bill watched with interest, Eve smirked and declared: ‘Oh, no way! Nobody is ever going to believe me’.
‘What?’ answered Q, dumbfounded.
Bill was still looking on the fence, Mallory was stammering but Eve doubled down:
‘I’m going to call my wife from my room, while you negotiate who’s on top… in these bunk beds of yours.’
After she walked out of the door, Bill asked nonchalantly:
‘What gave us away, do you think?”