Lilith can't sleep, not with the nightmares, and neither can Luz.

It’s only to be expected, really, after everything that happened. Sleep has always been a luxury for Lilith, even when her life was fine and perfect in the Emperor’s Coven. Too often her mind would swim in the worst way, conjuring images where she would visit the Owl House only to find there was no house at all. Or she would find the house, but empty and lifeless and torn asunder by the claws of an owlbeast. Sometimes the house was undamaged, but when she entered she would find her sister standing in the center of the living room. Eda’s eyes were dark, even the sclera, and she would turn to face her with a slack expression.

Sometimes Lilith dreamed she found a cure. She’d rush to the house, potion in hand and heart hammering in her chest, only to open the front door and gasp awake. As always, there is no cure, not to her curse. Next time , she’d think, next time I’ll find a cure .

Those were her nightmares from her past life. She had them frequently, every month if not every week, but it is something she got used to.

These nightmares, however, are different.

In these nightmares, there are others.

She dreams of Eda leaving her bruised in the debris of the emperor’s castle. Her sister is holding a human in her arms before walking away, throwing only a furious glance over her shoulder. These are the better nightmares, in all honesty, because even though Eda leaves, Eda is safe . The worse ones take place in a subterranean chamber, or in a cage bathed in green light. Belos is sometimes there, his voice dripping with derision and disappointment as he condemns her and her sister to petrification.

Sometimes Lilith watches from outside the cage, in a reality in which she didn’t turn traitor. She watches, but she can’t do anything about it. Her legs are frozen in place, and Eda’s screams linger in her ears. Other times she is in the cage with her sister, and King isn’t there to defend her. Eda tears into her body but Lilith doesn’t resist, numb and paralyzed.

The most bittersweet of them all is the dream under the night sky. She holds Eda’s face and whispers a spell. The feathers retract. Her form shrinks down to her witch self and her eyes brighten, golden irises rising from the shadowy gaze of the owlbeast. The dark cloudiness vanishes from her gem, and Eda is cured . Her sister stretches up her arms and smiles, thanking Lilith.

Lilith sits up from the bed, rubbing at her temples. Her throat is dry and her eyes wet. It’s a familiar scene to her, and she presses a tissue to her face before rising. The glass of water beside her bed is empty, and she takes it in hand as she exits the room.

The hallway is dark and silent, but she pauses. A sliver of moonlight spills out from the human’s bedroom door. Lilith peers inside to see an empty pile of blankets and an open window, and her heart drops. No, no. Eda loves the human. She would be distraught if something happened to her.

“Human?” She calls out in a dry whisper, pushing the door open. There is no sign of any life, only curtains swaying in the night wind. Lilith swallows, fearing for the worst as she approaches the window.

Outside, a shape sits on the tiles of the roof, facing away from her, and Lilith exhales. The human hasn’t run away and is unharmed. She’s wrapped in one of her blankets out here. Lilith retreats from the room and descends to the kitchen to fill her glass. On second thought, she fills another one. Quietly she returns, standing outside of the human’s door again, but now she isn’t sure if it’s a good idea. She isn’t sure her presence is wanted, not after everything happened.

Lilith backs away, but she steps on an old board. Immediately the human turns her head, dark circles around her eyes.

“Who’s there?” She calls out, posture tense. Lilith swallows and steps into the moonlight.

The human’s shoulders fall and she turns away, setting her chin in her palm.

“Me, too,” Lilith answers, approaching the window again. She looks down at the two cups in her hands and frowns, and then sets one on the sill silently. The human glances back at her, her narrowed gaze falling to the glass. Her face softens, and then she reaches out to pick it up.

“Thank you,” she says. She takes a sip, and then looks back to Lilith. “Bad dreams?”

Lilith bites her lip uncertainly, her grip tightening on the cup before offering a single nod.

“Me, too,” The human says, turning her gaze back to the sky. She lifts her hand hesitantly before patting the spot beside her, a reluctant, unspoken invitation given only out of generosity.

Her immediate reaction is to reject the offer, but Lilith has been watching her every move around the human, out of fear for angering her sister. She quietly climbs over the sill and gingerly sits down as the human makes more space. The breeze is cool and refreshing, and the moon reflects beautifully in the sea below.

There’s silence for a minute as the two look out to the world beyond.

“Do you... wanna talk about it?” Luz asks softly. Titan, she shouldn't, but she wants to let the words free, to respond to the kindness. The human is too good.

“It must be horribly ironic and unfair for me to say this,” Lilith begins, words roiling inside, “but I… I dreamed I lost her. My sister.”

Titan, she said it. She said it out loud. Lilith can see the human shift in her periphery, but tears brim in her eyes and she doesn’t want to be seen crying, so she keeps facing away. Lilith pulls her knees to her chest as the wind turns chillier, and she shivers. A touch on her arm startles her, and she looks up to see the human reaching the blanket around her shoulders, another generous offering that makes no sense for her to receive. A single tear runs down her cheek as the human holds the corner towards her. But Lilith doesn’t want to be unkind. She takes the edge and pulls it over her other shoulder and shifts closer before pressing her face to her knees.

“Me, too,” the human repeats quietly as she turns her gaze away again. “You love her a lot, don’t you?”

Lilith’s lip quivers as she curls her fingers into fists. She wasn't the only one dreaming of losing Eda.

“Yes,” she whispers, “but I don’t know if I’m allowed to say that.” Not after cursing her, hurting her, capturing her. There’s another pause as her words sit in the air. She shouldn’t have come out here.

“I love Eda, too,” the human says, and Lilith thinks of her sister being dragged away, begging for Lilith to make sure the emperor didn’t hurt her apprentice, didn’t hurt Luz . She thinks of Eda’s last words before succumbing to the curse, of Luz reaching out to her sister as Eda exhausts the last of her magic.

“I’m sorry,” Lilith says, the words straining to escape past the ache in her throat, “I’m sorry.”

There’s another touch on her arm. She lifts her head and Luz is there, smiling weakly.

“I know,” Luz says, patting her gently. The moonlight glints off a welling tear in her eye.

Lilith nods and Luz’s hand falls away. The two turn their gazes back to the sky. 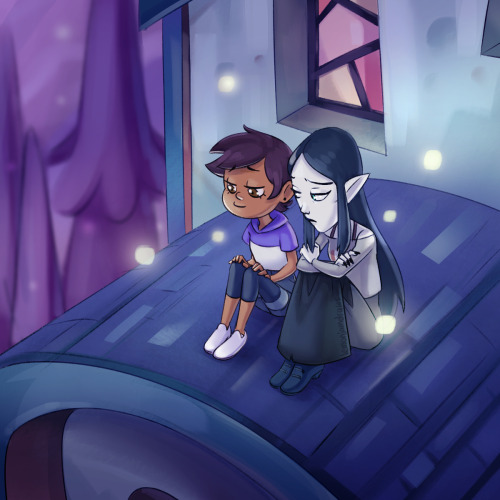 The sun hasn’t risen yet when Lilith blinks awake. Her eyes are still tired, of course, but she’s leaned against the outer wall by Luz’s window. And Luz is asleep, too, her face pressed against Lilith’s arm. Lilith sighs softly, putting a hand to her forehead. Looking around there’s two half-empty glasses of water on the open sill. It must have been hours.

Lilith bundles Luz up in the blanket and stands. It takes some trouble, but she successfully ducks back in through the window without knocking over the cups, and she sets Luz down amongst the pillows and blankets on the floor. The human looks exhausted, and it’s easy to guess why. Lilith closes the window and draws the curtain before leaving Luz’s cup on a table nearby. She hopes the human will be able to sleep for a little while longer.

Lilith glances back one more time, and then leaves the room.

sound of my eyeballs exploding
also artist credit is ME. i did the art yeehaw