can i go where you go

Apollo Justice has rotten luck: he actually wins the grand prize for a mail-in contest, but It's a couple's getaway to a fancy ski lodge in the mountains and Apollo is aggressively single. With no one to go with, Apollo offers them to Klavier since surely, a rockstar would be able to find a date before then, but Klavier has a better idea—they go together and pretend they're a couple. That way, they both get a vacation, plus free food and wine.

And well, Apollo's never been one to pass up free food.

Hiiii! Happy klapolly week!! I've been working on this fic since November 2020, which is why it's set during winter even though I'm releasing it in June... it just be like that ig.

This fic is finished and will be updated every Friday @ Noon PST according to this schedule:

This fic is also illustrated by Ang, the amazing stelllalights! Links to art will be linked at the bottom and embedded in the fic!

Thanks to Austin, Emma, and Krissey for betaing!

Chapter 1: prelude to a getaway

can i go where you go

prelude to a getaway

Apollo Justice has the worst good luck of anyone he knows. Probably the people he doesn’t know too.

It figures—it just figures—that the first time he wins something from all of the contests and giveaways he’s ever applied for (the mail-ins, the phone-ins, the email-ins that clog his inbox with spam), he gets the one prize he can’t use.

An all-expenses-paid trip to a cozy cabin up in the mountains including meals and (alcoholic!) drinks.

There’s just one problem—it’s a romantic getaway. For couples. And Apollo Justice? Apollo Justice hasn’t had a boyfriend since high school. Law school was demanding, okay?

What stings is that Apollo really needs a vacation. Like really needs a vacation. The Wright Anything Agency isn’t the obscure little firm it was when Apollo first joined, especially after Mr. Wright got his badge back. They have a steady flow of clients now, so he only has to clean the toilet once a week instead of whenever Mr. Wright feels like he’s been sitting around for too long.

But even with his newly steady paycheck, he could never justify a trip like this on his own. This is, like, a rich people trip and Apollo Justice is decidedly not rich people.

He looks forlornly at the tickets on his desk and lets out a small sigh.

“Apollo, if you keep sighing like that I’m going to start charging you $10 for each offense.” Mr. Wright doesn’t even look up from his desk.

Okay, so maybe it wasn’t a small sigh.

He’s just about to issue an apology when there’s a knock on the door.

“Hallo,” he says, flashing a smile meant to flatline a tween girl’s heart in a matter of seconds. “I’ve come for the Mark Polo case files. If you have time?”

Mr. Wright stands to shake his hand. “Good to see you, Prosecutor Gavin.” Gavin takes it, but Apollo can still feel the tension between them: civil, but like they’re unsure if they’re allowed to truly be friendly.

Gavin sets his sights on Apollo next, hands in his pockets, debonair smile unsheathed like a sword. See, this is why Apollo doesn’t like seeing him unexpectedly. He likes Gavin just fine, he’s a nice enough guy, but Apollo always needs to brandish a shield around him. He’s got a smile that can gut a man and Apollo has shit to do today.

“Ah and how are you, Herr Forehead?” Gavin says, leaning over Apollo’s desk to look at him at eye level. And hell, would it kill him to button up his shirt? “Living up to your namesake, I hope? Doling out justice and the like?”

“I’m doing fine, thanks,” Apollo says, already looking away. He is not immune to blue eyes.

“Could you help me get—oh.” Gavin grabs the getaway tickets off Apollo’s desk. “Are you going on a trip?”

Apollo swipes the tickets out of Gavin’s hands and shoves them in his pocket. “No, it’s—it’s nothing. Mark Polo, right? Come on, I’ll get it for you.”

He rushes into the file room, berating himself while Gavin saunters behind. Why were the tickets even out on his desk? Oh, right, because he was having a pity party. Still, he should have kept them in his bag after he got his mail on the way to work this morning, and now Gavin’s seen them and who knows what he’ll think.

Not that he particularly cares about what Klavier Gavin thinks.

They’re in the file room and of course Polo is on the top shelf and of course Apollo needs to find the stool to get to it in front of an actual, literal rock star. Fantastic. Just a typical day of being Apollo Justice.

Gavin is quiet as Apollo looks through the binders, which, frankly, he’s thankful for. Better Gavin be silent than spout some clever line about Apollo’s short stature. But the silence doesn’t last long.

“I didn’t know you were spoken for, Herr Forehead,” Gavin says. “Is it new? Who is the lucky person?”

Has this guy always been this nosy? Apollo groans in defeat. Might as well tell him.

“No, I’m not spoken for. I won the grand prize in a mail-in contest but it’s a couple’s retreat so I can’t go,” Apollo says.

Gavin tilts his head. “If you’re single, why did you sign up for the contest?”

“It wasn’t the only prize. Third place was a nice food processor…”

“So you entered a contest hoping for third place?” Gavin says.

Apollo snaps the binder shut and picks up the next one. “I just enter a bunch of stuff and see what sticks.”

“With all the work your office has been getting lately, I’m surprised you even need to bother with them,” Gavin says, leaning on the bookshelf.

“You kidding?” Apollo scoffs. “Yeah, the money situation is better, but I was barely staying above water before. I’m not worried about eviction anymore but I still got rent and bills to pay. I’ve upgraded from instant noodles to actual ingredients, though, so that’s nice.”

Gavin shuts up at that, which Apollo kind of hates. Ugh, he’s probably pitying me, or whatever.

“So what are you going to do with the tickets?”

“Give ’em away, I guess.” Apollo shrugs. “The rules specifically say it’s for a couple.”

Gavin hums. “There’s no one you can go with? Just as friends? Seems a waste not to go yourself.”

Apollo’s thought about it, if he’s honest, but his options are basically his coworkers and that’s a no. He wants to go to get away from work, not take it with him. Maybe if Clay were still around, but he isn’t so…

“Naw, my social circle is pretty much this office and it’s not exactly the relaxing weekend of my dreams if my coworkers are there,” Apollo says. “It’d be nice though…”

“Cozy cottage in the snowy mountains, drinking hot cocoa next to a fire, sleeping in, reading for fun,” Apollo says with another big sigh. Luckily Mr. Wright isn’t nearby to hear it.

Gavin crosses his arms, then raises one to tap his chin with his finger. “Ja. Skiing, no cell reception, no LA traffic. Sounds perfect.”

“Yeah, it does,” Apollo says and, finally, he finds the Polo case file. “Here’s this." 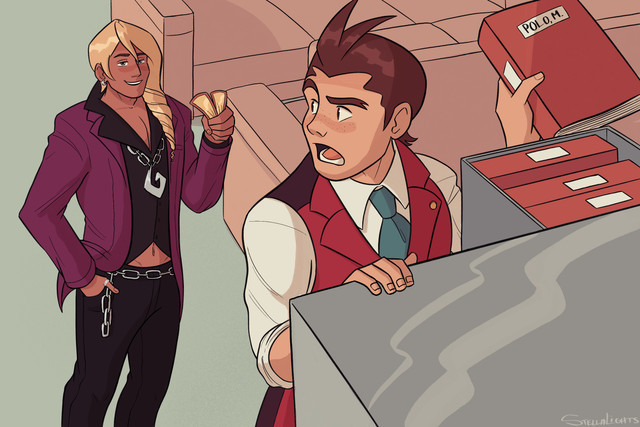 “Don’t worry about it,” Apollo says, stepping off the stool and putting it away. As he does, he gets an idea that makes him sick to his stomach, but somebody might as well enjoy his winnings. “Hey, if you want the tickets, you can have them. I’m sure you’d be able to find someone to go with.”

Gavin blinks in surprise. “You want to give them to me?”

“Well, it sounded like you’d enjoy it,” Apollo says, rubbing at his bracelet. “Do you think you could find someone to go with you?”

Gavin shakes his head. “Nein, Herr Forehead. You won them, you should go. You deserve to go. By the look of those dark circles under your eyes, I’m sure you’ve been working overtime.”

That’s true enough, and Apollo does want to go, but he’s already run through his options.

Gavin snaps his fingers. “Think about it. We both need a vacation and you need a plus one, so why not?”

“But we’d have to pretend to be a couple!” Apollo says, and is it hot in here? It feels really hot in here.

Gavin shrugs. “If it’s a retreat for lovers, then that means they’ll give us plenty of alone time. At worst, we’ll have to hold hands a couple of times, maybe come up with a backstory. Small price to pay for such an escape, ja?”

Oh, god. That actually makes sense. Apollo needs it to stop making so much sense.

“The cabin’s only going to have one bed,” Apollo says, pressing his index finger to his brow.

“I promise not to hog the blankets,” Gavin says, crossing his heart. “But honestly, I used to tour with three other stinking men on a tour bus. We shared hotel beds all the time. It’s not a big deal for me. But if you’re uncomfortable with the idea, no pressure. Just thought I’d offer.”

Apollo is of two minds: first is the logical and practical one that says nothing good will come from being in proximity to this man for four days and second is the dumb, stupid monkey brain that’s screaming ahh but I wanna!

Gavin is looking at him expectantly and Apollo’s got to choose. And dumb, stupid monkey brain is making a compelling argument at Chords of Steel decibels.

“Then, it’s a date.” Gavin outstretches his hand and unsheathes his smile again.

Apollo’s logical mind calls him a dumbass, but he shakes Gavin’s hand anyway. “It’s a date.”

Thanks so much for reading! If you enjoyed, please consider leaving kudos, commenting, and/or retweeting this fic's thread here.

Link to ang's art here! Please show her some love especially since ao3 KILLS the quality. Thank you so much bestie it came out amazing!

Links: main twitter | aa side acc | my other fics