"Initially, he wanted to be a pirate." - Mycroft Holmes, A Scandal in Belgravia

Sherlock is six years old when he begins to travel the world collecting treasure.

Before he left for Eton, Mycroft built Sherlock his very own pirate ship.

(That is to say, Mycroft commissioned Sherlock his very own ship, and Mr. Norbury, the groundskeeper, built it in a shady, oft-ignored pocket of the Holmes estate while Mycroft sat nearby overseeing the construction.)

Sherlock’s ship was an expansive schooner with two masts and two decks. The upper deck had a trap door that went to a hidden room in the lower deck (an optical illusion, the perfect place to hide, with no one to know where to look but for Mr. Norbury, whose lips were sealed). The lower deck proper had a closet filled with blankets and sheets, proper clothing for swashbuckling, a hammock for sleeping, a shelf for books (Robinson Crusoe tattered, pages soft with use; Treasure Island with its spine broken in three places; The Voyage of the Dawn Treader coverless, pages torn), and a lantern with light bulb. (“A real pirate ship would have candles, Mr. Norbury.”) (Well, Mr. Sherlock, this is a real pirate ship, and it has electricity.”)

When the ship was new, Sherlock crowed to find a barely-rickety plank beneath his hammock, and when he pried it up he found an empty trunk he could (would) fill with treasure. There was also a walkie talkie and a message in a bottle.

I hope this missive finds you in good health, and that your journey proves illuminating and stimulating. Do be careful, my good man. Heaven only knows what perils you will encounter in the long months and years ahead.

Adventure on the high seas are the truest test of a man’s mettle, and I am confident that yours is, and has always been, up to snuff. Sometimes, the tumult of the seas mirrors that of the mind and heart — there is nothing for it but to gain one’s sea legs, to ride the crest of each wave, to know that the tide will change.

Should you require anything on your voyage, I am, as ever,

PS: What shall we call this fine vessel? Best not to try Poseidon’s temper without a name.)

Sherlock named his ship the Borealis. Three months later, Mycroft left for school with one last run of his hand through Sherlock’s hair, and Sherlock spent the night in his hammock not crying.

(Mummy increasingly lost in her formulas, her hands marked with ink, her gaze unfocused, her attention scattered.)

(The big house echoing silence like a tomb, heavy in Sherlock’s ears.)

(The first treasure in his trunk was Mycroft’s pocket watch — a gift from Grandfather before he was burned in a special room.)

The Borealis had no first mate. Sherlock had thought that Mycroft might eschew Eton for the honour, but Mycroft only sighed and adjusted the tricorn hat on Sherlock’s head. (“I would make an abysmal first mate, Sherlock. Why don’t you ask Rupert?”) (“I’m not a baby, Mycroft.”) (“You look like one, making that face.”) Rupert became ship’s cat, and when doors slammed or glasses broke or voices carried through the walls of the house, Rupert followed Sherlock to the Borealis, even in inclement weather.

Every night, the walkie talkie crackled.

(“Come in to port, Captain Holmes. The seas are choppy tonight. Over.”)

Winters were too bitter for seafaring, Mr. Norbury said, and so the Borealis was covered for the season. Sherlock spent the coldest months underneath his bed, with a torch and a book, or alone in the home theatre, the whir of the film projector forgotten as Errol Flynn swept about the screen lashing his sword about, saving damsels, freeing slaves, triumphing over tyranny. Sherlock’s own sword was merely a foil, blunt-tipped and hardly suitable for fending off Rupert, much less enemy combatants. He didn’t fancy saving any damsels, and he didn’t know any anyway.

(Alice Maberly who lived down the path from the Holmes estate was the only girl Sherlock knew, and she once sat on his head. Nanny had scolded him for coming home with his hair in a tangled mess, unknown substances smeared thereof, but all of this led to a single conclusion: Alice Maberly did not require Sherlock’s services.) (Mummy did not notice his hair.) (Father snarled, “Bloody shave it off if you want.”) (Nanny’s hands, gentle, careful, combing through for interminable minutes though she did not speak nor reach for scissors.)

When the Borealis was open for the season (black sails, red flag with black “H” and slashing sword as designed by Mrs. Filby, a seamstress friend of Mr. Norbury’s), Sherlock could most often be found at the helm, consulting his compass, barking out orders.

(In his trunk, Grandfather’s pocket watch, a locket of Mummy’s with Mycroft’s image in one side and Sherlock’s in the other, a crystal chalice from the cabinet, coins from Father’s desk — Greek and French and Japanese, a bit of fine brown hair with a ribbon tied round it salvaged from the false bottom of Mummy’s vanity, an ornate key, a music box with a one-legged ballerina, a bit of Mycroft’s baby blanket, the bow to Mummy’s dust-collecting cello, physics books, chemistry books, anatomy books, rude books from Father’s closet, paper journals in Father’s script with fading ink, a gilded clock, a broken radio, a cracked mirror, Mummy’s engagement ring, Mummy’s baby pictures, Mummy’s parents’ wedding photos, Mummy’s Postgraduate certificate, Mummy’s notes on Time, Mummy’s slip, Mummy’s mascara, Mummy’s perfume, Mummy’s monogrammed handkerchief, Mummy’s jagged fingernail clippings.)

Sherlock was in India when the solicitors were frequenting the house.

Sherlock was in Siam when the movers parked in the drive.

Sherlock was in the Philippines when Father arrived off the starboard side of the Borealis in a little rescue boat.

(“Ought not to be in open water with such a small boat, Midshipman Holmes.”)

Sherlock was halfway to Australia when Mycroft came home for the weekend.

(“First mate has to scrub the deck. And read to the Captain.”)

Sherlock was en route to Japan when Mycroft left again.

(“D’you ever meet the natives on your trips round the world, Captain? Over.”)

(“Even Robinson Crusoe had Friday, Captain Holmes. Over.”)

Sherlock was almost to Hawaii when Mummy visited his ship for the first time.

(“There are no girls allowed, but I suppose you can board.”)

(“You’ll have to stand at the bow and watch for land. Kapaa will be visible soon.”)

(“I have to go away for a while. My research — I can’t do it from here, do you understand? There are some resources I simply cannot access. So you have a choice.”)

(“Dark clouds in the distance, do you see them?”)

(“You can go to London to stay with your Aunt Margaret. I’ve found a suitable day school there.”)

(“Or I’ve found a place that boards young men your age in Wales. Would you like that, Sherlock? To board like Mycroft does?”)

(“I will steer this ship into a glacier!”)

(“There aren’t glaciers near Hawaii, dear.”)

When the time came, Sherlock locked his trunk, dragged it painstakingly across the estate in dead of night and left it at Mr. Norbury’s door. He left on top of it a clear glass bottle with a message inside.

I thought to reach Antarctica without incident, but I failed at my post. I failed the mission and I failed my crew. There is nothing for it now but to submit to my fate with dignity.

A captain always goes down with his ship. 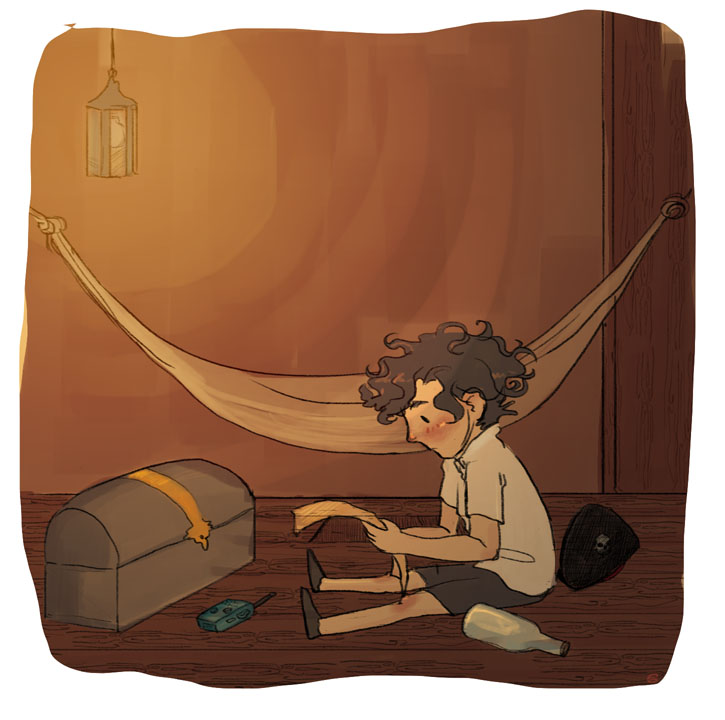