"Would you like to be carried like a princess?" With striking beauty, chic, filthy rich, and a charming persona...Luna was considered a Prince of the Special Fire Force. Even if Luna was in fact a girl. Considering her high position she held in society, the elite soldier found herself part of Company 8, a dump of a company compared to the other ones.

Luna couldn't help but be attracted to that place, especially when Captain Obi was there...a man she grew to respect after her first encounter with him. But even so, that didn't push her off from her main goal. 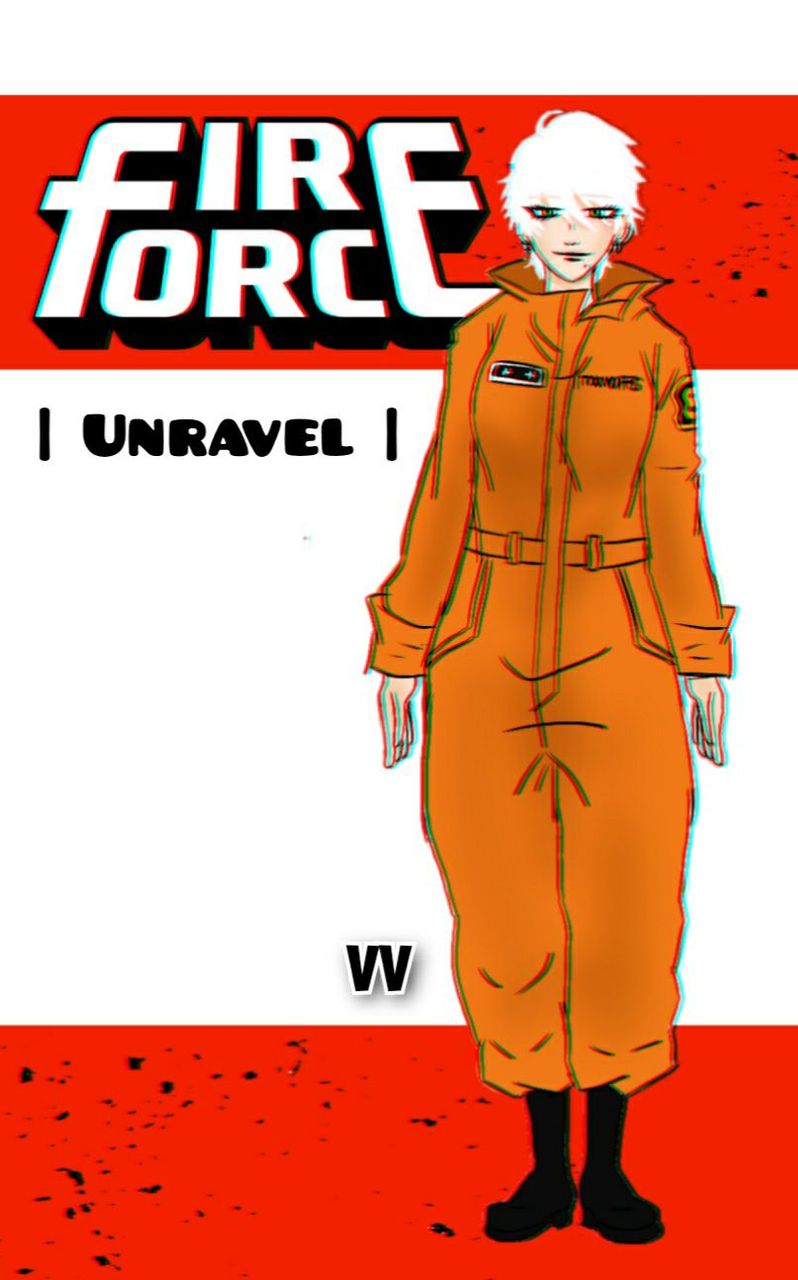 A long time ago, mankind was touched by the planet's anger...and the world was engulfed in flames. It was the Day of the Cataclysm. The flames burned ferociously, with the intensity threatening to incinerate the places mankind lived. the languages they spoke, and the culture they had built up.

Within the world now...the flames have yet died down. As it is one of the many causes of death in the world.

"Yes...I will be discharged today..." A rather teasing yet soft voice resonated through the empty halls of a local hospital in Tokyo. Their tall figure stood by a phone booth of the hospital, as the rays of light outside the windows manage to illuminate their face...urging them to look up from the sudden blaze. Upon placing their mint-like eyes towards the sun, they flinch by its shine as their pale locks shimmer even more. Though their attention was brought back towards the phone once again.

"Hm? Me?" A chuckle makes way out of their lips, churning into a smirk by the words that perked on the other line,"Of course I'm fine Captain~ The doctors treated me very well here~"

They laugh after this, earning a sigh from the other line, they possibly have gotten used to their flirty remarks.

"Oh...now that I remember..." They leaned forward towards the booth, making sure to be careful not to put too much pressure where their right hand was, cast tightly as it was rested on an arm sling, "Isn't that kid with the devil's footprints joining us soon?"

Mint-like eyes narrow, as a smirk makes way towards their cheeky face, seemingly amused by whatever the person was saying on the other line of the phone.

"Ah...it's today~?" Their eyes glint slightly at this, licking the tip of their lips in a sly manner.

"Then I can't wait to meet him in person~"

Shinra Kusukabe-- also known as Devil or Devil's Footprints-- was a third-generation user...someone who is able to adapt their own flames without any assistance from existing flames. His ability came from his feet, hence the nickname that many gave him.

The young man came out fresh from the Academy and has been accepted by one of the Special Fire Forces, Company 8. A rather small company with very few members hastily put together. But despite that fact, the company performed well with each other.

Shinra was the newest member added at the said company, welcomed by his new team. One by one, Company 8 introduced themselves to the newcomer, since they will be fighting alongside the boy in their upcoming missions. Obviously, the crimson eye boy was nervous, but he was happy that he was able to take one step into completing his goal, one in which he promised to avenge for his family that he once cherished.

Company 8 guided the boy with their thorough plan and the purpose of their existence. They wanted to uncover the truth behind human combustion and hope to overcome it in order to save the remainder of lives. Their goals aligned with the boy's goals as well.

'I'm going to be a hero...No, I will become a hero--!' Though his monologue was disrupted when the door suddenly busted open, startling everyone by the sudden abruptness. They all turn, blinking once they saw who the person responsible was.

Shinra's eyes widened, recognizing the person before him, 'That is...!!'

A cheeky grin makes its way towards the newcomer's face, now taking in a few steps inside the office...not bothering to greet her subordinates and went straight towards the additional member of Company 8.

'She is...!!' Shinra holds in his breath, as a nervous smile perks up his lips when they leaned forward. With this, he was able to clearly see his superior's face.

Just as the rumors had it, their beauty was remarkable...hard to even describe it by how beautiful they looked. Short pale white locks, ruffled yet so elegant looking. In which contrast with their mint-like eyes, that seem to be sly. And their most notable feature was the beauty mark on the left side, below their lips.

'The Prince of the Fire Force...!! Luna Sato...!!' Shinra concludes, amaze to think that the said Prince was in fact a woman. He now understood why many nicknamed her that way since she was so breathtaking. It was hard to imagine someone like her existed. 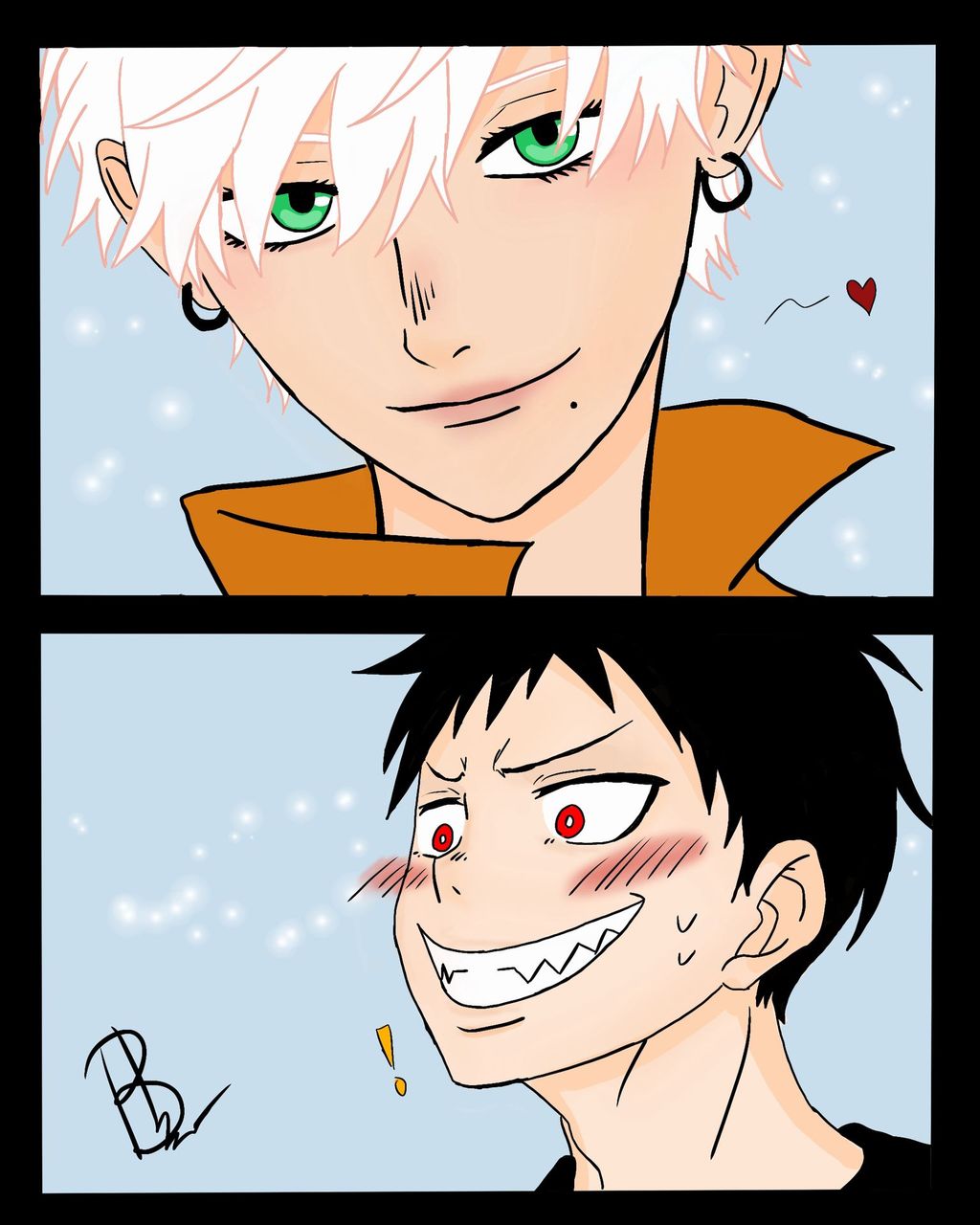 "My~ You're really cute huh...Shinra Kusukabe~" Her words tease, tilting her head a bit...causing the boy's face to redden by her compliment as a nervous smile makes way to his face. This was the very first time someone has ever praised his looks, especially when he was smiling this way.

"Cut it out Sato...you're invading the boy's personal space," The Lieutenant, Hinawa Takehisa, warns...his eyes piercing dangerously where she stood. As always, she was flirting on sight.

Luna pouts at this, now settling her attention where Hinawa was, "Aw c'mon~ I can't help myself since he's so cute~"

Hinawa deadpans despite his poker face expression, "You can be thrown to jail with those kinds of words against a minor,"

Seeing that the two were just about to bicker back and forth, the Captain decided to intervene before things can get out of hand between the two. He raises his hand, smiling towards Luna, "Ah! Luna! How's your arm..?"

Luna blinks towards her captain, before looking down where the cast arm rested, "Oh. Well according to the doctor, it won't be long until I take off the cast. For now, I'm able to do some work, though sadly I won't be able to attend any of the missions until my arm is fully healed..."

Shinra was just now realizing her injured arm, 'Huh...? How did she get that?'

"Well, I'm glad you're back on board with us. Just take it easy for now," Captain Obi grins, flashing a thumbs up. The two other fire soldier girls nod along with the Captain's words, smiling towards the white-haired soldier.

"Captain's right!! Just tell us what you need and we'll lend a helping hand!" Maki beams, along with Sister Iris who perks beside her, "We'll be there to help you,"

Luna flashes them a close-eye smile as if pleased to hear those words from her subordinates, "Thank you, guys...I'll make sure to be careful~"

They all seem to be glad that their fellow soldier was back, all but Lt. Hinawa...whose cold expression never wavered as he continues to analyze Luna's expressions. Unlike the rest of them who trusted Luna without a doubt...Hinawa thought otherwise. He was not one to filter his thoughts, and he made it clear to Luna about his feelings towards her.

The halls of Company 8 were currently vacant, and considering how late in the day it was...no one was really hanging around this specific area. The white-haired soldier was just planning on heading out when she heard her surname being called out from behind.

There was no need to guess the voice, already aware of who called for her.

'What now...?' Luna narrows, inevitably rolling her eyes before turning around with a smile, "Did you need something Lieutenant?"

Hinawa had his poker face on, so it was hard to read his expression. And it was much harder since his glasses seem to glint white by the setting sun from the windows beside them.

"Your arm..." He starts, his eyes were now visible to her to see, "The roof of the house fell and by protecting Sister Iris, you blocked the roof with your arm. The damage itself caused your arm to handle a severe bruise...possibly a broken bone due to the impact..."

Luna says nothing, letting Hinawa continue, "...but with experts of the field...the recover on the arm should have definitely reduced to at least 2 weeks at most. So then...why did it take 7 weeks? Not to mention--" His eyes then drop where her arm rested on the arm sling, "--the fact that you still need to rest despite taking those weeks off...seems a bit off to me,"

'He's sharp...' Luna mused, though her expression did not change. Instead, he pretended to come off as confused, "I don't understand. Are you accusing me, Lieutenant?"

"Of course. Ever since you stepped foot in this Company, I have always suspected you. Why would someone as rich and influential as you join our dump of a Company?" Hinawa narrows, never once sugar-coating his words, "You also tend to leave without any permission...and whatever it is you're doing...you leave no trace behind..."

'He really is damn sharp...' As much as she wanted to click her tongue in annoyance, Luna had to maintain her cool. He was caught on, but Luna would continue to stay oblivious towards Hinawa's accusations.

"Wow Lieutenant...those accusations are a bit hurtful don't ya think?" She smiles, though of course, the male did not buy her act.

"Just as long as you don't do anything that will harm Company 8, I won't intervene," With those final words, the Lieutenant made his departure, not once turning to look back at the Luna. Once he was out of sight, Luna lets out a rather irritated sigh...glaring at nothing, "Damn...sooner or later he's going to find out..."

She then reaches over to ruffle her already messy white hair, irked but somewhat glad that he didn't further say anything else.

'Looks like I have to be real careful not to get caught...'

Thank you for reading!!

queenbri242 as well as 6 guests left kudos on this work!