The Customer is always ... Weird

Castiel goes Christmas shopping, (point of view of a shop assistant trying to help him buy Dean the perfect gift). 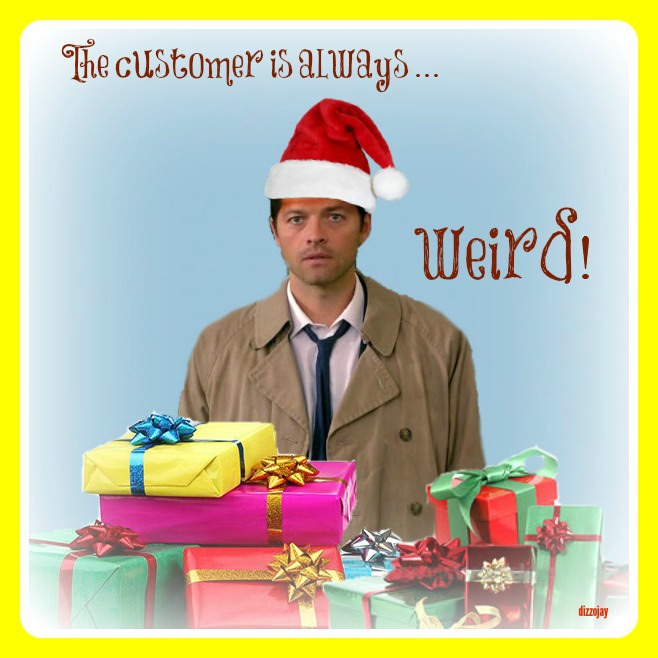 It's been a busy day here at Main Street Department Store. It's two weeks before Christmas, and don't I know it!

I feel wrecked; my feet are aching, and so's my back - along with pretty much every other part of me. I'm hot and exhausted, but it looks like the Christmas shopping rush is dying down for today – finally!

It's 7.45 pm. Fifteen minutes - fifteen glorious minutes - and then I can go home; I think I've earned a glass of wine tonight.

Closing my eyes, I stretch, rolling my neck to try to ease some of the tension out of my shoulders; damn, that feels good.

Although when open my eyes, the tension pings straight back in there, because I do a double take; somehow, right across the counter in front of me, there's a man standing there. Where the heck he came from, I've no idea. He's got this shock of jet black bed hair and he's staring at me with these big soulful eyes – jeez, I've never seen such deep blue eyes, and sad too - he looks like someone's just run over his puppy.

The other thing I can't help but notice is this stupid trenchcoat he's wearing. It certainly isn't one of our lines - it looks like it was made to measure for Quasimodo's little brother.

Oh well, I guess I'm still on the clock for another fifteen – no, make that fourteen - minutes, so I'd better see what he wants.

"Hello sir," I flash my most professional smile.

After a few seconds during which we stand and stare expectantly at each other, I decide that this one's either the strong, silent type or the 'afraid of women' shy nerdy type - I suspect the latter. Either way, I need to move this along.

His shoulders appear to slump a little as he answers; "I do not know."

D'you know what? Forget the glass, I'll just have the bottle.

I stifle a sigh, dredging up every interminable minute of customer care training I've ever endured, and try a different tack; "what can I help you with, sir?"

A hint of a relieved smile plays on the guy's face. "I would like to buy a Christmas gift for my friend," he states bluntly, adding a shy "thank you."

"Okay," I begin hesitantly, gesturing around the ten thousand four hundred and twenty seven different items of stock we have on display around the store (I learned that in customer care training too); "have you seen anything you like?"

"I understand that the purpose of buying a Christmas gift is that it should be something the recipient likes, not the purchaser," he replies uncertainly.

"Uh, well yes, but …" I begin, floundering to make my point understood; "but if you know the friend well enough, then you'll know when you see something that they would like."

His brow furrows into a constipated frown as he ponders on my explanation. God help me, but I'm starting to feel sorry for him.

"Okay, so let's start at the beginning," I suggest as brightly as I can manage; "is your friend a man or a woman?"

"He is a man," he responds confidently; "his name is Dean."

"Okay," I reply, "that's good, that narrows it down for us. And you and this Dean - are you close friends?"

"So," I ask; "how about clothes?" I gesture toward the sign that points toward mens' outfitting; "what sort of things does Dean like to wear?"

He pauses, thinking far harder than I would have thought necessary for such a simple question.

"He likes to wear T-shirts and jeans," he eventually responds with a triumphant nod.

Well, that was hardly worth all the brainpower he committed to it.

"Sometimes," he continues out of the blue; "he has to wear costumes. He doesn't like doing it, but his brother makes him do it because it is more authentic when they have to go out and probe people."

There's a brief moment's silence while my mind tries to process the direction this conversation is heading and fails miserably. All I know is that one bottle of wine won't be nearly enough.

"But my true bond is with Dean;" he continued; "I gripped him tight and raised him from perdition."

I know it's rude to stare, really I do, but I just can't help it.

I clear my throat before attempting to continue our conversation. "What about something personal then," I ask, choosing my words carefully; "might Dean like that?"

He cocks his head like some kind dopey Labrador; there's that furrowed brow again. Really? Am I speaking Swahili?

"I do not know what you mean by personal," he murmurs, those vivid blue eyes boring into me like he's trying to read my thoughts – God help me if he did.

"I know Dean is fond of his personal space;" he explains, completely not getting what I just suggested; "he is always shouting about it, particularly when I get too close; like the time he was in the shower and …"

"Okay, OKAY, right, yes … no," I squeak; "I meant personal from you to him, like jewellery – a watch or something!"

"Right," I sigh, resisting the urge to roll my eyes; "of course he does."

I glance at my own watch. Has only four minutes gone by? I feel like I've aged five years.

"What about music?" I ask, wincing at the edge of desperation creeping into my voice; "perhaps some music that he likes?"

The guy nods approvingly at my suggestion, and my hopes rise briefly.

"He likes rock music," he announces; "he listens to it when he's in his baby."

"His baby," they guy repeats, as if I should know exactly what he's talking about; "she's forty seven years old and black and Dean thinks she's beautiful." A faint smile crosses his face; "she is quite beautiful, I guess. Dean's brother often gets in his baby too. So do I, but I always have to go in the back."

For the first time, choking on my tongue becomes a very real possibility. Ten thousand four hundred and twenty seven different items of stock and I can't think of a single thing that I could recommend to this guy.

He's standing there looking at me so hopefully, like I'm his font of all knowledge.

There's not enough wine in the world …

"Movies?" I suggest weakly; "or TV shows he likes, could you buy him a box set?"

"I am not familiar with a lot of the TV he watches," he replies; "it is difficult for me to comprehend." He shoots me a look of such intensity, I feel my heart sink; "I mean, I can understand that the lady would remove all her clothes before the pizza man arrived, so that she wouldn't get tomato stains down them, but surely the hot pizza topping would have scalded her while the pizza man was eating it off of her …"

"Toiletries?" I almost shout; "cologne or fragrance or after shave lotion, does he like that sort of thing?"

I get the furrowed brow again; "He does wear a fragrance," he eventually replies; "the smell is not unpleasant, its scent suggests a molecular structure based on musk and sandalwood with a hint of leather and citron. I saw him applying it to his face that time in the shower when I …"

"Okay, okay," I snap, waving my hands in front of his face to try to get his attention; "I get it."

"And he uses an antiperspirant called 'Stud', which he sprays under his arms." The guy continues, seemingly oblivious to my desperate attempts to get him to shut the hell up; "it has the scent of cinnamon and pine needles. I remember that because after he yelled at me about his personal space, he threw the can at me and it left a bruise on my forehead."

Feeling my will to live slipping away, I nod silently. The English language has failed me miserably in this conversation from the far side with trenchcoat guy, so I give up on using it.

"It may not be wise for me to select a fragrance for a gift, however," he continues, presumably not hearing the whimper that I let out, despite myself. "I believe Dean's skin must be very sensitive; when I gripped him tight, I did not realise how fragile he was, and I left handprints on his skin which did not fade for a very long time. That was at the same time that he said I had restored his virginity, but I do not know how that could have happened because I did not grip him anywhere near his …