Aziraphale opened Crowley right up with her nimble fingers, moving the doublet aside to reveal what Crowley kept close to her heart: an undershirt of bright angelic white. As if it were some sort of favor from Aziraphale, her colors kept secret beneath the dark clothing Crowley showed to the world.

Written for the Globe scene in the Cold Omens Zine, with art by Al (Fledglinger) and fic by Dannye.

Thank you to the mods of the zine for all their hard work! 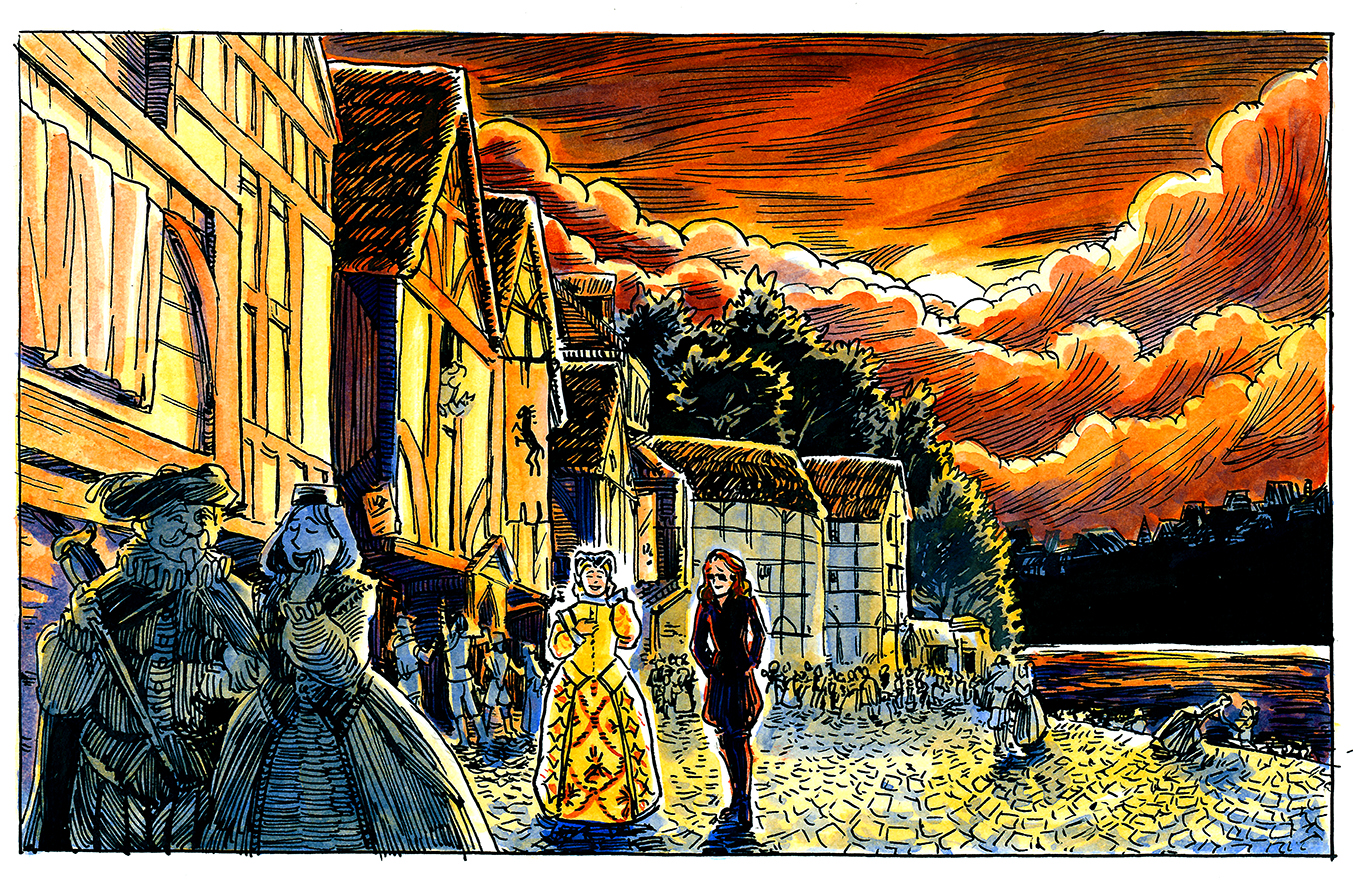 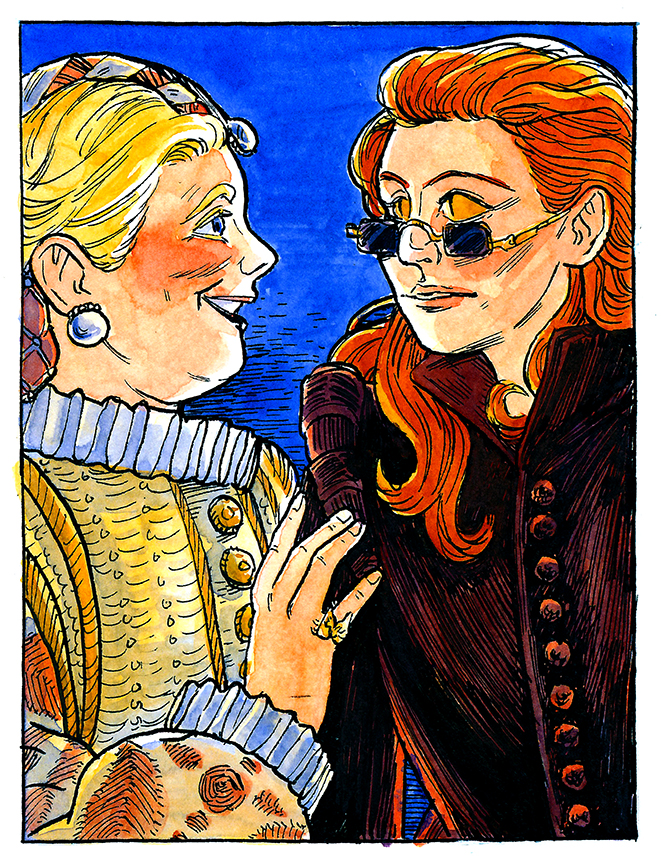 Aziraphale’s bodice was the exact shade of her eyes: a pale, rather icy blue. Her attifet hat and kirtle underskirting were gold, her gown white. She was a vision. Aziraphale’s fashion sense was unique at best, but she knew how to choose what flattered her.

Or perhaps it was just that Crowley found the angel beautiful no matter what she was wearing.

It was a little harder to see Aziraphale now that it had gotten dark outside. But Hamlet was a very long play, and night had come over the Globe Theatre while they were inside. Crowley felt a little bit disoriented with the daylight having stolen away, the outside now as dark as her glasses. But really that only made it easier than ever to orbit the warm sun that was Aziraphale.

The last time they’d been here, Aziraphale had asked Crowley to make Hamlet a success, and Crowley had. Aziraphale hadn’t even asked for this favor of Crowley’s with words, hadn’t done a thing except raise her eyebrows. But of course Crowley had agreed, because she knew if she did, she would get to see that imploring look turn into a smile. Aziraphale’s delighted looks were more than enough reward for miracles worked on request, and normally, they were all the reward Crowley would get.

Which was why she was surprised that Aziraphale had asked Crowley to walk her home along the river, from the dirty, hellish South side of the Thames where the Globe reined over a realm of thieves and actors, across the bridge to the angel’s quarters on the North. And Crowley was even more surprised that Aziraphale was now saying, “Oh, Crowley, this is really beyond even what I expected,” and not so much with that delighted look, but something deeper, darker.

Aziraphale shook her head, blond curls bouncing in the caul at the back of her neck. “Oh, you know. Damp. It’s nice to be back here.” Her eyes were still fixed on Crowley, unwavering, which was something Aziraphale didn’t often allow herself.

Crowley suddenly felt like a complete fool. Hamlet didn’t need to be this much of a success. Crowley had gone overboard with it. Aziraphale had pushed her into the favor with that pleading look, and Crowley had pushed right back, too hard.

Given the chance, Crowley would have done something extraordinary for Aziraphale every day until the end of time, but it was not a choice that was theirs to make. Aziraphale was right that Heaven and Hell would destroy them if they got too close. But Crowley was not good at staying on the right side of the line. She wanted to question, to push, endlessly wondering how much it would hurt to put her hand in the flame, wondering if there was anything in creation worth taking the pain for.

They’d shared stolen pieces of time together before, with Aziraphale’s soft breath on Crowley’s mouth, with her soft curves in Crowley’s hands. It never lasted more than a moment, and it could be years, centuries, before the pressure built up enough again for them to need to release it. Crowley was afraid of steering them here, but desperate for it all the same.

“I just need you to know,” Aziraphale said softly, looking up at Crowley with those pale eyes, “that you are appreciated.  Like Shakespeare said. The people on stage need to know they’re—”

Crowley shook her head. “We’ll never be on the stage, angel.” She pointed back toward the Globe where things were light and loud. “Never out there together.” 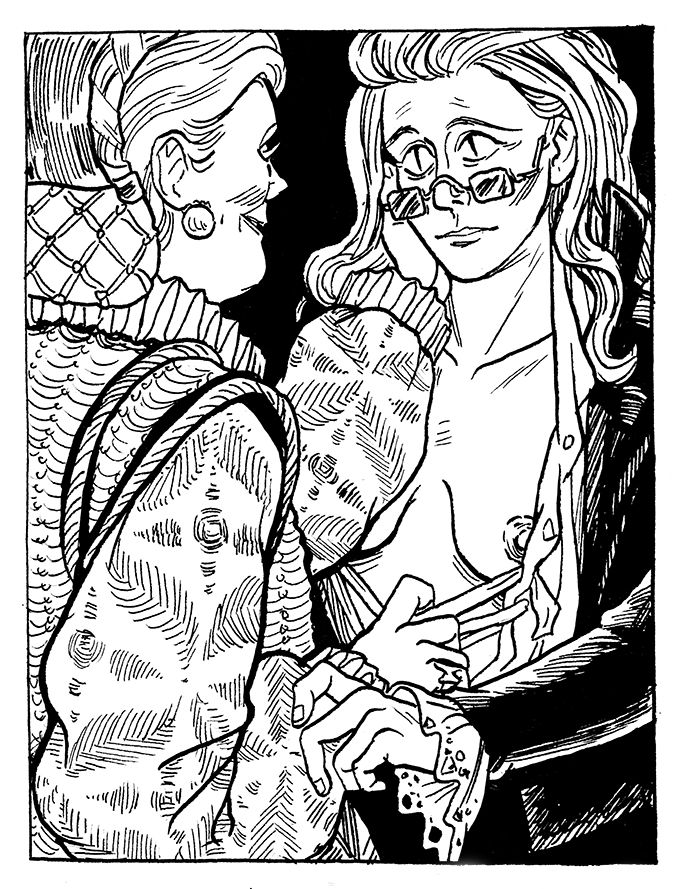 “That’s all right,” Aziraphale said. “I don’t really want to share you.” She laid her hand gently on Crowley’s shoulder, and then trailed it down her arm, over the dark doublet Crowley wore, tangling a little in the red hair that tumbled over her shoulders. Crowley liked the modern men’s fashions as much as she did the women’s, and wore whichever suited her mood. Today it was the doublet with black breeches cut with silver, black hose and canions on her legs, and black latchet shoes. There should have been a corset beneath it all, but Crowley’s clothing knew its proper silhouette and stuck to it without aid.

Crowley let Aziraphale back her into an alley, cold and dirty. There was a bit of panic in her— this was not a place for an angel. But Aziraphale was undaunted. “Let me show you,” she said softly. “Or you can tell me to stop.”

“Aziraphale— you know I’m never going to do that.”

It started very slowly. Aziraphale put her hand to Crowley’s cheek, tracing along the lines of her face. She followed the movements with her mouth, moving closer, and Crowley clutched her tightly, how could she not? Aziraphale was warm, the angel was blessedly warm always, and Crowley needed it, needed her, needed this to be real. Not just dreaming, not wanting with empty arms, but something touchable.

There were times Crowley wondered if she herself was real, banished as she had been from Heaven, ostracized in turn by Hell. Wondering on what plane she might actually live. Until Aziraphale would touch her again, and Crowley would understand that she still existed, at least to Aziraphale. And she didn’t need, didn’t want to exist for anyone else.

Aziraphale’s fingers started to work at the buttons of Crowley’s doublet. She didn’t remove it— there was so rarely time for that. But she opened Crowley right up with her nimble fingers, moving the doublet aside to reveal what Crowley kept close to her heart: an undershirt of bright angelic white, almost glowing in the dim lighting. As if it were some sort of favor from Aziraphale, her colors kept secret beneath the dark clothing Crowley showed to the world. It felt more revealing to let Aziraphale see that than when she uncovered the bare skin beneath it.

Crowley bit her own hand to keep quiet as Aziraphale ran her fingers over her breasts, caressing and teasing both. It felt like a touch of paradise in this infernal place. The air was full of the stench of animals kept for the purpose of violence, of the dark, clogged river, of disease and despair. But that was no doubt why Aziraphale had chosen this place. Occult and ethereal prying eyes would find it hard to focus on them here, with a fog of evil hanging over the whole place. And of course, the humans would hardly mind. So they both, for the moment, existed here on Crowley’s side.

Aziraphale’s hands worked the ties of Crowley’s breeches and hose, soft fingers slipping inside. The angel stood on her tiptoes for this, reaching deep into Crowley, taking them down a path that she knew would lead to Crowley’s pleasure. Aziraphale’s fingers were steady and sure, finding Crowley’s sensitive clit, working her open, gentle in that way that Aziraphale had, but firm and unyielding.

Crowley shook apart against the wall of the alley, and Aziraphale kissed her softly through it. 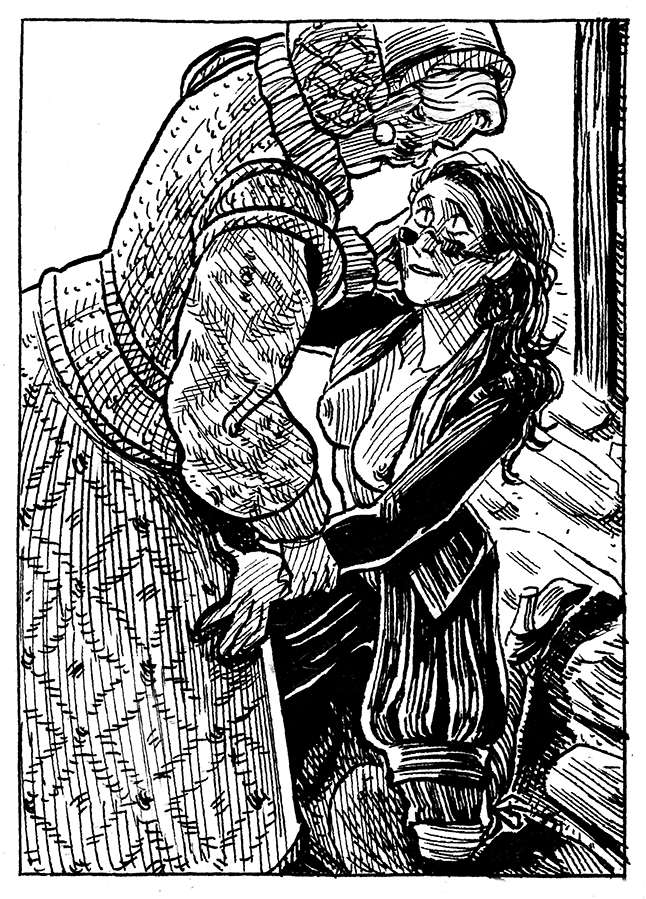 When she withdrew her hand, Crowley caught at it. “Angel, what do you need?”

Aziraphale looked melancholy for a moment. “Do you know you’re the only one who ever asks me that?”

Crowley told her the truth. “It’s the only thing in this world that I actually care about.”

It was easy to drop to her knees for Aziraphale, even easier than being in her arms. It felt right to offer the angel worship, to touch her reverently, to look up into her blue eyes from a place below. Crowley bunched Aziraphale’s skirts in her hands, the embroidered damask gown and gold silk farthingale, the layers of petticoat lace that crunched like dry leaves. Aziraphale was bare beneath her shift, from the top of the stockings at her knees right up to the pale curls between her legs. She was wet and easily opened, and loud.

Crowley moved back to see Aziraphale’s face, to offer the same amused admonishment as always. Aziraphale put a hand over her mouth, and Crowley could still see the smile behind it.

This time when Crowley moved in close, she let Aziraphale’s skirts fall down behind her. The light and noise dimmed, and she could feel only the softness of Aziraphale’s cotton shift behind her head. Aziraphale clutched at the skirts, lifting them slightly, but Crowley didn’t mind the weight of them across her shoulders. Here, she was hidden in an Eden all her own.

Crowley used her fingers to spread Aziraphale’s lips apart, rubbing her thumb lightly against her clit as she did. When the angel’s legs started to tremble, Crowley began to use her mouth. She licked into Aziraphale’s folds in a gentle rhythm, gradually increasing it until Aziraphale was panting above her. Then Crowley exchanged finger for tongue and sucked on Aziraphale’s clit.

The angel’s orgasm was glorious, and Crowley worked her through it, worked her all the way into another, and then Aziraphale’s legs buckled. Crowley caught her, moving out from under her skirts. Aziraphale was even more of a vision now, her face flushed, blond hair sticking to her neck. Her skirts were in disarray, petticoats rumpled, heavy damask folded back like a fan.

Crowley did what she had to, rearranging Aziraphale’s clothes. Aziraphale did the same for her, fingers slower to re-fasten than they had been to unfasten. Crowley’s white undershirt vanished from sight again. With that done, they were ready to meet the world once more as separate people. People who didn’t touch, who showed emotions only in angelic smiles and demonic miracles.

Someday, Crowley thought, someday maybe they would watch a revival of this play, not in a stolen moment, but in open, free hours together; not tucked away in the dark, but in full view of everyone on every side, existing on a plane that was theirs together. That was the only reward Crowley ever wanted. 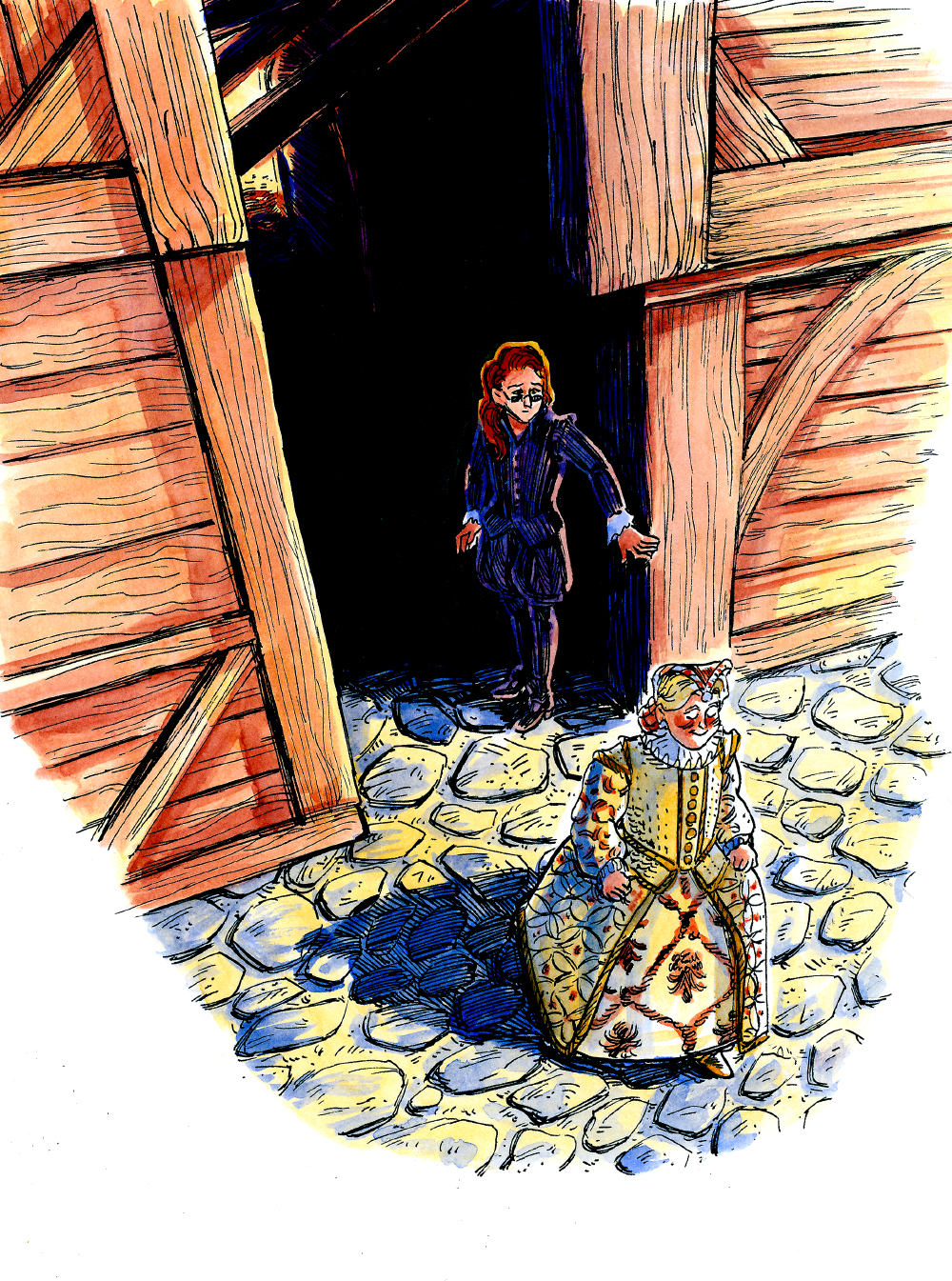 Thank you for reading! Comments and kudos are so appreciated! And please feel free to check out our other works.

Find Dannye at DannyeChase.com, on her Carrd and on her Linktree
Find Al at Tumblr | Instagram | Twitter