this feeling i have found at last

turns out i wasn't as done with these two lovestruck fools as i'd first thought. they're sickeningly sweet in this- consider yourself warned

Lena Luthor is twenty-five years old, and today is her wedding day.

Some people – naming no names, but, Lillian – have made no effort to hide their belief that eighteen months is far too short a time to go from strangers to fiancées, let alone spouses.

Lena would love to ask those same people whether twenty-five years of constant companionship, of access to every single thought and hope and fear and dream, of the unflinching and indisputable knowledge – straight from the source – that she is wanted, cherished, adored just as fervently as she herself adores, really sounds like this is all happening too soon.

She'd love to tell them that she would have married Kara when she was ten years old, right there in the middle of the van der Bilt's tennis court with Esmerelda's sour face watching all the while. Or that she'd have married her on the roof of her boarding school beneath a blanket of stars, in her college dorm with a wedding cake made of ramen, in the middle of Luthor Corp's board room with her brother's crotchety old VPs as witnesses.

She'd love to tell them that she'd have done anything, will do anything in the galaxy to bind herself to Kara, to demonstrate to the world that the two of them are as inextricably linked on the surface as they've always been within. That the rings and the flowers and the trappings are, ultimately, unnecessary. That she's been Kara's, and Kara hers, since the day she was born. That she'd marry her on any world, in any tradition, in any number of binding agreements just to say the universe may have tethered me to this woman but I choose her. I choose her, because I want to.

Lena would love to tell her mother all that. She never will, but it's a nice thought.

She smooths her hands over the silk of her gown. It's simple, by Luthor standards at least, but she loves it. Strapless and elegant, the clean lines hug her body down to where the material pools at her feet. She's just fixing the last of her jewellery in the mirror when a familiar voice sounds in her ears.

Andrea is busy babysitting Lillian until the last possible moment, Sam has gone to find the wedding bracelets, and Eliza has taken six-year-old Ruby for a pre-ceremony snack, so Lena is alone. Or as alone as she ever is, with that warm melodic voice echoing through her mind.

Darling, Lena chuckles, securing the back of the diamond stud in her ear and smoothing back her artfully styled curls. I can hear you outside the door. Just come in.

The voice in Lena's mind takes on an affronted air, and Lena can picture the indignant look on her soon-to-be-wife's face clear as day. All those years of sharing their every thought had accustomed Lena rather soundly to every shade and hue of Kara's moods, but no long-distance telepathy compares to the simple sweetness of being able to smooth the crinkle between Kara's brows with her thumb, catch her tears on her knuckles or kiss the smile from her lips.

But it's bad luck! her fiancée insists, and Lena shakes her head.

That's an old wives’ tale, she hums, gentle yet firm, straightening the plumerias in her bouquet. I love you, and I want to marry you, and I'll always love you and I'll always be glad I married you. Luck's got nothing to do with it.

She feels the presence at the edges of her mind soften, a little of Kara's anxious energy seeping away in the wake of her words.

The thought has barely formed in her own mind, barely even had a chance to shoot off into someone else's, when Kara's pushing roughly through the double doors and sweeping Lena into her arms.

Lena slots into them, into her. Chest to chest, hip to hip, Lena's nose burrowing against the down-soft skin of Kara's throat as the blonde's fingertips trace the bare skin of her neck and shoulders, careful not to disrupt her carefully arranged curls.

Mmm, I missed you.

The thought reverberates through Lena's mind, echoed a split second later by the reverential path of Kara's hands, the delicate press of her lips.

“We've only been apart a night,” Lena smiles, electing to use her words rather than her thoughts if only as an excuse to press them to the underside of Kara's jaw, feathered through with kisses. “But, I missed you too.”

“Good thing you can't ever really get away from me, huh?” Kara teases, knocking her temple softly against Lena's own.

“It is,” Lena hums, burrowing tighter into the warm cradle of her arms. “It's the best thing in the universe.”

In her mind, a voice that isn't her own chuckles. Okay, sappy.

It's my wedding day, Lena thinks back, indignant. I'm allowed to be a little sappy if I want to be.

“It sure is,” Kara breathes as she pulls back, hands sliding from Lena's collarbones down her arms to take her in. Her eyes widen, mouth dropping open. “Rao, Lena. You, you look so—”

The Kryptonian trails off dumbly, stepping back to admire her from every angle. Even the voice in her mind falls utterly, uncharacteristically silent and Lena feels her very soul smile with the knowledge that she's finally managed to shock her fiancée into speechlessness.

“Yeah,” she breathes, heart in her throat as she takes in the handsome cut of Kara's black tux, her smart white collar with the top three buttons left open, the subtle golden thread edging the flowering pattern at the jacket's hem and sleeves designed to complement perfectly the woven gold bracelet Lena will soon be clasping around her wrist forever. She swallows heavily, mouth running dry. “You, too.”

Kara steps closer again, reaching out to link their fingers in the whisper-small gap between their hips. Lena loves moments like these; gentle, quiet moments where their bodies connect as soundly as their minds, every part of the two of them utterly in tune and utterly in love.

We are, Lena thinks, squeezing the fingers entwined with her own. Are you nervous?

About spending my life with you? Not even a little. Kara's grin widens and she tilts their foreheads together, a soft breath sighing out of her at the contact. About tripping over my feet as I walk down the aisle in front of Lillian's death stare? Paralysingly.

Lena chuckles, air passing softly between them as they breathe together in the quiet of the airy room. How are you feeling? Kara thinks to her a moment later, stroking her thumbs back and forth over Lena's knuckles. Any last minute doubts?

The voice in her head is light, teasing, but there's an undercurrent of genuine uncertainty to the thought that has Lena pulling back and blinking her eyes open with a frown.

“I just, I don't want you to feel trapped into this,” Kara whispers, barely audible. Her eyes are wide and earnest, achingly sincere. “Because of our, you know, connection. I want you to be free to choose, Lena. I want the decision to be yours.”

Lena slips her fingers free, missing the warmth of Kara for only a moment before she's cupping her face in her hands, smoothing her thumbs along the proud arc of her cheekbones.

“Darling,” she whispers, as though the double whammy of hearing word and thought simultaneously may help hammer the truth home more efficiently. “I have never, for one second, felt trapped by you.”

“Our connection may have started things off,” she breathes, threading her fingers back into soft blonde curls when Kara nudges harder into the contact of her palms. “And, God, I don't know. That red string of fate may have been the thing tugging us toward one another from opposite ends of the galaxy, but everything we have together? Everything we've built? That's ours, Kara. Your choice, and mine. And it's one I want to keep making forever.”

Kara sighs, relieved tears, happy tears, blooming at her lash line. “I know I can read your mind and everything,” she whispers, thick and sweet as honeyed wine. “But I'm really, really happy to hear you say that.”

Lena clicks her tongue, shaking her head fondly. “Kara, sweetheart. I love you. Every single part of you. And there's nothing I want more than to marry you today, so the whole world will be as sure of it as I am.”

Kara pulls her in then, all lips and tongue and bruising heat as she kisses the artfully applied lipstick soundly from Lena's mouth. Nothing in the universe has ever mattered less.

How do you always know the right words to say, Kara thinks as they pull back a little, gasping for air. It's one of the things she loves most about their connection; that they can keep up a conversation without having to distract their mouths from the essential task of making out.

Lena smirks, pressing another sure kiss to the velvet swell of Kara's bottom lip. Must be all those Sundays I spend finishing the crossword for you.

They break apart to the sound of Kara's laughter, light and unburdened once more as she swipes her thumb over the smudge of colour beneath Lena's bottom lip. I love you.

“I love you too,” Lena hums, batting her hands away and smacking her fiancée's ass as she turns back toward the door. "And I cannot wait to marry you, Kara Zor-El. Nothing in the universe can change that.”

“Boy, am I glad to hear you say that,” Kara smiles as her hand lands on the doorknob, glancing back over her shoulder to flash Lena a dazzling grin. “Because it's entirely possible somebody may have spoken to the wedding planner and had them switch out Pachelbel's Canon for *NSync's This I Promise You for when you walk down the aisle. And it's entirely possible that that someone was me. Love you, baby!” she calls brightly, already out the door. “See you out there!”

"Kara!” Lena yells after her, too little, too late. You may be able to outrun my voice, she huffs in her mind as Sam re-enters with Eliza and Ruby in tow. But you can't outrun my thoughts.

Sorry, what? Kara thinks back, stilted and choppy. You're breaking up, I can't— bad connection— no service—

Lena sighs so heavily she almost falls over. This is a telepathic conversation, she think-yells with despairing affection. There are no out of service areas!

And thank Rao for that, Kara thinks back, voice warm and smooth and smiling once more. I don't want to be without you for even a second. I love every single inch of you, Lena Kieran Luthor, and I cannot wait to marry you today and have our first dance in front of all our family and friends to It's Gonna Be Me.

When Sam notices the horrified look on her face and rushes over to ask her what's happened, Lena can't bring herself to even begin to explain it.

So, yeah. Lena Luthor is twenty-five years old, and today is her wedding day. To put it plainly, she's never been happier. 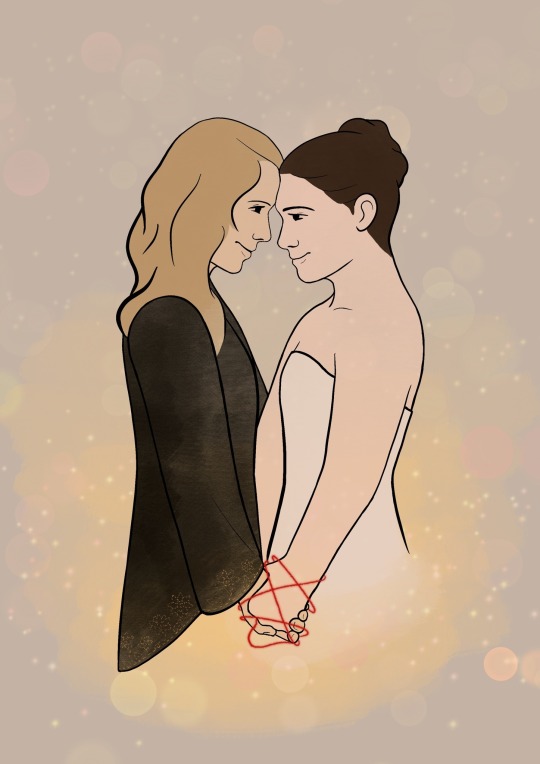 musical vibes for this may be found here