In the fateful battle of Kilchoan, Chaos and Order had clashed and ripped the land apart, leaving the sea in an uproar and the sky howling in agony. Lost deep beyond that earthly chaos were faint whispers from the void, speaking of wizards and soldiers that were to never return home again. Speaking of the Grandmaster and the loyal Soldier at his side.

“Are you ready?” Exavidar asked gently, the tall wizard before them nodded tensely.

Ralathor didn’t seem particularly ready, and if anyone would listen to Exavidar, which nobody did, they would have told them that Ralathor shouldn’t be doing this. Not so soon after what had happened to him.

“This is going to be rough, you’ll be facing unwinnable odds, so just hold out as long as you can. This is not a competition, it’s just a function test.” Exavidar wanted to soothe any nervousness in the young wizard, though the stoic calm in Ralathor's face as he nodded wouldn't hint at anything close to it. Just grim determination. After all, it wasn't like they told him anything he didn't already know.

With a regretful smile, Exavidar looked up at Ralathor. A Warrior now, but the face of the Soldier still they had once brought into time.

Exavidar only wished they’d give the young wizard more time. Or that Ralathor would have given himself more time.

He had lost his Scholar way too early, and that under more than questionable circumstances. And after assisting his Wizard to rebuild the Scholar, Exavidar had known immediately that he wasn’t alright. A nervous gleam had lain in the dark eyes, a lost sense of desperation, looking for something. Something he didn’t know what it was.

The Scholar had returned to earth now. (And they had advised against that too. As much as they had advised him once to never choose mentorship under that troublesome wizard Zargothrax. But now as then, their advice had fallen on deaf ears.) Ralathor had returned to earth to look for the answer his own death kept from him. Only time would tell if he would find the answers he was looking for. And if he’d come to regret looking for them in the first place.

He should have been given time to come to peace with himself.

Instead, here he was now, the Warrior, his third part, getting ready to be thrown into combat and inevitably, die. Again. And again. Because that was expected of him now.

"Good luck." They said gently, and Ralathor kept quiet. Then Exavidar stepped through a portal to immediately appear in the observation room. There was low chatter of the engineers and warriors overseeing the test. A very few soulturner were present too, their bright garments a stark contrast to the standardized black uniforms most common in Mezboahn, Mezchinhar's Military circle.

Ralathor was there too, looking at the large display of the test that was about to start. His dark attire blended in with the warriors around though the Wizard did not belong here.

The Wizard looked tired as Exavidar walked up beside him, looking at the display as well, seeing the Warrior, his fingers just barely flexing and spreading again. A calm voice announced the test to start momentarily and a low countdown began.

It was too late now to remind Ralathor that he shouldn't be doing this. The Warrior was now as much part of him as any other. There was no going back now. And the Warrior had now a purpose and duty.

"You'll do fine. You've been a good Soldier." Exavidar said downright chipper, just to say anything at all. They hated the gloomy mood.

The Wizard didn't look at them, his quiet gaze just fixated on the Warrior as the countdown drew to its end. Then just before it did, the Warrior's eyes glowed in the now dim light of the test chamber. And Exavidar knew the Warrior was alone now, separated from the Wizard and Scholar.

The Wizard wasn't supposed to help him now. His Warrior was to solely rely on his own senses, just as he would have to in any real combat situation facing chaos.

"Are you willing to tell me now why you wanted him? Now of all times?" Exavidar watched the Warrior as he defended himself against a first demon construct with ease.

For a moment the Wizard stayed quiet, part of his mind surely longing for the Warrior now, involved in battle, while his other part was as distant back on earth, searching for that something.

"I need him. Because it happened to him, too." Ralathor finally said.

"No, it did not. He wasn't you back then, not your Warrior. He was still just a Soldier." Exavidar corrected gently. And it was probably exactly this answer that was the reason why Ralathor hadn't told them before.

"I'm not sure that's true. Maybe technically. But it's not what I feel."

Exavidar heard the frown in the other's voice, all the while the Warrior was bombarded with an array of fire that shattered against a glistening ward. Lighting bolts scattered across the room in a rain of destruction, smiting the demonic mass encroaching on the Warrior. But there were just more and more of them.

Exavidar kept quiet. It was rare to hear Ralathor express anything he felt nowadays and so they didn't want to risk interrupting him.

"I always knew it. But since I died I know exactly what it's like. And I'm just more certain."

And after that Exavidar stayed quiet for a different reason.

But as most of the few things they knew about Kilchoan, this knowledge they could not speak about. 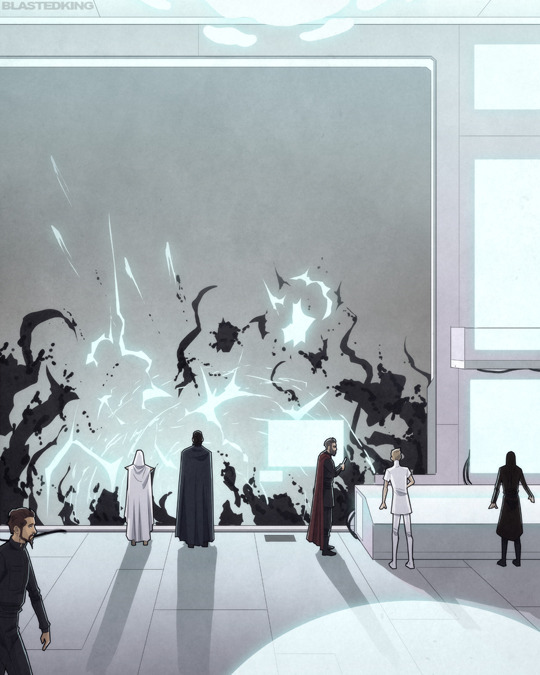 For the first time we start with a prelude chapter, but I felt it fitting to include it here.
The Story is about the in WoC much-mentioned battle of Kilchoan - so we jump even further back into the past with this one, following Zargothrax once more and witnessing what even has happened there. This will be the last jump into the past - with the next Story we return to more present events - but this one sure has some vital information for going forwards.
This one explores a lot about what Wizards and their Soldiers even are - and it should get pretty clear by the end of this.
No major warnings for this one, it’s a bit grim, but I think that one is to be expected at this point. There are some descriptions of injuries, but due to context, they aren’t as gruesome. The main focus is the mental strain of the situation.
I hope you enjoy it! It’s 11 chapters with a total of 33k words - a new chapter will be, as always, posted on Saturday at 7pm CEST/CET! Any form of comments is highly welcome but comment or not, thank you very much for reading if you do so, and I hope you’ll enjoy it!