A Night At Home

Wine + Bubble Bath = an adventurous Felicity and Oliver happy to be home for the evening. 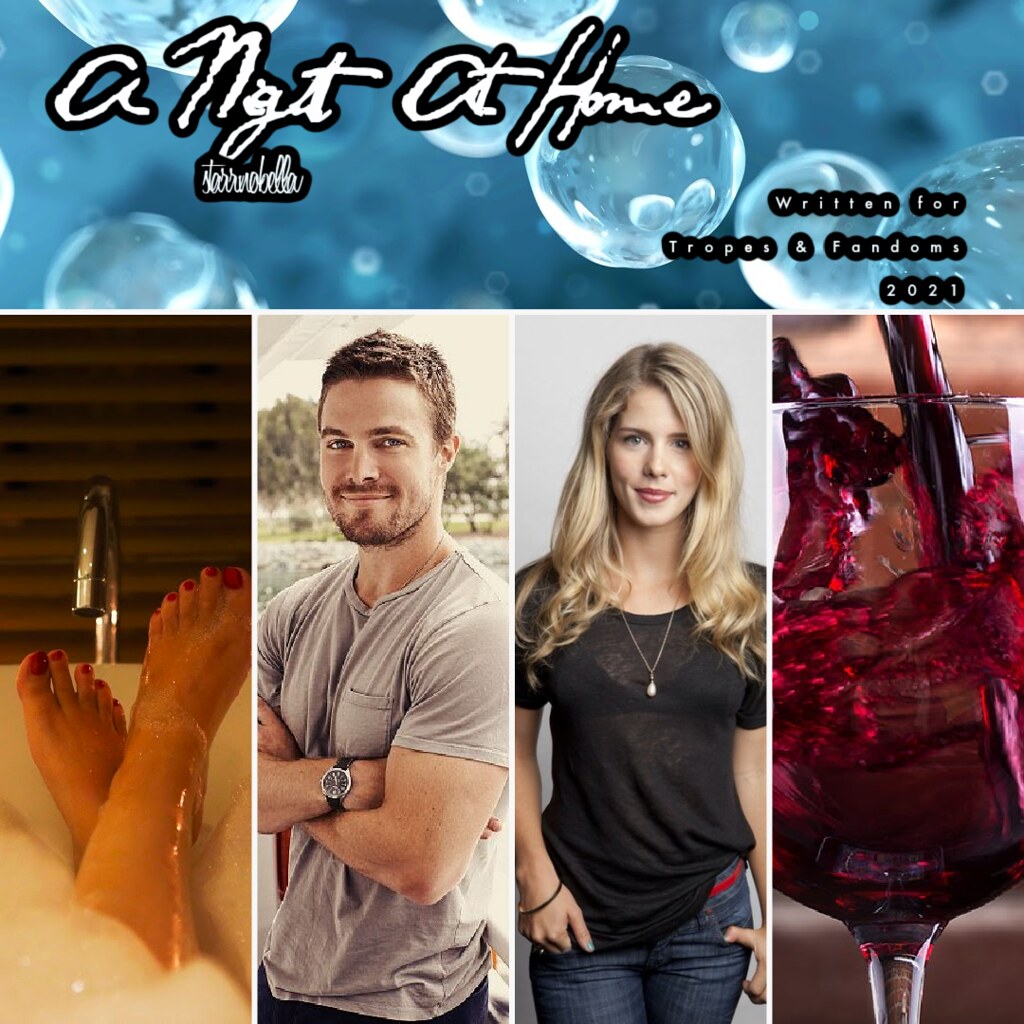 A/N: This was written for my 31 Days of Shipping prompt, Most popular ship in the fandom. Also written for Tropes & Fandoms, In Vino Veritas.

Beta work was done by Grammarly. The only thing I own in this little tale is the plot.

Be sure to let me know what you think!

"A night at the apartment all to myself," Felicity mused, pushing the door closed behind her as she kicked her shoes off. She walked over to the kitchen and went straight to the glasses cabinet. Pressing up on her tiptoes, she grabbed an enormous wine glass she could reach off the top shelf. "Whatever shall I do with myself tonight?"

Felicity hummed quietly to herself as she gathered a bottle of wine and bottle opener from the kitchen. Leaving a trail of clothes behind her, she made her way to the master bathroom before pouring herself a full glass. Turning the faucet on high, she ran herself a bubble bath and dimmed the lights.

"A night of peace and quiet," she mused, slipping into the tub and covering her body with the bubbles. With her eyes closed, Felicity took a long sip of her wine and rested her head against the edge of the tub, allowing her body to relax fully. It had been a hot minute since she had a night where all she needed to do was relax.

Any normal night she would be hunkered down in the bunker with her headset on. She would watch through the body cams as Oliver and John took down whatever bad guy the Green Arrow was after for the evening before coming back so that she could doctor up whatever wounds they each earned in the night's fight. It was only the two of them she needed to worry about, at least for the time being. The best thing to happen to Team Arrow was Thea and Roy getting the hell out of Star City. She kept tabs on them in Central City, but at least she knew they were safe.

They listened to her when she told them to go, unlike her loving husband. Referring to Oliver as her husband brought a smile to Felicity's face. As nice as it was to have the apartment all to herself for the night, there was a small part of her that wished he was here too. They had barely spent any alone time together since the wedding. If he wasn't out fighting as the Green Arrow, then he was defending the city as the mayor - a job she certainly wasn't jealous of at all.

Felicity drifted in and out of consciousness as she relaxed in her bubble bath, enjoying her glass of wine. The soft music playing over the speaker pulled her into a peaceful state. After a little while, her empty hand began trailing the length of her body. Her fingers traced every curve of her breast before gently flicking her nipple, eliciting a slight moan from her lips. A wicked smile pulled at the corners of her lips as she felt a warmth pooling between her legs.

Slowly, she trailed her fingers down her stomach, stopping just shy of her inner folds. Felicity took a deep breath before sliding one finger along her slit, grazing her clit ever so gently. Her body reacted, splashing a bit of water over the edge of the tub. Felicity rubbed her finger along her slit back and forth a few moments before slipping a finger inside her core, feeling the warmth. A moan escaped her lips as she leaned her head back, pushing it into the side of the tub.

"Should I be jealous?" Oliver said, chuckling softly as he leaned up against the doorway.

Felicity's eyes snapped open, and she lifted her hand out of the water, holding it in the air. She narrowed her gaze at Oliver's smirk and lifted her wine glass to her lips. "I thought you weren't going to be home tonight," she growled, crossing her arms over the edge of the tub.

"Clearly," Oliver teased, pushing away from the door and walking over to the side of the tub. He leaned down and pressed a kiss to the top of her head. He knelt beside the tub and cupped her cheek, stroking her cheek gently with his thumb. "You didn't have to stop."

Felicity looked up at him with a raised brow as a smirk pulled at the corner of her lips. "Or," she suggested, pressing a chaste kiss to her lips. She ran her tongue along her lips as she pulled back from the kiss. "You could pour yourself a glass of wine and join me."

Oliver looked her up and down momentarily before directing his eyes to the bottle of wine sitting by the tub. "Is that a serious answer or the wine talking?" he asked, laughing as he picked the bottle up to get a better look at it. Turning it upside down, Oliver laughed when Felicity reached out to grab it.

"Be careful!" she yelled. "You're going to spill it everywhere and waste it."

Oliver pulled the bottle away from her and held it over the tub before turning it upside down again. Felicity stared at the bottle with a puzzled look on her face for a few moments. "It's hard to spill something that's empty," Oliver teased, leaning in to press a kiss to Felicity's temples.

"Oh," she laughed, snorting as she took the bottle from him and held it over her empty wine glass. "That makes sense."

"Why don't you finish up here, and I'll grab us another bottle and meet you in the bedroom?" Oliver said, cupping the back of Felicity's head as he stood up from his knees with a smile on his face.

Felicity nodded her head quickly and took a deep breath before submerging herself in the tub to finish cleaning off. Oliver shook his head with a laugh as he made his way down to the kitchen. Wine always brought out the adventurous side of Felicity. He was just happy to be home on a night when that side decided to make an appearance.

He grabbed another glass out of the kitchen and a bottle of her favorite Merlot before making his way back upstairs. Out of the corner of his eye, he noticed the trail of clothes leading to their bedroom. "Home sweet home," he mused, laughing as he shook his head. He wouldn't have it any other way.