Shen Wei gets a phone and realises having a photo of his husband as a lockscreen might not be a good idea.

Begrudginglytumbling wrote about Bai Yu: "The man is a menace to one’s concentration."
and gouinetteparletrop made such a funny joke about noods (that I didn't get at first because I'm an idiot), that I just had to take these two examples of tumblr idiocy greatness and run away with them 😂
I have no excuse and no regrets 😂😂

“A phone,” he confirmed happily, while Shen Wei tried, and failed, to come up with new arguments for the old discussion.

“But I,” he began, but Zhao Yunlan didn't let him continue, as if he had waited for this opportunity. “We have been through every reason you don't want a phone, and not one was convincing. Baby,” he added with a pout, and Shen Wei cursed his fate and everything that had left him so weak when it came to refusing Zhao Yunlan anything. Nevertheless, he had been in battles that looked like a lost cause before and had been able to turn it around. The Black-Cloaked Envoy wouldn't just…

“And I have an argument you can't ignore,” Zhao Yunlan said, alarmingly cheerful, and Shen Wei felt dread rise in his chest. “Since you are a consultant for the SID,” he said, still grinning shamelessly, “I am technically your boss.” He made a dramatic pause. “And as your boss I decide that all my team members have to have a phone in case of an emergency.”

Shen Wei pushed his glasses up his nose and looked at Zhao Yunlan. He knew when he had lost a battle, but he wasn't going to make it easy for the other.

Using the phone was easier than Shen Wei had anticipated. Zhao Yunlan had spent quite a number of afternoons – and mornings, and evenings – to show him all functions he needed to know and patiently answered each and every question, never once giving Shen Wei the feeling of being stupid for asking.

That almost had him make his peace with the device, had it not been for… Well, really for Zhao Yunlan’s need to show off. When he had first handed him the phone, the picture that appeared when he touched the screen had been a pretty mountain range that reminded him of the mountains he came from. But after a few days, the screen suddenly showed a picture of Zhao Yunlan in a sleeveless black shirt, smiling widely into the camera. Shen Wei had almost flung the phone away when he first saw it, but Zhao Yunlan had just laughed at him and refused to change it back.

It had proved to be…distracting.

By now, Shen Wei was pretty good at ignoring the various noises the device made in his desk drawer, some he already recognised, but every time he actually took the phone in hand he found himself staring at the picture. He had missed more than one urgent e-mail because he had been staring at the locked phone instead of opening the mail app.

So, it had been not entirely surprising his students had noticed he suddenly had a phone – and was using it. Every time a muffled ping came from below his desk, the students that were attending his office hours looked at each other knowingly. He directed a stern gaze at them every time, hoping to nip any gossip in the bud, but knowing his students he feared that this was too late anyway.

One afternoon, after a particularly chatty group had left his office, he reached for the phone to type a message to Zhao Yunlan.

4:17         I have overheard something my students said. My phone was in my desk and made noises. They were wondering if you sent me something.

Shen Wei stared at the phone that of course now had chosen that exact moment to stay silent. He knew sometimes Zhao Yunlan wouldn't answer a message right away, but he had been reacting to the first ones, so now this sudden silence was irritating. Shen Wei sighed and moved to turn off the phone and put it away, when it pinged and showed a new message from Zhao Yunlan. Hastily, he opened the app again.

Frowning, Shen Wei considered how to respond. Zhao Yunlan had never laughed at him when he asked a question, so why now? Before he could decide on an answer, another message appeared. When he opened the app again, he found that Zhao Yunlan hadn't answered with a message, but sent a photo. 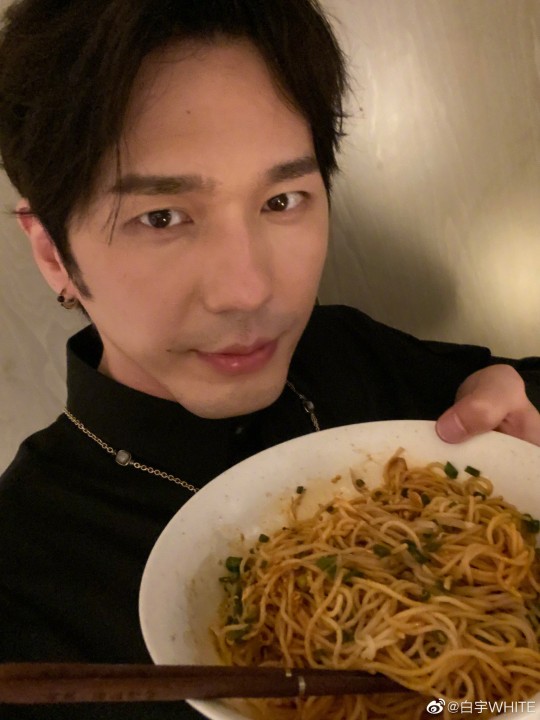 Suppressing a snort, Shen Wei typed back that he in fact liked them very much. Then, after a second:

With a smile Shen Wei put the phone back in the drawer and called in the next visitor.

The day had gone by quickly, none of the students were facing an actual emergency, he could answer all questions they had and he felt quite satisfied when Jiajia came into his office after the last student had left. He smiled at her and moved to collect the things he would need to take home with him, sorting through papers and exams.

“You are in a good mood today, Professor,” she said, smiling as well. Jiajia had been a lifesaver more than once in his career and he trusted her more than any other TA before, so he just nodded. “The day was productive, I think. Most of the students just wanted to ask specifics about the exams, and no one is in danger of failing the class, so all talks were quite constructive.”

Her smile widened and she nodded, when Shen Wei added, “And my husband send me noods.”

In an instant, Jiajia’s face turned crimson and she began coughing violently. Worried, Shen Wei stepped closer and patted her back until her breathing calmed down, although he noted her face still had an unhealthy color. “Are you alright,” he asked, still worried, and Jiajia looked at him with a panicked expression he couldn't quite place. After a prolonged silence, she said tentatively, “Professor Shen.” Raising an eyebrow, he waited for her to continue. A deep inhale, then, “Professor Shen, I advise you to never say that sentence to anyone else.” She looked directly at him, almost pleadingly this time. “Please, it’s…” She trailed off, and Shen Wei had the urge to comfort her. Nodding, he agreed. “Alright then, I won’t.” He considered. “But they were nice noods.”

Jiajia sputtered, her ears turning even darker than before. “I can imagine,” she wheezed.