Exactly 116 years had past since Zelda Spellman had left Greendale. In all that time, she had only been back to her hometown twice. The first, for her brothers wedding. And the second, for the birth of her niece Sabrina.

Prepare yourselves for a rollercoaster of emotions, as this fic is going to be deeeep in the feelings department. Also, lots to enjoy also! Not sure how long it’s going to be yet but I imagine it will be similar to the first part of the fic. 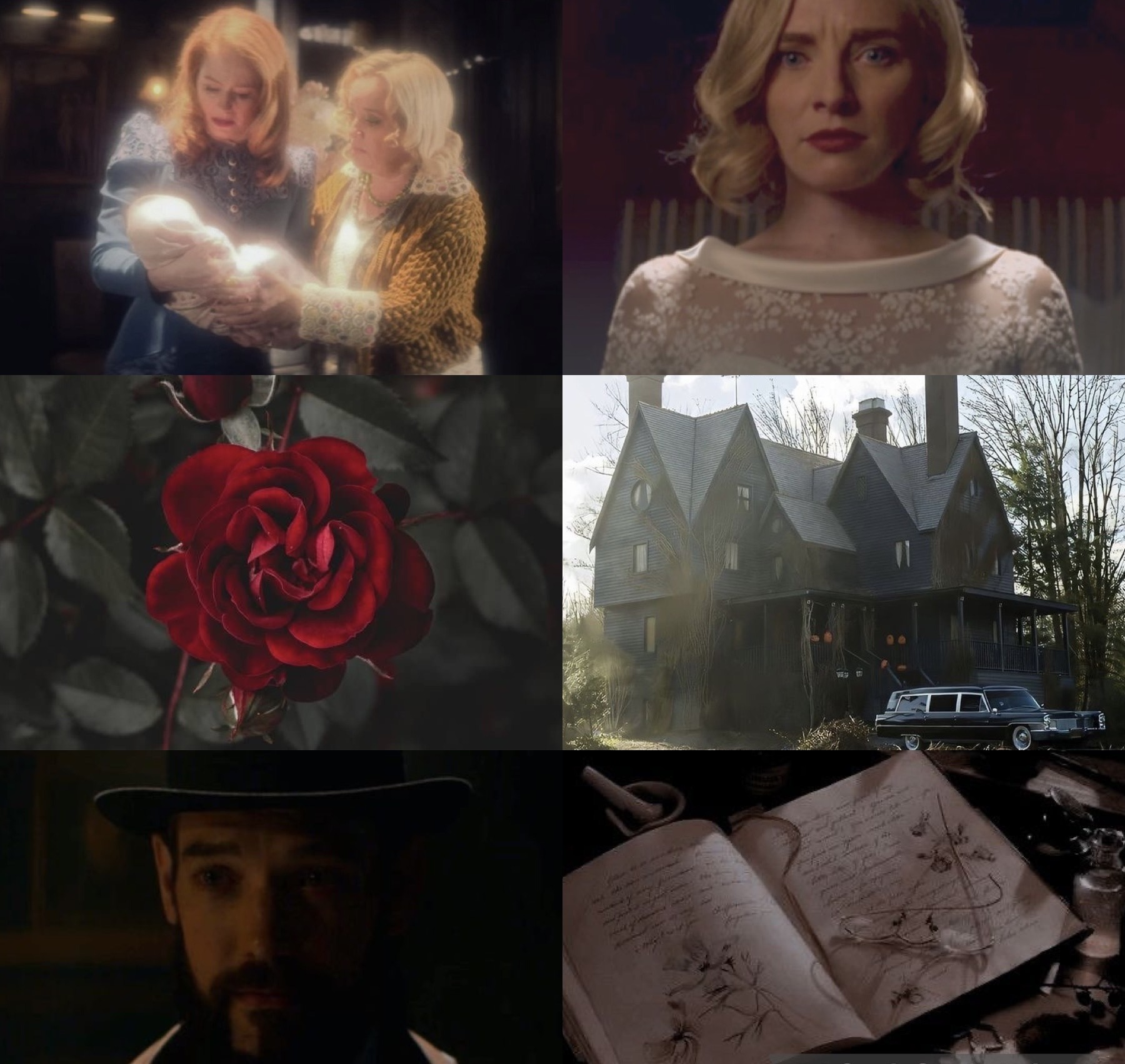 Exactly 116 years had past since Zelda Spellman had left Greendale. In all that time, she had only been back to her hometown twice. The first, for her brothers wedding. And the second, for the birth of her niece Sabrina.

Edwards marriage to Diana was ludicrous, in Zelda’s opinion. She blamed herself for him falling for a mortal, saying it was because their Father was in Hell and her being in Italy, that Edward had lost his way and had no support or guidance to put him back on the right track. In an argument with her brother over this, she almost, almost placed blame to Faustus. Thinking that he should never have allowed this to happen as High Priest and as his closest friend, supported him and to reiterate the pure stupidity of being with a mortal. But she stopped herself, not being able to bare the thought of the unknown feelings that could arise if she spoke his name. She remembers taking the phone call before she was due to make a speech at the international magical relations ball that the palace was hosting, and how the anger boiled through her, her hands clutching onto the sides of the podium as her face reflected a beam of happiness to fool the audience.

“Satan in Hell Edward! I wish I had more time to talk, but I’m due to give a speech. I have about a minute before I must go, so speak quickly” Zelda almost squeaked.

Even over the phone, Edward’s nerves were out of control. He knew his sisters opinion on mortals. But he knew he had to tell her. He loved Diana, and nothing could change that.

“... shes mortal” he believed if he just said it, it would be easier than avoiding it before it got too far.

The line was silent and Edward had to check that his sister was still there.

“And I want to marry her” he added.

“I must go” and Zelda hung up, shock clearly consuming her.

It was certainly one of the worst phone conversations between the two of them. Though, when she did eventually return the call three weeks later, she did nothing but scream and shout at him for the better part of an hour. Lecturing him on how many different types of wrong the partnership was and why.

The phone call got that heated that Zelda slammed down the phone, to which it broke into several pieces, and she demanded that a few members of the Sovereigns-guard bring her brother to her. Damon was amused at her outburst and told the head of the Sovereigns-guard to “give her what she wants”. Realistically, it wasn’t in Zelda’s bounds to demand anything from them, or even the palace guards. But she always had her ways. Damon of course being ‘her way’.

To her delight, Damon’s entourage brought her brother to the palace so she could continue to verbally rip into him. It was devastating for the both of them. Zelda attempted to explain the reason she was reacting like this was because she loved him, but Edward didn’t see it like that. He accused her of sabotaging his happiness because she was bitter about not getting her ‘happy ending’. At that, Zelda was silent. Completely astounded that he would even dare.

Even though it had been over nine decades, his words stung her. And, in Zelda’s defence, for all he knew, she did get her happy ending.

After they had both calmed from the height of the argument. Edward quietly begged her to help him so that he could marry Diana, as he knew that it would be a slim chance. Not to his surprise, Zelda declined and tempers started to brew once more.

“You’re getting royally high!” Edward yelled at his sister.

“And you are falling off your path Brother!” She snapped back at him.

“Why will you not help me?! I love her Zelda. Can you not remember what that feels like?” He sighed, not even having the energy to continue to shout at her. He felt defeated almost.

She was silent, but her eyes were like daggers staring at him. “I can not help you. I am a Sovereign Minister, I have a close relationship with the Head Sovereign. I can not be seen to be meddling in small affairs, especially ones that concern mortals”

“Then, may I ask the Head Sovereign himself? Maybe he is more willing to help than you are”.

She huffed at her brother for having the gall to ask for Damon personally.

She never did answer the question.

Many months later, she received an invitation to the wedding ceremony of her brother and his fiancé. Zelda still had no idea how he had pulled it off, though she certainly had her suspicions, as Damon was more than encouraging for her to attend, given that the same weekend was one of the most important council dinners of the year that as a Sovereign Minister and date of the Head Sovereign, she shouldn’t have missed it.

Much to Zelda’s appreciation, there were three guests at the wedding, her and Hilda being two of them and Diana’s sister being the other. Hilda elbowed her older sister numerous times that day as she saw the disgust look Zelda pulled more often than what was acceptable even by Hilda’s expectation. But everything was white and pink and pretty, and Diana was blonde and angelically irritating to Zelda. She could barely make out her house underneath all the voil and flowers. That night, she prayed deeply to the Dark Lord to forgive her for attending such an abomination.

As quickly as she got to Greendale, she left again. Even Hilda criticised her for being such a ‘grump’ and not even pretending to make an effort with their brother. Zelda’s response was something along the lines of ‘I came didn’t I?’. In spite of Zelda’s reluctant presence, Edward and Diana married happily and it didn’t darken their smiles once. Hilda found it obligatory to apologise to Diana on behalf of her sister and attempted to explain the complication that is Zelda Spellman.  Diana kindly brushed it off, though Hilda could see behind her bright eyes that there was a small doubt that she wanted to be accepted by Zelda.

Three years after Edward married Diana, Zelda received an unexpected phone call from her brother. They had barely spoken since his wedding. But this phone call was to inform her that Diana was pregnant. As Edward expected, the line went dead and she summoned him to the palace. Where it was agreed between the three siblings, Diana, Damon and two of his closest advisors, that the child would be home schooled until his or her dark baptism and then attend the Academy and become a real member of the Church of Night.

Zelda knew the uproar this would cause if word of Edward, the son of Carlisle Spellman, Prince of Hell got out that he impregnated a mortal. The first suggestion when they were all in one of the meeting rooms of the palace was of course, to terminate the ‘problem’. Zelda instantly stood protectively in front of Diana and told the advisors that they were ‘ out of their minds’ and that ‘would never happen whilst she were breathing’ and even then they shouldn’t push her.

Edward beamed at his sisters reaction and though Zelda had never said more than a few words to Diana, it meant more to her than Zelda would ever know. In turn, Diana or Edward would never understand why Zelda did what she did. The only person in that room that understood, other than Zelda was Hilda.

Diana had a difficult pregnancy, being bed bound for the second half of it. Hilda couldn’t be sure whether Diana would be pregnant for a mortal 9 months or 13 months. She researched everything she could think of but this was the first time a witch ever mated with a mortal. It was all unknown. Hilda couldn’t even confidently give an answer to her brother when he asked if Diana was going to be okay. Because truthfully, she didn’t know. The growing babe took its toll on Diana’s body. Having said that, Zelda had previously jumped at Diana’s defence, she did not follow the pregnancy closely. It was as though she didn’t even know. Returning to her busy Sovereign Minister life as if it were nothing.

That was until Diana was in labour.

Zelda was in Greendale before anyone could have even said ‘baby’. The sudden absence of Zelda from the palace blew Damon into a state of rage as he was hosting an international archery tournament and wanted desperately to show Zelda off. What angered him the most was that she didn’t tell him she was going, he had to find out through one of his aids.

36 long and draining hours had past and finally, baby Sabrina was born. Naturally, Hilda banished Edward out of the room and summoned Zelda in to help her. Zelda’s reaction was at most shocked, mumbling about how she was not going to help until Diana pierced her ears with her screams.

Zelda held her niece first and was completely in love. Understanding that she wouldn’t see her grow up as much as she wanted in that moment. Zelda was saddened at the idea that because her mother was mortal, she wouldn’t be able to teach her crafty little spells and about all of the witch festivals. Yes she had her father for that, but it’s not the same Zelda thought. She wanted to be the one to teach her those things, but she knew that was not realistic and she would have to pull herself together and get back to Italy, wondering when she would next see her wonderful niece.

A few days after Sabrinas birth, Diana sadly passed away due to complications and loss of blood. Hilda did everything she could think of, but it was too much for Diana to handle. Zelda may have come across more on the cold hearted side of Diana’s death, but she was secretly pleased that she at least spent a few days with her daughter. Edward was utterly inconsolable, leaving the new born in the more than capable hands of his sisters.

As the days past, Zelda grew anxious of what would be waiting for her in Italy and pulled her brother together as he needed to start acting as a responsible Father. She also stressed that Sabrina would need a Mother figure in her life and that Hilda would be too soft. Fortunately, her and Edward came to an arrangement. Zelda was to have Sabrina two weeks in summer every year. That way, she could educate her in things she felt Hilda couldn’t and the trips would also be cultural for her seeing as she would be a guest at the palace.

Zelda adored having Sabrina for that time. Teaching her what it was really like to be a witch. Sometimes, doubts skimmed across Zelda’s mind of that her niece is only a half witch. But it didn’t make her love her any less.

Any ideas of where this is going?