This is a collection of reactions from various slashers that I write for on my tumblr blog. Slasher x Black Reader content only.

* I do not own any of these characters* 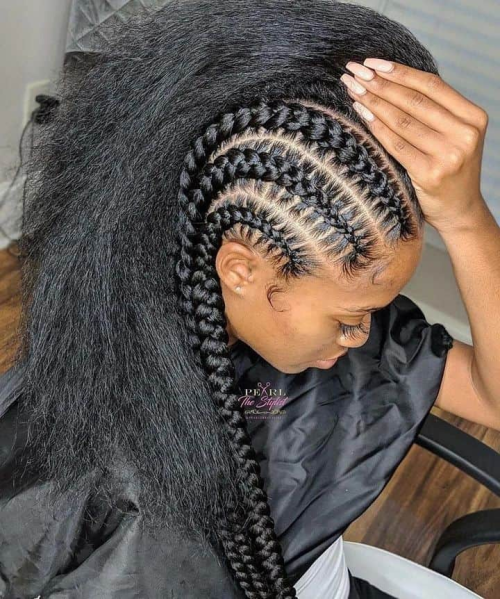 “Well damn, whatchu want me to do? I ain’t done no damn hair before!”

He really tries but can’t grasp it. Literally. His fingers are kinda thick so it’s hard to get a good grasp on small strands

Which turns into an argument on what he should try to do.

He ends up helping you part your hair mostly. Thankfully the braids will be taken a loose in the morning to turn into a wavy style

He makes it up by massaging your arms afterwards.

He’s a sweetie so he will jump to help when you ask. Even if he has no idea what to do

He watches you do some by yourself. You go slowly so that he can visually get the hang of it

He gets really good at the braiding technique, whether it’s cornrows, regular braids, or weave

If you decided to install braids in, he’s great at mixing/blending the hair colors together (If you bought different ones).

It pays to have an artist as a boyfriend, he’s naturally good with his hands and pays attention to detail.

Triple team that shit and it’ll be done in no time. You don’t have to worry about spending all night tryna get it done

They don’t know how to part for shit, so you have to do all the parting. God forbid you not good at it either. Or else your hair gonna look rough lol

Miraculously, Billy can start the braid off no problem. You compliment him and he gets all smug about it. Stu tries to show him up by learning how to do the braiding fast.

Stu gets good at that but tends to make mistakes

Overall, not bad. Your arms will have plenty of time to rest honey. Don’t you worry

Depending on his mood, he may or may not help you

He won’t help if he’s tired, just come from a killing spree (bloody hands ew), hasn’t been on a spree in a while, or feeling agitated for some off reason

He will help if he’s in a good mood (is that possible?), very curious, or you promise him something in return (basically manipulation)

Michael can’t………can’t braid for shit. It’ll be best if you just do a ‘twist’ braiding style (like Senegalese)

He can help with parting and twisting down. But you will have to start it off. He refuses, mostly cause his fingers are a little thick for it.

He’s pretty slow at it. He will take his time and you will accept it. You fuss at him and he will go slower or just stop

When Michael gets obsessed with something, he will go hard until it’s conquered. So if that happens, you’re in the bag!

He feels just as accomplished as you when it’s finished. Both of your arms are aching though. You suggest soaking in the tub to help and he jumps up to go run the water (baths are his weakness)

She gets snacks, drinks, blankets, and puts on a show series for y’all to binge on Hulu

In terms of doing braids: If you decide to use weave, you’ll have to teach her how to start it off.

I hc that she’s in cosmetology school/class, so she knows how to do hair. It’s another way for you two to bond

You two have so much fun the whole time. Bouncing between laughing, gossiping, eating, and working on the braids

It takes a good while for y’all to be done. But, it was worth it for all the quality time both of you had.