Jensen reflects back on falling in love with Jared in spite of his inability to use a chair properly. 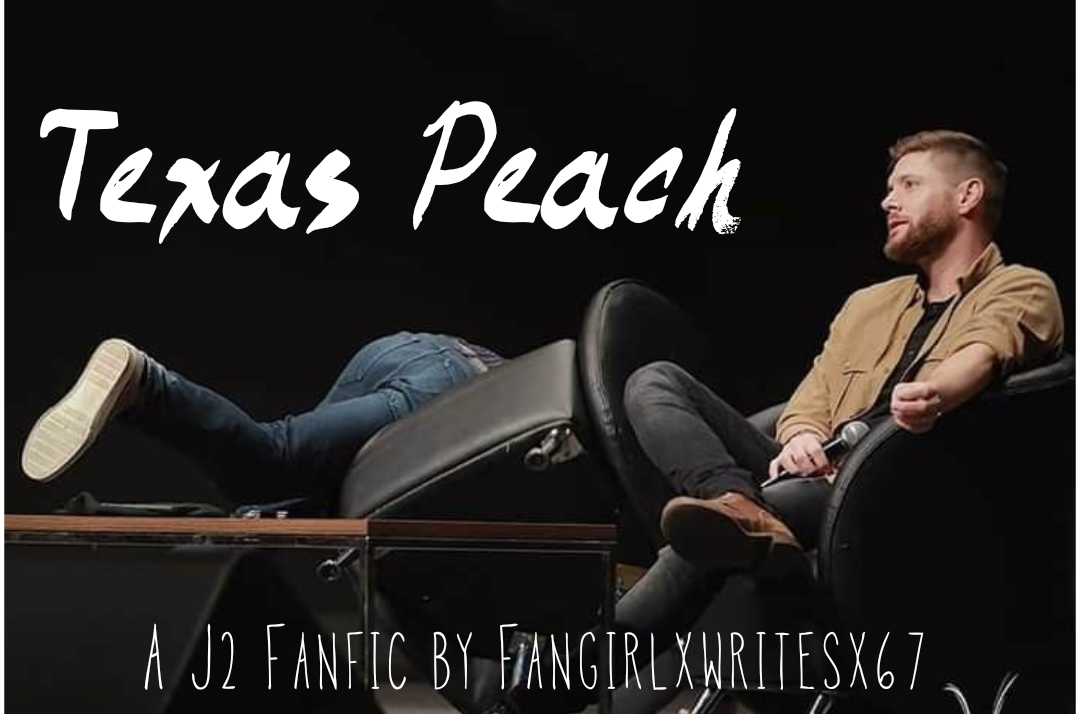 “You think you’re so cute, and clever?” Jensen slams Jared up against the closet doors in their shared hotel room. “Falling all over that chair on stage?”

“I tripped!” Jared protests, without making any effort to escape from his grasp.

“Okay, I believe that, you’re as clumsy as a puppy. But what was that wiggle, those spread legs? You just needed to show everyone your ‘Texas peach’? I swear sometimes you’re the biggest fuckin’ tease.”

“And you like it,” Jared sasses back, eyebrows going high.

“That’s not for everyone to see.” Jensen has him pinned with one arm across his chest and he pushes, just to make his point. “You’re mine, and don’t you forget it!”

Jared smirks and that’s all Jensen needs to press his lips against his. One hand slides up into his long hair and yanks while the other sinks to his ass and squeezes, hard.

It takes a minute to register that Jared is answering him between kisses, sinking into his embrace.

Jensen keeps his commands short, his tone firm. “On the bed. Naked.”

Jared obeys, and when he’s settled in, ass in the air, he tosses a look over his shoulder. Those kaleidoscope eyes and deep dimples, the flash of mischief in his gaze – it throws Jensen back.

***
Jensen remembers the first time he saw that look, those eyes, meeting Jared all those years ago.

“I looked at him and thought, this guy is so handsome, there’s no way I can play his brother!”

This is the way he always tells the story of that first moment. What he leaves out every time is the rush of longing that almost choked him the first time he met Jared. He was so taken with the flash of his eyes, his wide smile, the almost electric feel of skin on skin in something as simple as a handshake.

He remembers Jared at the first table read, turning a chair backward and straddling it. He took up space in a room easily, his sunshine smile splashing light everywhere. When the read was over, he tripped getting up, and Jensen wondered how someone so beautiful could be so goddamn clumsy.

Jensen followed Jared out of the room and he could swear there was a tiny little sway to his hips, something only he could see. He wondered if Jared knew he was doing it, if it was meant for him.

They treated themselves to dinner together when they found out they both got the roles. Jensen told himself that his invitation was purely professional, that he needed to know this guy better if they would be playing brothers.

Jensen pulled out a chair for Jared and the taller man sat down willingly.

“Just wanted to make sure you sat in the chair properly,” Jensen retorted. Jared blushed. Jensen couldn’t tear his eyes away, fascinated by the way rosy color crept over his high cheekbones and into the shaggy dark hair that framed his handsome face.

Jensen was surprised by how much Jared wanted to be noticed, the way he almost needed to be the center of attention. But it was easy to see why – his magnetic smile and irresistible charm could win over anyone. Jensen surprised himself by how much he wanted to give Jared that feeling of being seen, of being special. It was an almost magnetic attraction.

But he had to be sure. Unlike Jared, Jensen was shy, cautious. Wanted to know he was right before he made a move.

They weren’t stars, not then, got their own food and drinks from the craft services table. He had been watching closely, and one day, when he got coffee for himself, he brought one back for Jared too.

He was sitting sideways in a canvas cast chair, balanced with only one foot on the ground. Somehow, he looked like art.

“Here’s your coffee, Princess, extra vanilla creamer.” Jensen was teasing, but he saw the way Jared’s face lit up, all sunshine open and hopeful. He could’ve kissed him right then and there.

***
When they finally did kiss, it was electric, the first press of their lips together sending a thrill all the way through Jensen. Jared was desperate, almost sloppy. Jensen pulled him in and held him with one hand on the back of his neck. Jared melted into Jensen’s arms, long warm hands bracketing his face to keep him close.

Jensen’s grasp tightened around the back of his neck, fingers tangling in the silky chestnut curls there. He yanked, and Jared whimpered, hips bucking up hard.

“Wanna make you feel so good,” Jensen murmured. “Wanna take care of you, make you mine.”

Jensen took a long look at him, at his wide lust blown hazel eyes, his flushed cheeks, his kiss-swollen lips. He was almost too beautiful, too bright.

It was late at night, after another dinner that they told themselves was for work. They had eaten at the hotel where they both had rooms while filming, so it was easy to go upstairs. Jensen opened the door to his room and held it open for Jared. As he walked, Jensen reached out and grabbed his ass – so perky and perfect, he just couldn’t resist.

“Clothes off. Get on the bed.”

He watched the way Jared’s eyes went soft and his mouth dropped open, and then he was understood. He had suspected, but now he was sure. This Texas giant wanted nothing more than to be cared for.

Jared had obeyed eagerly, movements graceful, and Jensen’s lips curled up in a smug smile as he praised him. He knew, was absolutely sure, that Jared was offering what he wanted. And in return, he took control. He gave Jared that feeling of being small, safe, sexy.

The two of them spent hours exploring one another’s bodies, learning how to touch and taste and feel one another. When they were finally sweaty and sated, they showered together, and that was a whole new world of beauty and wonder. Under the hot spray, Jared buried his face in Jensen’s shoulder, and as he kissed the water droplets off the shell of his ear, he thought that he wanted to spend the rest of his life doing this with Jared.

Afterward, they fell asleep in the same hotel bed together. The king size bed had plenty of room but Jared was all over him, arms and legs sprawled and possessive even in sleep. Jensen wasn’t used to this kind of demonstrative physical contact, to being so obviously needed. But he took a deep breath and fell into the best sleep of his life.
***

Jared shimmies on the bed, tosses his hair, and the movement pulls Jensen out of his memories and back into the present.

“You know you don’t have to flaunt your ass on stage to get me to notice you, right?” Jensen asks dryly, running his hand down the broad slope of Jared’s back and giving his ass a solid smack.

“What?” Jared winks, his face mock-innocent in a way that Jensen always finds irresistible.

“You could even sit on a chair the correct way like a normal human being.”

“I could never.” Jared nuzzles into him like a puppy, like he’s cold and Jensen is the sun.

“Do whatever you want, on stage, say whatever, I don’t care. You’ll always be mine.” Jensen pulls him in with a strong arm for a hard kiss.

“Yours,” is the last coherent thing Jared says. “Always yours.”

This one is for there_must_be_a_lock, with thanks for all the beta reads and sexy Jared pics and most of all, the friendship. I asked you to send me the “best picture of Jared” and you sent me this and well, shenanigans ensued.