On the Silver Screen

Seeing a silent movie isn't Maryellen's idea of a good time, even if her parents love them.

Maryellen grumbled inwardly and fidgeted a bit as the line inched closer. The movie theater had a matinee showing of a classic silent movie every Saturday afternoon and this time it was showing the movie that her parents claimed they had seen on their first date, so they'd decided to bring the entire family. Maryellen had lost count of the number of "first date" silent moves her parents had dragged them all to, but it wasn't like she had anywhere better to be. Davy was at religious services - he called it shul - and after that he had another Hebrew lesson. He grumbled about it, but she suspected he enjoyed all of the ritual. It was only a week till his Bar Mitzvah, and after that maybe they could come up with something better to do with their Saturdays.

She found herself envying her older sisters. Joan was off at college and Carolyn had a date so they'd escaped their fate. A silent movie wasn't Maryellen's idea of a good time. She hoped they'd have a real organ player instead of the record they sometimes used for silent movies. Maryellen had memorized the skips in the record long ago and found herself wondering why they didn't just buy a new, unscratched one.

The poster was decent at least. A beautiful girl, a man looking properly threatening in his tri-cornered hat and fussy beard and a handsome king on the throne behind him. Esther starring Rebecca Rubin as Esther, Max Shepard as Mordechai, and Lily Armstrong as Vashti. Her eyes swung back to the first name on that list. The article on Honey Blake had mentioned that a Rebecca Rubin had been cast as Mrs. Swift. Maryellen wondered if it was the same Rebecca Rubin. There hadn't been a photo in the magazine, but if she'd been playing a young woman when Maryellen's parents were dating, she might be playing motherly parts now. Suddenly seeing the movie felt less like a chore and more like research. She couldn't wait to tell Davy. 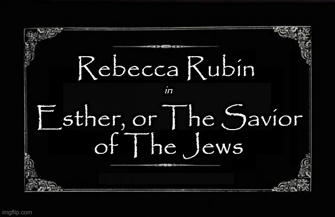 Sound came into movies in 1927 with the Jazz Singer. Maryellen was born in 1944, and Joan is 7 years older (1937). The math is pushing it a little. but maybe it wasn't new when her parents saw it, or maybe they just like silent movies.