In the Pages of a Magazine

With Davy stuck in Hebrew lessons, Maryellen is very bored.

Maryellen sat on the front porch swing idly turning the pages of her new magazine. She'd asked her mother to buy the latest issue of Analog when she went into town that morning, but her mother had brought home 'Teen instead. Ever since Davy had started practicing for his Bar Mitzvah, her mom had doubled down on trying to get Maryellen to act more like a girl. Maryellen made a face. She was a girl, therefore anything she did was acting like a girl. But just try and get her mom to see that.

The magazine was boring and it was hot. She set the swing moving, and continued flipping through it looking for anything that might hold her interest for a little while. Her brothers and sisters were all off doing things and Davy was at Hebrew School and it was way too hot to do anything. Beauty tips, dull. Dating advice, even duller. The recipes were all right, she supposed, though she didn't have the desire to try any of them. The latest teen sensation. Okay, that caught her attention. Honey Blake had been compared to Shirley Temple and had practically grown-up in the movies. Now she'd signed on to do a TV show, playing Sandra Swift, sister to inventor Tom Swift in a new series airing in the fall.

Wait, Maryellen couldn't have read that right. Her very favorite series was getting a TV show? Why, upstairs in her bedroom she had both her father's old Tom Swift series and all the volumes of the newer Tom Swift Jr. series, all of which she'd read and reread, and she was eagerly awaiting the next one, enticingly titled Tom Swift on the Phantom Satellite. Sandra might not be the focus of the series, but at least she was there and got to go on some of the adventures unlike in the Tom Corbett series where there were very few girls or women to be found. She couldn't wait to tell Davy. 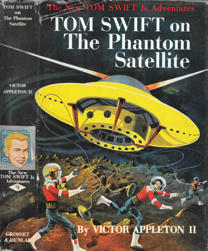 Tom Swift's been going in bursts and fits since the 1900s. There have been a few attempts to bring it to series, including a pilot filmed in 1957, that has since been lost. It was probably based on the original series, but I've chosen to base it on the Tom Swift Jr. series because of Sandra. I suspect that given Maryellen's interest in space, she would have devoured them, along with contemporary science adventure based series like Rick Brant, Tom Corbett, and Lucky Starr.