Shot Through the Heart

Finnick, the god of love, tasks goddess, Katniss, with taking over for him for the day, so he can spend time with his beloved. Little does Katniss know that her mortal target will have quite the effect on her.

So, I know this isn’t in time for Valentine’s Day, but I’d been thinking about this and managed to crank something out today. I was inspired by a prompt and a piece of art of Cupid!Katniss by rosenacree on Tumblr. 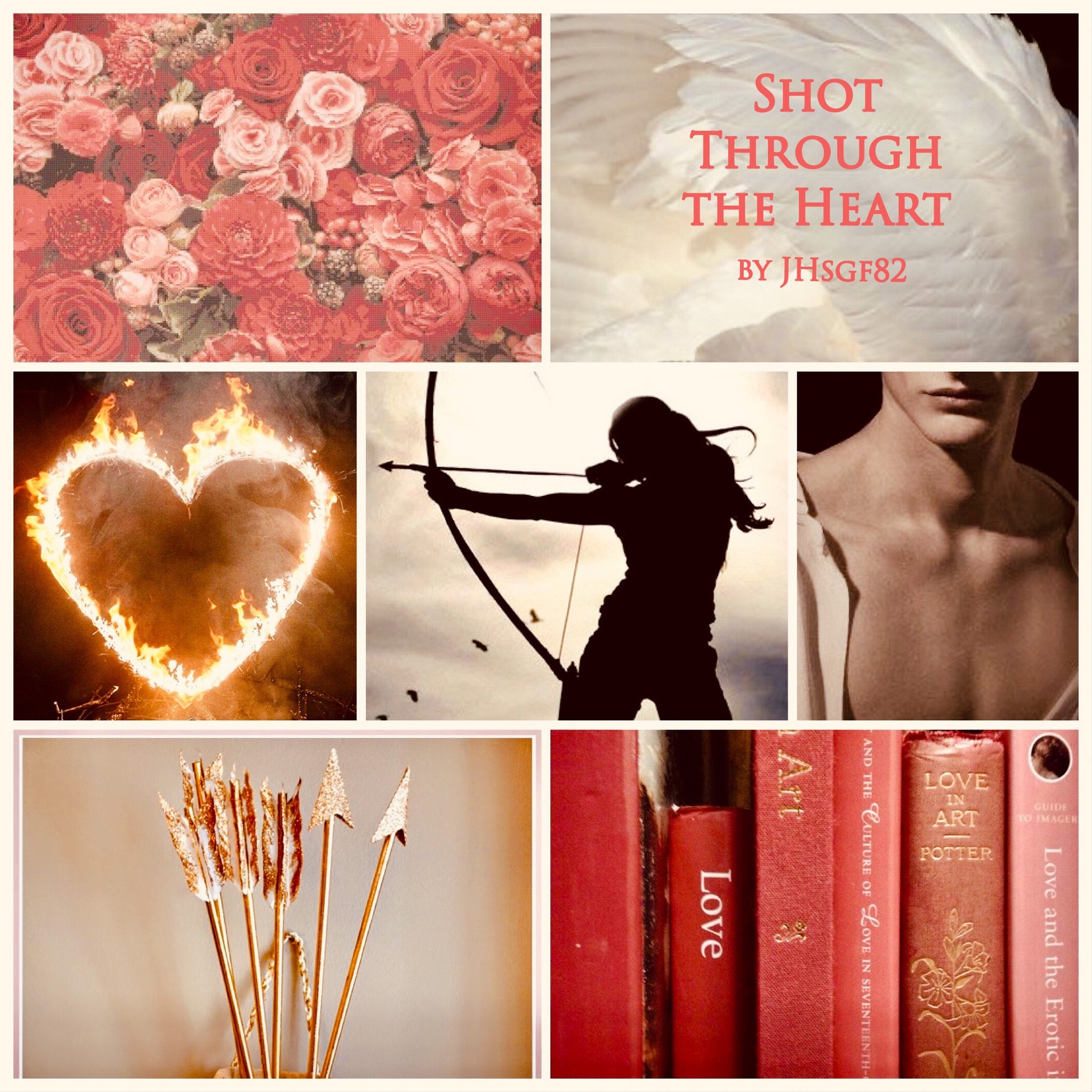 “All you had to do was shoot him.”

Katniss rolled her eyes as Finnick Odair circled her, his muscular arms crossed tightly over his bare chest. Finally, he stood before her; he clicked his tongue and cocked a brow. “So, what happened, Everdeen? I gave you one job.”

“Don’t start with me, Odair. I was doing you a favor,” she bit out. “So you could spend the entire day with Annie. …Like you don’t have all of eternity for that...,” she said the last part under her breath.

Your hearing is just fine, Odair.

“Nothing,” muttered Katniss petulantly. If Finnick was going to treat her like a child, she might as well act the part. He had no right to treat her as such, though; he wasn’t that much older than her, only a few hundred years.

“There’s never enough time,” said Finnick, grinning. Then he flicked one of her dangling arrow-shaped earrings. “Once you fall in love, you’ll understand, Katniss.”

“Oh, I wouldn’t!” said he, holding up his hands in surrender.

“Right,” she mumbled. “Good.” She paused a moment. “Because you know I already have a beau.”

“You’re talking about Hawthorne, right?” Finnick snorted. “Oh, please, Katniss. There’s nothing romantic between you and that demi-god.”

“How would you know?” snapped Katniss.

“Hellooo!” Finnick held out his arms in presentation of himself. “God of love, nice to meet you.” Cheekily, Finnick stuck out his hand, and she slapped it away, scowling hard.

He was right, of course. But Katniss didn’t want to admit it‒that she and Gale were only friends, and that she couldn’t bring herself to think of him otherwise, as much as her father might desire it to be so.

“So, then, Katniss. Stop avoiding the subject and tell me. Why didn’t you shoot the boy? I find it hard to believe your aim was lacking.”

“Distracted?” Finnick smirked. “By what, may I ask?” His sea-green eyes seemed to pierce through her, straight into her soul… “Or, perhaps it was a who?”

Katniss drifted back to mere hours prior…

She’d seen the mortal boy in the clearing where she was told he would be…he was washing a white, powdery substance out of his shirt and hair…

“What?” She’d scarcely realized she’d been retelling the events aloud.

“The white substance is called flour. It’s used to make bread. The boy is a baker.”

“Oh.” She pondered a moment. “Kind of like Hestia?”

“Kind of,” chuckled Finnick. He then urged her to continue her story.

Unbidden, Katniss poured out her tale, about how she’d become mesmerized by the boy’s golden locks and lashes and his pale skin shimmering in the sun while he bathed his upper half…

“He was…beautiful. The look of him…it made my heart begin to race like horses in a chariot race,” she placed a hand on her chest, “and my skin grew moist. It became harder to breathe, somehow…” She hadn’t even realized such a thing was possible; however, she had been told things were different in the mortal world, even for gods, and especially for lesser ones such as herself.

She admitted to Finnick how she’d taken her time watching him, finally growing flustered and shifting in her spot high in the apple tree. Only, she shifted too much, and she fell from that tree, landing with a thud.

Although it hadn’t hurt, the noise had alerted the boy, and he’d come running.

“He told me not to be afraid. Said his name was Peeta. He was looking at me, offering to help me. His eyes were as blue as Poseidon’s kingdom. …Before he could touch me, I panicked and disappeared.”

Once she’d finished her tale, Finnick stood there, appraising her. “I see.” He cleared his throat. “You must tell me something, Katniss. Did one of my arrows prick or scratch you?”

“What? No!” she exclaimed defensively.

“Why? Why is it interesting?” Her silver eyes followed Finnick as he paced back and forth. “Don’t you think I’d be more careful than that?”

“Hmm.” Again, Finnick noted how interesting it was; then he began muttering things she only half-heard, about it not being the arrows and how it did happen for ‘real’ sometimes, without his assistance.

“Not the arrows? Wh-what are you implying?” she stammered.

Finnick squared his shoulders to face her. “Oh, nothing much,” he quipped, the corners of his mouth tilting upward, “just that it sounds an awful lot like love to me.”

“Tis’ the one in love who does not realize it who is truly the fool.”

He laughed. “Poetry? Was it not practically a sonnet you recited about the mortal?”

“Hardly! Don’t lump me in with you; just because you fell in love with a mortal doesn’t mean I ever will.”

Finnick sighed. “Methinks she protest too much.”

“No one falls in love at first sight without the aid of your arrows, Finnick,” grumbled Katniss.

Before she could protest his haughty expression, he went on. “Regardless, something must be done about the boy.”

Katniss nodded her agreement. “So, what do we do? You don’t think the boy will talk about what he saw, do you?”

Finnick shrugged. “Hard to say. But worry not. It’s easily taken care of.”

“Really? How?” She eyed Finnick suspiciously. He was the god of love, not war, so it wasn’t like she was worried he’d try to harm the boy, Peeta, but for some reason, she felt an odd sense of protectiveness for him.

“Well, there are several options. The easiest, I suppose, would be to call in a favor to Morpheus and have him slip the boy some sleep syrup, convince him it was all a dream.”

For some reason, Katniss didn’t like that plan, either. “I don’t know. What if…maybe I could…go to the boy and talk to him, ask him never to tell a soul.”

“What in Hades is so funny?”

“You wish to see the boy again.”

“Then why offer to visit him?”

“Because I…well, I don’t think it’s right to drug him,” said she.

“And what would you do?” he posed.

“Reason with him. Threaten him if need be.”

“Well, that doesn’t seem much better. Doesn’t exactly qualify you for the job, now, does it?”

Katniss stared down at the bow in her hands.

“Your mistake needs rectified, dearest Katniss. Or, at least dealt with.”

“What say do you have in the matter?” She huffed. “You have no right to judge me. You’re not infallible, either, Odair. You couldn’t even make a love connection for Peet‒the blond mortal boy.”

“Oh, Katniss,” Finnick smirked devilishly at her. “I think I just did.”

I might continue if there is interest, inspiration, and time. For now, she's a one-shot.