Peeta Mellark knew the moment he saw the love of his life. Problem was, he was a boy, and she was a woman. A six-year age gap was a lot when you're twelve, but really, what did age matter when it came to love? Despite his brother and friends' discouragement, Peeta sets out to get Katniss Everdeen, the lifeguard, to notice him.

Based on the made-up fic title prompt: Sunscreen. 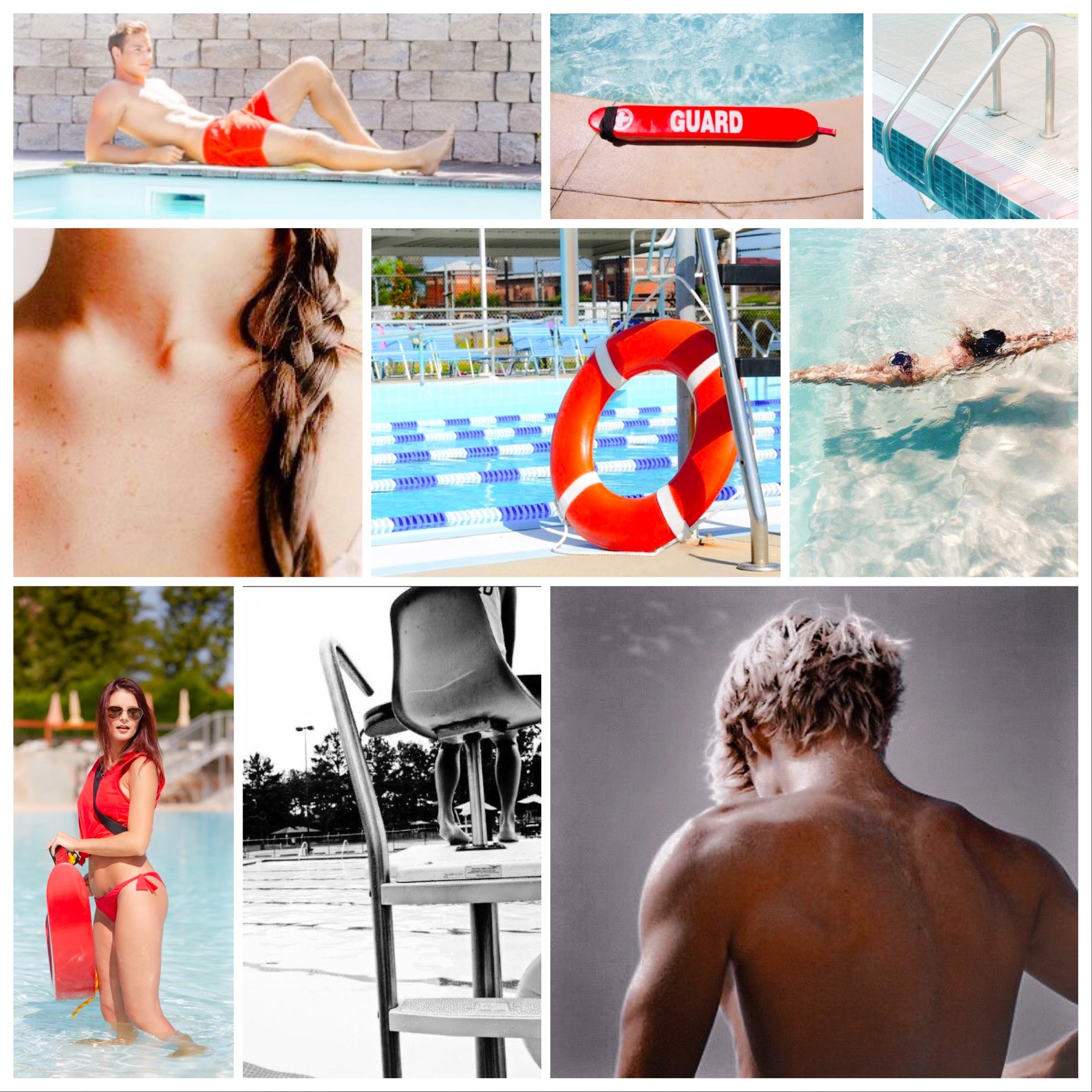 It was the summer of 2014 when I first saw the girl I was going to marry. She was gorgeous‒dark hair, sun-kissed olive skin, long, lean legs, and…and…her…well, let’s just say she was a real woman. She had a pretty face, too. And the most amazing eyes. Katniss Everdeen. Yeah, she was every boy’s fantasy come to life…well, at least mine.

Katniss was one of the lifeguards at the pool my friends and I frequented. The best one, too. While some of the others didn’t pay much attention, were too busy reading or on their phones or flirting or applying sunscreen, she was always alert, always watching over her little district.

As for me, I was always watching her. Not in a creepy way. Just, you know, observing. I’d watched Katniss from afar for weeks, trying to get up the nerve to go over and talk to her. Thing was, she was at the glorious, prime age of 18, and I was a scrawny twelve-year-old. And wouldn’t you know it if my older brothers and friends didn’t love to remind me of it!

One day, she caught me staring at her.  I'll never forget that moment.  She tipped her sunglasses ever so slightly, revealing those beautiful gray eyes of hers. I opened and closed my mouth several times; I must have looked like a fish out of water, and I was probably a sickly pale.

“Hey, kid, you alright?” she hollered over. And I froze. Oh, my god. Katniss Everdeen just spoke to me. She called me ‘kid,’ which I wasn’t too fond of, but she talked to me!

Gulping down the knot in my throat and shielding my eyes from the blazing sun, I looked up at her, and I nodded dumbly.

“Who’s that?” I asked, a scowl tugging at the corners of my lips.

Bran followed my line of sight to the bronze-haired guy sitting way too close to Katniss.

I narrowed my eyes at Finnick, even though he hadn’t noticed me, and I stuck my chest out slightly. “What’s he doing sniffing around my lady?”

“Your lady?” Bran burst into laughter, and my cheeks burned in embarrassment. I slugged him in the arm. Of course, it was no use hitting Bran. My jerk of a brother was practically made of iron, so all I did was make my own fist sting. He didn’t even flinch. “Since when is she ‘your lady,’ little bro?” He ruffled my curls. I hated that.

“Since always,” I huffed brattily, shoving his hand away. “I’m gonna marry her someday.”

Bran laughed so hard he was fake-clutching at his stomach. “Yeah, good luck with that, Peet.”

“Why are you laughing?” I demanded; although, in my heart, I knew I was being ridiculous.

“Well, because…,” Bran’s body shook in silent laughter, “because…I mean…look at her, Peet.” He motioned to Katniss.

I know…I’ve been looking…

“She’s…well,” he rotated his hand in the air, “you do know she’s six years older than you, right?”

Bran barked out another laugh and slapped me on the back, lurching me forward. “You’re too funny, little brother. Love. Heh. You really think a hot, older girl is gonna look twice at a pipsqueak like you?”

“And you think she’s gonna wait around for you?”

“Maybe!” I spat. However, my heart sank with his words. By the time I was grown up and good enough for Katniss, she’d undoubtedly have a boyfriend. Maybe even be married. Time was not in my favor. But I wouldn’t give up so easily. I just needed to make an impression on her, show her the effect she had on me…

Bran had finally stopped laughing, but I was still giving him a death glare. I wished I could melt him with my eyes.

“Oh, well, who knows?” He clapped me on the back again. “Maybe she’ll still be single when you’re all grown up.” Clearly, my brother did not believe that and was just humoring me. “As for Odair, he’s a cool guy. I don’t think he’s interested in Katniss. I saw him making out with Annie Cresta behind the snack stand. So, that’s good news for you, anyway, because even if you were all grown up, there’s no way you’d stand a chance against Finnick Odair.”

I took another long look at Katniss. She was so beautiful…how did she get to be so beautiful? Why? It wasn’t fair. Did she know what she did to me?

Suddenly, I couldn’t stand it anymore. I puffed out my chest, brushed my curls out of my eyes, and took a step forward.

“Peet, wait, where are you going?” Bran called after me.

“Going to talk to Katniss,” I shot back over my shoulder.

I didn’t listen. Maybe I was walking into my own death, and surely, Katniss would shoot me down immediately, but I had to try. As Bran had so delicately pointed out, a girl like Katniss wasn’t going to be on the market for long. I didn’t even know if she still was. But people always told me I was a charming boy, that I had a way with words, so maybe, just maybe I could charm Katniss Everdeen a little.

Teaser/Synopsis for Next Chapter: Lifeguard Katniss usually minds her own business, but when she sees a handsome, broad-shouldered blond guy with the palest skin she’s ever seen getting toasty in the summer sun, she feels the urge to warn him about the dangers of sun exposure, and she slips him a tube of sunscreen. The cheeky guy asks her to help him apply it, and not just that, but to teach him how to swim. Well, she appreciates a guy who can admit when he’s not good at something, and she has to admit, she likes em’ kinda vulnerable. Not to mention, ever since the sunscreen, her fingers have been itching to touch him again. What she can't put her finger on is why he looks so familiar to her.