You Cast, I Charge

Dean Winchester just wants to fix cars and work in his garden, maybe use whatever mojo he has to pop a top when he can't find his bottle opener. Sam was the ambitious one, the powerful Warlock and Coven darling, though nothing could save him in the end (or so it seems.)

After averting the apocalypse, the Angels have questions about what happened to their brother in Stull Cemetary and as a natural witch, the Grand Coven is obligated to provide protection, though it's clear to Dean they'd rather see him rot.

And then Castiel walks into his shop.

Super duper thanks to JenniferB for the AMAZING artwork that goes along with this story and a big, big thank you to WriteMeALoveSong for the beta! 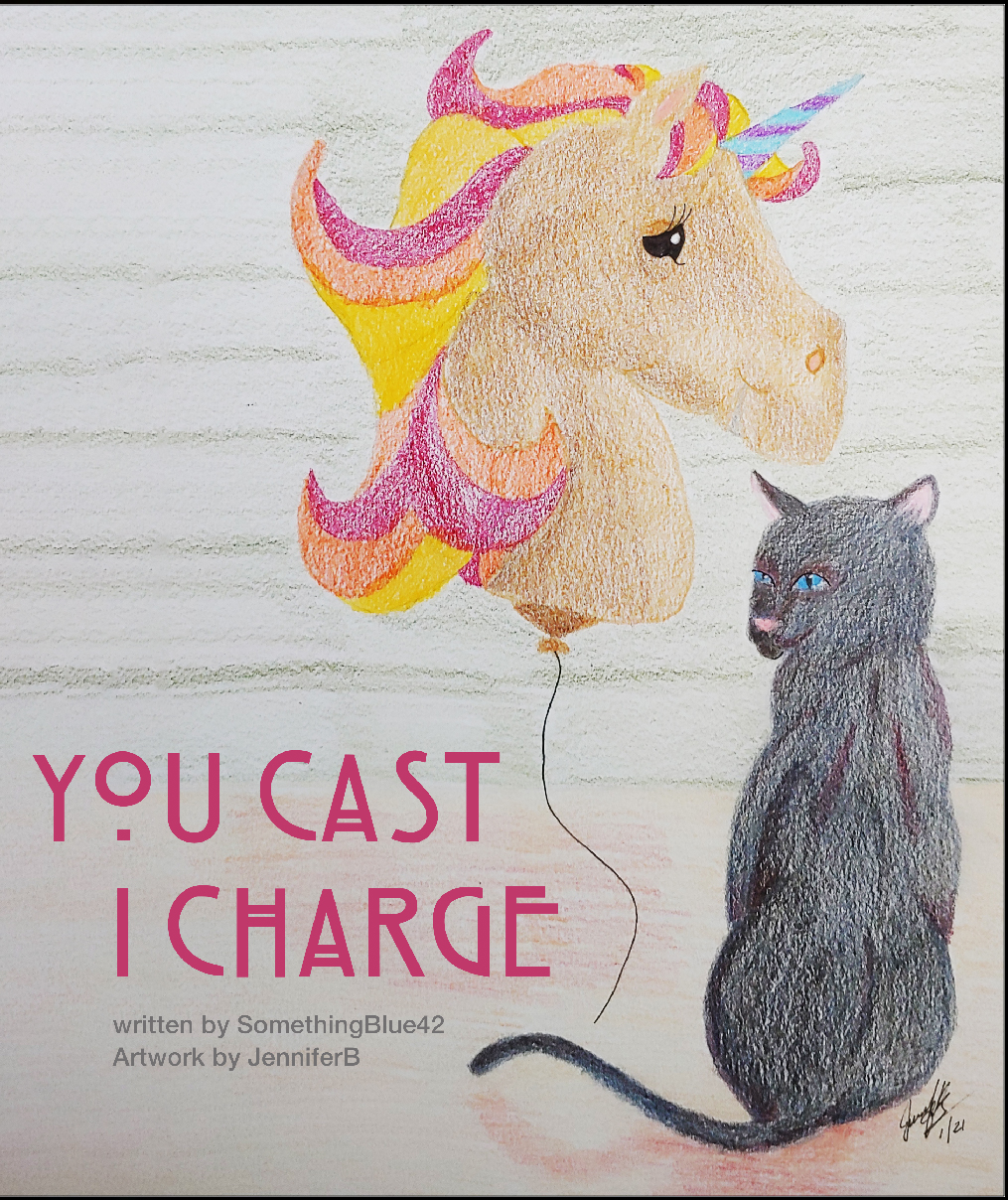 Dean was under the hood of a late model sedan when he felt a shift in the air that made the hair on the back of his neck stand up. He rested his hands on the frame, tilting his head to glance towards the front of the shop, eyes narrowing infinitesimally. The kid he hired for the front desk was visible through the tempered glass but whoever he was talking to wasn’t. Jack smiled at something the visitor said, then laughed, brushing at his shoulder as a mylar balloon bumped against him from behind.

Dean grabbed a rag, wiping at his hands as he took measured steps toward the front office. The balloon bumped against Jack again, the kid ignoring it this time, and Dean could hear the rumble of a low voice though he couldn’t make out what it was saying. Dean pushed the door open, head bowed, muttering a near-silent Christo under his breath as he stepped in.

When he lifted his head again, he took in a startlingly handsome face before sweeping up, but there was no aura around the man in front of the counter. Dean looked down again as if concentrating on wiping at his hands while he pushed himself outward, using his power as if scenting the air.

“Jack, go let the delivery guy in.” Dean gestured over his shoulder, still looking at his hands, then glanced up when Jack didn’t move. The subtle color around his head was shifting from goldenrod to a muddy purple, but Dean didn’t need to read his aura to know the young man was confused. His face showed that plainly.

“But-” Jack was cut off by a shrill ring from the very back of the shop, muted by the thin wall separating the garage from the front office. Jack shook his head. “I dunno how you do that, man, but it’s freaky.”

Dean chuckled and clapped him on the shoulder as he passed. When Dean looked at the visitor again, he was still smiling but felt it slowly melt from his face when he found the stranger focused on something over his shoulder. His eyes were an unsettling blue, and they tightened as his head tipped to the side, curious. Dean followed his gaze and landed on the balloon that now hovered just behind the desk at eye-level, the cartoon unicorn’s eyes seeming to stare back. Dean cleared his throat as he grabbed the string and tugged it back, maneuvering it over the credenza behind the desk.

“Who’s birthday?” The stranger’s voice was like gravel crunching under snow tires. Dean glanced over his shoulder again at the offensively pink balloon emblazoned with “Happy Birthday.”

“m’ brother’s.” Dean felt the balloon drift into his shoulder. He twisted his mouth to the side and let out a short puff of air that pushed it away from him. “Help you?”

The visitor remained silent, eyes searching Dean’s, and Dean could feel something pass through his mind like a specter, but it was gone before he could put up any real form of defense. The stranger crossed his arms and brought a finger to his full bottom lip, regarding Dean curiously.

“You offer services other than mechanics, yes?”

Dean blinked. “We do bodywork, yeah?” He crossed his arms over his chest, shifting on his feet as he straightened to his full height. “You got a body that needs fixed?” Dean gave him a once over for good measure and tried to ignore the fact that he liked what he saw.

A smile threatened at the corners of the stranger’s lips. “Perhaps… Though I was referring to your apothecary services.”

The balloon bumped Dean’s shoulder again, and this time he whacked it behind him with the back of his hand. “What did you say your name was?”

Dean’s eyes were weary, tilting his head to glance at the man’s palm before slotting his hand into Castiel’s grip. As soon as their skin touched, it was as if they’d been sealed together, bodies jerking backward like the connection was simultaneously trying to blow them apart and hold them together. The air was electric, lights flickering and a gust of air from nowhere sent a carefully sorted stack of invoices fluttering around the room.

Then, just like that, it was over. Their hands sprung apart as if each was the opposite end of a magnet. Castiel looked down at his palm, flexing his fingers with a tilt of his head and a look of serious contemplation on his face. Dean could only gape back at him. When Castiel shifted as if he were going to take a step back, Dean’s hand shot out, closing around the other man’s wrist, and those intense blue eyes crashed into green.

“What are you?” Dean demanded, feeling the warmth of Castiel’s skin (not a glamour) and the thrum of a pulse under his thumb (not dead).

A sharp thwack from the corner turned both their heads, finding an old shop broom now on the floor. Dean swallowed, and Castiel hummed, gently twisted his wrist from Dean’s grip. “Company’s coming…”

Dean looked over at him, and Castiel tore his gaze away from the broom to meet the other man’s eyes. A look of understanding passed over Castiel’s face before he tipped his chin up, sucking a breath in through his nose as if steeling himself.

“I’m not gonna ask you again.” The threat was out of Dean’s mouth before he realized he was going to say it and his brows creased at the realization that Castiel had reacted before Dean’s threat had even passed through his mind.

Castiel held up his hands and took a cautioning step back, his eyes holding Dean’s. Everything about the man was signaling that he was no threat as if Castiel could sense that Dean’s fingers were beginning to tingle, that the back of his neck and the base of his spine were growing warm as he drew his power forward. But that was impossible.

“You’re going to get a visit from Rowena-”

“How do you know Rowena?” Dean’s voice was sharp as a slap. Castiel pressed his lips together, pumping his hands gently. Dean swallowed again, recognizing the gesture as one Sam often used to get him to calm down. Dean shifted from foot to foot.

“She’s an acquaintance.” Castiel’s voice was a calm rumble, and Dean felt oddly soothed. “I’m sorry for… I didn’t mean to cause you distress.” Castiel’s eyes flicked back over Dean’s shoulder. “I just needed to see… something for myself.” Castiel took another cautious step back and bent ever so slightly at the waist, but his eyes continued to hold Dean’s. “I’ll go now.”

Castiel turned to exit, his hand twisting over the doorknob though Dean noted he hadn’t actually touched it. At least that explained why the wind chimes in the shop hadn’t sounded. The balloon was back at Dean’s shoulder, hovering close so that the string brushed over his forearm.

“What do you think?” Dean muttered, not turning his head, still watching Castiel through the glass as he walked across the lot, looking both ways before he crossed the street.

The balloon merely bobbed in the air. Dean snorted and rolled his eyes.

“Right, listen to what Rowena has to say. Because her advice has been so helpful thus far.”

Dean glared at the stupid cartoon eyes before turning to bang open the door and head back into the garage.