He kicked ass for the Lord

An alternate ending to Peter Jackson's classic horror comedy, Dead Alive (Braindead). The fight between the kung fu priest and the zombies goes slightly differently than in the film.

It was a dark and cloudy night. Things seemed to be normal, if a bit boring, that is, if you could ignore the ear-piercing screams coming from the graveyard.

A man screamed in gastly horror as he was pulled by his balls into a grave with a newly resurrected zombie. Blood began to spew from all sides as the man was eaten alive and his struggles seemed to do absolutely nothing to delay his inevitable fate.

The man’s two friends witnessed his fate and did the only thing that they could think of that seemed sensible, they ran straight out of the graveyard.

A man named Father Mcgruder was taking his nightly stroll across the patio ended up spotting the screaming man and there was only one set of words that came to his mind as to what he saw.

“What in God’s name is going on here?” exclaimed the priest, before running towards the graveyard to investigate the cause of this chaos.

Meanwhile in the graveyard, a man named Lionel continued to back away from a group of three newly resurrected zombies in an attempt to keep his flesh on his bones, but this appeared futile when he felt his back hit a wall.

Suddenly, Father McGruder back flipped into the graveyard and stood there, staring at the zombies with flashing anger in his eyes.

“The devil is amongst us” said the ninja priest before doing another awesome flip and landing right in front of the defenseless man.

“Stand back boy, this calls for divine intervention” said Father McGruder before doing another flip through the air and kicking one zombie in the chest. The kick sent the zombie flying through the air and the power behind the priest’s kick was so great that it caused the zombie to burst into bright orange flames. After a while, the zombie was nothing more than a pile of ashes.

“I KICK ASS FOR THE LORD!” exclaimed the kung fu pastor

The two other zombies both looked at each other quizzically before lunging at the martial arts practicing preacher. The pastor just responded to this by punching both zombies in the face, faster than the speed of sound. The punches that the father threw were so strong, that the zombies were sent flying through space until they ended up crashing into the sun and burning up in the heat of sun’s surface.

Father McGruder then dusted himself off and said “I’ve done the Lord’s work” Suddenly a spaceship crashed into the earth and from this ship, exited the iconic movie monster, the Predator!

His smirk grew bigger when over a bajillion more predators began exiting from the crashed spacecraft, like an intergalactic clown car. After a few minutes, there were enough predators surrounding him to fill up the entirety of China.

The spreader of God’s word just nonchalantly asked “is that all you’ve got?”

The kung fu preacher then reached into one of the pockets on his robe and pulled out a baguette and a bottle of wine. He then said a quick prayer before he opened up the bottle and dipped the baguette into the wine. The baguette then burst into blue flames and the pastor’s eyes lit up in a series of flashing rainbow colors.

“Now lads, prepare to face the awesome might of the Lord almighty!” said the pastor.

The priest then slashed his holy baguette at the Predators and the very second it touched the mask of one of these hunters, a universe size explosion was created by the force of the baked good. Predators screamed in horror but they were soon silenced as they were eviscerated by the combination of bread and wine.

The explosion then died down and it was evident that an entire species had just been wiped out through the blood and body of Christ.

Father McGruder then looked at the carnage before him, before taking a sip from the wine bottle and saying “body of Christ”

The planet mars then exploded into a colorful pile of fruity pebbles due to the coolness of the pastor’s one liner.

Father McGruder then turned around to leave but suddenly, a green portal opened up in the middle of the cemetery and every single Marvel and DC superhero exited from the rift. I’m not going to describe it to you because that’s way too fucking many characters to keep track of so just use your imagination.

The army of heroes stared down Father McGruder and he stared back, his badass aura managing to overpower them and make them feel a bit unnerved. The stare down ended when Superman stepped forward and said “Father McGruder, you’ve wiped out a whole entire species and for this crime, we’ve come to destroy you and your whole world.”

Father McGruder just laughed and said “the only one who’s allowed to judge me is the Lord himself, so if you aren’t him then get off of my planet.”

The coolness radiating off of his taunt was so amazing that it immediately caused Batman’s head to explode into a pile of cinnamon toast crunch.

Superman then said “very well then”

The Justice League and the Avengers immediately jumped into action and came at the preacher all at the same time, but the ninja of God was ready for them. He reached into his robe and pulled out the classic video game gun, the Super Scope. The mighty priest then fired a blue beam from the SNES gun and vaporized both teams with one shot. “Now I’m really playing with power” said the priest.

The Justice League and the Avengers were now nothing more than flaming ashes, but the fight wasn’t over just yet.

The Justice Society of America, the Teen Titans, the all-winners squad, the X-Men, and the Watchmen all lunged at the kung fu pastor, every single one of them ready to beat the ever-loving shit out of God’s chosen warrior.

Father McGruder just laughed a hardy laugh before he tossed his Super Scope into a volcano and pulled out the manliest weapon to ever be created by mortal hands, the Power Glove!

The pastor then flipped into the air before punching the first superhero he saw square in the face, Doctor Manhattan! The force behind the Power Glove, combined with the pastor’s sheer badassitude caused the good doctor to explode into a colorful heaping pile of gummy bears. The explosive gummy bears then scattered across the battlefield and struck every single one of the comic book heroes in the face at the same time and caused all of them to explode into multicolored piles of LEGO bricks.

The priest then took a single breathe of relief, but only one since he had barely even exerted himself for this entire fanfiction.

Father McGruder was then about to turn and go home but before he could, a wooden coffin suddenly rose from the cemetery. The coffin then swung open but it wasn’t a zombie who came exited from this sarcophagus, instead it was the famous movie director Peter Jackson!

“Father, I’ve come to put an end to you once and for all in order to set the universe straight once again” said Peter Jackson

The pastor just reached into outer space and pulled a rocket ship out of orbit. He then lit a match and smoked the rocket ship like a cigar before blowing smoke into the director’s face and saying “not gonna happen bub.”

Peter Jackson then pulled out a chainsaw the size of the empire state building and slashed across the pastor’s chest, causing blood to spew from his body.

The pastor fell to the ground, having been overpowered by the famous movie director. Even though he was dying, at least he managed to kick ass for the Lord while he was alive.

The dark and cloudy sky suddenly started to lighten up as a celestial being began to descend from the Heavens among the battle taking place. This being then landed on the ground and Father McGruder immediately recognized who this was. He was staring into the face of Jesus Christ himself!

“Father McGruder, you have kicked numerous asses for the Lord our God, and the Almighty Father has decided to reward you for your efforts” said Jesus. Jesus then reached into his robe pocket and pulled out the Kamen Rider W belt. He then presented this weapon to the ninja of God and said “put this around your waist and the two of us will be one”

Father McGruder did as he was told and strapped the belt around his waist. He then began to feel a power unlike any that he’d ever felt before.

A blinding flash of light illuminated from the belt and a sheen of green and black armor then attached itself to Father McGruder’s body.

McGruder and Jesus had successfully fused together to become Kamen Rider W! 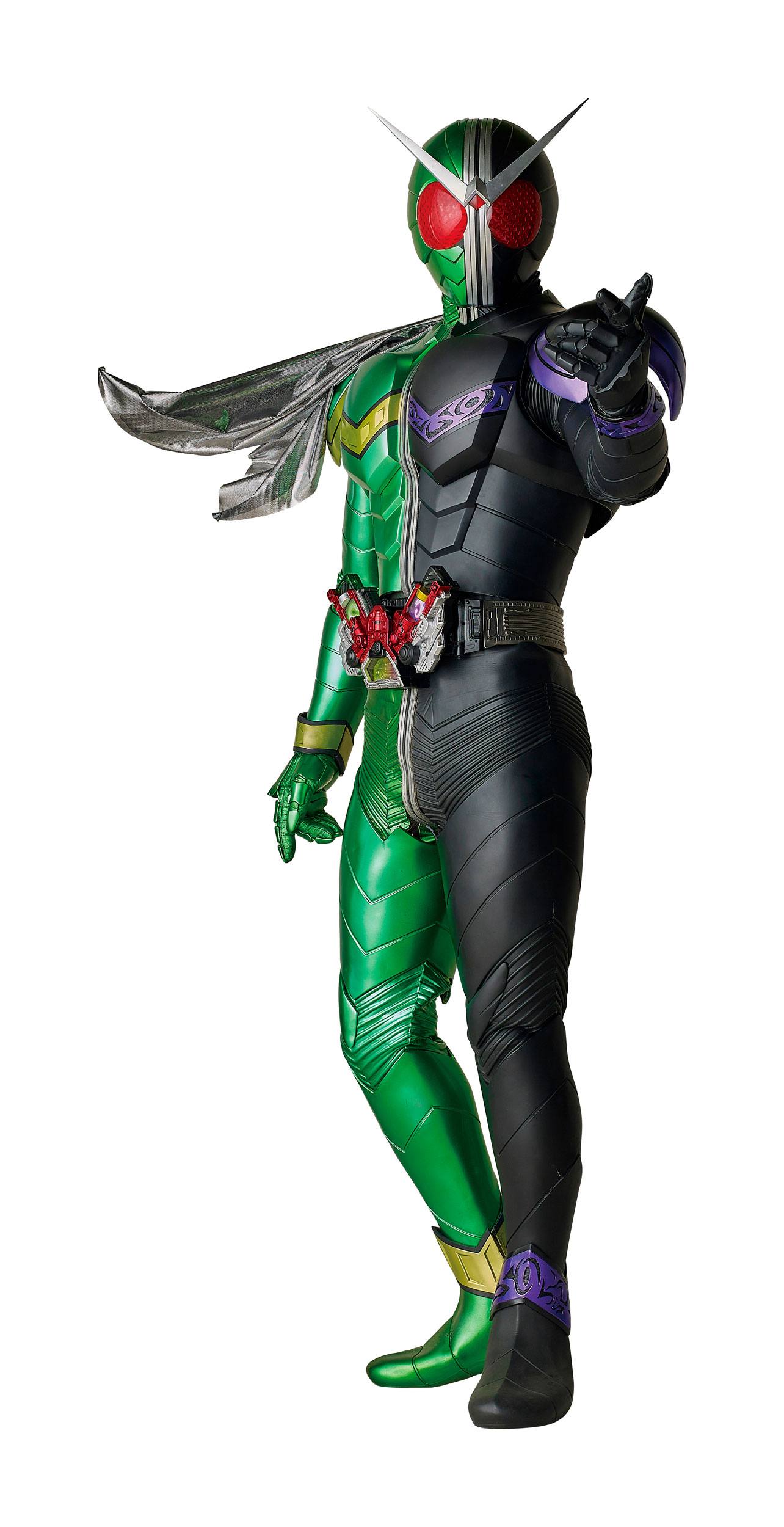 “Now, count up your sins” said Father McGruder and Jesus in unison.

Peter Jackson didn’t say anything, he just ran towards the newly fused hero and began slashing wildly with his chainsaw. Every single slash that Peter tried to make on the Kamen Rider was dodged, bobbed and weaved through and this caused Peter to grow more and more frustrated by the second.

The film director kept on slashing and slashing but every single time, it would be evaded by the fused hero until eventually, Peter was drained of all his energy and passion for his craft.

Peter dropped his chainsaw on the ground as he panted and wheezed heavily. Every single breathe he took was a monumental task to undergo.

Kamen Rider W then quit dodging and said to him “this is why you don’t ever fuck with God’s chosen one.”

The Kamen Rider then raised his right leg up in the air before bringing it down and chopping Peter Jackson in half. The two halves of the film director then spewed out an insane amount of blood that was enough to flood the entirety of Scotland three times over.

Father McGruder and Jesus then unfused with each other and the pastor said “Oh mighty Son of God, what do we do now?”

The ninja of God and the son of God both pulled out electric guitars and began jamming out hard. The sheer awesomeness of their playing was enough to get every single woman in the multiverse pregnant at the same time.

TheSweetStranger as well as 3 guests left kudos on this work!