Episode 73: Koala Chlamydia Is A Problem [My Brothers, My Sister and Me Excerpt]

The Jin Siblings are not experts and their advice should never be followed....
An advice show for the modren era, hosted by our favorite band of half siblings. Suggested talking points: Bartholomew, The Bubonic Plague, and Stabbing Family Members

Behold. More madness. This was inspired by conversations with littlesmartart on tumblr for the FANTASTIC ARTWORK and the idea for the theme song, and thank you greenwitching for reminding me of the roasting session that inspired the one here. Thank you to everyone on Tumblr who has sent in ideas and clips, I am absorbing them like some horrible eldritch being and letting them percolate. 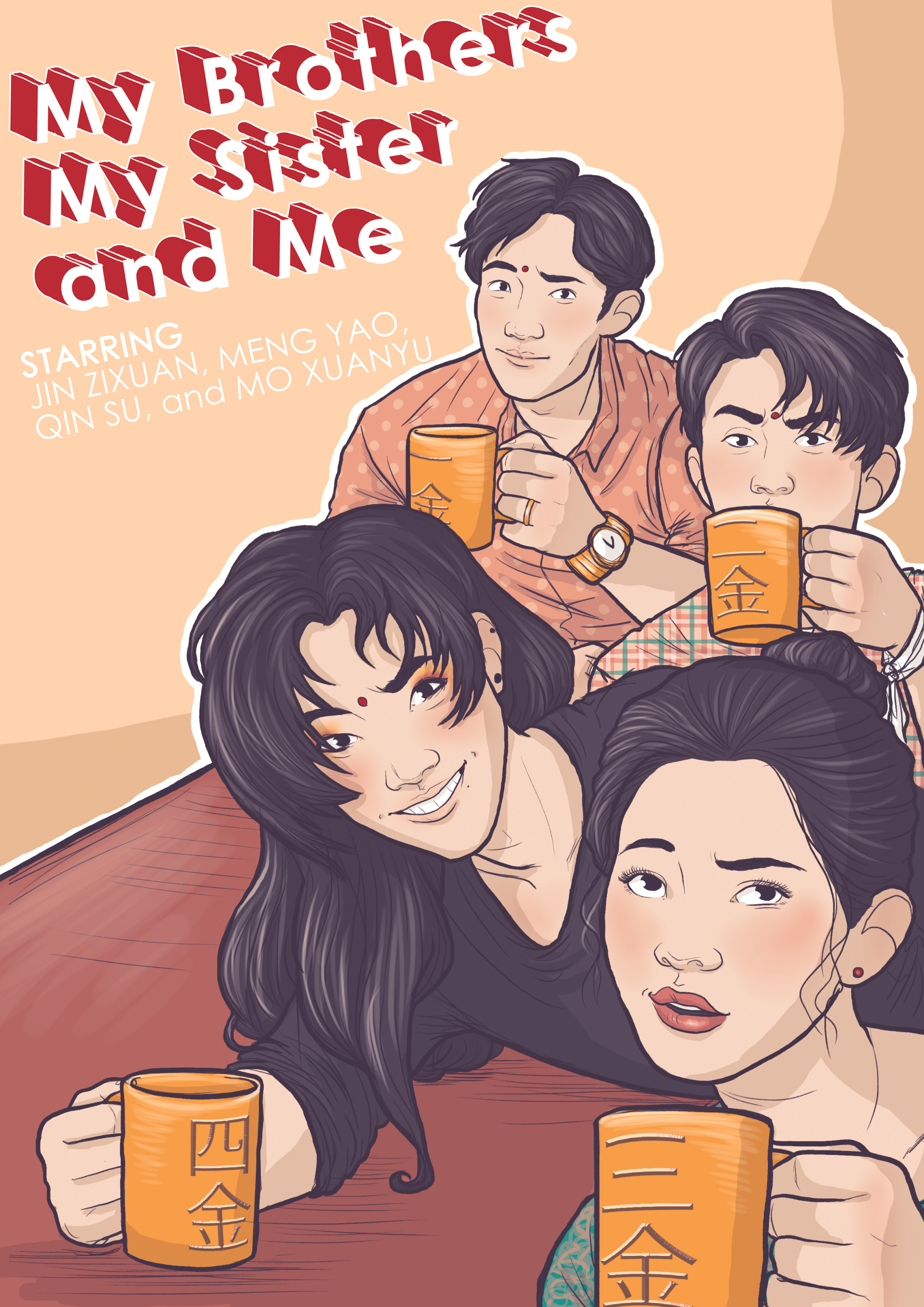 Jin Zixuan: Do we want another question?

Qin Su: Sure, yeah, got one right here. 'When I was younger, I was really skinny and weak'--hey! Hey, now, negative body talk, much! That's super judgmental of yourself!

Mo Xuanyu: And of us people who are skinny and weak right now! [teasing] Right, Yao-gege?

Meng Yao: [calmly] I'm not affiliated with you.

Qin Su: 'When I was a kid, I was really skinny and weak, so I made it my mission to get as jacked as possible so people would take me seriously. I put in a lot of hard work, changed my exercise routine and diet and it worked. But now, as an adult I'm a 6 foot 7 dude--'

Qin Su: '-- and a pretty intense resting face. I routinely make children cry just by existing and everyone shoots me nervous looks in the grocery store. It gets to me sometimes. I’m not a bad guy! I just look scary. What are some ways that I can make myself less intimidating?’

Qin Su: I mean, let’s see...puppies are unintimidating. Can you devise a system where you carry a few around with you at all times? Maybe in some saddle bags, everywhere you go?

Jin Zixuan: Sure, until they start pissing down your legs. Then you’re not just unintimidating, you’re the guy no one wants to stand next to at the bus stop.

Meng Yao: I mean, it still does the job, doesn’t it?

Mo Xuanyu: You could get a butterfly tattoo, like, directly on your forehead.

Meng Yao: Okay, please explain to me your thought process on how exactly that would make anyone more approachable.

Qin Su: They still want to be able to navigate human society, A-Yu.

Jin Zixuan: Let’s see...what makes someone approachable….Who is the least intimidating of all of us?

Jin Zixuan: [highly offended] Excuse me! I'm the oldest and definitely the tallest one here!

Qin Su: Please don't tell me you think that being tall translates into you actually being scary. You’re tallest by, like, 3 inches. At most, that’s just part of the equation of being scary.

Meng Yao: And the rest of Zixuan’s equation is just filled with collared polo shirts. Which absolutely tanks the intimidation ratio.

Mo Xuanyu: That doesn't tank yours, though.

Jin Zixuan: Excuse you, polos are weekend wear and there is nothing wrong-- I can be intimidating!

[crosstalk]Jin Zixuan: I can! Just because I’ve never had to intimidate you --

Mo Xuanyu: That shit is opened .

Qin Su: What? 'Spicier than mayo?'

Mo Xuanyu: [half singing, half chanting] ‘My mayo brings all the boys to the yard, and they’re like-- [normal voice] this is really underwhelming.’

Qin Su: Why do we always come back to food? Are our Skype calls haunted by starving Victorian ghost children? Are we possessed?

Meng Yao: It’s your own fault if none of you bother to eat before we record. You all had the schedule.

Meng Yao: [falsely happy] Hey, thanks! Thank you so much, A-Yu, love the level spike on that one. Editing mouth noises out of our podcast makes my day brighter.

Jin Zixuan: [under his breath] Just...unbelievable….You all….

Qin Su: [smiling] I think we broke him.

Meng Yao: [laughing] Zixuan is limping behind the conversation indignantly, brandishing his cane….

Jin Zixuan: I--! I am a high powered businessman! I am trained in martial arts and archery and swordsmanship --

Jin Zixuan: [forcefully] I am a CEO--

[crosstalk] Qin Su: [ignoring him] I think Yao-gege is somehow the most and least intimidating out of all of us at the same time, if we're all being completely honest with ourselves and our place in the world.

Mo Xuanyu: Aww, I thought I was at least a contender!

Mo Xuanyu: What does a kid have to do around here to be intimidating?

Meng Yao: Learn how to chew with your mouth closed, for one.

Jin Zixuan: [indignantly] A-Yao? Are you not going to deny this?

Jin Zixuan: Oh, come on! He's like...a little koala bear or something! How is that scary!

Meng Yao: -- koalas have smooth brains and eat poisonous leaves all day. Are you calling me a poisonous idiot bear?

Qin Su: [wheezes] Only in private.

Mo Xuanyu: [laughter trailing off] Wait, wait, hold on. Don’t all koalas have chlamydia or something?

Mo Xuanyu: Chlamydia! I think that I read--!

[crosstalk] Jin Zixuan: Oh my god, I think I’ve actually heard that. The plague, the bubonic plague, isn’t it? Or that--Some sort of--that disease people used to get where bits of you fall off?

Meng Yao: [voice strangled from laughter] Yes, A-Su, that ancient disease the French Revolution that all koalas have--

Jin Zixuan: [muttering] Aren’t we all….

Qin Su: [solemnly]  Armadillos and guillotines. Every damn minute of every damn day.

Mo Xuanyu: And I googled it, I’m right; koala chlamydia is a problem.

Meng Yao: And we’ve just found the title of this episode.

Qin Su: If most koalas have chlamydia, I feel like they have other problems they have to deal with.

Qin Su: Get them some damn sex ed! Use those eucalyptus leaves for protection!

Mo Xuanyu: Eugh, that menthol, though. Like Vicks for your dicks!

Meng Yao: I hate it.

[crosstalk]Jin Zixuan: [pained] PSA: don’t do that. Ever.

Qin Su: The voice of experience?

Jin Zixuan: I don’t think you actually want an answer to that, meimei.

Mo Xuanyu: Also I've been looking it up and mountain lions are the ones that can have the bubonic plague.

Qin Su: Well, at least the mountain lion could inflict some damage. Use it like a poison delivery system, like an anthrax letter to secretly infect people.

Meng Yao: [patient teacher tone] ‘A mountain lion is to an anthrax letter, like a koala is to a…?’

Mo Xuanyu: 'I can't come into school today, I got attacked by a mountain lion.'

Qin Su: [acting concerned] 'Oh my God, are you okay? Are you gonna have scars?'

Jin Zixuan:  Okay, glad we got our animal infections all sorted out--back to what we were talking about. So, riddle me this--

Mo Xuanyu: [laughing] I don't actually have anything today--

Mo Xuanyu: --but I'll get you next time.

Jin Zixuan: No, I need to know, genuinely, this is not a bit-- why do you think A-Yao scarier than me?

Qin Su: I mean, what's not scary about a smooth brained bear full of toxins and chlamydia?

Mo Xuanyu: Technically, they’re not bears, they're marsupials! And I think Yao-gege is more of an armadillo--hard on the outside--

[slight crosstalk] Qin Su: --And full of leprosy on the inside.

[crosstalk] Qin Su: Awww, A-Yu, we're being written out of his will again!

Jin Zixuan: Listeners, am I wrong? Am I crazy? He’s the size of a toddler--

Jin Zixuan: He looks like a sugar glider baby that got turned into a human man--

Meng Yao: ‘As acupuncture needles.’ There. Sent to the notary. Now, what were we talking about, again?

Qin Su: Da-ge, all those things might be true--

Qin Su: But here’s a test. What would you do to someone picking on A-Yu in school?

Jin Zixuan: [immediate, sounding businesslike and slightly aggressive] I would contact their parents and set up a meeting with the school officials and make it very clear that they are never to do that again.

Qin Su: [grinning] Okay. Yao-gege, what would you do to someone picking on A-Yu in school?

Meng Yao: [calmly] Absolutely nothing you could prove in a court of law.

[crosstalk] Mo Xuanyu: [lingering laughter] Yeah, it's that menace. Da-ge, you’re like--you’re like if a duckling--okay, you remember when I brought you to Hot Topic? You were like a duckling at a Death Metal concert.

Jin Zixuan: [defensively] The music was so loud--

Qin Su: You're like if a golf course got turned into a human.

Meng Yao You're what would happen if you gave mac and cheese a social security card and keys to a lamborghini.

Mo Xuanyu: [laughing] You're the lightly salted almonds of people.

Qin Su: You're like a wholesome Hallmark movie fucked the concept of the suburbs.

Jin Zixuan: [unamused] Sure. Sure.

Meng Yao: You emanate the peril of a box of lethargic kittens.

Jin Zixuan: Wow. My own family. This is coming from the physical manifestation of a My Chemical Romance song--

[crosstalk] Mo Xuanyu: [smug] You say that like it’s a bad thing.

Jin Zixuan: -- and the woman who cries at the Land Before Time every time she watches it. I think this is a case of glass houses, here. Let ye who are intimidating...

Qin Su: Oh, so we’re not roasting Yao-gege back?

Meng Yao: Not sure how me being compared to a STD riddled marsupial for about 5 minutes straight escaped your notice, A-Su, but alright.

Jin Zixuan: I feel that you are all being...heinously short sighted, here. Are you seriously trying to tell me that A-Yu is scarier than me, a full grown man?

Meng Yao: I would certainly be more warranted in my concern about him stabbing me than I would about you.

Mo Xuanyu: Oh my God, gege, that was like 5 years ago and I already said I was sorry--

[crosstalk] Qin Su: Did we actually help this person? I mean--

Qin Su: We learned a lot about exactly how disturbing the animal kingdom is, but….

[crosstalk] Jin Zixuan: No, go back--

[slight crosstalk] Meng Yao: Dress like a middle aged accountant, share minion memes on Facebook, and buy your son a puppy so you have an excuse to talk to the dog and not people. There you go. Done.

Jin Zixuan: No, rewind--Xuanyu, you stabbed our brother?

[crosstalk] Mo Xuanyu: It was only a little!

Jin Zixuan: How can you stab someone a little ?!

[crosstalk] Qin Su: Thank you so much for listening in this week--

Mo Xuanyu: It honestly wasn’t that bad, he made it sound like--

Qin Su: [brightly]  We hope you enjoyed our enlightening romp, here! We want to thank Sister Sledge for the use of the song We Are Family. A-Yu, how about that last Yahoo?

Qin Su: And this has been My Brothers, My Sister, And Me! Thank you to everyone, see you next week and remember; send your trash dad straight to jail!

I want to attempt a Taste of Luxury with Wei Wuxian and Mo Xuanyu as was suggested by some anons on tumblr and I keep going back and forth on whether it's more effective to stay in a transcript layout, or go full narrative, since the Taste of Luxury videos are visual. SO if anyone has suggestions, lay 'em on me!