Thanks to Joanna Sewu for their gameplay upload of The Endless Empty which I used as reference.
https://www.youtube.com/watch?v=OiEZEmeVlO4

In a collapsing world, two remnants of life traverse about, attempting to make it across the vast dessert of anxiousness. Much to their delight, the two beings, the physical form of identity only known as The Nothing, and a neuron named Trigger Finger managed to find a truck to aid their travels.

Though The Nothing remains mostly silent, the two eagerly discuss possibilities of a hopeful future, a future of safety. The Nothing decides to take on the name of Static, and Trigger Finger is purely delighted. Everything looks okay for now.

"Let's see if there is anything good on the radio," Trigger Finger calmly speaks as the knob on the radio is turned to release a melody; a rather bouncy tune with a variety of strings and unidentifiable sound effects.

Static glances down to the music-making device and stares. Perhaps it wasn't quite the musical melody they were expecting. Oh well, surely the song would be changed...

No one's changing it.

Static reaches out for the knob and-

"I like this one," Trigger Finger suddenly calls out much to Static's surprise. The neuron is still staring out the window, unaware of the failed attempt to change the music. Stunned, Static watches the neuron gleefully sway back and forth to the beat. They seemed quite content and happy listening to this music. So this was the kind of music a finger likes? Despite the strange usage of sound effects, there was a beat to it which made it easy to tap your fingers along to. Yes, a finger-tapping tune, of course the finger liked it! But did they know this might be the reason for their enjoyment? SHOULD Static say anything?

Static removes their hand from the knob and glances out the window. Now gently swaying their own head back and forth, the two remnants of life bob their heads to the beat of the radio while watching the green scenery slip by. 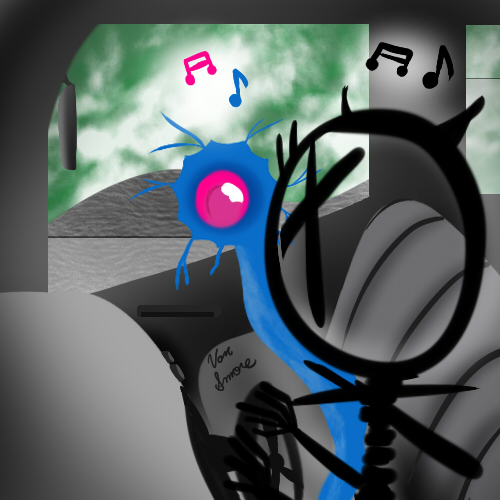 I actually really liked that "weird song." I remember searching all throughout The Endless Empty's sound files trying to locate it. I believe the song is called "Slip...?"
I wasn't really sure who was driving in the actual scene, but like, Trigger doesn't have hands... So... Static?

ninelives081 as well as 2 guests left kudos on this work!