Sunny could feel the warmth radiating from Basil, and he wanted nothing more than to lean into it.
Into the warmth of Basil's touch.
Maybe run his fingers through those blonde locks and listen to his heartbeat.

Didn't expect to ever write something myself, but here we are. :')
Joy, fear, sadness, courage, pain, hope. This game made me feel it all and I absolutely adore it.

This is my first fanfiction and English isn't my first language, but I still hope you enjoy reading this! ♥

Sunny rolled over in his bed and furrowed his brows. He didn't get a wink of sleep last night, but he knew this would happen.

Like the last couple of weeks, his mind kept wandering to the boy with the gentlest smile, and it made him feel all warm and fuzzy inside.

It didn't take him long to realize that something was different, but he didn't remember when he started feeling this way.

Sunny would get a lot shyer around the other. He would feel his hands start to sweat when near him and his face heating from the tiniest of touches. Like their shoulders bumping or their hands brushing occasionally.

It was so bewildering at first, but now he loved these little touches, craved them even.
He wondered if the other noticed anything, if he knew how Sunny's hand would linger on their's a fraction longer than usual.

If so, he didn't mention anything. And Sunny wasn't sure he wanted the blonde to notice or not.

Finally, the sun started to rise. The sky brightened, and the clouds were tipped with purple. He got up from his comfortable bed and paused for a moment to check the time.

There were still a couple of hours left before he would meet up with Basil. Thinking about his friend made him feel excited about their picnic brunch.

What should he wear? Should he do anything different with his hair?

Thousands of thoughts swirled around his head. Honestly, he never really cared before, but today was different. It was only going to be the two of them.

He was happy that Basil had asked him out for a picnic. Even if it slightly confused him why their other friends weren't invited.

Maybe he liked spending time with him the most? Perhaps he wanted to talk to him in private? He did say that Sunny was someone he could always depend on.

Thinking back to it made him happy.

Sunny knew he was grasping for straws, but he couldn't help it, being the dreamer he was.

Following his regular morning routine, several hours passed by eventually, with Sunny's thoughts always going back to his best friend.

Before he could get lost in his thoughts, his phone buzzed. He pulled his cell phone out of his pocket and checked the notification that had blinked up on his screen.

Speak of the devil, it was Basil.

Sunny sighed, his mouth turned up into a soft smile as he typed out a reply.

Realizing time was running short Sunny freshened up and went to the kitchen to prepare for their picnic. He made sure to bring plates, glasses, utensils, and napkins.

Just as he was finished, the doorbell rang.

It was just Basil; they were just going to have their usual picnic. Even if it's only going to be the two of them... It's not like this is anything special.
Basil just asked to hang out as friends. That was all.

Sunny shook his head, walked over to the front door, and took a deep breath before opening the door.

Basil was standing a few feet away; in his arms, he carried a picnic blanket and a small basket full of delicious fruits, bread, and all kinds of sweets.

Sunny looked up at his friend and was met with the brightest smile.
Oh, he was done for.

"Hi Sunny! Good to see you, how have you been? I know it's just been a few days since we last saw each other, but I was looking forward to today!"
Basil began rambling happily, and all Sunny could focus on were the plush lips of his friend's. They looked so soft and rosy, Sunny wondered how they would feel like on his own- Ah. No. Stop. 𝘍𝘰𝘤𝘶𝘴.
Sunny really needed to stop his thoughts from drifting so much.

"Are you ready to head out?"

Sunny nodded shyly and gave him a small smile.

They made their way to the town's park, all the while Basil was telling him about what he's been up to. Polly had bought him a new plant, and he was still thinking about what to name it.

Sunny chuckled. Basil had this cute habit of naming all of his plants.

"I was thinking about Camellia because it's a Camille and all, hehe. What do you think?"

Basil laughed, and ah... Sunny could swear there were butterflies in his stomach or 𝘴𝘰𝘮𝘦𝘵𝘩𝘪𝘯𝘨.

Once they made it to the park, Sunny placed their blanket under a tree, and Basil started unpacking the snacks and drinks he had brought.

"I bet Kel would eat everything in one go." He said jokingly as he sat down on his knees.

Sunny hummed in agreement and sat down beside Basil. Their shoulders bumped, and Sunny was hoping Basil wouldn't move away.

"U-umm, so what about you? What were you doing today?" Basil asked him, taking a bite from one of the fresh apples. His ears were flushed, but maybe it was only Sunny's imagination.

"Not much really, I had woken up an hour before you came." He lied matter-of-factly.

It's not like he could straight out say, "I laid in my bed trying to sleep but couldn't because you occupied my mind, and I just couldn't stop thinking about you."

"You are such a sleepyhead." He sighed fondly.

For a moment, Basil held Sunny's gaze, making the latter's heart race. The next thing he knows, there's a hand on his cheek. Basil leaned in closer, and Sunny's breath hitched.

"Ah, hold still for a sec," Basil whispered, and his voice was so close to Sunny's ear, it gave him goosebumps.

Sunny could feel the warmth radiating from Basil, and he wanted nothing more than to lean into it. Into the warmth of Basil's touch. Maybe run his fingers through those blonde locks and listen to his heartbeat.


The moment broke off too soon as Basil sat back again.

In his hand, there was a small ladybug. Basil smiled.

"This little guy had made himself comfortable on your cheek," Basil noted, releasing the ladybug into the grass.

"..." Lost in the whirlwind of thoughts, he didn't notice the way Basil was regarding him.

Sunny had always been a dreamer. He imagined countless scenarios with him and his friend and how they would hold hands on an autumn afternoon or how they would cuddle on the couch on a winter evening... Watching their favorite movies.

If only he was as brave in real life as he was in his dreams.

Sunny was pulled out of his thoughts by a cough.

"Y-you know... There's something I've been wondering about lately... A-and I could be wrong, of course! It's just..." Basil suddenly said.
He looked down for a second before meeting Sunny's eyes again.

His face was red, and his eyes seemed to search for something.

"Umm, so lately, I feel like you've been a little different around me..."

Sunny's heart dropped to his stomach. Did Basil notice after all?

Worried that he may have made the conversation uncomfortable, Basil hurried to explain, "Not in a bad way or anything just... You've just been acting unusual."

"A-and you are only like this around me...The truth is I have a hunch, but..." Basil's eyes bore into him, and Sunny was seriously considering running away.
But he knew this wouldn't solve anything. More importantly, he knew this would hurt Basil.

"Just now, for example...If I didn't know better, I would think you were disappointed that I didn't stay c-close to you." Basil finished, his face as red as the apple he just had.

Sunny felt the heat rise to his cheeks. He must look equally red right now.
How could this happen? Was he that obvious? ... Now that he thinks about it, they were best friends. Of course, Basil would notice, as small as the changes may be.
He was a lot more perceptive than he let on.

For a moment, both of them said nothing.

"I was...I still am...I like being close to you." Sunny admitted weakly, not daring to look up.

Basil squeaked. "O-oh! Haha, is that so?" He laughed awkwardly.
Noticing Sunny wouldn't meet his eye, he took a deep breath and approached him.

"You know, I-I also like being close to you."

Sunny stared at his friend in disbelief.

Was he dreaming again? It only took Basil to say these words, and Sunny's heart was beating so fast he couldn't get a decent breath.

Basil leaned in closer, his eyes slowly flickering from Sunny's anthracite eyes to his lips, then back up again.

He was much closer than before, and it took Sunny every ounce of his strength to not jump right into the other's arms.

Sunny shivered as Basil's hoarse voice rang in his ears, not quite believing what was happening.
He bit down on his bottom lip, nodding.

Without hesitation, he did as told and tried to steady his heartbeat.
His mind was spinning; he was nervous.

In the back of his mind, he knew what they were about to do would change things between them forever. Is this really okay? He was so scared to regret it. To lose what they have now.

But all thoughts were thrown off his mind as he felt soft lips on his own.

Basil's lips were velvety, almost silken, and Sunny could feel the soft tickle of his breath beneath his nose. An ambrosial and floral scent clouded his mind.

Sunny relaxed into the kiss.

How could this be anything but right? He wanted this much more than he realized. And if Basil felt the same way... Isn't that the only thing that mattered?

In between his ambivalent state, there was one particular emotion that shined through. He broke the kiss.

"Basil... I love you." The words came so easy, and with them, a weight lifted off his shoulders.

Basil's hazy expression shifted to a startled one. Liquid pools of electric blue gaped at him.

"R-really?" He teared up, his voice a mixture of uncertainty and hope.

Sunny nodded; there was nothing he was more sure about.

Thank you so much for reading!
I also have an Instagram account for Omori, it's @_.omori if you want to check it out. :D
I hope you have a wonderful day/evening! ♥️ 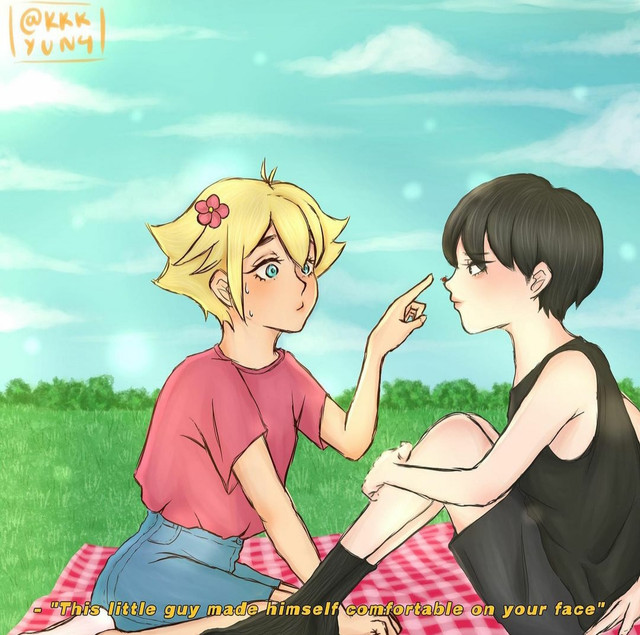 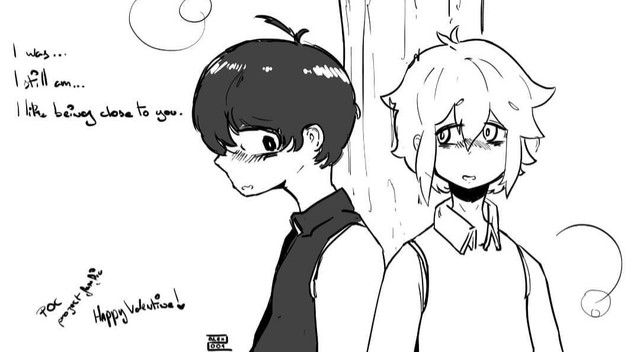 THANK YOU SO MUCH FOR THESE AMAZING FANARTS!!! 😭💞