Well, it's a bit of a complex sort of story. I mean, it's hard for a fellow to know where to begin. Was it when Dax finagled me into agreeing to get hitched? Or was it when my man Garak dropped callous words on my astounded ears? Or was it the hungry look in the Lady's eye?

Oh, it's no good: I'll just have to start at the beginning. Brace yourselves, and let Uncle Julian spin for you a tale that'll have your locks porpentinial in about two-and-a-half shakes.

(PG Wodehouse's 'Jeeves and Wooster' meets DS9's 'Garak and Bashir'. Expect ridiculous dialogue, giggle-inducing hijinks, and Garak to make it all right again after Julian's made it all wrong.)

Written by tinsnip. Illustrated by Lady Yate-Xel. (For more of Lady's art in this 'verse, may I suggest perusal of the tumblr tags ds1920s and what ho garak, among others?

(tinsnip wishes to state publicly that this is Lady's fault, as Lady got her started reading Wodehouse, and now she is ruined for proper company.) 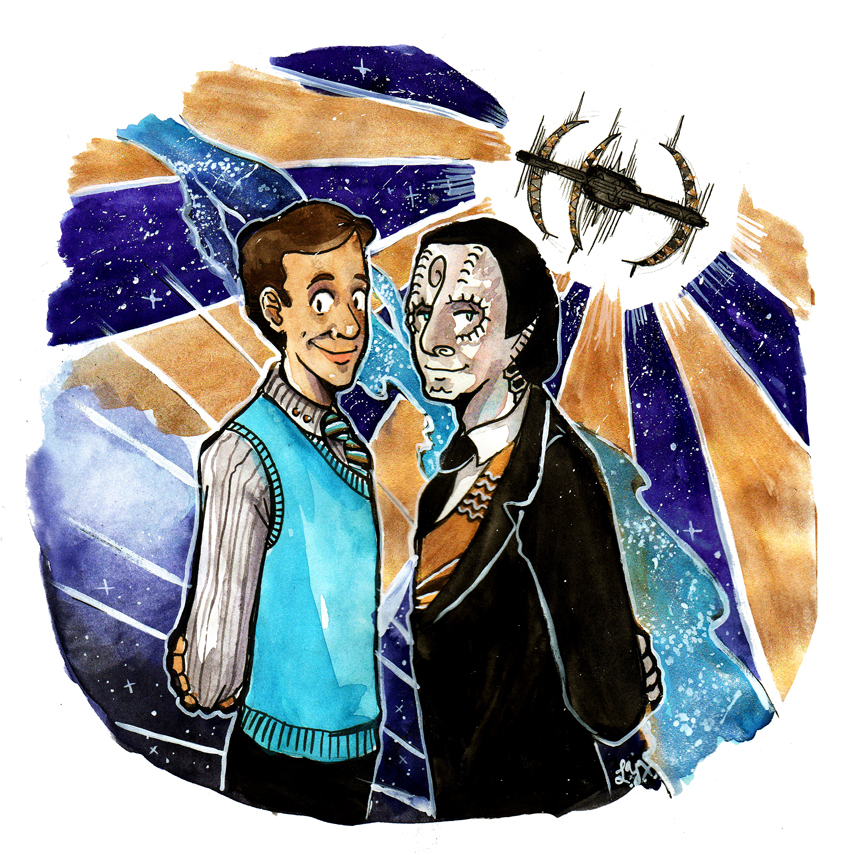 When she shimmered her way into the infirmary that morning, I smelled trouble.

Well, not literally, of course. I don't think trouble usually has a smell qua smell, if that's the term I mean. I've certainly been in enough of it to know its pong, and it's never ponged of much of anything. Unless, of course, you consider the time that a younger Julian attempted to make vegetable soup from various plants tugged from the front garden, mixed with a generous splashing of puddle-water, and then forgot the whole dashed mess under the bed for several weeks. If trouble did have a smell, it seems more than likely that's what it would whiff of.

But I distract myself from the point, which is that Jadzia Dax smelled most definitely of trouble, except she didn't. Still, I greeted her with cheer.

There was something not quite clement about her expression, and a warble in the tone that smacked of decidedly unpleasant things. She was, I felt, not up to her usual standard.

"What have you done to yourself this time?" I said, and shook the head in a fatherly manner. Now, you may fancy that my speech was a trifle harsh, but I assure you: it is no more than was required. Jadzia Dax is forever getting herself into scrapes. To set you the proper example, I will advise you that her idea of a giggler is to break into one's quarters and move all the furniture about, and when one protests, one is swatted upon the arm and advised to buck up, even if one's general behaviour is as giddy as can be. She is the kind of person that thinks life is something of an enormous joke, and I suppose she should know, considering she's had seven of them. Or is it eight? I can never remember. At any rate, she is an old thing with a positive pash for being a young thing, and it does tend to get her into trouble. If I am very lucky, sometimes she involves me too.

Today, however, it seemed the trouble had already found her all on its own. She held out her arm, and I noted a nasty tear in the uniform, along with a wound underneath that rather brimmed with the red stuff.

"Of course. Of course it was." I furrowed the solemn brow. "You know, you could get badly injured playing about in the holosuites with the safety off—"

"I wasn't in the holosuites."

Well, now the time for correction truly seemed to be at hand. "Jadzia, what on earth possessed you to play racquetball with a bat'leth? Dashed dangerous, I should think! Didn't one of your previous hosts have some little inkling that it might cause a bit of havoc?"

"I wasn't playing racquetball. I was sparring."

All the time as we talked, I was, of course, plying my trade. I'd seized up a hypospray of something goodish and pressed it to her neck the second I'd seen that wound, and her pupils were expanding nicely. Now it was but a moment's work to snatch up the medical tricorder and run it over the wound. What I saw on its screen made me thoughtful.

"It's deep. Must have been a most palpable hit, what?"

"Well, up on the biobed, then; we'll have you fixed up in a jiffy."

She made moan, but Jadzia Dax is a tough old thing: in a moment's time she'd hoisted herself up without the need for Julian's strong arm. My tissue regenerator was close at hand, and I ran it back and forth across the wound right slippily.

"Why were you sparring in the racquetball court?"

"Because Odo doesn't allow weapons on the Promenade."

She saw that my patience was short.

"All right, all right. Vilix'pran and I wanted to get in some real practice, not even the basic safeties enabled, and the holodeck won't let you turn them all off—"

"Hold on a moment." Something was tickling at the old eidetic memory, and I drooped the eyelids for a moment to let it winkle itself out. "Vilix'pran? Isn't that the fellow with all the antennae? The one we threw the baby shower for some years back?"

"What on earth is he doing messing about with bat'leths? Far too dangerous for a family man! Hasn't he got little ones at home?"

"Not anymore, he doesn't. They've fledged."

"Have they really!" Well, that put a smile on my face. "How time does pass! The battles of our youth become soon enough the old warrior's songs, if that's the thing I mean." And I fancy she was quite impressed with my summation, for her own visage was suddenly wreathed with grins.

"You do know how to put things, Julian."

I inclined the bonce with modesty as I poked at her mended limb. I was tolerably pleased with how it didn't spout ichor. "You're patched."

Her shout of delight gave me all the thanks I could want. A physician such as myself must not stand on thank you and never-ending gratitude and such base things. The members of the medical class are, I feel, above these meaningless platitudes. Our true reward is in the brightened eye, the springing step, the tinkling laughter of the recovered patient once again living life to the juiciest, as indeed Dax seemed prepared to do. The happy chuckle she emitted made me want to leap for cover.

"Thanks! Now I can get back to the court—"

"Hold up, old thing—back to the court?"

"Of course! I left Vilix'pran waiting!"

Well, really. Not getting any thanks is one thing, but to have the individual in question immediately pop off and once again unravel the bit I've spent so much time re-ravelling, if that's the word I mean? Smacks of ingratitude, I feel. I drew myself up to my full height and frowned the paternal frown.

"If you could manage not to injure yourself this time?"

Once again, I draw to your attention the rumminess of this Dax. The female of the sp. is deadlier than the m., and this appears to go for every species that dabbles in the gender binary and quite a few that don't. The clever gentleman simply steps aside and lets the thing pass, as, indeed, did I.

"At the staff meeting. Don't forget this time!"

This was hardly fair, given that my missing of the previous staff meeting had been entirely beyond my control. When a man is embroiled in the vicissitudes of battling nation-states, well, he may forget himself a trifle, running perhaps over deadline very slightly—and then should he find the holosuite doors jammed when he's just upon the point of leaving, and then should he be subjected to a barrage of acerb comments about the dashed inconvenience of it all as he's being freed by the fellow who is supposed to be his pal—well, suffice it to say that the previous day had been a bit of a confounded mess, and I felt well shut of it. Still, there seemed the need to raise the token protest.

"I didn't forget, as you know very well—"

"Details, Julian. Just be there this time, all right? We're only having two in a row because of you."

The soul bridled a bit at this, but there was no use in dwelling. I extended the hand of friendship. "I'll see you there."

"Okay!" She slipped herself down from the table with a pleasant little wriggle—moderately ornamental, that Dax—and squeezed Julian's grabber in a tight squeeze. She grinned at me, and I at her, and the entire interaction, I felt, was wrapped in the very finest feeling to which friendship could aspire. I was rather bucked up by the whole thing.

As Dax left, I turned back to my work, thinking not at all about the meeting to come. I am one who focusses on the moment. The future, to me, is something not to be considered beyond the necessary. Such thinking only produces acid reflux and a general sensation of malaise.

Dax had popped her head back 'round the infirmary door, a troubling look on her face. Note the choice of words: troubling, not troubled. Garak has gone to great lengths to impress upon me the importance of choice of words when one wants to get a certain thing across, and I am, I feel, beginning to wield such things rather deftly. And when I say troubling, well, I mean it: that look gave me trouble.

"Yes? Is there something else?"

"Nothing to worry about."

And with that she was gone, and Julian was left to brood upon the vagaries of life. Brooding is not, as a rule, a habit to which I am inclined. Close proximity to a Dax, however, does tend to give one reason for an excess of broodery. And so I brooded, and I brooded with a will, and as you will see, my brooding was not wasted, for the uses to which my colleagues planned to put me were worthy of brooding of the very highest calibre.