5 times Goku or Vegeta played a joke on others, and one time they played themselves. KakaVege.

“Help us! Please!” the alien said, clasping his hands together in front of him and glancing fearfully over his shoulder. “ There’s a Saiyan over there who’s going to eat us for breakfast! ”

“Did he say that?” Goku looked over the alien’s head, off in the direction he sensed Vegeta’s energy.

“It’s a Saiyan,” the alien repeated.  “Saiyans eat people, and then sell your planet to the highest bidder! Their stomachs are bigger than their brains! They went extinct because they ran out of food and ate each other! This one must have eaten the rest!”

“Look, the planet part might be true,” Goku said, “but I’m pretty sure Saiyans didn’t eat their victims.”

“Please, sir,” the alien said. “Please help us. None of my people are strong enough to stand up to such a gluttonous monkey.”

Goku groaned. “Do you have to be racist about it?”

“Saiyans are planet-killers without honor,” the alien said. “I can tell you are a fighter of integrity. Please, do not waste energy-”

“I’m going to stop you right there,” Goku said, straightening up and crossing his arms over his chest, pasting his best arrogant scowl on his face. “Picture me in the Saiyan armor and with a tail.”

The alien looked, confused, and then - slowly horrified.

The alien ran away screaming.

Goku snorted. There was a 50/50 chance Vegeta had actually made a threat about eating them. Not that he’d ever do it, but - it was meal time.

“Trunks,” Goku said, kneeling down to look him in the eye. “Your dad thinks I’m the dumbest person in the universe.”

“You cannot blow this for me,” Goku said, snapping his fingers in front of Trunks’ face. “Trunks. Look at me. I’m serious. You cannot tell him that I know what electricity is."

"Everyone knows what electricity is," Trunks said, perplexed.

"Every time there's a thunderstorm, I tell Vegeta that the clouds are shooting ki-blasts at us. When his phone is out of battery, I say let me try and then I get to blow it up! It’s the best thing ever!"

Trunks was too afraid to prank Vegeta, so neither of them had ever seen Vegeta's face after a good prank. "It's hilarious," Goku defended.

"Vegeta is going to kill me when he snaps out of this," Gohan mumbled. "Did you manage to hide the rest of it from them?"

"No," Videl answered, crossing her arms and glowering over at the offensive party in question. "I'm pretty sure they already drank it. Guess this really answers why you don't drink, huh?"

Gohan glanced back over at the picnic table in their backyard. It had long since been abandoned by everyone except Goku and Vegeta, who had the remains of several 6-packs scattered around them in a mess. "Dad never drank alcohol, that I can remember," he mumbled. "I assumed he knew. And Vegeta must have known."

"I don't know, he and Dad just show up at places together." Gohan ran a hand through his hair. "Some summer barbecue. Do you think everyone's figured out they're aliens yet?"

Videl just raised her eyebrows and jerked her hair over in the Saiyans' direction.

"Clovarians don't have limbs, Kakarot," Vegeta was saying, at approximately 15 decibels louder than he needed to. "And Spivogs and Spovigs are from different planets, but both planets are named Spise. Got it? So a Clovarian, and Spivog and a Spovig walk into a bar-"

"Wait, wait," Goku interrupted. He was also borderline shouting. "You had walk-into-a-bar jokes in space but you didn't have knock-knock jokes?!"

Vegeta slammed his hands on the table and glared at the other saiyan, as if trying to pulverise him by proxy. It didn’t work, but some forks and spoons on the other end flew into the air. "For the last time, what is so special about your stupid door jokes?"

"Who's there," Goku finished for him, nodding.

"Kakarot, this is so stupid. I don't know who is there."

"Noooo," Goku whined. "That's not it. And -wait, didn't the Clovarians not have limbs? How can they even knock?"

"They roll around, idiot," Vegeta said. "They're spherical. And I told you I didn't know it, whatever your terrible joke was going to be."

"Shut up, it's my turn. A Clovarian, and Spivog and a Spovig walk into a bar-"

Back at the edge of the lawn, Gohan sighed and pinched the bridge of nose. "Yeah. They're definitely aliens."

"Don't worry so much," Videl said. "They could be clinically insane."

He turned around. "Mom! Thank goodness you're here."

Chi-Chi stepped forward and straightened the collar of Gohan's polo shirt. "Of course, I came right away. So what was that problem you needed help with?"

"Goku and Vegeta are drunk," Videl said, pointing to their picnic table. Vegeta was now standing on top and imitating gun fire. "They took all the beers and got drunk in about 5 seconds flat."

"I can't believe they did this," Gohan said. "It's 3 in the afternoon. Have they never drank before? They know Saiyans have fast metabolisms, the alcohol just went straight to their heads."

"I can't speak for Vegeta," Chi-Chi said. "He is serious about his training. But this same thing definitely happened to Goku at our wedding."

"AND THE BARTENDER SAYS," Vegeta shouted, leaning down directly into Goku's face. "THAT'S ONE SPISE-Y MEATBALL!!!"

Goku shouted something back, but it couldn't be made out over Vegeta's cackling laughter. Goku pushed him so hard that he fell off the table, but Vegeta kept laughing on the ground.

Chichi sighed patiently. "I'll deal with this," she said, rolling up her sleeves and marching in.

Goku whipped his head around, instantly interested. "Really? What?"

"It involves the house's ki," Vegeta said, slowly taking out a metal fork from behind his back. "If you stick this in one of the wall outlets, you're able to harness some of its power."

Goku stared at the fork, and then at Vegeta for a long time.

CRASH! came loudly from the other room, followed by a soft "Oh, crap."

"TRUNKS YOU SNITCH!" Goku shouted, taking off in the direction of the noise.

He only made it a few feet before he was tackled to the ground. "You're going to stick this fork in the goddamn socket, Kakarot! And it better kill you or else I'm going to finish the job myself!"

Goku jabbed his elbow into the side of Vegeta's face and wrestled himself free. "What do you mean, socket?" he said, leaning backwards and cocking his head to the side. "Socking something is to punch it, right? So am I supposed to stick the fork something punching me? It seems like a weird training technique, but if that's what you do-"

"No, you idiot!" Vegeta interrupted. "I don't-" he cut himself off suddenly, and narrowed his eyes. "Oh my god, you just did it again."

Crap. "Did what?" Goku asked, using his best no-idea-what's-going-on voice. "I don't know what you're talking about."

"You're fucking with me, Kakarot! You blew up god knows how many of my goddamn phones, and the gravity room that time- oh, you fucking know what soap is too, you bastard! You've been making me wipe down the exercise equipment all myself for nothing?! You're DEAD!!!"

Darn it, there went Goku's favorite afternoon activity. He sent a blast of ki Vegeta's way and made another attempt for the door. "Trunks-"

It is a commonly acknowledged fact that while Goku and Vegeta can be extremely chaotic forces when pitted against each other, they are completely, utterly destructive when they work together.

This is not only true on the battlefield, unfortunately.

Goku looked sheepish. The look was very out of character for him, thus Bulma’s apprehensiveness increased sevenfold. Saiyanfold. Whatever. “Ehehe. We’ve got good news and bad news, Bulma - which one do you want to hear first?”

Bulma groaned, knowing full well where this was going, knowing it was the last thing she needed after a day from hell in the labs. “Hit me with the bad news first,” she ordered.

Goku looked a little nervous. “The bad news is, well… we… uh...may-have- huntedforsomeonearoundthewholehouseanddemolishedsomefurnitureIthoughthewashidingunderbutitturnsouthesnotevenhometoday.”

The words are uttered extremely quickly, an unfair utilisation and misuse of enhanced saiyan speed, in Bulma’s seething opinion. Goku rushed on. “The good news is that you get to redecorate the entirety of your left wing!”

“And that we are unlikely to ever ever do it again,” Vegeta added, without even a flicker of remorse, though his eyes are twitching.

Bulma looked between the two of them, as she prayed to God for patience. Then she realised she didn't believe in Man in the sky, except for the Kami she knew to be a green alien boy from space, and thus she wasn’t bound by any rules to have patience.

She took a deep breath. Both full-blooded saiyans exchanged a fearful glance.

By the end of the day, it emerged that both the east and west wing of Capsule Corp would need renovation that month. Goku and Vegeta ended up learning a valuable lesson in the art of self-preservation, a milestone considering they lacked any to begin with.

Whether they would remember it for the future is entirely up for debate.

Goku shared a smirk with Vegeta. He knew this, right here, would be the best prank they ever pulled. Forget Super Saiyan, this was the legend they would be known for, long after everything and everyone had turned to stardust and ash.

“Vegeta and I have something to tell you,” Goku said to Krillin and 18, grinning.

“Yeah?” Krillin looked distinctly nervous, while 18 raised a cool eyebrow. “You didn’t get drunk and cause another international police incident again, did you? I’m still recovering from the last time I had to deal with that.”

“No, that’s scheduled for next week,” Vegeta answered nonchalantly, in that particular tone that no one could tell if he was serious or not. Goku nodded enthusiastically, grin widening. Eighteen looked mildly interested. Krillin was ready to run.

“Nah, what we want to tell you is, Vegeta and I, we’re,” Goku paused for dramatic effect, “ together .”

Krillin and 18 both looked blank. “Okay.”

Huh. “As in, romantically together,” Goku tried again. “Intimately.”

Vegeta’s brow furrowed. “Why aren’t you shocked?” the prince demanded.

Krillin looked between the two of them, realized that this was exactly what denial looked like in human-er, saiyan form, and quickly backtracked.  “ Okay, ” the monk repeated, modifying his tone and inflection to be more appropriately surprised.

Of course, predictably, 18 didn’t bother with their bullshit. “Is that supposed to be news?” the android asked, amid the slowly dawning horror on both the saiyan’s faces.  “We’ve watched you two make heart eyes at each other for years .”

Oh well. Krillin loved his amazing girl in any and every way, but especially like this, when she’s smirking wickedly, ready to destroy the foundations of their lives.

Well, as they say here on Earth, you never monkey with the truth. Apparently, the saiyans didn’t get the memo. 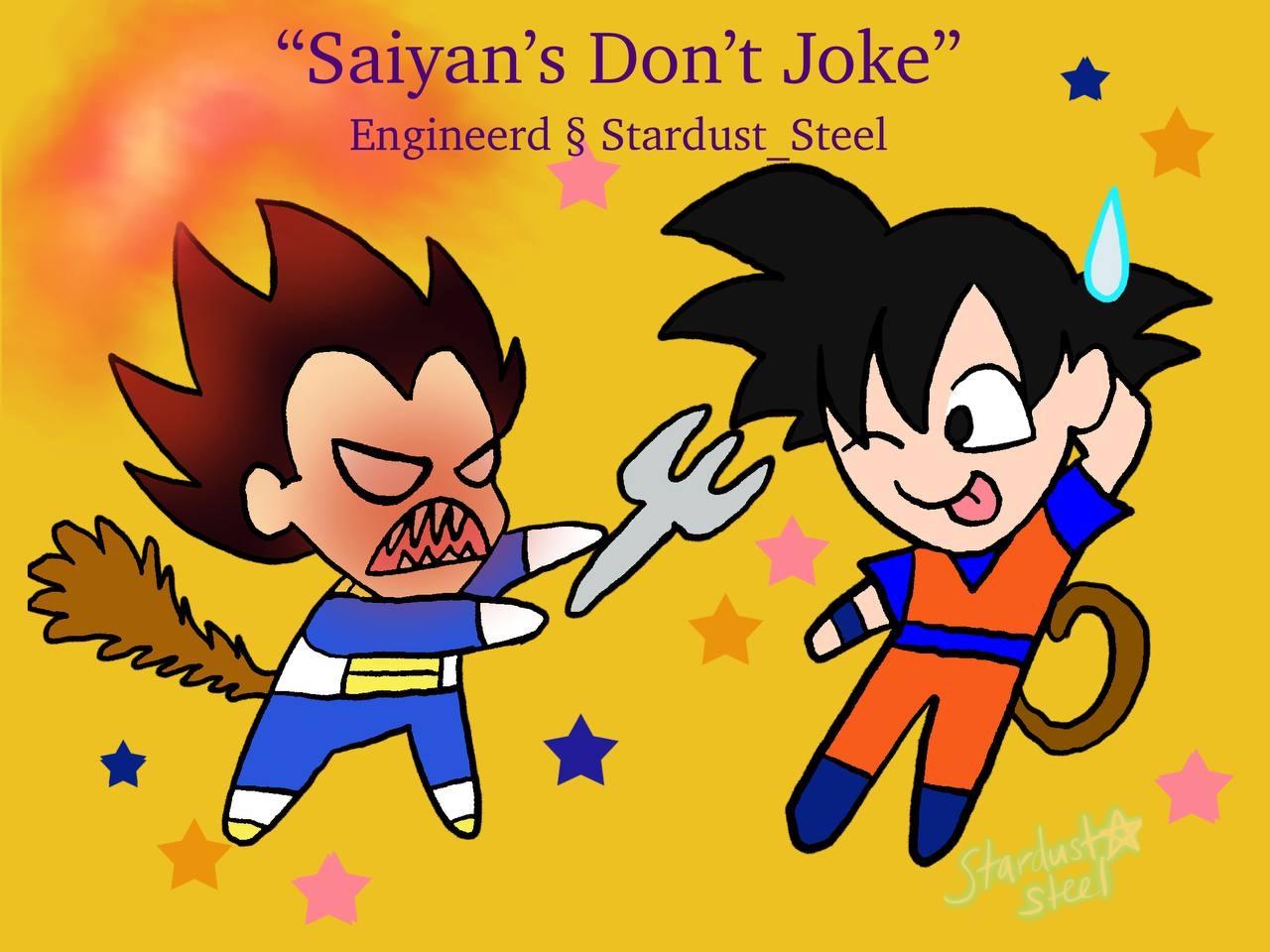 Thank you for reading! This was honestly a treat to write and collab on, I hope you enjoyed this little oneshot as much as we did =)