A chilly breeze blew on Asterion's face, forcing his eyes open. He was somewhere he didn't recognize. Only distant rivers bound the horizon of open fields. In the centuries the minotaur spent in the labyrinth, he might as well have forgotten such limitless airiness; save for the terrible valley.

This, however, was not the valley; no, these grasslands weren't barren and oppressive. One could only describe the place in oxymoronic ways; ashen lushness, brightly dim, dead and full of life. Skyless land of damp soil, forever cast in the smell of rain. He hadn't spent too much time there, but could tell his location: this was Asphodel. 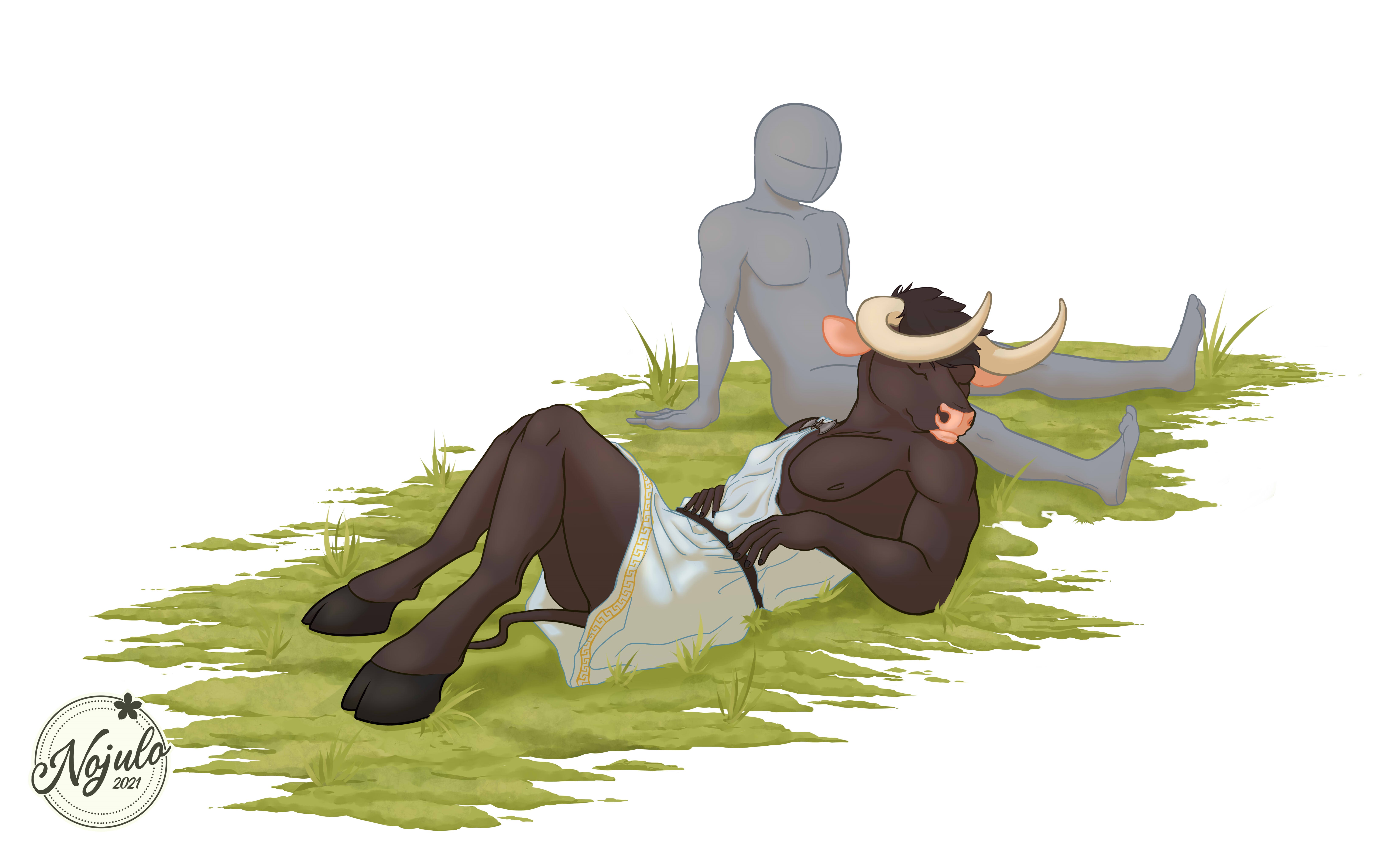 His apparent return bothered him none, the immediate surroundings engrossed him more. Asterion's body lay on the top of a hill, underneath the shade of a tree. A foreign constitution supported his head, soft and warm; he slept on someone's lap.

He heard a voice from above, but he also didn't; true to the nature of this place, it sounded silent and blaring. Words just formed in his head, instead of coming out of a mouth. The presence emanated no ill intention, however he couldn't figure out the speaker's identity.

Both beings returned to silence. The unknown person laid their hand on Asterion's neck and caressed it as Asterion looked towards the meadows. The touch felt human; they petted him with tenderness, a familiar sensation.

Though the minotaur never grew wary, he felt the touch relax him further. A harmless, intimate individual sat above him. The whole situation relaxed him so much, he let out a soft sigh.

"Forgive me. How unsightly."

A sudden frigidness sapped his calm. The word "adorable" brewed a storm in his mind. Few had said such words about him, fewer still had esteemed his bestial tendencies. Any time he tried to match the word to a face, however, his mind went blank.

Those words caused a feeling of formication under his skin. The petting went from caring touch to brute raking. The tempest of anxieties worsened, the shivers flowing from his core to his fingertips and hooves.

The scenery changed. The wind blew stronger, the twigs where white flowers grew bent to match the gust. Cinder took over the green, darkness overpowered the light, and the stench of death snuffed the beam of life.

"You should be here," the voice said.

His strength dimmed to the point of paralysis. The warmth of the body he laid his head turned into hollow frost. The strokes grew violent, to the point of ripping fur and harming skin, revealing past wounds. He could repeat many times how well he could endure pain; those lies would do little here.

As they said that, sludge fell on his cheek. He failed to stop the ooze from invading his muzzle. It tasted of iron and fire, blackness and pain, the memory of myriad punishments; cursed blood.

His body fought the paralysis; the struggle only awarded him with the ability to move his head. Facing the entity above him, more black mire fell on him.

One could not call what he saw a face. In the place of eyes, nose and mouth were holes; looking into them, he could only see the abyss. Any remaining facial features were corpse like, dry and rough. From each of the profane orifices, more oil poured out. The thing wailed and cried.

The ooze gradually covered his face. He would scream if he could. Instead, he lay feeling the awful substance with fear etched on his face. Grime blinded him before it filled his mouth. His nostrils flooded, he couldn't breathe and then-

Asterion's eyes jerked open. The feeling of cold sweat underneath his fur unbearably bothering him. The hotel's master's room replaced the extensive fields, a large bed instead of the damp grass, and those deathly knees became the sleeping kind master's lap.

The minotaur raised his head with care so he wouldn't wake his business partner. He wiped a wet spot on his cheek clean. The heinous goop from his dreams, just some drool the kind man dribbled in his slumber.

The day's events flashed through Asterion's mind. The new guests and staff members were a handful, but that day would be the one where they would put it all in order. Once they did, Asterion had requested a celebratory hug; the master of course obliged. After a long, comfortable embrace, the bull had accidentally blurted out his feelings when he placed an earnest kiss on the man.

In secrecy, those strange feelings had been growing inside the minotaur for some time. Hummingbirds on his neck had grown to ferocious eagles and an inextinguishable flame took hold of his chest. In his time, such an act had other implications, but his observance of guests over the centuries had shown him its more modern meanings. With a kiss like the one he gave, those forbidden, hideous emotions were a secret no longer.

True to his nature, the master suggested they address it in Asterion's time, but the minotaur thought it best to resolve things that very night. When the time to sort it out came, however, his bovine mouth remained wordless. His frame just shivered as eagles ate the back of his neck.

He had once told the kind man of how, in his youth, Asterion would lie on Androgeus or Ariadne for recreation; the master suggested then they do that so the minotaur would relax. Clearly, however, they had relaxed too much.

"Asterion?" said the master in a sleepy voice. "What happened?"

"We fell asleep, it seems."

"I... agree." Asterion could not hold back his blushing.

Off the bed, the minotaur eased the man from sitting to resting position.

"I don't think we are in a proper state for that, alas."

The man would reply had he not passed out already. Asterion snuck out of the room.

Once in his own room, the minotaur sat on the bed. The hotel's problems, the kiss, the dream; all weighted heavily on his mind. He thought sleep would not visit him again that night. That brief reprieve would prove him wrong. Before he realized, his body rested on his bed, thinking of his business partner's actions and words. This time, such thoughts brought not an unquenchable inferno, but an easing hearth.

He slept unimpeded the rest of that night.