In the aftermath of the fallout of the La Grenouille op which Tony learned was an unsanctioned op, he is numb with the betrayal of his Director, and grieving the loss of a woman that he had loved. He is unable to continue working for the Director whose thirst for revenge had loosed all of this. Tony decides that he needs to leave.

The story takes place after s05e01 Bury Your Dead, and I've marked it as canon divergent because well, it diverges from canon at that point.

This is the first of my two Every Fandom Reverse Bang stories for this year! This story is inspired by the gorgeous artwork made by SpencnerTibbsLuvr. I hope you enjoy it! 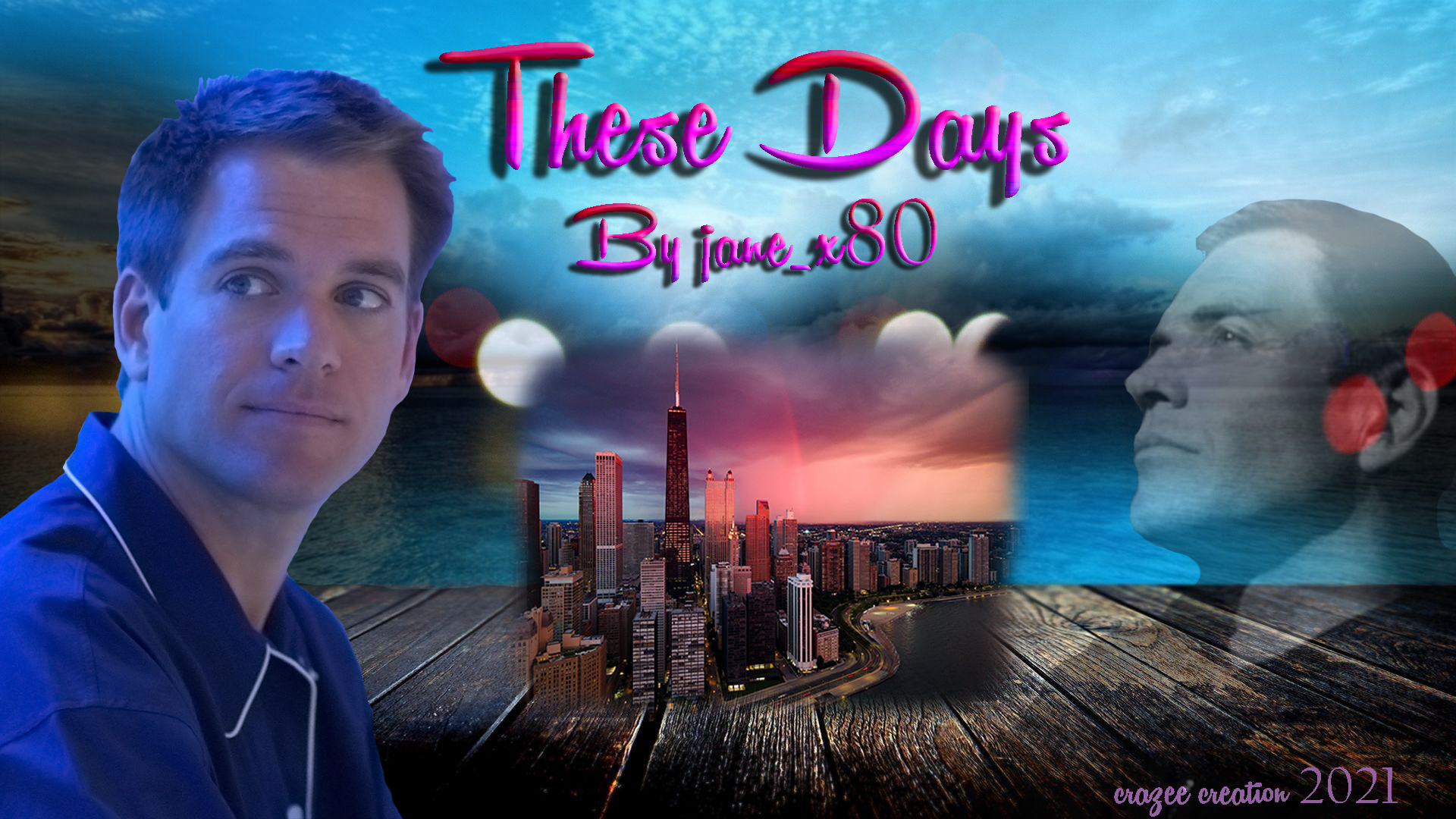 For two weeks after Tony’s car and his life blew up, after Jeanne left him for good, Tony stayed silent. He declined any time off to recover from the ordeal and just went back to work as if nothing had happened. He ignored the whispers around the Navy Yard, pretended not to hear the talk that went on behind his back, hell, in front of him, too. He turned a blind eye to the looks of pity and sympathy that some gave him, ignored the cruel barbs others threw at him to his face, refused to acknowledge that he was anything but fine, even though he was taking the bus to work because his car had been blown to smithereens, and it was dumb luck that he had been spared.

He refused to think about the fact that part of him wished that he had been in the car when it exploded. Not that he was in any way suicidal. It just sometimes felt like the easier option. Then at least he would be spared whatever the hell this was that he was experiencing. He was just existing. Going through the motions. Going to work, doing the work, allowing what seemed to be a rotation of Gibbs, Ducky, Palmer and Abby to take him to dinner before sending him back to his lonely apartment. His real one, that is. The one that Jeanne had never even known about, never mind been to, so technically nothing there should remind him of her. But it felt cavernous in its emptiness. What was supposed to be his haven now just felt empty, just as empty as he was.

He hadn’t gone back to Tony DiNardo’s place. Hadn’t wanted to retrieve anything from it. Didn’t want to be confronted with his failures. Didn’t need any reminders of how happy he had actually been for that short time, despite the fact that he had known that it couldn’t possibly last.

And for those two weeks, it was easy to just coast through life, ignoring the hell out of everything but the work. It was as if he was just going through life as a sleepwalker and nothing could touch him. Nothing could hurt him. Even if the words that Jeanne had wrote in the Dear John letter she had left for him at her apartment continued to reverberate and echo through his brain, he felt insulated from it somehow.

Until the day that Director Shepard – Jenny, as she had asked him to call her multiple times now – tried to talk to him in private. Just to ‘check in’ with him.

And then everything came screaming back into focus and all Tony felt was hurt. Hurt that this woman, this woman that he had trusted because she had been one of Gibbs’ and surely someone who had been Gibbs’ protégé, much like Tony had been a few years ago, surely they could be trusted not to intentionally fuck things up. But no. Fucking chick had roped him into an unsanctioned op in some perverse attempt at a vendetta against an arms dealer that she blamed for her father’s death. Which, by the way, had been ruled a suicide. And as far as Tony could tell, no matter what Director Shepard claimed, Rene Benoit had not murdered Jasper Shepard. Hell, from the chatter Tony overheard, Jasper Shepard had taken his own life, unable to live with the fact that he had taken a bribe.

Sure, Tony was sympathetic. No child wanted to face the fact that their parent was not just imperfect but fallible, but that was no reason to fucking ruin Tony’s life. He had met the woman of his dreams while pretending to be someone else, all the while he was tasked to get close to her to see if she was in any way involved in her father’s arms dealing pursuits, and if she was innocent, then she was a way in for Tony. He could use their relationship to get closer to her father.

Tony should have known better than to trust anyone at all. But his time here in DC, surrounded by people who had proven themselves to be trustworthy time and again, who hadn’t disappointed him over and over again like his own father had, or Danny, his old partner had, it had lulled him into thinking that those in Gibbs’ circle could be trusted. And it had been to his detriment.

All of a sudden, after two weeks of being numb, Director Shepard had been the one to make it all come crashing down. All Tony could think of was that he had met the woman he could envision spending the rest of his life with under false pretenses. He had used her. She had been such a good person, wanting to change the world, wanting to make a difference which was why she had gone into medicine and worked to help heal people. And he had cruelly taken advantage of her and used her. Even though he had fallen in love with her in the process, and she with him, the good doctor had fallen in love with Professor DiNardo and not Agent DiNozzo. She had fallen in love with a construct. Someone Tony had designed – sure, based on some of his own characteristics – but DiNardo had been carefully constructed and designed to appeal to Jeanne.

Tony had lied to her.

The Tony she had known was a complete lie.

But the feelings that Tony had for her? That hadn’t been a lie.

And all Tony could think when he looked at Director Shepard as she tried to make things right, without actually apologizing for how she’d taken advantage of him and ruined his chances at happiness with Jeanne were her words during their debrief.

You never really thought it could end any other way, did you?

You’re not supposed to fall in love with them.

Without a word, he turned and left while Director Shepard was mid-sentence, ignoring her when she called his name. He was done listening to her. There was no way he could obey another order from her. He took a moment to stop by his desk to pick up his gun and badge, mumbling to Gibbs, careful not to catch his eye, that he was taking the afternoon off and just getting the hell out of the building before anyone could get a word in.

He went home, drank enough Jack Daniels to risk alcohol poisoning and yet he still couldn’t stop Jeanne’s letter from echoing in his head all night.

After what happened with your car today, you asked me if I loved you. I do. I love you so much. Except now I don’t know whether the Tony I love is even real. I love Tony DiNardo. I have no idea who Anthony DiNozzo is other than the fact that he knows how to handle a gun, lied to me about who he was to make me fall in love with him, and was assigned to pretend to love me because my father is an arms dealer. Which I had not known, so thanks for that little nugget.

You are someone else. You are not who you said you were, and I can’t believe anything that you or my father have ever said to me. So how can I love you?

You said that not everything was a lie, but how would I know? How could I ever trust you again? How would I know if you’re who you said you were when our entire relationship was a lie? I have to ask myself how far you would have gone to entrap my father? Would you have moved in with me? Married me? Fathered my children? What would have been your limit? Fucking me and pretending to love me was fine. How far would you have taken this charade, Tony?

Everything was a lie.

You broke my heart, you broke my trust, and I will never forgive you for this.

Don’t look for me.

He was too drunk to drive so he took a taxi to work at the wee hours of the morning and he asked the taxi driver to wait while he went and left his letter of resignation on Director Shepard’s desk, doing the round trip back home in short order. He passed out on his bed soon after he got home. 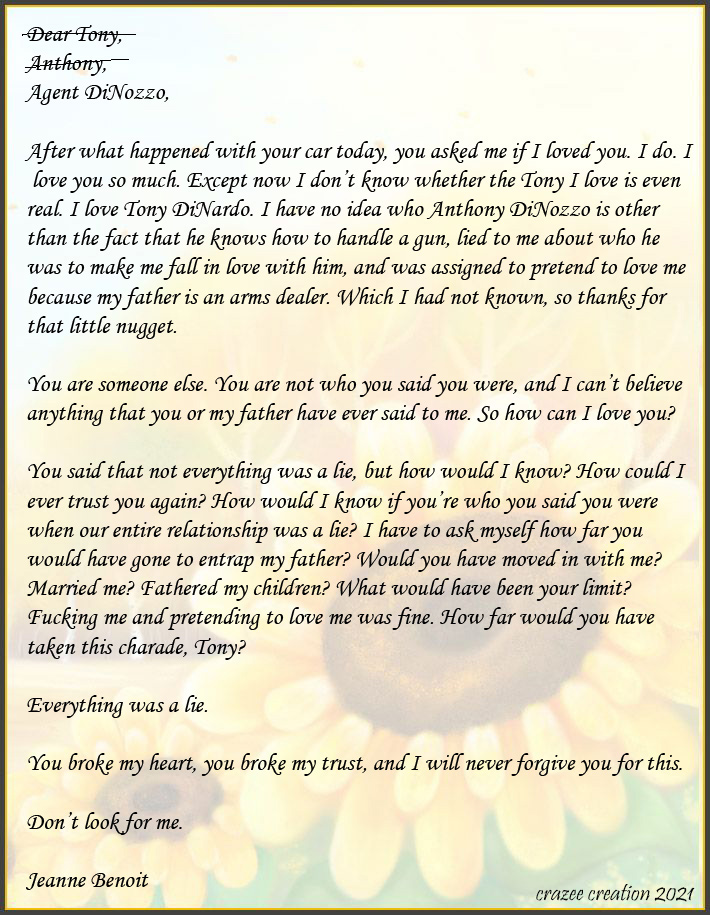