Want to know where your donations are going? Check out our latest budget update and donate today! We've raised US$255,407.43 towards our goal of US$50,000 so far!

Spike and Xander talk after the night at the vineyard... 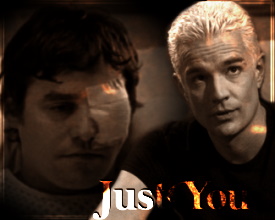 “Taking this Nick Fury thing a bit far if you ask me, love,” Spike said, closing the hospital door behind him. It hurt to see how hard Xander tried to smile and he strode across the room and took the seat next to the bed, grabbing Xander’s hand. “Not that you ain’t all kinds of dashing and all that – just never thought you were into the whole method acting thing.”

“Should have made the chits leave a bit sooner – they’ve tuckered you out,” Spike said, kicking himself for not realising it sooner.

“No – it’s fine. I think Willow needed to see that I’m still alive and kicking, and Buffy – “

“Oh yeah? And what did Buffy need?” Spike said, unable to keep the anger out of his voice.

“And well she should. We shouldn’t have gone in there with so little information – and that scythe thing – “

“It doesn’t matter now,” Xander said, looking down to where their hands were joined. “Look, Spike – if this makes a difference – if you decide you don’t want me any-more – “

“OI! Where’s this coming from?” Xander turned his face away, but not before Spike saw the tear that was sliding down the cheek on his uninjured side. Standing quickly, Spike pulled the resisting man into his arms. “What’s this about, love?”

“I was never much of a catch in the first place – I really couldn’t see why you would want anything to do with me! But now – this!” Xander cried out, burying his face into Spike’s shoulder. “I’m just – ruined! I can’t fight, I can barely see – what use am I to anyone now, Spike?”

“Oh Xander!” Pressing a kiss to the clammy forehead, Spike sat on the bed, making them both more comfortable. “You couldn’t fight before but I still fell in love with ya! And losing your eye – it’s a fucking awful injury, but it’s an honourable one, Xander. Look – I stuck by my Dark Princess for nearly one hundred years and she was battier than bag of frogs! Why the hell would I leave you just because of this?”

“You could do so much better than me, Spike!”

“Why would I even be looking? I’ve found the bloke for me – don’t need to be out there trawling for tail or anything else for that matter!” Spike sighed and tried to find the right words. “Look, Xander – I’ve always been like this, yeah? When I fall in love – and now you’re making me get all sappy and whatnot and I hate that! But, when I fall in love, then that’s it, you know? Would have stayed with Dru forever if she had loved me back. Why would I lose out on someone who loves me as much as I love them? I don’t need anyone else, love – just you. Exactly as you are.”

“You sure?” Xander sniffled.