Deep beneath Cowdenbeath there stands a wizard tower, long abandoned by it’s master. It stands silent now, dreaming of a friendship once grown and crumbled in within its walls. 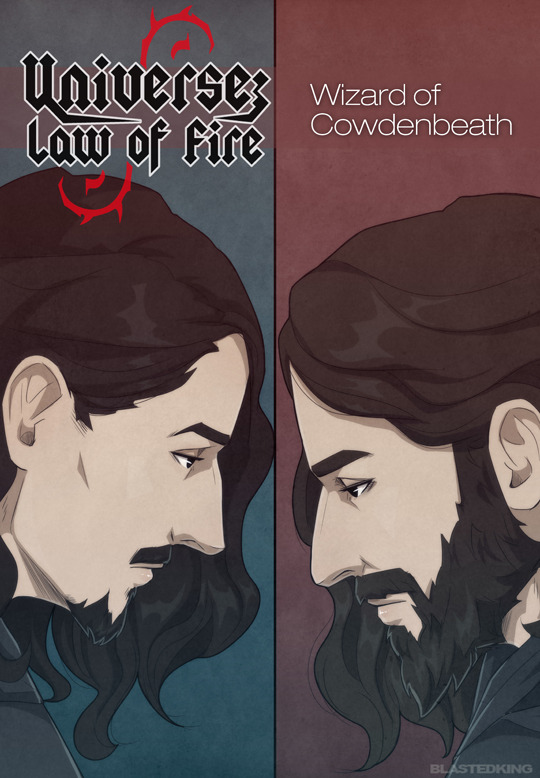 Mezchinhar was a magical place.

Mezchinhar was also a dreadful place.

With its unearthly light, stuck in the endless nothing, a strange place where no place should be. Unnatural in the context of any universe and yet build in its image. Once when time came into existence, there had been numerous of these places built, providing shelter for those created to walk time in a timeless space, the infinite nothing between universes. But many of these places and the universes they cared for were now lost to them - once forgotten, never able to be found again. Quite wondrous and mystical in that regard. The mere idea of the amount of universes and knowledge lost able to drive the most jaded scholars in Mezchinhar to their knees.

“-therefore, we will grant you the opportunity to once more pass on your knowledge-”

Build on the godly dream of great galactic order. A concept ingrained into them from creation. An idea really, that there could be order brought to the chaotic existence of universal life. A conquest that would first come to a halt when time itself stopped existing.

And there was Order.

Only one of them was natural but neither was good or evil.

“-find him most helpful, as he has proven himself exceptionally-”

There was no concept of good and evil native to Mezchinhar. There were no considerations of morals either. There couldn’t be morals without a concept of good and evil. At least that was how it used to be. As they had learned to walk time, learned the meaning of these words, Order and Chaos had been perverted to take meanings that never applied to them in their original form. Chaos was not inherently evil nor was order inherently good. Nor vice versa.

“-implore you to take this opportunity serious-”

Zargothrax blinked lazily, dragging his thoughts from his philosophical musing with a low sigh as his gaze focused back on the wizard speaking to him since an eternity. A wizard with a name Zargothrax didn’t bother to remember but probably should based on the fact they hadn’t been reintroduced. A wizard as bland as the rest of this place. Static, safe and boring. He was positive that his words were of great importance, at least the determined look on the wizard's face would suggest so, but he just spoke without saying anything of note.

Hence he had seen no reason to listen. But he had done so for long enough now.

“If you want to get someone to keep an eye on me, why don’t you just say so?” he asked with an utterly unimpressed look on his face and a flick of his hand that made the wizards of the committee fluster as he just cut them off mid sentence.

“Zargothrax, we assure you that this is not the reason, nor the purpose of this Scion. We know you prefer to keep to your own, we just want to give you a chance to connect with someone at your side again.”

“How kind of you. Thank you.” He smiled, the sarcasm was so badly hidden that his tone wouldn't pass as genuine thanks even if one tried to hear it that way. Of course, no matter what they said, the Circle wanted to have their eyes on him, and this was sure one way of getting that. And really, Zargothrax did not particularly care. He would take in this Scion, he would be decent to them because the young wizard probably had no idea what they were really used for, and he would stick up with it till he could send them on their merry way again and call it a successful education. No harm done, the peace kept.

And there people called him a contrarian.

“You will meet him outside, he is already waiting for you.” They ignored the sarcasm if they even bothered to acknowledge it in the first place. Zargothrax nodded. All as expected.

A couple of decades, maybe a hundred years, to get back to form a young mind didn’t sound too bad. It might make for a welcome change. A chance to do it right this time, too.

These wizards may talk a lot of empty air but in one regard they had been right - he had kept to his own for a very long time now. Truly alone and suffering for it, by his own choice no less. It was the reason he actually had even considered this request seriously. He wasn’t as jaded to doubt some company to talk freely with might do him some good. Especially of the kind that, maybe, wasn’t yet fully indoctrinated by ohh-great-galactic-order. They wouldn’t be able to fill the void the loss of his Warrior had left, but it would be at least something. Someone.

Some not very heartfelt goodbyes were exchanged before Zargothrax left the committee room and even if the wizard wouldn’t have been the only one standing and waiting in the empty hallway, he would have stood out like a sore thumb as exactly the young wizard he was. A young wizard who had probably never in his life, may it been already several hundred or thousand years long, set foot outside of Mezchinhar.

His wishfull optimism faltered a bit as he saw how stoically stiff the young wizard stood before him, greeting him. He literally stood to attention, and Zargothrax could have sworn he had almost saluted him. It would have been amusing if only it wouldn’t remind him of his Warrior.

“Grand Wizard Zargothrax. My name is Ralathor. It’s an honour to be assigned your student.”

He mustered the young wizard named Ralathor from head to toe. The stark lack of style was expected, the black robe nothing but functional, the blue cloak volumeless and sad hanging down from the tall and thin frame. Mezchinhar had its way to wither away any sense of the dramatic before it could even take root.

A stoic gaze in the black eyes and not a shred of nervousness, the posture ridiculously straight and propper, downright militarily. The tone of voice; calm and respectful. At least he seemed already well adjusted to walking in his probably first additional part. That was… if it was his first.

Zargothrax frowned lightly. “Did we meet before?” he asked as he couldn’t shake the feeling that he had seen the face somewhere already. He was downright sure of it. Only briefly, but somewhere.

“No, Sire. Not that I’m aware of,” Ralathor said almost solemnly and Zargothrax understood why when he added, “Though before I became who I am now, I had been a Soldier at Kilchoan. As I've read, you had been the commanding officer at the battle.”

Kilchoan, of all places, but at least it explained his own faulty memory. Many wizards had lost a part of their life in that battle - he had been one of them. The ridiculous irony not lost on him that they both might have met and interacted before, but neither could remember it.

“Indeed,” Zargothrax answered, quite able to relate to the sense of discomfort of considering an existence that preceded one’s self and not having any recollection of it. He saw it clearly in Ralathor's face. Knowing that at one point, he had been considered not more than a tool, an effective drone, but with no given agency.

Well, either way, this wasn’t the time to consider the soldiers fighting their wars nor ponder over past battles. Whether or not they had met before was of no relevance either, because Ralathor wasn’t who he had been back then. Back then he would have been nobody. Now he was his student and that was all there was to it.

And they had a lot of work to do if he ever was to get this ridiculous stiffness out of the young wizard. Zargothrax sighed and almost felt sorry for the puzzled look of worry in Ralathor's face.

“Is there a problem, Sire?”

“No. Follow me, and listen. A few rules here to make this work. Are you listening?”

“Of course, Sire.” Ralathor quickly walked after him.

“First of all, drop the Sire or I’ll flay you alive. You’ll get only one warning!”

They were in full stride when Zargothrax effortlessly opened the portal before them and they promptly passed through it.

“Secondly, think before you speak, and if you do, speak true or be quiet.”

They arrived in the wizard tower momentarily. The staggeringly stark difference to Mezchinahrs cold, distant design was the first thing that took the young wizard by surprise. His first look of earth, and he almost stumbled as his eyes darted around the hall they just entered, fully taken by its rustic charm weaved seamlessly with the magical architecture of the wizards of yore. The light warm and inviting, wood, metal, stone, gold and splendor catching the light of fixtures and panels, their steps softened by a dark magnificently woven carpet that spread the entire hall. When Zargothrax spoke again his voice no longer echoed from the bare walls of Mezchinar, but lost itself in heavy drapery and between pillars reaching three stories tall.

“Welcome to Cowdenbeath. Are you still listening?”

“Yes! Of course. Speak true or be quiet,” Ralathor quickly repeated, catching back up to him. “Cowdenbeath? We’re not in Auchtermuchty?”

“I had to move. As an addendum to point two, be sure to speak your mind. I’m your teacher now by title, but I’m not your master, I’m not your lord, you're not my servant. If you can't voice your own opinions, I have no use of you and you can turn around right now.”

“That is not important now.” Zargothrax stopped in his tracks, turning around, Ralathor almost walked straight into him. And at that moment Zargothrax saw that this student of his was not shaken by the tone nor words directed at him, on the contrary, he seemed almost satisfied. Maybe this could really work. Maybe he wasn’t as bland as his first impression had led him on to believe.

“Alright. Is there a point three?”

“Yes.” Zargothrax squinted downright suspiciously at him. “Thirdly: What is your opinion on Unicorns?”

Zargothrax raised his finger before the young wizard's face.

“That was it, your first and only warning.”

Finally, this one!
Been sitting on this since over half a year - but it did it some good, it grew quite a bit in that time. Unfortunately Ligeia wasn’t available for beta and edit this time around, so you’ll have to deal with a couple more mistakes than usual a less of the flowery language. x)
With this one we jump quite a bit in the past, exploring one part of Zargothrax and Ralathor's backstory. As we are all aware, they don't really see eye to eye in current time, so do not expect a happy end here. Things will turn quite tragic, ending in a rather somber end all together.
But for the first few chapters the world is still fine.
These are 18 actual Chapters - the last three after 18 are Epilogue chapters that I probably all post within a week once we reach them.
I really like this one and I hope you'll enjoy it as much as I do! ❤️
New Chapter as always every Saturday 7 pm CEST/CET!