In Which Pooh and His Friends Celebrate Christmas

This is the sequel to In Which Pooh Hunts for the Meaning of Christmas.

Christmas had come to the Hundred Acre Wood.  Or so Christopher Robin said, and he should know.  He came down to Pooh’s home and knocked on the door; and, although he was a bit too big to be able to come inside, it was quite big enough outside for Pooh to go and see him there.  Christopher Robin looked like his real self, just as he’d done before he went away.  He wore his boots, for there was a little snow on the ground; and he wore his coat and hat because there was a nasty cold wind.  In his hand was a big brown paper bag.

“What do we do for Christmas?” Pooh asked.

“We sing carols,” said Christopher Robin firmly.  He sang Silent Night to Pooh, getting only a few of the words wrong.  “And now we go around to other people’s homes and sing it to them,” he explained.

So they did that for a while, collecting Piglet and Eeyore and Kanga and Roo and Tigger, one by one, until finally they’d gone round to each other’s houses several times and were feeling rather footsore.

“Now, we eat mince pies,” Christopher Robin declared.  He opened his brown paper bag and took one out.  It didn’t look big enough for everyone; but, after he’d politely handed it to Kanga (for “Ladies First”, you know), he reached in again and pulled out another.  This he handed to Roo, who was bouncing up and down almost as much as Tigger.

The next pie Christopher Robin handed to Tigger, since tigers bounce so very energetically.

The next next pie Christopher Robin handed to Pooh, who looked at it carefully, sniffed it (and found it smelt sweet and spicy), and then bit into it carefully.

By the time Pooh had chewed and swallowed his first bite of pie (and found it tasted delicious), Christopher Robin had also handed a pie to Piglet.

Then, since Eeyore had been patiently waiting for so long, he also got a pie.

And then Christopher Robin reached into the bag one last time, pulled out the last of the pies, and bit into it himself.  When he was finished, he scrunched up the bag and put it into his pocket.  Then he said good-bye to everyone and went home, for it was starting to get dark.

I’m sorry to say that, however eagerly Tigger had bounced at the sight of the pies, it turned out that he didn’t care for the mince inside very much.  He bit the pie open and tasted it; but then he just played with it for a bit, rather the way your tabby cat plays with a mouse.  The pie finished up rather the worse for wear.  After that, no one particularly fancied the idea of eating it; and, in the end, Kanga tidied it away.  She said nothing; but she thought rather a lot.  What she thought was that it was rather silly of Christopher Robin to give a perfectly good mince pie to a Tigger who only liked to eat malt extract.  However, she was far too polite to say so.

Eeyore didn’t care for the pie much either.  He preferred thistles.  However, he was far too polite to say so, either.  So he ate it all up anyway.  That night he had a touch of indigestion, for the pie was rather rich; but he was all right the next morning.

Next day, Christopher Robin came by bright and early.  This time, he brought with him a large fat spool of bright red ribbon.  “For decoration,” he explained.  He also brought a pair of scissors.  These were not the long sharp type of scissors that your mother uses when she cuts cloth to sew you a blouse.  Nor were they the little sharp type of scissors that people use to clip their fingernails (unless they are naughty and bite them short with their teeth).  Nor were they the sort that a barber uses to cut hair.  They were just the right size to cut ribbon.

Christopher Robin cut a long piece of ribbon and tied it into a big bow.  “To put on your front door,” he explained to Pooh.  “It will make it look very bright and festive.”

Unfortunately, when he went to stick it up on the door, he found that he had forgotten to bring a nail and hammer with him.

“Maybe glue,” he said.  But he hadn’t brought the glue pot either.

“Something sticky,” he said to Pooh.  “That’s what we need.”

For a horrid moment, Pooh thought that this might mean honey.  Honey is certainly sticky.  However, it is also just what bears like to eat; and Pooh did not want to waste any on bows, however bright and festive.  Fortunately, it then occurred to him that he had some drawing pins in a drawer in the dresser in his home.  So he fetched one for Christopher Robin to use to put up the bow.

After that, Christopher Robin declared that everyone’s home should have a bow on the door.  So they set off to visit everyone, taking the spool of ribbon and the scissors with them.  They also took Pooh’s drawing pins.  Everyone was very thrilled by the festive bows, and helped to tie them.  The only problem came when they went to visit Eeyore, for he did not really have a proper home like the others, and certainly didn’t have a door.  However, it turned out all right once Christopher Robin thought about it a bit.  He tied the bow around Eeyore’s neck, instead, and called it a necklace.

“Thank you,” said Eeyore gravely.  “It looks a bit like Piglet’s scarf.  Will it keep out the cold?”

“Well, no,” admitted Christopher Robin, “but it makes you look very—”

Christopher looked at him thoughtfully.  “Not really.”  Then he brightened.  “But it does make you look very festive.”

The next day was Christmas Day.  Christopher Robin was far too busy in the morning to come to the Hundred Acre Wood.  First he had breakfast with the grown-ups downstairs because it was a holiday.  And then he admired the Christmas Tree, which had been decorated while he was asleep in bed.  And after that he was too busy unwrapping presents.  Only in the afternoon, for a little while before going home for tea, was he allowed to run down to the wood to visit his friends.

He came this time with a big bag, almost a sack.  It was much larger than the one that had had the mince pies in it; and everyone gathered round with great anticipation.

However, although they expected a veritable feast, there was no delicious smell of food when Christopher Robin opened the sack.  Instead, when he reached in, he pulled out a small box wrapped in coloured paper.

“On Christmas Day, we give presents,” he explained.  “This is for you, Kanga.”  He handed it to her (for, you will remember, it is always Ladies First), and she opened it carefully.  This took quite some time, for she did not want to spoil the paper, which would be a wasteful thing to do.  She took it off and folded it up, and put it in her pouch to take home.

Inside the paper was the box.  She took off the lid and looked inside.  “Oh, lovely!” she said. “Thank you so much, Christopher Robin.” Then she took out a string of pretty pearl beads.

“Here, let me put them on you,” said Christopher Robin, and helped to fasten them around her neck.

The next present was Piglet’s.  It was a brightly coloured bag, and inside was a dinner’s worth of the very largest, finest acorns, all fresh from this year’s crop.

Then Christopher Robin gave Roo and Tigger their presents.  Roo got a wooden top; and Tigger got a gigantic ball of yarn.  He was really only a big kitten, after all; and all cats love a ball of yarn.

Pooh, of course, got a pot of honey.  “It’s not just any sort of honey,” said Christopher Robin proudly.  “It comes from Scotland.  Mummy bought it in a fancy shop in the big city.”

Pooh said “Thank you,” for he was a polite bear when he remembered.  However, though the idea of Scottish honey was interesting, he didn’t think it could possibly be any better than the honey he was used to.  (When he tried it, though, he found that it did indeed have its own special flavour.  And quite nice it was, too.)

Then Christopher Robin turned to Eeyore.  “I’m sorry, Eeyore,” he said.  “I looked everywhere for thistles; but this really isn’t the best time of year for them.  I even asked Mummy if she could get some thistle flowers from the florist; but she said she was sure they didn’t have them for sale.”

“That’s quite all right,” said Eeyore gruffly.  “It’s the thought that counts.”

“Yes,” said Christopher Robin.  “But you can’t eat a thought or play with it or wear it.  I do wish I had a proper present for you.”

Eeyore rather wished it, too.  His red ribbon bow was now looking rather bedraggled, and nothing like as neat and nice as Kanga’s necklace.   On the other hand, he was by now quite used to being the one left out of things.  “It’s just life,” he said mournfully.  “It’s not as though I haven’t got used to it by now.”

The others felt he was being a bit unfair, since Christopher Robin had, after all, tried to find a gift for him.  Also, they were all too used to hearing Eeyore talk like this.  He was inclined to look on the dark side of things.

Then Christopher Robin’s eyes sparkled.  “I’ve got an idea!” he cried.  Quickly, he took off his coat.  “Try this on,” he said to Eeyore.

The donkey looked as surprised as his long face could manage.  “I have four legs,” he pointed out.

Christopher Robin considered this for a bit.  Then he said, “Yes, but you only need the coat where you feel the coldest.  For me, that’s the top half, since my feet are warm in my boots.  My coat only needs sleeves for my arms.  For you, though, it’s the back half that gets cold, isn’t it?  You turn your tail to the wind.”

Christopher Robin held the coat out.  “Try it,” he said. 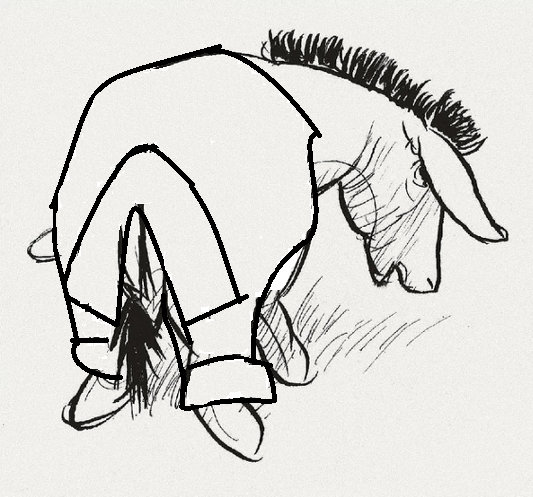