The Truths I Permit

An Wenyi liked to believe that he was a very pragmatic person. He didn’t follow Leader Ye with the same die-hard loyalty of the others. Yes, he helps the Assassins, but only up to a certain point and no further. He doesn't know any of their plans, he doesn't know what they do in the safe house guarded by their little spice shop, and most of all, he is emphatically not involved with the morbid side of the business. He can walk away from them this any time.

He wonders when he got so used to lying to himself.

Merry Christmas, Season's Greetings, and Happy Holidays Grandma! Hope you like it!

An Wenyi stared at the floor as he tried to wrap his mind around the fact that the Janissary Captain Zhou Zekai and his Vice-Captain Jiang Botao were at their small spice shop to "ask them some questions".

Sadly enough, it's not that An Wenyi couldn't fathom a reason for such a visit. It was more that there were too many reasons that he didn't know which one to brace for.

Had one of his medicines gone wrong for someone important? Enough that the Janissaries were called?

Was there something wrong with their taxes (there shouldn't be)? Were they here for a bribe?

Had someone figured out that Qiao Yifan and An Wenyi were not truly husband and wife?

Had someone realized that An Wenyi was not, in fact, even female?

If so, were they now to be arrested for sodomy?

Or would that be seen as a cover story for other crimes? (Rightly so, really).

If so, were those crimes known?

Did they know they had any connections to the Assassins?

Did they know this spice shop was actually the front of a safe house?

Did they know that - mild-mannered, achingly polite, favorite of all the old aunties of their block - Qiao Yifan was the cold-blooded Assassin known as the Phantom Demon? (Even An Wenyi himself struggled to wrap his mind around that one).

Did they know the identities of any of the other Assassins and their Friends?

Well An Wenyi DID know. And he desperately wished he didn't. He liked to believe that he was a very pragmatic person. He didn’t follow Leader Ye with the same die-hard loyalty of the others. Yes, he helps the Assassins, but only up to a certain point and no further. He doesn't know any of their plans, he doesn't know what they do in the safe house guarded by their little spice shop, and most of all, he is emphatically not involved with the morbid side of the business. He can walk away from them this any time.

He wonders when he got so used to lying to himself.

Even now, he knew that the former petty thief, Mo Fan, and the rich merchant's daughter, Tang Rou, were probably crouching in the shadows of the second floor lying in wait. For what, An Wenyi wasn't sure. If a fight broke out Qiao Yifan could probably hold on for the few seconds it would take for them to swoop down to support him. But after that, they'd have to run. The three of them would take to the shadows and the rooftops; running, dodging, killing, and hiding. Whereas An Wenyi could only run on the streets, as fast as he could before his bad leg would give out maybe three blocks later. Could have lasted five if it wasn't already aching from him having to sit on it for the past few hours.

What the Janissaries would do to him when they caught him, he could very well imagine. Drawn and quartered maybe. Or hung from to ramparts. Hung naked from the ramparts actually, on account of his cross-dressing.

That was assuming, of course, that the burst of adrenaline would even get him that far. Maybe his leg would just lock up right here and never give him the chance to fully straighten up in time for any decent head start. The best death would be a quick death by which he was most useful as a meat shield. He'd tackle the officers and cling like a barnacle to buy Qiao Yifan (and any others) as much time to aid their escape. Hopefully that would warrant a nice, solid stab to somewhere important and instantly fatal. Maybe they would even use those fancy new flintlock pistols. He knew they were still horrible in terms of accuracy but point blank range compensated for that quite thoroughly.

An Wenyi's racing thoughts were abruptly interrupted when Captain Zhou cleared his throat.

Alright, it was possibilities three through ten then. An Wenyi willed himself to focus, waiting for what he'd say next, only for the silence to stretch on.

Was this an intimidation tactic?!

Vice-Captain Jiang coughed. "The captain would like to ask you if you have seen any suspicious figures in this area," he elaborated in a pleasant tone. "Occupation, activity, time of day, frequency, and the like. Even signs of suspicious activity would suffice as well."

An Wenyi blinked as Qiao Yifan hesitantly answered No, not really, nothing aside from the usual thugs who just make a nuisance of themselves and throw their weight around, but that was pretty normal.

And thus it continued. The captain would introduce the next subject of inquiry with a short phrase while his vice-captain would elaborate to make it even remotely understandable. In swirling whirlwind of An Wenyi's panic, an errant thought calling them Captain Title and Vice Captain Description of the Encyclopaedic Forces almost made him burst out in laughter. What a disaster that would be.

In the periphery of his vision, An Wenyi could see Yifan alternating between addressing the captain and the vice-captain, completely unsure of what decorum to follow. If this was supposed to be some kind of show of power, it wasn't really working. Qiao Yifan's polite bewilderment was completely in line with his mild-mannered merchant persona. There was nothing in the captain's tone that exerted any kind of stoic, heavy pressure. Maybe it was in his facial expression? An Wenyi hadn't been able to get a good look at either of the officers' faces a while ago and he couldn't very well blatantly study them now but...maybe just a short peek? Just to get a measure of this captain and what he was up to and-

Sweet angels of heaven, did you leave one of your brothers behind? 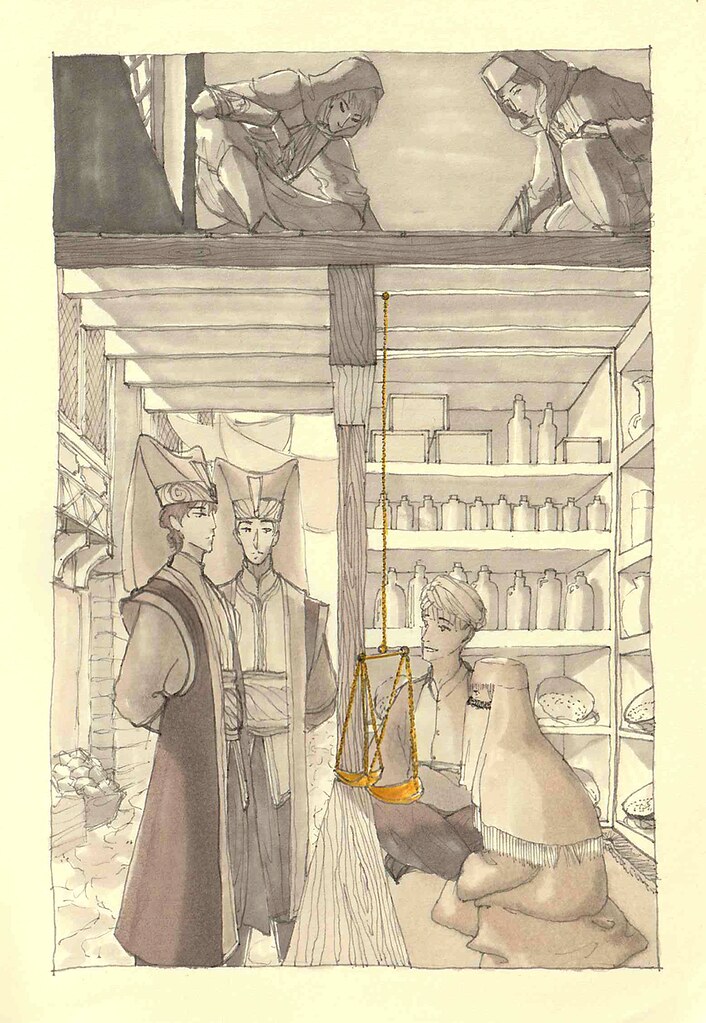 What in the world, An Wenyi thought, dazed. But no, that wasn't even right. Otherworldly. That was more correct. Incomprehensible. Probably. He could scarcely process what he was seeing, after all. How could a man possibly be so beautiful?

Realizing that he was staring, An Wenyi tore his gaze away. Only to land on the sharp, cool, assessing gaze of Vice-Captain Jiang Botao. He remembered now something that he had tried very hard not to learn before. That the pleasant, apparently unassuming man was actually a cold, calculating, emerging player that even Ye Xiu was beginning to take into serious consideration. Absolutely nothing good could possibly come of being memorable to such a person.

An Wenyi dropped his gaze to his shaking hands, chilled.

Trying to figure out the tags like: What to tag if An Wenyi is a man, masquerading as a woman, fake married to another man who he's not attracted to, but just got completely dumbfounded by the sheer beauty of this other man. Things be like that.

Gotta say, Grandma, I was over the moon when you said you said you liked AC: Revelations because yes, Turkey is beautiful. I recently did a whole pile of fanart for a world with an Ottoman-Byzantine setting so this was a real neat turn of events.

That said, I’ve never played Assassin’s Creed before (the closest I got was watching my brother play AC1 and AC2. Yup, I’m one of those siblings) so please excuse any inconsistencies with the game. Everything I know on Turkish culture is from web search and the manga Shoukoku no Altair (which I highly recommend! It’s beautiful and the plot is A+++)

Also, if you're interested, I might add to this. I got so carried away making everyone's back stories ahahahahahaha