With one click of his fingers, Thanos took away Tony’s anchor to the real world. Clint seems to be the only thing keeping him from drifting away entirely..

Written for 1 Million Words Swap of Joy - I've never written these characters although I have seen all of the movies. I hope they are not too OOC! 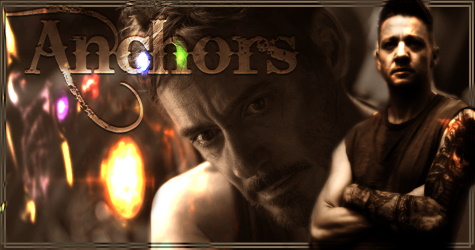 “JARVIS, where are we?” Tony sat up and looked around, wondering if he was hallucinating.

“I can see that. Why are we in a barn and whose barn is it?” Tony put a hand to his head, the hang-over kicking in and making his head beginning to throb.

“I believe it’s Mr Barton’s barn, sir,” JARVIS replied. Shit! Trying to get to his feet, Tony looked around. Yeah, he recognised this barn alright – this was where he and Clint had ended up after their last ‘fight’. Jesus, he needed to get out of there.

“Is – Barton around?” Tony asked, finally making it to his feet. He felt unsteady, no doubt due to the sheer amount of alcohol he had drunk the night before. Another night trying to obliterate the memory of Pepper and what one click of Thanos’ fingers had done to her; another night trying to forget that he and Barton were feeling the same, were needing the same. What did two men like them do when their anchors to the real world were ripped away?

“I do not sense any readings in the vicinity, sir. Would you like me to plot – “

“No, don’t worry about it,” Tony replied, trying to suppress his disappointment. He didn’t recall telling JARVIS to bring him here, but he had obviously felt the need of Barton’s – presence. He absent-mindedly reached into his pocket, finding a candy-cane of all things. It must have been from last night. He opened it and began to suck the candy, the sweet taste doing much to cleanse his mouth of the aftertaste of the alcohol.

The other Avengers had thrown themselves into trying to find a way to reverse what Thanos had done. Nat was efficiently running that part of Stark Enterprises; Rhodey was working with the President and his team; Steve was – well, Steve had Bucky and despite knowing that it had been the luck of the draw, Tony couldn’t help but feel resentful. The one person in his world who understood him, kept him attached to the world – whilst everyone else ‘soldiered’ on, he was – adrift.

With a hand gesture, the suit dismantled itself around him and reassembled next to him, standing ready. If only Tony felt the same way. The closest he had come to feeling reassembled had been that night –

“Sir, there is a vehicle approaching,” JARVIS spoke in his ear and Tony straightened his shoulders and moved to the slightly ajar barn door. He recognised the sound of Barton’s vehicle – he should, he’d worked on it hard enough. It might look like a hunk of junk, but it had several hundred thousand dollars worth of hardware installed and could withstand an attack from a tank. Pepper had said –

Avoiding where that thought led, Tony stood outside the barn, watching the truck come towards him. He could feel Barton’s eyes on him, assessing everything about him – dishevelled hair, dark, sunken eyes, body verging on too lean.

The truck came to a stop in front of him, Barton climbing out of the vehicle. He was markedly different from the man Tony had first met. The sides of his hair had been completely shaven off, the harsh undercut drawing attention to the face that was almost permanently frowning. Clint slammed the door of the truck and stalked towards Tony, predator in every move.

The dark-green sleeveless leather vest and trousers were moulded to his body, thick enough to prevent road-rash, flexible enough movement in combat. The sleeve of tattoos added to the menace of his appearance – Tony knew that they represented each kill, each vengeance enacted. He was running out of room on that arm.

“What the fuck are you doing here?” Clint’s voice was harsh as he reached Tony’s side, arms folded over his chest in a motion that caught Tony’s attention.

“It would appear that scotch makes me think being here is a good idea,” Tony replied, stepping closer. Clint exhaled sharply, looking away.

“Well, get back into your fancy suit and go back to the city. Maybe the rest of your team can do something about the shit-show that’s still going on,” Clint said harshly.

“They don’t need me for that,” Tony replied, attempting a smirk. “That’s what the help is for after all – to do the grunt work. Then I swoop in, make a few minimal changes and take all the credit.”

“Yeah, that sounds about right,” Clint grunted. Unable to help himself, Tony reached out and put his hand onto Clint’s shoulder, the solid strength helping to ground him. This was reality, this was real – Gods from other planets, aliens attacking – none of that felt real. But Clint did. “Tony – “

“Bruce is researching time-travel,” Tony said conversationally, sliding his hand down Clint’s shoulder to rest on his chest.

“Can he do it? Can he get them back?” Clint asked, grabbing Tony’s hand and forcing it to still.

“I don’t know. I find that I can’t bring myself to hope – that is a black hole worse than the wormhole I spent time in,” Tony admitted, gripping Clint’s fingers. He allowed his vulnerability to show, knowing it was mirrored beneath the stoic exterior Clint presented. “If I allow myself to hope and they fail – “

“ – it would be like losing them all over again,” Clint completed his thought, nodding. His grip shifted until he was holding Tony’s hand. “None of this is real without them – you, me – us – if they were here – “

“None of this would be happening if they were here. We wouldn’t be hanging by our fingernails – you wouldn’t have become the dark avenger, I wouldn’t be living in a bottle – I wouldn’t need you to make me feel grounded – “

Clint nodded, turning towards the house and tugging Tony along behind him.

“Until we get them back,” he said and something within Tony relaxed, knowing that for now, Clint would be his anchor. Yippee Kai Yay, Mother Fucker!