In the arms of the ocean

This is a one shot written for @IrisPlumeria on Twitter, featuring a certain amount of after hours beach activities of Firelord Zuko and Southern Water Tribe Ambassador Katara near Caldera. Iris, I would like to wish you happy holidays and I hope you enjoy reading this. Warnings? A lot of softness ahead! I've written this while listening to Never Let Me Go by Florence + The Machine so I'd recommend listening while reading for full experience!

The second piece comes from @zutaramoonshine on Tumblr.

Those are the words that seem to have stuck in everybody’s minds. Ever since the now well known Southern Water Tribe ambassador Katara (thanks to her admirable feats she carried out during the war) has decided to stick around by the Firelord’s side to see the peace negotiations through, the entire city of Caldera has been buzzing with excitement over the unusual union.

Neither of the two bother with putting an end to the gossip spreading like wildfire through the capital. In fact, they seem to be entirely caught up in politics, that is, only when they’re on duty. Days pass filled with never ending meetings with delegations from nearby kingdoms but anything that concerns the post-war future is left behind as the dusk nears. After hours, firelord Zuko and ambassador Katara make it a habit, as well as everyone else’s problem (much to the fire sages’ dismay when councils suffer on behalf of these outings), to watch the sun set and the moon rise every day over the ocean.

Some nights, master waterbender Katara's playful side shows, the one that’s reserved for her closest circle of friends. That’s when the Firelord feels like he’s sixteen again, and he’s just Zuko, while she is just Katara. Some nights, they peacefully tread along the sand, the waves lapping gently against the shore, reaching their feet. Some nights, Zuko allows her to pull him into the ice cold water, never letting go of her hand. 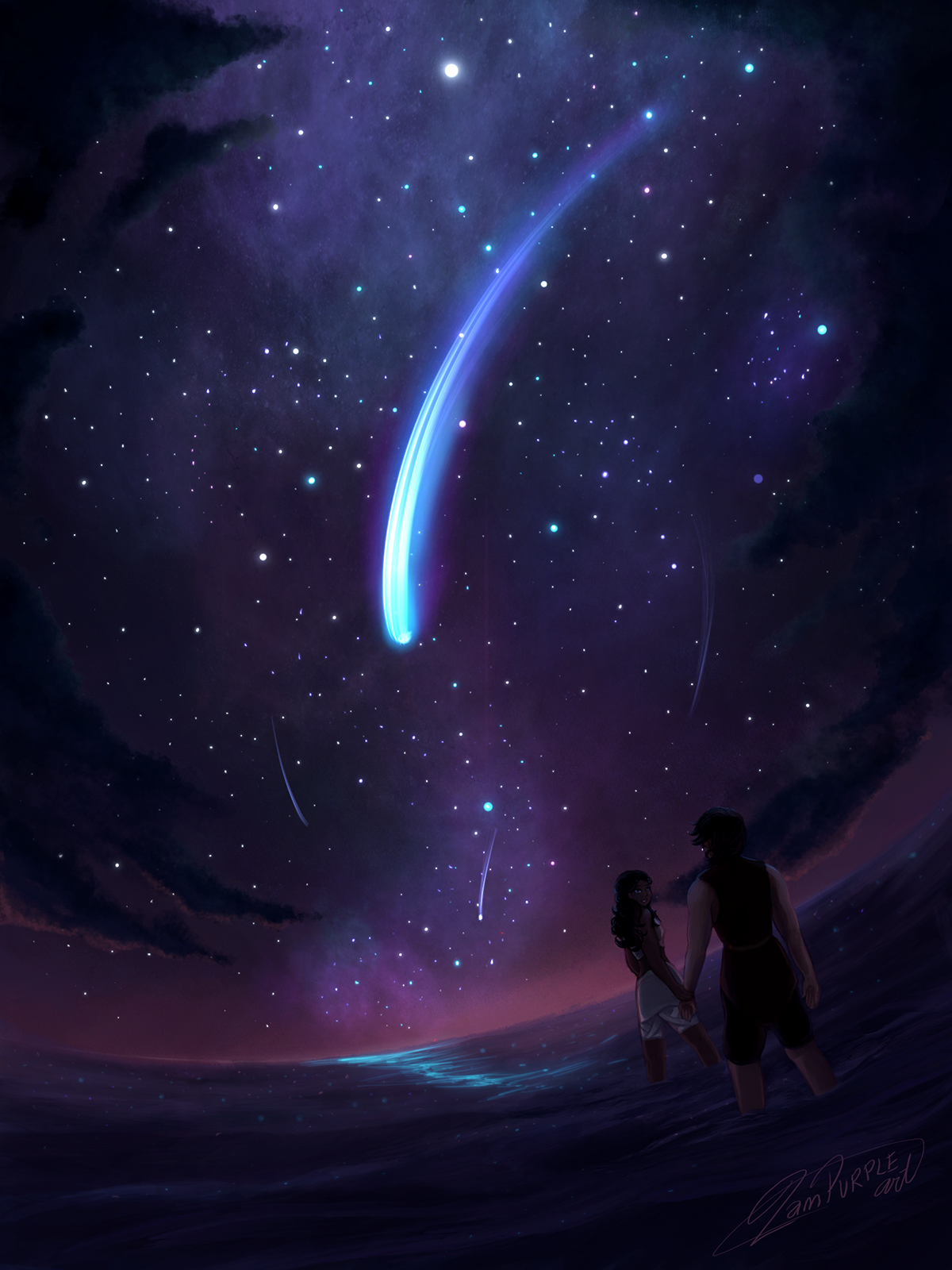 There are many things that can be said about Firelord Zuko, some more and some less polite, and while throughout the kingdom opinions on his reign differ, among his closest advisors and friends, there isn’t anyone that cannot see the way their sovereign looks at ambassador Katara.

The long way they’ve gone together since the third year of the prince’s banishment is no secret, six year olds plead for their mothers to once again recount the tale of Zuko and Katara, Tui and La, the reincarnation of Oma and Shu, the moon and the sun.

Although no one dares say it to their faces, this is what everyone is thinking.

Fourteen year old girls sigh at times, remembering the sacrifice their ruler made, how he was willing to give his life for hers during the final duel for the throne. As Zuko looks back on the events of that day, he now understands the fight was for something more than just his country.

That day, he put his trust in Katara, and since then, he continues doing that every day, as well as he can, proving to her that she is his equal.

Now as they’re sitting on the blanket spread out on the sand, they’re fresh out of the last meeting of the day, cut a little short because of the nearing dusk. Katara's head is resting on his shoulder, snuggled into the crook of his neck and he holds his arm behind her back for support as he watches the sun sink between the waves.

Occasionally, Katara casts subtle gazes at him, studying his face and most importantly, his eyes.

They reflect the rays of the setting sun, taking on more of a warm tint, and if she only could work up enough courage to look deeper into them, her icy blue would meet soft, familiar gold and so many unsaid feelings.

But she doesn’t, talking herself into keeping her cool for just a while longer. Why? Katara doesn’t know what to call the thing that’s stopping her from reaching out for something that seems to be just a stone’s throw away from her.

This isn’t the only matter she isn’t capable of naming. When she feels Zuko’s gaze resting on her features, she can’t help but take note of the warmth rising in the center of her chest and it nearly hurts to wonder, just as it takes everything for her not to turn to the side and rest her forehead against his.

Instead, she focuses on the homely light of the crescent moon while Zuko finds himself getting lost in the cool but comforting blue of her eyes. Finally, he thinks, Katara is calm, gentle just for him, even though she’s endured countless hours of draining meetings concerning the post-war issues that desperately need to be taken care of. The second Katara switches her gaze from the sky and back to his face, every thought Zuko has in mind disappears and he finds his breath nearly hitching in his throat.

"What are you thinking?"

This is the exact question Zuko isn't prepared for and thrown off guard, he frantically searches for an appropriate answer. No amount of firelord training and advice or memorised protocol could have prepared him for the crucial stage in life of courting a woman. And it was not just any woman but it was Katara, master waterbender, who is Zuko's co-fighter, friend, teammate, ambassador, an exceptionally talented politician and negotiator and so much more. Zuko thinks he simply doesn't know words that could describe what Katara means to him, which is why he's doing a terrible job at bringing his plans to life.

Her face falls a little as she notices his slightly distressed look and she lifts her hand to caress his cheek while her fingers slips into his hair at the nape of his neck.

At this moment Zuko is fully convinced he will be losing it in approximately two seconds if Katara doesn't stop looking at him like that.

He trails off, realising he has said her name just for the sake of not staying silent and for the sensation of the familiar three syllables rolling off his tongue so naturally as nothing else does.

"Tell me, Zuko." Katara's voice is understanding, she is patient as she sends him a small smile, giving him time and space to gather his thoughts. Her hands go back to her lap, yet she seems to change her mind rather quickly and reaches forward to draw gentle, reassuring circles on his palm.

Zuko inhales deeply before carrying on, stammering horrendously as he's trying to put his point across.

"I don't know where to even start." he rubs his neck diffidently and Katara finds the light blush creeping up his cheeks endearing. She's been blessed with the moon shining brightly tonight, allowing her to see him more clearly.

"Agni, Katara, I don't think I need to tell you how much we've been through together and… how much has changed since the first time we've met. You know that yourself. But, the point is that, all your time as ambassador… having you here, by my side whenever I get lost - you bring me back, always reminding me why I’m doing this and it makes me feel … secure. Maybe I’m a fool for dreaming of forever... but regardless of every obstacle I come up with, I can’t help but hope that you’re someone I can always fall back on and you’ll be here to catch me. I realised that I- I don’t want to have to watch you leave. I know you mean to do that eventually, go back to your home and I can't blame you. I wouldn't dare assume that you'd ever want to call this" he points towards the city lights - "Caldera, your home. But-"

At this point Katara decides it's time to put an end to his nervous ramble as a few inaccuracies make their way into his speech. She places a finger on his lips to quiet him down and as a result his sentence is interrupted midway when he looks at her with a mix of hopefulness and agitation in his eyes. In hers, he sees tears and goes rigid in anticipation, too caught up in his astonishment to be able to make anything out of her expression.

"You're quite wrong, you know. I love my home, I really do. But given that we've renewed contact with our sister tribe, I'm not required back there. Or at least not as much as I used to be. Now it seems I'm more needed elsewhere. Here, with you, for instance."

In barely a whisper, as if under a sudden wave of shyness, she adds "It would be a lie if I said I'm staying only for the political advantages, to have it easier with keeping up the peace."

Her eyes return to his, glistening in the moonlight and Zuko catches himself mesmerized and unable to say a word when her touch lingers on his cheek again.

"I'm here because of you, Zuko. Because I haven't been able to leave for weeks now. Not only because the people need me but - because I need you. I want to be by your side."

Zuko can feel something letting go inside as his heart twinges with dizzying affection that makes him feel like he will fall into pieces at any given moment now and he can't help giving in to the urge to rest his forehead against Katara's.

"That I cannot be apart from you? That it's getting unbearable pretending I don't want more? That I've stopped seeing you just as a friend a long time ago?"

Her hands end up tangled in his hair again and this time he doesn't mind, his eyes flicking to her lips and back to her eyes.

He savours her name and does his best to collect his thoughts but she's so, so close and he just cannot wait any longer.

Katara can't hold in a quiet laughter because the question is so very Zuko, and she knows she wouldn't dare dream to change anything about what they’re about to start.

"I think it's about time." she mumbles, adjusting herself in front of him as his hands make their way to her waist and his lips finally land on hers, gentle and a bit unsure.

Between the hasty but loving, hungry but tender kisses under the moonlight, between the sea and the city, between the gasps for air, countless hushed I-love-you's are exchanged and neither the firelord nor the ambassador would want to have it any other way. Saying those words comes surprisingly easy, no hesitation in their voices when there’s barely any distance between them and somehow, it feels like everything is finally falling into place.

This night they don't make it back to the palace, their quarters empty while they make as much as they can of the time that’s left until the sunrise as if afraid that daylight could chase the moment away.

It doesn’t, though - with the dawn coloring the sky pink and orange, the sun is at last granted peace in the welcoming arms of the ocean.