Want to know where your donations are going? Check out our latest budget update and donate today! We've raised US$226,367.50 towards our goal of US$50,000 so far!

Afternoon tea time with Team TARDIS, and Jamie nearly ruins it for the Doctor with an innocent observation.

This idea just came to me spur-of-the-moment during a fic-related discussion with the awesome terryreviews, who suggested I explore this little notion in a standalone story. Things are *sort of* ambiguous throughout I suppose, but some Two/Jamie can certainly be implied, especially by the end. ;) 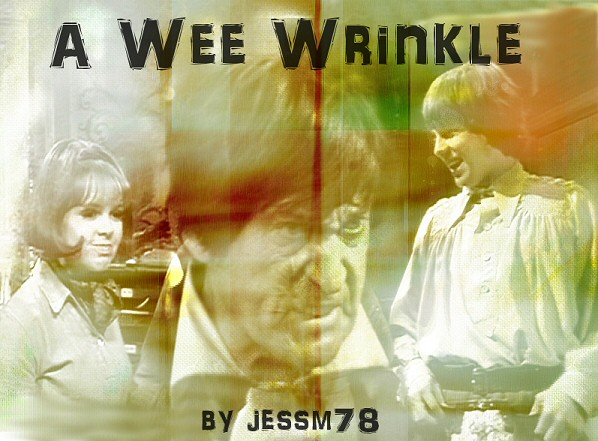 “It's quite simple, really,” the Doctor began as he poured the tea into his cup. He set out a jar of jam as well as a bowl of clotted cream. “The alpha circuits had somehow been rearranged. All it took was putting them back in their original places and the TARDIS was right as rain again.”

Zoe felt her brow furrow in thought. “It can't be that easy, can it?”

“It certainly can, Zoe.”

“Och, look, I don' care,” Jamie cut in. “The TARDIS is back to her ole self an' that's all that matters. I'm fair famished an' it's high time we had somethin' to eat, eh?”

Zoe tried to contain a grin as the Doctor briefly wrinkled his nose in annoyance before heading over to the stove. She caught Jamie staring at his retreating form, the corner of his mouth twitching into a slight smirk. She shrugged, not giving it another thought.

The Doctor soon returned with a plate of scones. “All right, now --”

“Ah! Aboot time,” Jamie declared, reaching across the Doctor and hastily grabbing one.

“Really, Jamie, that's quite rude,” Zoe tutted. Not that it was the first time she'd ever witnessed him doing it – nor the first time she had made him aware. He responded with an exaggerated eyeroll, prompting her to lightly swat him across the chest.

“All right, you two, for once is it too much to ask that we have a peaceful tea time?!” the Doctor nearly snapped.

They both froze, Zoe turning to Jamie and finding him with a similar shamefaced expression. “Sorry, Doctor,” she muttered while Jamie grunted in agreement.

“Thank you,” the Doctor replied. He hummed to himself as he placed his napkin in his lap, picked up a knife and began slicing through his scone before spreading some jam and cream on top. He'd taken a bite and his expression turned to one of annoyance once again. Zoe understood why as soon as she had taken a bite of her own scone: they had already grown cold, not the nice, warm scones she knew the Doctor preferred.

She turned to Jamie, her eyes narrowing in confusion. He was smirking once again, even more so than he'd been earlier. “Ye're doin' it again,” he told the Doctor, his tone light with amusement.

The Doctor stopped mid-chew and turned to the Scot, raising his eyebrows. “Doing what?”

“That wee wrinkle in yer nose whenever ye're unhappy.”

“I don't know what you're talking about.”

“Oh, aye. Ye're always doin' that. Don' think I haven't noticed after travelin' with ye all this time,” Jamie insisted, gazing knowingly at him from underneath his fringe.

The Doctor looked offended. “I do not wrinkle my nose like that, Jamie!”

Zoe had to admit Jamie was right. She hadn't been with the Doctor as long as Jamie had, but she knew pulling such a face was quite typical of him. And, yes, he was doing it now.

The Doctor seemed to be staring her down, as if trying to influence her to disagree with Jamie. In reply she simply stared back at him, trying as hard as she could to keep a straight face. After what seemed like several minutes …

“Yes,” she replied, her face stony and serious.

“Bah!” the Doctor uttered, turning away from her in disgust. He went back to sipping his tea, grimacing as it must have grown cold by now. “Well, if you don't mind, I think I'll clean up here and then have a look at those sensors I've been meaning to fix.”

Zoe smiled to herself in satisfaction, then nearly felt ashamed for doing so. Jamie seemed to understand as he shared a look with her before rising from his chair and approaching the Doctor.

“A 'wee wrinkle',” the Doctor interrupted, appearing irritated once again. “You make it sound so … unpleasant.”

Jamie chuckled. “Well, it's not. It's a part of ye, one we've grown fond of.” He turned to Zoe expectantly.

“Yes, we have,” she agreed. Boy, did it feel a bit odd to say that. But for what it was worth, she meant it.

The Doctor finally turned to Zoe, his tense frown melting into a smile before he turned back to Jamie. “Well, thank you. I suppose it was rather silly of me to even entertain such a notion.”

“Aye, it was,” Jamie joked before his smile became affectionate. “Now, why don' ye leave the cleanin' to us,” he started, gesturing for the Doctor to get up before putting his arm around him, “an' I'll set up the fireplace room so it's nice an' cozy for ye.”

The Doctor seemed surprised but nodded, appearing grateful as he allowed Jamie to lead him out of the kitchen, stopping only once to look back at Zoe.

“Not to worry, I'll straighten up in here,” she told him, forcing a smile. He'd turned back around and as he exited the room with Jamie, she could hear the Scot speaking quietly to him and chuckling once more.

She stood, trying to figure out what they were talking about and then sighed, throwing her arms up as she realized she'd probably never know. At least the Doctor seemed in a better humor now.

Still, all this over a 'wee wrinkle' …

terryreviews and fancyadancebrigadier as well as 2 guests left kudos on this work!