Jack is vexed by a peripatetic fruit.

Isis for improving my fic and giving me the confidence to post.

Captain Aubrey paced the windward side of the quarterdeck, pausing in each turn to scan the horizon with his glass but finding only an empty sea – a pleasantly blue sea, broken by long rollers from some distant storm, with a haze on the horizon.  After pacing his usual measured mile, he mounted to the cross-trees, moving quickly up and up like a particularly large and determined ape.

“The Captain’s in a rare taking,” observed the purser, newly joined at Capetown, to the small group standing on the leeward quarterdeck. “Doubled lookouts, and himself on deck since the middle watch.  D’ye think he has some secret intelligence of that French Admiral’s movements?”

“It’s not that, it’s the doctor, coming in a boat from some forsaken island, and a day overdue,” explained the bosun.

“Which he’s the captain’s particular friend, if you take my meaning,” said the third lieutenant.

“You can take your meaning and shove it, Tom Collins,” Lieutenant Babbington said passionately.

“It’s only what is common knowledge,” Collins muttered.

At that moment the lookout at the masthead brought the conversation to a halt with his hail.

Jack, having ascertained that Stephen was visible in the boat, apparently whole and unharmed, went below to the cabin, where he was shortly joined by Stephen himself, complaining peevishly and dripping water.

“There you are, Stephen!” Jack declared, his face lighting up. “But how did you manage….” He cut himself off and instead called, “Killick!  Killick, there!  Bring a pint of sweet oil, a bottle of Madeira, and the doctor’s fruit!”

“Oil, Madeira and the fruit it is,” Killick said, muttering under his breath, “maybe now some people won’t be keeping to the deck at all hours, never a moment’s rest for Preserved Killick.”

“Fruit, for all love?” Stephen Maturin asked as Jack extracted him from his wet clothing.  “Do you fear I suffer from the scurvy, after a week on land, a land filled with fruit? Not that I had a spare hour to so much as walk into the forest.”

“It is not to eat,” Jack explained, wrapping Stephen in a robe. “That learned friend of yours in Simon’s Town sent it to us, a prodigious curious thing like a cross between a coconut and a pineapple.”  Having divested Stephen of his clothing, he wrapped the doctor’s meagre form in a robe and tied the belt.

“I shall look forward to examining it,” Stephen said, adding in a lower voice, “And to other things, later tonight.  Unless the ship’s business entirely takes up your time?”

“There’s not a moment to be lost,” Jack said, leaning forward with his intent obvious in the blue gleam of his eyes.

He hastily stepped back as Killick appeared and set bottle, glasses, a plate of small cakes, and a cup of oil on the table, then vanished, more quietly than usual.

“Killick, you villain!  You’ve forgotten the fruit!” Jack called after him.

Killick stuck his head back into the cabin.  “Which I can’t find it.”

“Can’t find it?  What nonsense is that?  Did you not put it in my store-room at once?”

“Basket’s there, but the fruit is gone,” Killick said sullenly.

“Well, rouse everything out and look.  It didn’t grow legs and walk off by itself.”

He poured a glass of Madeira.  “I’m sorry, Stephen, I so wanted something to show you.”

“Never worry yourself, my dear,” Stephen said.  “You need show me nothing but yourself to assure my entire happiness.”  He set to work preserving his watch in the oil.

“Your trip…did you find it answered?” Jack asked.

“The usual temporizing delay, endless wrangling, unwillingness to commit to anything.  But in the end, I think I may have brought it off.  I am sorry to have worried you by missing our rendezvous, though.”

“Oh, as to that, I had entire faith,” Jack said. “You never was one for punctuality, Stephen.”

“Hm,” Stephen said, observing the signs of sleeplessness on his friend’s face with affection.  “What say you to a turn on deck and then some music with our supper?”

“With all my heart.”

On deck, Stephen having been called below to a patient, Jack stood on deck looking over the ship’s quarter at the sun going down in a red haze.

Killick appeared at his elbow.  “Which I found it, in a sack of biscuit all torn about by rats.”

He stayed on deck until four bells in the second dog watch, then went below, where he found a basket containing the expected brown sphere waiting in the cabin.

Taking up his fiddle, he stood by the sweep of stern windows and played variations on a theme, a deeply contented air that expressed his entire happiness at having Stephen safely restored.

He was so engrossed in his playing that he was startled when he was joined by Stephen himself.  “How does your patient?”

“That fool of a loblolly boy let Brown’s mates get him drunk, and he fell climbing out of his hammock to go to the head.  I had to re-set the arm.”

“An experienced topman, to be injured in such a way?” Jack marveled, shaking his head.  “Well, never mind that.”  He set down his fiddle and crossed the cabin to the basket.

He lifted the lid and looked in, blinked, then picked the basket up, upending it and shaking it.  “God’s my life, Stephen, it was in here, I saw it with my own eyes!”

“I was here the whole time,” Jack said, looking wildly about the room. “You’ll never tell me rats made off with it under my nose!”

“I would never tell you any such thing,” Stephen said, peering under the furniture.  “Did the gentleman who brought it mention what nature of fruit it was?”

“As to that, he spoke no English, only a sort of French, and I’m not sure I entirely followed his meaning,” Jack said, lifting the cushions of the bench that ran under the stern windows and looking under them.

The cabin being such that all its furnishings could easily be struck below for the clean sweep fore and aft that Jack demanded during the great gun practice, the two soon had exhausted all potential hiding places.

“Well, perhaps it will turn up again,” Stephen said. “Shall we have a little music before supper?  Perhaps we could start with the Corelli and then improvise.”

They played together, the fiddle high and urgent, the booming of the cello providing a reassuring answer, a deep and powerful feeling, until the two came together in a triumphant conclusion.

Stephen leaned the cello against a locker.“You spoke of supper….”

After Killick cleared away the plates from their toasted cheese, Jack dismissed him for the night and gave orders to the Marine sentry at the cabin door that he was not to be disturbed except in case of emergency.

“Wherever the fruit has got to, the important thing is that you are here,” Jack said, pulling Stephen close and kissing him urgently.

“So I am,” Stephen said rather breathlessly.

They proceeded towards the Captain’s sleeping cabin, exchanging kisses, Stephen plucking at Jack’s clothes until he could run his hands over bare skin, Jack undoing the belt of the robe Stephen had insisted on continuing to wear, the night being so warm.

They reached the cot, which was rocking gently with the ship’s motion. Jack put his hand in to pull himself up, then leapt backwards, crying “Oh!  A serpent!  There is a serpent in there.”

Stephen advanced on the now wildly swinging cot. He reached in and removed a round, brown object, cradling it in his arms and comforting it. “Hush, acushla, he didn’t mean anything by it.”

The fruit unrolled to extend a long, pointed nose and peer myopically at him with small boot-button eyes.

“It, or she, as I believe, is a pangolin, a scaly anteater,” Stephen explained as the creature climbed onto his shoulder, investigating his collar with a slender pink tongue.  “And thus we solve the mystery of the wandering fruit.  Being nocturnal, she stayed safely curled up during the day, producing the spherical appearance you remarked on.  But Jack, she must have something to eat. I suppose you are opposed to taking aboard a termite nest, even if it be only a moderate-sized one?”

“Could she make do with bargemen, do you think?  We surely have a large supply of the reptiles on board.”  Jack watched as the pangolin climbed over Stephen’s shoulders, clinging to his robe with sharp claws.

“Biscuit at the high weevil stage and an egg might make an acceptable pap,” Stephen said.  “Let us obtain some at once.”

In his cot alone, Jack dozed off, woken by a shaking as the cot threatened to capsize.

“Wake up and bear a hand, Jack,” Stephen said, hanging awkwardly onto the side of the cot.

“Stephen!”  Jack hoisted him in directly.  “Where is your beast?”

“I locked her in your dining cabin with her supper,” Stephen explained, settling himself comfortably in the crook of Jack’s arm. “She needs light and air.”

“What happened to my robe?” Jack asked, realizing as his hands roamed over Stephen’s body that the doctor now wore a shirt.

“As to that, she didn’t wish to let it go.  The claws of a pangolin are very powerful, designed as they are for ripping open termite mounds.  And, you know, the tongue of the pangolin….”

Jack cut him off with a kiss.  “…is of much less interest to me than yours.  Now that she and you are both safely secured from your wandering, I mean to concentrate on the business at hand.”

“Mm,” said Stephen, as Jack’s hand got down to business. “I am of entirely the same mind….” 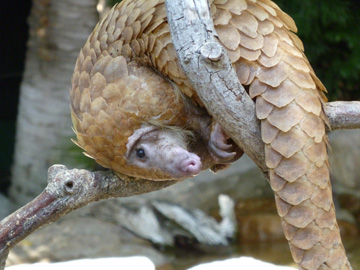 janet_carter, thank you so much for the lovely prompt! This was my first try at writing Jack and Stephen (and my first Yuletide) - I had a lot of fun doing it, but the main thing is, I hope you like the result....