A therapy goat, he thought. It was all Bucky could do to keep his eyebrows from furrowing into one megabrow. "Seriously?"

... in which, despite being entirely at home in the big city, Bucky finds himself experiencing a pang of nostalgia for the little herd of goats he looked after back in Wakanda.

Here we are, it's my written entry for (Not) Another Stucky Big Bang! Massive thanks have go to the incredible Kit Bananas for being an incredible artist to work with, and for so patiently putting up with my months and months of panicked creative inertia. I AM NOT WORTHY. 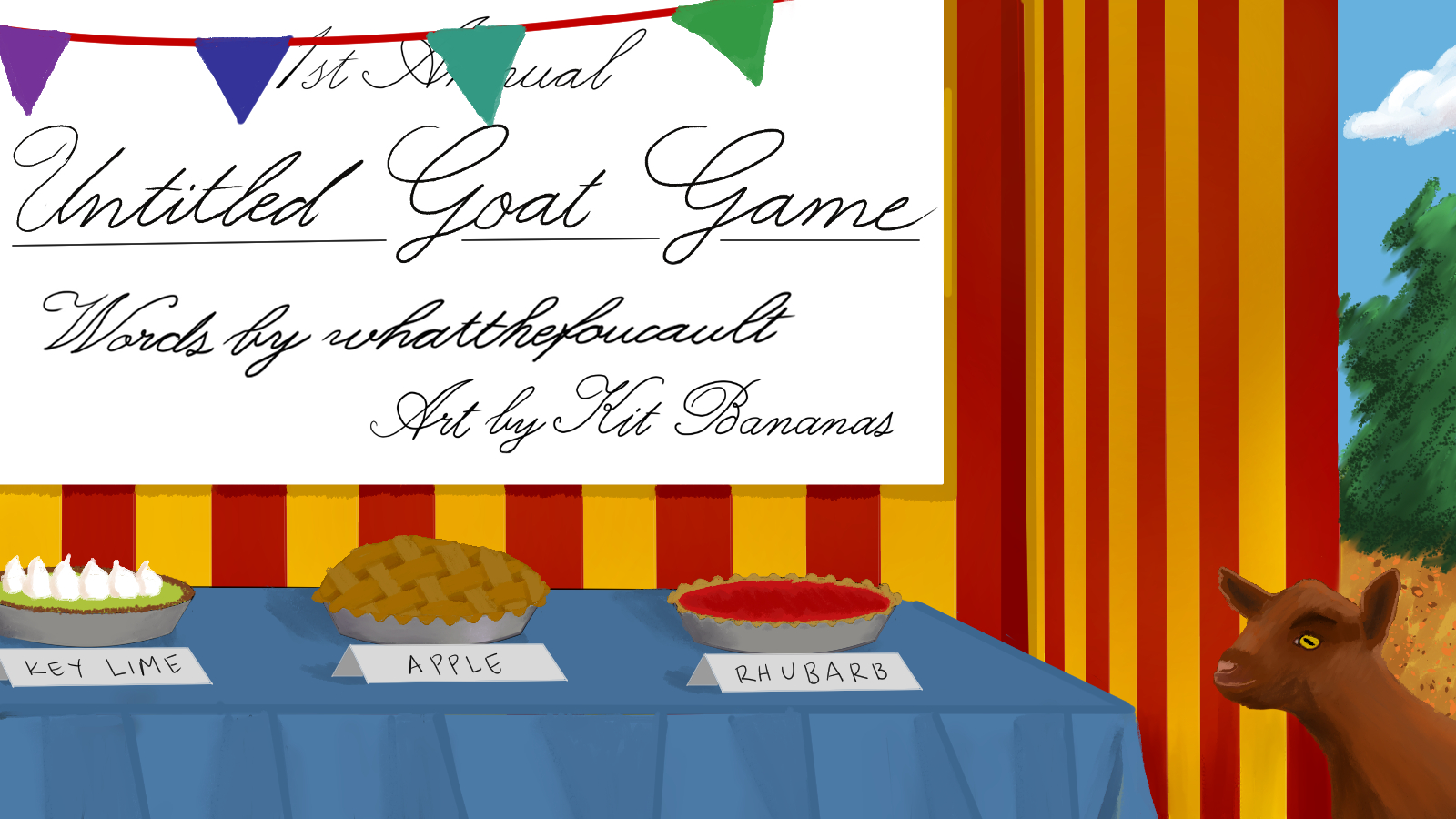 “Oh jesus, it fuckin’ stinks in here.” Bucky fanned his hand through the air as he stepped into the apartment, knowing entirely well it would do nothing to dispel the stale-house funk. “Get the windows open, quick.”

“It’s just a little stale,” countered Steve, “can we at least set our bags down first?”

“Did we leave anything out in the kitchen?” Bucky kicked out of his tightly-laced hiking shoes with a soft grunt, the relief that came with being safe and in sock feet almost immediately giving way, once more, to the smell.

“I’m sure we put the leftovers away,” replied Steve, dropping his overnight bag onto the sofa with a heavy plop. “And we got breakfast on the road.”

“Uhh, Steve,” said Bucky, noticing the stack of tupperwares on the kitchen counter, “remember how you packed a picnic for the drive up?”

“Oh god.” Steve’s shoulders sunk, as though he had just been punched in the stomach by a mid-tier henchman. “We forgot the picnic.”

Bucky stared down at the once tempting array of stale artisan bread, an assortment of mushy berries, a little vine of organic cherry tomatoes that were probably fine, a bottle of lemonade which thankfully had a best before date of several months away as long as it remained unopened, and most disappointingly of all,

While Steve flung open the living room windows, Bucky tore through the less-visited kitchen cupboards: past the paper bag of potatoes that had sprouted before they left and were now close to gaining sentience, past the Japanese floor cleaning wipes neither Steve nor Bucky could figure out how to attach to their weird mop, past the dustpan and brush, past the other dustpan and brush Bucky impulse-bought at Bed, Bath, and Beyond because he could not remember if they owned one, and then. There it was.

An unused canister of Febreze odour-eliminating spray in a signature scent it optimistically called Whispering Woods. As long as it erred more on the side of pine needles and less on the side of bear shit, Bucky truly could not care less what scent it was at this late hour of need.

Steve slid the entire picnic hamper into a nearly-empty plastic garbage bag, sealing it up before Bucky could protest that they could have at least salvaged the lemonade. Instead, he filled the air with a generous spray of the smell of cedar and pine, which mingled with the cheese funk to create an aromatic profile that smelled, at least for the moment, like a basement that needed a good airing out. They retreated to the bedroom, giving the rest of the apartment a few minutes to recover.

“I’m so sorry, Buck,” Steve said softly into Bucky’s neck, arms draped over his shoulders. “That cheese deserved better. I had a sample of it at the store... god, it was so beautiful.”

It was all Bucky could do not to laugh. “Jesus, punk, it’s just a chunk of milk. We can go back to the store.”

“Hell, we can get lots of kinds of cheese!” Bucky’s smile burst into an affectionate chuckle. “You can leave some of it on the radiator, or under the bed, back of the closet…”

“All right, all right, I get it!” Steve threw his hands into the air, shimmying out from behind Bucky. “You’re a real wise guy, you know that?”

“I’m not so sure, pal,” Bucky sighed. “I married you, so my wisdom’s definitely still up for debate.”

Steve collapsed face-first back onto the bed, Bucky’s legs pinned beneath him.

“I love you, Buck,” he said, or at least that was what Bucky thought he had heard, muffled by their fluffy duvet.

“Love you too, Stevie,” said Bucky, leaning down, squishing Steve in an awkward pretzel of an embrace. “The cheese didn’t ruin the honeymoon.”

“So did you see they’ve stopped doing the pear and cardamom jam doughnut? I could legit cry. This, plus that little Mexican bakery that’s been there since the 60s, except it closed down because rent, of course, and now that whole building’s gonna be another fucking Walgreens... what the hell happened to this town?”

Beth sipped loudly at the end of her iced coffee: it was from one of those ubiquitous chains that whizzed them all up in a blender, but never well enough, leaving a very tasty, syrupy sweet first few sips, followed by an impenetrable, tasteless frozen block of ice chips too large to suck through a rapidly disintegrating paper straw. He could see that most of the generous drizzle of caramel sauce had long since adhered itself to the underside of the lid.

“They used to do these little doughnuts that, like...” she gestured animatedly with her hands, as though searching for a word. “They were boring, but they were really good boring, you know?”

“Yeah, I think I do.” Bucky had always understood simple things done well. Perhaps, he sometimes wondered, if it stemmed from living through times when simple was all they had, with no rainbow sprinkles under which to hide a disappointingly dense bit of pound cake. Either that, or he had been spoiled by the presence of an exceptionally skilled Grandma during his formative years.

“RIP pear and cardamom jam, though.”

They were twenty minutes into the week’s therapy session and Beth had yet to pivot the conversation away from food. Bucky did not mind. Sometimes, it was good just to talk to someone about something as silly as a goddamn doughnut.

“You know I know how to make jam, right?” he asked her. “And doughnuts. I, I make them for Hanukkah.”

“Oh my god, that’s so rad!” Beth beamed. “When are you gonna set up your own pop up bakery?”

Bucky shook his head fondly. “I don’t think so. Too much attention.”

It was partly through Beth’s own insistence that Bucky was apt to remember that recovery was never a linear path smoothly forwards from Point Trauma to Point 100% Better Forever; indeed, even when better times seemed more normal than otherwise, and bad brain days were fewer and farther between, seeking any kind of attention very much belonged to the Old Bucky, and this Bucky - the one who, as Beth so eloquently put it, had Been Through Some Stuff - still saw attention as too great a risk, and always best avoided.

“In a city full of pop-up bakeries?” she asked him. “Well, then you must know your jam’s good enough to get ’grammed. Maybe you should start paying me in jam.”

“I’m kidding. Do you know how much rent is on this fucking office? I’m like perpetually thisclose to having to move to, like, Connecticut.”