Written in 2006. Set early S5. Justin is home from LA, Mel and Linds are split up. Three different perspectives on a trip to the Mall.

It was all Justin’s fault. Brian was sure of that. He’d been the one who’d suggested that it would save time if Brian picked Gus up and took him to the Mall, and he’d fucking sworn that he’d meet them right on the dot of three and take over the whole “visit to Santa” duties. Now it was more than ten past three, and Brian was stuck with a four year old who was insisting that they need to get in the queue right now or they might miss out on meeting Santa.

Brian had wanted to tell his son in no uncertain terms that center management would have Santa there till the very last minute rather than miss out on a few extra dollars, but, confronted with Gus’s wide eyed excitement, he hadn’t been able to.

That didn’t improve his mood.

By twenty past, standing in the queue, clutching the very sticky hand of his over excited son – he guessed the coke hadn’t been a good idea, and it was probably just as well that Gus had spilled most of it, but Justin could pay to get his Calvin Klein jeans dry cleaned – Brian was more than ready to explode.

When Justin arrived, and, instead of offering groveling apologies, told Brian to get over himself, the fat well and truly hit the fire.

Brian told him exactly what he could do with himself and stalked off, abandoning both of them without even a backwards glance.

It was typical of Brian, Justin fumed, that he not only threw a hissy fit because he actually had to stand in a queue for ten minutes, but that he totally blew a gasket in front of his son and then just walked off and left Justin to clean up his mess.

He took a deep breath, swallowing down his own extreme irritation with the asshole, and smiled down at Gus.

Justin seethed as he forced the words to come out sweetly. Adding insult to injury, now Brian had him telling a flat out lie. All Brian had done was to fuck him into the mattress this morning and then hang around the loft all day while Justin – late because of Brian - had rushed over to his mother’s to drop off Molly’s present (because she was spending Christmas with Craig), then to Deb’s to provide her with his mother’s recipe for roast goose (because Brian had announced he was sick of turkey) and finally to Daphne’s to give Daph her Christmas present before she headed off to Massachusetts for Christmas with her grandparents.

That he’d made it to the mall at all, considering that he’d had to bus it everywhere because Brian had the car, had been nothing short of a miracle. It was snowing, bus schedules were for shit, and all Brian could do was to throw a fucking hissy fit at him because he was a few minutes late.

Well, whatever Santa might bring him, the asshole could forget about getting any home brewed loving, that was for fucking sure.

Not that he’d probably even care. He’d just head out to fucking Babylon or the baths and get all he needed there.

Meanwhile, he’d probably left poor Gus scarred for life. As if it wasn’t bad enough that his mothers were fighting all the time, now Brian had to yell and scream in the middle of the mall, make Gus feel like his … well, okay … they weren’t his daddies … at least, Justin wasn’t anything … Justin was only the one standing in line with the poor kid so he could see Santa.

He pushed another smile onto his face as he looked down at Gus.

“Not long now, we’re nearly there,” he said, all the while wondering if he could put Brian’s cock into some sort of locked harness while he slept and refuse to give him the key till … well, sometime after he’d been made to suffer, anyway.

‘My Daddy’s funny’, Gus thought to himself. ‘He went all red and said funny words and then he ran away. I wonder if he ran all the way home. I bet he could. I bet he could do anything.’

‘And my Daddy works harder than anyone else’s Daddy, too,’ he thought. ‘My Dus said so. Daddy worked so hard this morning he’s really tired. Maybe he went to have a nap, like I do in the afternoon. Maybe when I’ve seen Santa I can go and have a nap with Daddy.’

‘And Dus could nap with us too,’ he thought. ‘Dus and Daddy like to nap together. I know they do, ‘cause once they sneaked up into Uncle Mikey’s room for a nap. I went in and found them. Uncle Mikey yelled because he didn’t like them using his old room. And Momma didn’t like it because she doesn’t like anything Daddy does. She’s stupid. She yelled at Daddy and at my Dus. She yells a lot. But she doesn’t look pretty when she yells like Daddy does. She just looks mean. I’m glad we’re not living with her any more. I like living with just Mommy. And Daddy and Dus like it too, ‘cos they come to see us all the time now Momma’s not there being mean.’

He looked up at Dus, who’d just said something to him. He hadn’t really heard him because it was so noisy here, but Dus was smiling.

‘Other kids have Mommies and Daddies,’ he thought with a great deal of satisfaction, ‘but I’m the only one I know who has a Dus.’

He swung a little on Dus’s hand, and laughed.

“Steady on, sonny boy,” his Daddy said, appearing out of nowhere, because Daddy was like that. “You’re getting too big for that. You’re so big you’ll pull him over and then you’ll be squashed underneath.”

Daddy pulled some wipes out of a bag and helped him clean up his hands.

“Don’t want Santa to think you’re a little grub, do we?” he asked.

Dus looked at Daddy like he was going to say something, but then he didn’t.

Gus smiled at them both.

Then it was time for him to meet Santa. Suddenly he was nervous, but Daddy and Dus held his hands so he walked up and sat on Santa’s lap like a big boy.

While he was talking to Santa, he noticed Daddy and Dus holding each other’s hands.

‘Maybe even Dus is scared about meeting Santa,’ he thought, ‘so Daddy has to hold his hand. Cos my Daddy isn’t scared of anything.’

Dus must have been really nervous, because while Gus was getting his gift from Santa’s elf, he saw Daddy put his arm right round Dus’s neck and whisper something to him. Dus went all red, but then he smiled, and this time it was a real Dus smile. The kind that made Daddy call him Sunshine.

Gus ran to Daddy and Dus to show them what he’d got from Santa.

Daddy made a funny noise when he saw the little yellow car, and Dus stepped on his foot.

‘My Daddy’s funny,’ Gus thought. 'He makes me and Dus laugh all the time.' 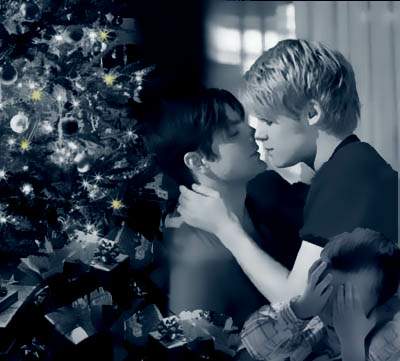