The Twelve Days Before Christmas

Win gifted Team a holiday trip to the Maldives for their anniversary, and Team gave him a much better gift.

Merry Christmas/Happy Holidays, everyone! This is my gift for you! I hope you'll like this short epilogue. I wish you a safe and Happy New Year!

The twins’ birthday party this year was less hectic than the first one. True to his words, he held the party in Pharm’s restaurant. But that reprieve was but a small thing during this season. Last year, they were unable to celebrate their wedding anniversary because they were focused on the twins. It was certainly easy to remember the date of every important occasion in your life if most of them have the same dates, but that just means that you need to pick which one to celebrate. This year, Win and Team left the twins with their grandmother and grandfather for a much-needed vacation.

Team was relaxing on the lounge chair situated by the private pool of their rented villa. He was wearing a swimming trunk, sunglasses, and nothing else. Win came out of their lavish bedroom, with its king-size bed and canopy, holding a glass of tropical fruit juice. He sat on the unoccupied lounge chair and handed Team the glass, which he gratefully took.

“Did you put on a sunblock?”

“It is the perfect season to visit the Maldives.” Win frowned when he heard someone hollered from the other suites. “That just means there are more visitors around this time of the year.”

“We should come back with the twins next time.” Team said.

“Okay… but these two weeks off are just for me, okay? Mom and Dad will call if they need us, but I want all of your attention.” Win pouted.

Team took off his sunglasses. “Aw… Was I not paying you enough attention, Hia?” He moved closer.

Win met him halfway. “I just miss the times when it was just you and me…” He pressed his lips on Team’s, slowly tilting his head to find the right angle, opened his mouth, and coaxed his husband’s mouth open.

Team moaned and wrapped his arms around Win. When the older man made a move to lift him, he wrapped his legs around his waist, groaning when their growing erections rubbed against each other.

Win carried Team inside their hut and laid him down on the soft white bed. His lips made a trail from the mouth down to the navel, and back up to wet the left nipple with his tongue. He pulled Team’s swimming trunk off and pumped the heavy rod between the younger’s legs. Team moaned out loud and pulled Win’s hair. His back involuntarily arched as Win changed targets and began licking the other nipple. They didn’t leave their accommodation the whole afternoon…

Team frowned when he sat in front of their reserved table in the resort’s restaurant. He was sore from all the activities and his stomach grumbled from being empty for far too long- his last meal was hours ago when they were still in Thailand. He couldn’t stop himself from swallowing when he smelled the aroma from the seafood platter served on the table opposite them.

Win turned to see what he’s looking at. “You know you can’t eat those, right? You’re allergic to seafood, Team.”

“Allergic to some of them.” Team pouted. His eyes watering.

“Sorry, baby. I already ordered our steak. I can’t have you experiencing anaphylaxis out here. Even though the resort has a clinic, it’s still almost an hour to an actual hospital.”

Team clutched his stomach. “I know.”

They didn’t wait for long before their food came. Win reached out for the champagne bottle and opened it. He poured some on the champagne flutes and handed Team the other one. “I know your tolerance to alcohol is not impressive.” Team glowered at him. “And I would rather you not drink at all, but today we’re celebrating our anniversary, so… Happy Anniversary, N’Team!” He raised his glass and made a toast with Team before downing its content. He noticed that Team didn’t drink his. “Is there something wrong? You usually take every chance you can get to taste alcohol?”

Win was confused. “O-okay?” He took his knife and fork and began cutting on his steak. He watched as Team ate his meal with gusto. He shook his head and smiled when Team beamed.

They were lying down on the bed after an hour of night swimming. Their hair was warm from the hairdryer. He was scrolling on his phone, liking all the pictures of the twins that his mother-in-law posted on Instagram. “Look, Hia! Mae brought the kids to an aquarium today!” Win glanced at the screen and agreed, looking at the pictures with tenderness. “Hmmm… Do you want to hold another baby in your arms seven months from now?”

Win stared at him. “You mean you’re…?” He glanced at Team’s flat stomach. 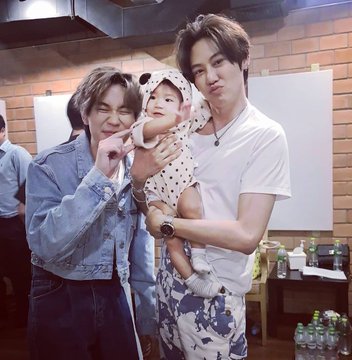 That’s the end of this drabble-like story. I’m aware that there are many parts where I could’ve added more information and details, and there are parts that are repeated (in a sense). I’m so sorry about that. Still, I would like to thank everyone for giving this story a time of your day. Thank you so much! Please look forward to more WinTeam fanfic in the future!