The Perils of Gryffindor Gatherings

Draco will do almost anything to be in the presence of Hermione Granger... including attending a Gryffindor Christmas gathering. 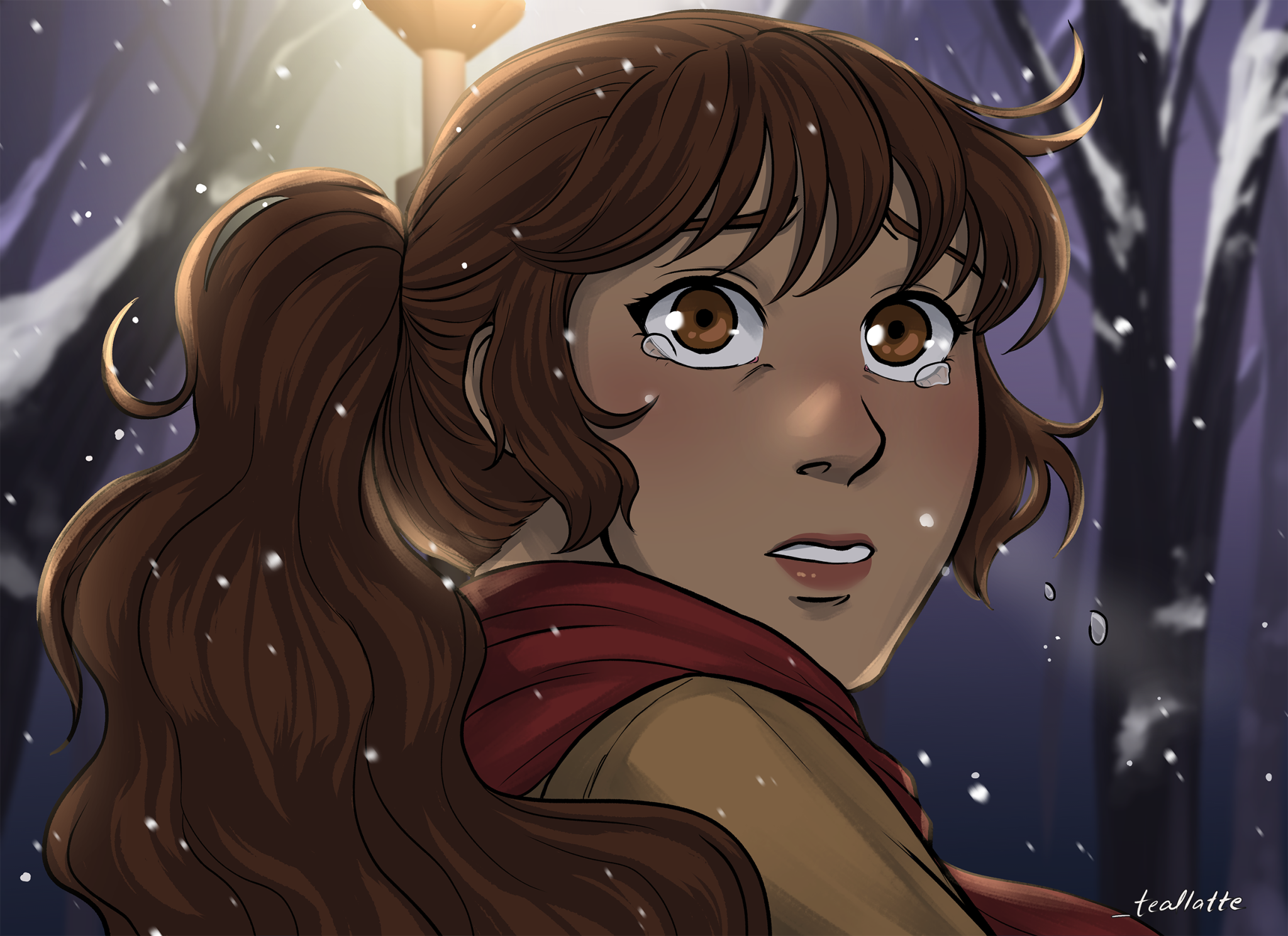 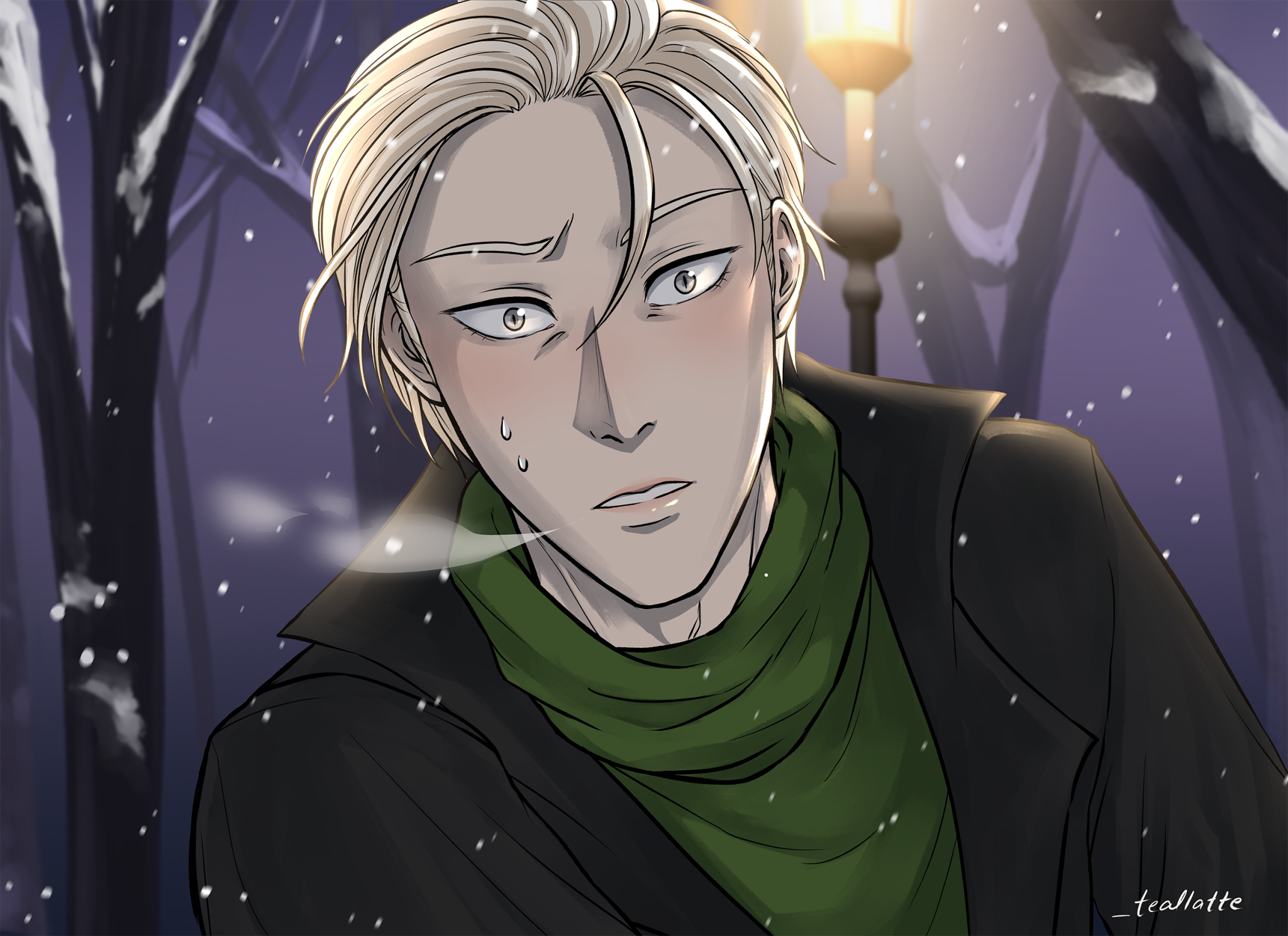 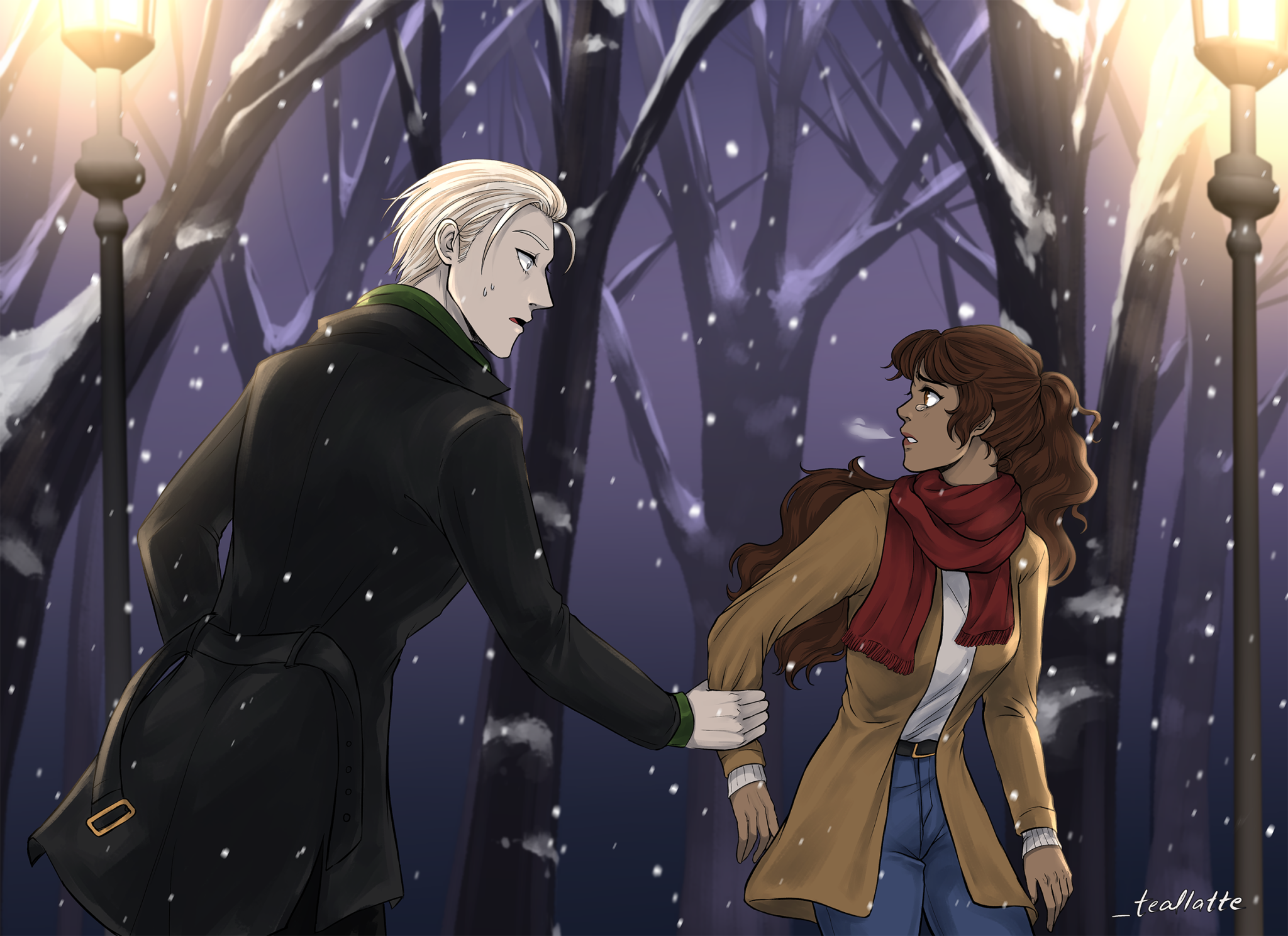 Draco didn’t much care for the holidays.

Didn’t much care for crowds, or merriment, or obligations of any sort.

And had it not been for the clear invitation from a certain curly-haired witch that he was currently— and utterly— besotted with, he’d not be at this damned pub to begin with.

A reunion , she’d called it. Draco had choked at the audacity that he’d spend a night with the worst Gryffindors in the history of the world. But even before he’d considered saying no, he'd agreed.

He blamed the start of his pining on their proximity in the Minister’s office. For nearly five years now they’d worked in each other’s orbit. After leaving Hogwarts, she’d risen in the ranks until she was Minister Shacklebolt’s Senior Undersecretary. The Ministry of Magic couldn’t run without her and, as he headed the Potions Regulation Department, they seemed to always circle each other.

What had started as passive-aggressive interactions soon turned professional, turned cordial. Soon they were… well, they were friends— sort of.  They’d had many a working lunch and sometimes he could even make her laugh, though usually it was just at him.

Then around her birthday this past fall, it’d slammed into Draco with all the force of a wayward bludger. He actually bloody liked the witch.

With almost any other witch in the world, he’d already have begun charming her the only way he knew how: charisma and every luxury his galleons could afford.

But she seemed unaffected by his charms, always laughing at him when he tried to be suave. And she didn’t seem one for fancy dinners and gifts. More times than not she had a wilted salad in her hands as she stormed across the atrium.

So his ways of wooing the witch were limited to shameless workplace flirting and cold lunches in her office. He was horribly out of his element.

When the opportunity came to attend a reunion of their fellow classmates, he knew he’d take it. It was an evening— with alcohol— in her presence.

But nearly as soon as he arrived at the Three Broomsticks and saw the throngs of idiots, he’d wanted to tuck tail and run. Thankfully, a riot of curls in a red sweater stepped into his vision and gravity shifted.

“Malfoy, there you are!” Granger reached for him, her smile bright as she linked her arm around his. It was the smallest touch, one he’d seen her do with a dozen other people, but it set his heart fluttering into the back of his throat. “Listen, I know you’ve got your proposal to regulate the control of certain endangered potion ingredients up in the Wizengamot. Neville is here and I think he’d make a great testimony. If you want me—”

“You look beautiful,” he blurted, heat coloring his cheeks at his own candor. “Sorry, I didn’t mean to interrupt but, I thought you might want to know.”

A slow smile unfurled on her lips and for the first time since their arrival, she really looked at him. “You don’t clean up so bad yourself, Malfoy.”

Shaking his head, he scattered thoughts of taking her in his arms and kissing her breathless. “Right, so Longbottom…”

“Yes.” She swallowed thickly and turned back for the crowd. “Longbottom.”

Of all the ways that Hermione bleeding Granger could torture Draco, it seemed she had found the most painful one. Listening to that git go on and on about the perils of unsustainable harvesting and conservation was one of the lowest moments of Draco’s life. And he’d had a good fair share, if he was being honest.

Finally, when long-winded Longbottom was tugged away by Lovegood for other various forms of merriment, Draco relaxed. His gaze wandered around the party and while there were a few sneers ( thanks for that, Weasel ), it seemed that Draco had mostly assimilated into the lives of the good. They barely even noticed his lurking anymore, and it left him free to watch the witch across without shame.

She glided almost everywhere she went, practiced, easy laughter floating from her lips as she moved from guest to guest. Until, just briefly, her attention fell on him. Her smile had the oddest effect on his belly and just as he’d set his intention to seek out a few more minutes of her graces, an old ghost appeared.

“Now, there’s a sight for sore eyes,” a familiar voice purred over his shoulder. His hackles rose as he turned to peek at the witch. Astoria Greengrass.

The witch was pernicious. He’d paid more galleons than he was proud of to contest the marriage contract his parents had signed on his behalf when he was a minor; that seemed like a pretty large sign that he wasn’t interested in being in a relationship with the youngest Greengrass.

She, however, didn’t take it as such. For five bloody years, she’d just show up . It was maddening. Shaking her off was like trying to get a cornish pixie back into a jar.

“Funny seeing you here,” she said as she came to stand in front of him. She was dressed, as usual, brazenly. Her petite figure on full display and far overdressed. Most people were in jeans and jumpers, and here she was dressed for a night of man-trapping.

Astoria Greengrass did not run in these circles and was years younger, so the chance that she somehow got an invitation, seemed unlikely.

Grating laughter fell from her lips and Draco flinched from the noise. She stepped forward with her fingers walking a trail up the buttons of his shirt, and he sneered at her. “I just wanted to say Happy Christmas personally. I take it as no coincidence you know I’m here, seeing as how you’ve chosen here to stand.”

Draco gently brushed her fingers away. “What are you on about, Astoria? I don’t like your riddles.”

The edges of her eyes tightened in a predatory smile, and she pointed her finger up towards the post, of which he was leaning. Sure enough, there was a bundle of green mistletoe tied together with a gold ribbon.

Astoria yanked him down by the collar until her lips were pressed against his. His hands landed instinctually on her hips and for the briefest moment of confusion, his eyes fluttered shut. It took all of one heartbeat for his eyes to slam open and land on the one person he actually wanted to be kissing. The one woman looking right at him, her jaw open and her eyes frozen in a pained expression.

Draco pushed Astoria away and wiped his mouth like her lips had been laced with love potion— which he wouldn’t put past her. Then, his lip curled and he narrowed his gaze at her. “Let me say this plainly, Greengrass. I don’t want you. Will never want you. And you lay hands on me again, I swear, you will regret the day your parents even mentioned my name to you.”

Scoffing, the witch petulantly stomped her foot and then gave him a dainty, painted middle finger. “You’re a fool, Malfoy.”

“You’re a pest, Greengrass.” Draco stomped past her, searching the crowd for the curly-haired witch. Just as the door swung closed, his heart sank and he pushed through the crowded floor until he was tripping through the door and into the snow.

He craned his neck down to peer down the alley, and then whipped his head towards the path leading to the castle. She was there, of course, stomping her way through the fresh snow with rigor.

“Granger!” he called out as he ran after her, unsurprised when she didn't slow. “Granger, wait!”

His fingers closed around her elbow, and she reeled on him, a mix of disgust, anger, and sadness on her small features. Though it was the tears that rendered him speechless. “What, Malfoy?”

Words failed him. “Where’re you going?”

She huffed out an indignant breath and yanked her arm back into her own possession. “You know, for someone who I thought was quite brilliant, you really are daft.”

Draco blinked at her. “Excuse me?”

“Are you the stupidest man on the planet?”

With a mirthless laugh, he threw his hands up in defeat. “I hadn’t considered myself as such.”

“I invite you here, to come with me, and try to make sure you don’t feel uncomfortable by getting you important networking connections and people to talk to, and then you go and kiss that smarmy little—”

“Wait—” His heart leapt into a frantic cadence. “What do you mean ‘come with you’? Like… like a date?”

She scoffed. “Apparently not. Apparently all my subtle signals and obvious flirtations have been wasted on you since clearly you’re still hung up that bint.”

His shoulders sagged in defeat. “Are you fucking crazy?”

“You don’t flirt, Granger. I flirt. I’m the one who has been trying to get your attention for months, and I’m forced into the shadows of your sad little office if I want to spend time with you because you can’t seem to figure out that after all these years I’m bloody mad about you.”

Granger straightened to full height. “You… you’re mad about me?” She shook her head. “No, that’s impossible, because I am the one who is quite clearly mad about you and you never ask me to even get a cup of tea, might I add.”

“I know,” he deadpanned. “That’s because I just bring the bloody tea, Granger. How many times do you really think I need to visit the damned Minister’s office and just happen to have a cup of tea with no sugar?”

Blinking away her tears, Granger took a small step toward him. “So you— you don’t like Astoria? Because I didn’t invite her, you know. She’s a menace.”

Merlin, how stupid the pair of them were. Draco laughed darkly and cradled her cheeks between his cold hands, wiping away the tears with the pad of his thumbs. “I detest that witch. It’s you I came for. It’s always you, Granger.”

A happy sob escaped her and she reached for his jacket to pull him closer. Around them, a slow snowfall began and she looked up at him like he belonged to her. “I can’t believe you didn’t know I invited you to come with me. Why else would I invite you to a Gryffindor Christmas party?”

Smirking, Draco dipped his mouth closer to hers. “I assumed just to torture me.”

She shrugged and melted into him. “That could have been part of it.”

Draco closed the infinitesimal space between them and for the first time, his lips pillowed hers. Despite the chill of December and the snow soaking their trousers, heat chased through his body, turning his vision crimson. Her tongue darted out, surprising him, as she ran it along the seam of his lips, begging for entry.

He opened freely, one hand sinking deeper into her curls while the other banded around her waist and pulled her tightly against him. He kissed her again and again and again until they were breathless and panting, their foreheads pressed together.

“Come on,” she breathed, threading their fingers together and pulling him along.

“What about the party?”

“I’ve had enough of the lot of them. I only planned this to get you to come with me, so my job is done. They can piss off.”

Draco laughed brightly and followed after the little witch. “You really are more Slytherin than you give yourself credit for, you know?”

She winked as they stopped at the Apparition point. “Yeah, I know.”

Thank you so much for reading! I hope you enjoyed it and Happy Holidays!