I Went Searching For Wings

Jared, a young American prince, journeys overseas in search of his soulmate: but in a land veiled in mystery and tragic secrets, will he recognise his true love when he finds them?

This is my first ever RPF! The prompt just screamed ‘dragon!Jensen’ and I love fairytales, so I decided to take the plunge. I intended it to be (relatively) short and sweet, but I should know my muse by now, especially when dragons are involved… So I’m sorry but it’s another long one, bringing in my third Reverse Bang where the story just grabbed the bit between its teeth and took off! (Apparently me + fantasy art = novella.) I have tried to keep it to bite-sized chapters of between 1000-2000 words for ease of reading, and I know many people prefer to download a long fic to enjoy at their leisure; but if you do, please consider coming back to leave kudos, so that I can know whether or not this foray from my usual canon-adjacent writing was a success!

Thank you to DWImpala67 for the beautiful, evocative art which so inspired me. She has done several pieces for this story, but I couldn’t showcase everything here, so please visit her site to admire and leave feedback! Also thanks to moth2fic for her up-to-the-line beta work, shadowhuntingdauntlessdemigod for a character read-through and helpful suggestions, and to all my friends for their encouragement and continued faith in my abilities as a writer. This wouldn’t exist without any of you and I hope that’s a good thing! 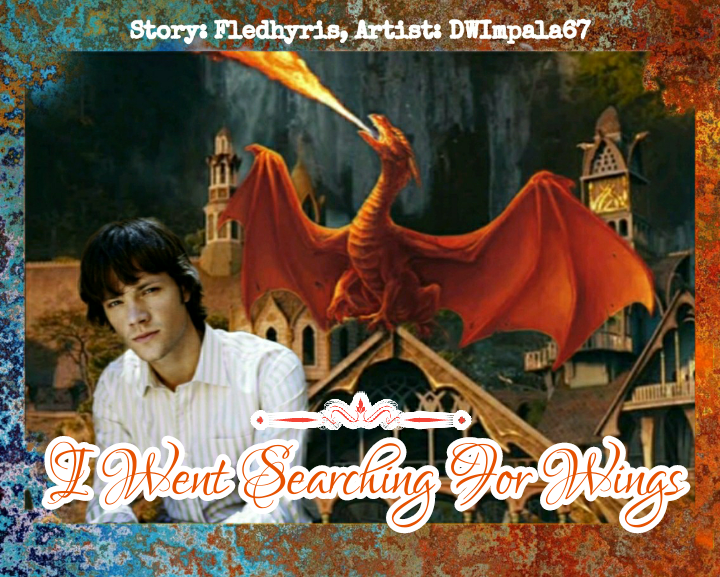 Once upon a time, there was a handsome young prince named Jared who lived in a beautiful white castle by the sea, in the westernmost reaches of the world. He was the youngest of four sons, and so he didn’t have much to do besides attending lots of publicity events, because he was the darling of the populace. He was tall and athletic, with tanned skin, a brilliant white smile, and waves of chestnut hair that everyone yearned for a glimpse of, but he kept it hidden from sight under his trademarked line of royal beanies. He was the favourite of his parents and his three brothers, too, and he could have been horribly spoiled; but what everyone loved about him most was his perpetually humble and sunny disposition. Jared was a prince of the people; he lived to please.

Jared’s older brothers were Michael, heir to the throne, very serious and a bit of a stickler for duty; Gabriel, who by contrast was a total hedonist, a ladies’ man and inveterate gambler; and Raphael who was a commander in the military. He was serving overseas to help keep the peace in the turbulent desert countries of the far east, so they didn’t see a lot of him. Jared’s official name, in keeping with the others’, was Jadriel; but he hated it, and who could blame him? So he went by Jared, and it served him very well.

Their parents were King Mark and Queen Ruth, who was a flame haired beauty from the Old Country, and suspected by many of dabbling in witchcraft; but of course only the white magicks of blessing and healing. A queen would never stoop to the practice of the dark arts; she had no need after all, she had everything she wanted. In public, the two were dignified and stately; in private, they had a bit of a tendency to squabble, but they had been married for a long time so it was only to be expected. All of them doted on Jared and coddled him, as much as he would let them.

Besides his many appearances as the promotional face of the royal family, Jared worked out a lot to keep fit; he loved to go running along the golden beaches with his retrievers, Jack and Jess; and he was surprisingly studious and well read. Everything seemed set for him to prosper, but for one thing: his family despaired of him ever finding a good match. As fourth in line to the throne, he didn’t really need to produce heirs, but still they wanted to see him settled and happy. They held balls and regattas and races and concerts in an effort to introduce him to all the eligible young noblewomen from far and wide, and all the glamorous celebrities and rich young politicians’ daughters.

Jared was unfailingly charming and polite to them all, but remained steadfastly disinterested. He could see that, objectively, they were all very beautiful, and he liked several of them well enough to become fast friends; but somehow, his feelings just didn’t seem to lie that way.

“When I marry,” he told his frustrated parents, “it will be to the one person in the world who is meant for me and me alone. I have to find my true soulmate.”

And with that they had to be content, for while he was a loving and dutiful son, Jared had a streak of obstinacy within him like a vein of obsidian, and once he had his mind set on something, there was no moving him. Not that it stopped them from trying, because like all families, they thought they had his best interests at heart. Although exactly what those interests were, differed slightly from one family member to another.

“Son,” rumbled his father, scratching his short, dark beard in perplexity, “when are you going to shift to make something of your life and move out of the castle? Of course we love having you here, but you’re a twenty-year-old living with his parents and it just doesn’t set a good example.”

“Och Jared, my wee moose,” his mother sighed in her quaint accent (which was actually put on a little to give herself airs, but nobody minded, as it was thrillingly exotic) “you know I only wish to see you happy, just as I am with your poor dear father. There has to be someone out there for you, if you’d only try and look a little harder! I just can’t bear the thought of you being lonely.”

“I know you’re last in line,” Michael exhorted him, sternly folding his arms, “but anything could happen, and it’s the duty of all royal successors to bear heirs to continue the family name. Look, we all know Gabe’s never going to settle down with a reputable partner, and Rafe - well, you never know what could happen to him out there, so after me that just leaves you. You have a responsibility to your country, as well as to your family.”

“Jare!” Gabriel gestured expansively, not quite sloshing the whiskey from the crystal tumbler in his hand. His cravat dangled loose over his open shirt, his voice was indistinct around the lollipop in his mouth (Jared suspected it had been dipped in something a lot stronger than the whiskey), and a pretty young socialite giggled and purred on his arm. “What’s the point in saving yourself for a mythical soulmate, when there are so many lovely ladies - and gentlemen,” he winked lasciviously, “lining up to offer whatever your heart desires? Live a little! You’re only young once, you know. Come on, and I’ll introduce you to some of my favourites.”

Even Raphael joined the entreaties, asking every time he got in touch over Zoom whether his little brother had found that special someone yet, to help ‘keep you out of trouble’. What trouble Rafe was alluding to, Jared was never sure. He simply smiled and nodded and set his teeth to all their well intentioned prodding, and stuck to his purpose.

He knew he would find his soulmate; he could feel it like a flame within his heart, a bright certainty that made all the searching and the worrying irrelevant.