One night on the surface, keeping watch over her sleeping friends, Wolf reflects on her feelings towards Kipo.

Recommended Song: The Light In Us All

It was a pleasantly warm evening. The campfire was burning low, the last embers crackling as they threw glowing sparks and wisps of smoke. The sound mingled with the quiet drone of multiple people snoring, providing a soft background noise to Wolf’s watch.

She was perched on a log at the edge of the campsite, keeping an eye out for whatever mutes might find them. This territory wasn’t particularly dangerous, of course, but she had learned the hard way that sleeping on the surface without some form of protection was a bad idea. Stalky rested in the crook of her elbow, ready in case of danger.

As she looked over the sleeping forms of her friends, she couldn’t help feeling a growing warmth inside. It wasn’t a feeling she had ever been used to; not since her so-called pack had shown their true colours. But spending time out here, with Benson and Dave and Mandu and above all else Kipo, she found she was feeling it more and more.

Kipo really was something special, Wolf thought, turning her gaze from the forest and down to where the girl was sleeping. Despite everything, she refused to let the harshness of the surface get to her. She kept that optimism, that infectious desire to make everything better for everyone. Once, Wolf would have called her naive, but the girl was a survivor and she knew it.

The feelings Wolf had for the older girl were complicated; Kipo called them sisters, but she wasn’t sure she agreed with that. To her a sister was someone you couldn’t trust, someone who might stab you in the back the moment it benefitted them, someone like Margot. But Wolf knew Kipo would never do that.

Even after Wolf had lied about her father’s letter, Kipo had forgiven her. Even after Wolf had run away due to Kipo’s true nature, she had been welcomed back with open arms and understanding. If Wolf was truly honest with herself, it was far more than she deserved. And yet she relished it.

It was hard to think about, when she didn’t like to remember her only other reference point, but Wolf was sure she had never had feelings quite like this before. She couldn’t say if they ran deeper than what she’d had before, not when her memories of her former pack were tainted as they were, but they were definitely different.

Part of her wanted to compare it to what she saw between Benson and Troy. The idea of ‘romance’ had never made much sense to her, and much of what those two got up to weirded her out. But at the same time she recognised the kind of closeness the two boys had, and if Wolf was truly honest with herself that was what she wanted with Kipo; just not quite in the same way as Benson and his boyfriend had it.

Wolf had thought about saying all this to the older girl already, more than once. But each time she reached the same conclusion; how could she expect Kipo to return her feelings if she didn’t even understand them herself? How could she ask for things to change and stay the same at the same time? If Kipo wanted to be sisters she could live with that, no matter how much it made her squirm inside. The thought of upsetting Kipo made her insides squirm much more.

Still, looking down again at where her friend was resting peacefully, just a few feet from where she sat, Wolf felt that old temptation rising again. A quick glance showed the others were still fast asleep, unable to overhear. Maybe if she couldn’t tell Kipo, Wolf thought, she could at least say her piece now.

“I love you, I guess,” she said quietly, looking over; Kipo didn’t stir. “But not the way that you love me. I don’t want to be sisters, cause that’s not what we are; you’re nothing like the wolves and that’s a good thing.” She took a deep breath, pulling in her arms around herself without thinking, Stalky falling softly to the floor.

“Travelling with you has been the best time of my life,” she admitted softly, words she would never be caught dead saying in the presence of others spilling out unbidden. “I know I don’t show it much, but every time we hug I feel all warm inside; every time we hang out like this I feel a little less alone. It’s like I want to be best friends, but somehow closer; I want to hold your hand and never let it go again.”

“I don’t even know if there’s a word for how I feel.” She felt a faint stinging in her eyes, and swallowed, one hand reaching up to fiddle with the clip in her hair. “And I hate how confusing it all is! But that’s the truth.” For a moment, the quiet of the campsite settled again, the crackle of the fire and the snoring of her friends, and she let out a long sigh. She didn’t really feel any better.

“Wolf?” a familiar voice broke through her introspection.

Wolf froze, her gaze snapping around to the source of the noise. She felt her blood turn to ice at the sight; Kipo wasn’t asleep. She was sitting up, pink eyes wide, surprise plastered all across her face.

“How much of that did you hear?” Wolf demanded.

“Uhh, all of it?” Kipo replied helplessly. Wolf’s grip on herself tightened; she turned away, unable to look at Kipo’s face any longer. A lump formed in her throat.

All she could think was that she had really done it this time; she knew she wouldn’t be kicked out of the group for something as stupid as this, but it was a small comfort. There was no way Kipo would ever be able to look at her the same. The careful balance of their relationship, whatever it was, had no doubt been shattered. All because Wolf hadn’t been able to keep her mouth shut.

She heard the soft padding of footsteps and suddenly a purple arm was draped over her shoulders, pulling her reassuringly against Kipo’s side. A glance showed the older girl was sitting beside her on the log, a look of concern on her face. Wolf winced, ready for the inevitable rejection.

“I’m sorry,” Kipo said softly. Wolf blinked; that wasn’t right. What did Kipo have to apologise for? She was the one with the dumb feelings.

“For what?” she couldn’t help asking. Kipo let out a quiet sigh.

“For not noticing you were hurting,” she said gently. “Of course me calling you my sister would make you uncomfortable after what happened with your pack. I should’ve noticed that at least.”

“It’s more than that,” Wolf cut her off, gritting her teeth. Kipo nodded.

“I know,” she admitted, “I heard, remember?” She paused, taking a breath, and suddenly Wolf was sure all over again that rejection was coming. She winced again, feeling the arm around her tighten in response. “The truth is, Wolf, I’m confused too.”

A moment of silence passed. Wolf let out a breath she hadn’t even realised she had been holding. Had Kipo really just said that? Gingerly looked up, meeting the older girl’s gaze again; Kipo had a small, uncertain smile on her face.

“I’ve never had siblings,” she admitted. “Back in the Burrow it was just me and Dad, so I’m not really the person to ask about this stuff. But I care about you a lot; what you said back there, about wanting to hold hands forever; that was a really good way of describing it.”

She paused, letting out a brief nervous giggle. “By the time I realised sisters wasn’t the right word, I didn’t want to say anything. Cause I thought you were happy with how we were, and I didn’t want to ruin things.”

For a moment Wolf didn’t, couldn’t respond. It was like her brain was stuck on repeat, one thought drowning out everything else. Kipo understood, and she felt the same. There was no way to put all of that into words, the joy, the understanding, the bare relief, so instead she reached out and pulled the older girl tightly into a hug.

She felt Kipo’s shirt growing damp against her face, and realised she was crying. Then she felt strong arms around her, soft and comforting; Kipo silently returned the hug. She didn’t need to say anything else to get her point across. For a moment they just stayed like that, in quiet comfort, until finally Wolf released her grip.

She pulled away, out of Kipo’s arms, wiping the dampness from her eyes with the back of one hand. As she did she felt fingers intertwine with her other, giving it a gentle squeeze.

“So, we’re… something?” Kipo broke the silence. “Uhh, platonic dating I guess?” Wolf suppressed a snicker.

“Something like that,” she agreed. She leaned over, slumping against Kipo’s side. She felt that warm feeling growing inside again, stronger than ever, and couldn’t help breaking into a rare smile. She squeezed Kipo’s hand, feeling her face heat up a little when she squeezed back.

“Wait, I know!” the older girl blurted out. “I have a friend, back at the Burrow, who knows all about this kind of stuff.”

“You do?” Wolf asked dubiously.

“Yeah,” Kipo reassured, smiling brightly. “Their name’s Asher. If we both feel the same way, then we can’t be the only ones, and if anyone knows more about it, Asher does; I’m sure they’ll know the right words. We could ask them about it next time we’re back!” As always, her enthusiasm was infectious. Wolf found a tiny smile creeping onto her face, despite her best efforts. She nodded.

This fic now has art thanks to my amazing friend, SoMajesticDonki!!! 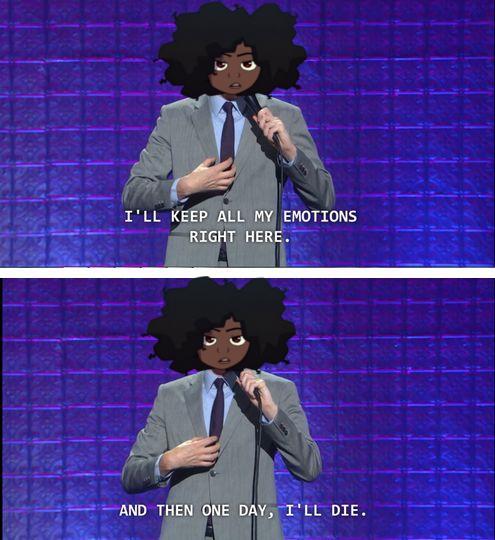 Also - nobody in any of my fics ever knows the word "queerplatonic" because it took me years to discover it and even longer to realise it applied to me and I like projecting >:3