Youtube-turned-mainstream rockstar Rey Johnson admitted to having a celebrity crush on A-list actor Ben Solo during a livestream just before her album's release. Ben's manager Hux finds out and shenanigans ensue as he and Rey's friends, try to subtly get them together with the help of social media.

Hello! This is the first time I've posted on AO3 and the first fan fiction I've written and posted in a long, long time. Please bear with me and do comment for suggestions and opinions. Thank you. 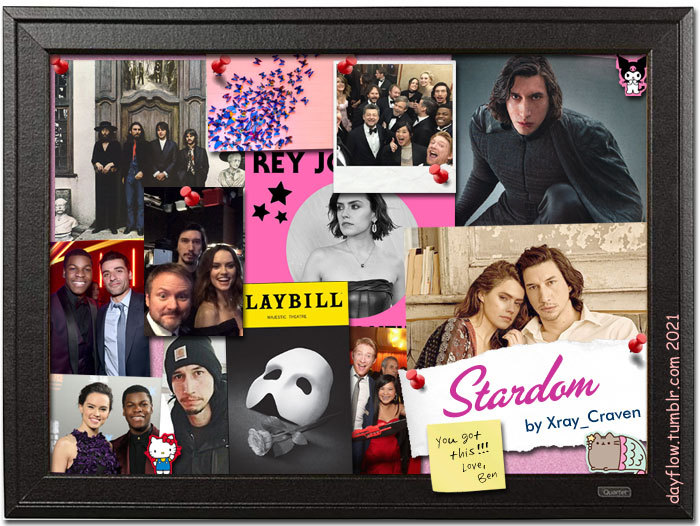 “Hey everyone, this is That British Girl, your Rey of Sunshine live to answer some of the questions you all have been asking.” Rey adjusted her laptop on the coffee table, “For those of you who’ve only heard of me now, I do do live shows every now and again to answer the most common questions you have.” The numbers on the screen ticked up and she smiled hugely at the first question that popped up on the screen.

She adjusted the pink cat-ear headphones on her head and cleared her throat, “Right then, what am I drinking right now?” She chuckled and looked into the giant cat mug she was holding, “Well it’s dead of winter and I hate the cold so I’m having Mexican Hot Chocolate. It’s my mum’s recipe,” She winked into the camera, “I’ll post it on my social media accounts right after this livestream.”

More questions popped up as she sipped from her mug. Nights like these she missed her mum. She had been old when she’d adopted Rey after she had been left bouncing from one foster home to another and she tried her best raising the preteen nobody seemed to want.

“Yes, my mum was a lovely lady. She died right after I graduated high school,” She smiled at the influx of condolences and moved on to other, more mundane questions about life and work and school. She was a YouTube musician, not quite a rockstar yet, but gaining more mainstream popularity.

“Do I have a celebrity crush?” She laughed, “I think I get that question quite often these days. Do I really look that lonely?” She took a long drink, savouring the earthy, spicy taste of cinnamon and chipotle and sighed, “Well, I do have one.” She laughed when the comments was flooded with questions and guesses, “I do believe you all know who he is, he starred in a sci-fi trilogy not too long ago.” She laughed again, “Yes, yes, it’s most definitely Ben Solo.”

More questions popped up and she took the time to formulate her answer, “Why? I mean, you’ve seen him. He’s not conventionally handsome but he looks nice and has that dimple and he has that intensity,” She bit her lip and shrugged, “I guess I have a thing for big, broody men.” She laughed again, “And I mean, have you all heard him? I don’t know, I might have a voice kink.” More comments about her choice of word, “No, I don’t mean what’s in his pants,” She laughed and felt heat suffuse her cheeks. She wasn’t sure if it was the spice in her chocolate or embarrassment.

“Well, I wouldn’t know about that,” She answered a comment about how he would probably be big all over, “I mean, I don’t think I’ll ever meet him. Not that I do want to, I’ll probably embarrass myself.” She laughed again, “I’m such an awkward bean in real life what more to my celebrity crush, right? Plus he’s older and had like a string of model girlfriends who are like, a head taller than me. Me? I’m just a YouTuber, we have totally different circles.”

“Oh but do definitely watch the new movie. Personally I love and hate it at the same time,” She sighed, “I don’t know but I do really ship the two characters and I don’t want to spoil so you guys watch it yourselves,” She laughed again, “I know I’m just biased.”

For the next half-hour she answered some more questions about her life and the album she’s been working on for the past year and a half with her manager.

“It looks like our time’s up you guys! Stay tuned for more details about the release and I have a gig on Saturday at the Cantina. I hope to see some of you there. Til next time!”

She ended the livestream and closed her eyes before pulling off her headphones. The apartment was suddenly so quiet. She sat there, her back resting on the soft pink sofa, and wished she didn’t feel so alone.

“Guess what,” Hux had always been chipper in the mornings. Ben sighed and rubbed his eyes, wondering why his childhood friend and manager was wandering around in his condo at seven in the morning.

“What?” Ben sighed again and yawned, pushing his long, unruly hair from his face. He dragged himself out of bed and stumbled into the kitchen where his coffee machine was already bubbling away. Thank fuck he remembered to set the timer.

“You're trending on Twitter.” He never got rid of his thick British accent even though he moved to the States at such a young age. He was bullied in school for both his hair and that accent. That was how Ben had met him. Ben didn’t like bullies and he had been big for his age.

“What did I do this time?” Ben sighed, already feeling so tired. Or was it that he’s always tired? He got his cup of coffee and offered Hux one too. The redhead shook his head.

“I know, and the studio called and said that there’s a sudden surge of interest in your movie in the last twenty-four hours from a demography we didn’t expect.”

“Oh?” He tried to sound interested, he really did, but his acting skills were pretty much limited to the studio and definitely not this early in the morning.

Hux didn’t seem to mind, “It’s because of That British Girl.”

“What British girl?” Ben raked his mind trying to remember if he met a British girl recently and coming out blank.

Hux chuckled, “No, you big lug, That British Girl.” He laughed harder upon seeing Ben’s blank expression, “She’s an up-and-coming rockstar type on YouTube. I hear Resistance had signed her on.” He eyed his friend who stared into his coffee, black, of course, with a deceptively blank face.

Hux cleared his throat and pulled out his phone, “Anyway, Rose loves her.” He opened up the recording of the livestream and Ben was struck by the husky laugh that came from it.

“…most definitely Ben Solo,” Her accent was so very similar to Hux’s but not, and it sent shivers down his spine.

“The comments on this are hilarious.” Hux chuckled, “People are wondering what you’re hiding in your pants.”

Ben rolled his eyes, “Ever wonder if maybe she’s using my name to promote herself?”

“You’re trending, not her.” Hux said and went around the counter so he can lean against it, next to Ben, “I mean look at her, do you think she can do something like that?”

Ben looked at the girl with the cat ears and frowned, no, she didn’t look like the kind who could use someone else to boost her popularity, “She doesn’t look like the type Resistance signs on.” She looked…cozy. The oversized sweater she wore was falling off one  tanned shoulder and it looked as though she was sitting on the floor. She laughed again and his frown deepened. She was cute, that was for damn sure.

“She’s like those Baby Metal types,” He arched a brow at Hux, “You know, Baby Metal, they toured with Judas Priest.” Hux snorted back a laugh at Ben’s blank stare, “The fuck, Solo. What rock have you been living under?” He shook his head, “Anyway, you’re the one trending right now because of her. Her fans are the ones supporting you right now. The press might ask you about it later so I suggest you look her up,”

Ben scowled. He forgot about the press junket, “You seem to know a lot about this girl,”

“Of course. You’re suddenly trending and it’s my job to find out why. Aside from Phas has been blowing up my phone since four in the morning. She thinks it’s a good idea for your to go and meet this girl. She has a performance at the Cantina this Saturday; Rose wants to go so I’m taking her. You should come with.”

Ben shook his head, “No thanks. I have no interest in meeting fans.”

“Come on, Solo. We can just hang out, you know, have a drink. When was the last time we hung out?”

Hux sighed and shook his head, “Well anyway, you should get ready for the junket, yeah?” He nodded and Hux closed the app and pocketed his phone, “Don’t say anything stupid.”

“I can’t promise that.” He smirked and Hux rolled his eyes, “Gotta make sure my manager works hard,”

“Why are we even friends?” The redhead sighed and shook his head.