This Christmas, Merlin knew, was going to be special.

This Christmas, Merlin knew, was going to be special.

There were lots of reasons. One, and it was the main one, was that he had Arthur. Admittedly Arthur had been around last Christmas too, but their relationship had been very new then and anyway they’d had to spend Christmas Day with Arthur’s father. Uther Pendragon had made his disapproval of Merlin quite obvious, and although things had improved very slightly during the course of the past year, Merlin was grateful that Arthur wasn’t going to make him go through that again this year. Not until the day after Boxing Day, and that wasn’t proper Christmas anyway.

And that led on to reason number two. They were going to Merlin’s mother’s house for Christmas, which meant a huge home-cooked Christmas dinner, relaxing by the fire, sleeping in his old room and coming downstairs in the morning to open presents in their pyjamas and eat fresh mince pies and hot bacon sandwiches, and never mind if they got greasy fingers on everything because Hunith wouldn’t care about that.

And reason number three was that they were driving down on Christmas Eve, with all the presents in the boot, just the two of them for the four hour drive to the middle of Wales, stopping off at services along the way for gingerbread lattes or cinnamon lattes or whatever the coffee chains were selling. All that time having Arthur to himself, not being distracted by work or family or anything else was going to be wonderful.

He could hardly wait.

The road trip was everything Merlin hoped for, even the traffic jams around the M32 and M5 junctions weren’t as bad as Arthur had feared. Hunith had really pulled the boat out with the decorations, even having a giant inflatable snowman in the front garden, and garishly tacky lights all over the front of the house. It was perfect.

Arthur seemed to be spending far too much time in the kitchen with Hunith on Christmas Eve, supposedly helping with the dinner but Merlin didn’t think that sounded very likely as Arthur could barely manage to boil an egg. Whatever it was, they were as thick as thieves and constantly whispering together. Merlin supposed he’d find out whatever it was in due course. He hoped it didn’t involve Arthur getting to see his childhood photos. Arthur would have far too much fun teasing him over some of those.

He didn’t find out what it was. But his mother kept smiling at Arthur fondly, and dishing out extra helpings of pre-Christmas dinner for him. Honestly, Merlin thought, it was almost as if Arthur were the returning son and not Merlin. She’d probably be knitting him Christmas jumpers next. Arthur, naturally, was absolutely lapping it up. Still, he’d never known his mother, and Hunith had more than enough love to go around so Merlin just let him enjoy it and tried not to feel left out.

Or, early anyway. It was pitch black in the bedroom. Merlin thought for a moment that he’d woken up ridiculously early and that he was going to get mercilessly teased by Arthur for getting overly excited about Christmas and Santa like some little kid. And then he realised that there was something tied around his head, covering his eyes. He reached up to push it away, but Arthur stopped him.

Merlin couldn’t smell breakfast cooking, and supposed that if his mother wasn’t yet up then it must still be very early. So the surprise was going to involve staying in their nice warm bed and some early Christmas cheer. He hoped his rickety old bed could stand it.

Arthur laughed, which Merlin thought was a bit much when he probably wasn’t even going to be allowed to so much as hold Arthur’s hand when they visited Uther in a few days… No, he wasn’t going to think about visiting Uther. That would spoil Christmas. He lay back, waiting for his ‘surprise’, but was disappointed.

Merlin reached up for the blindfold again, but Arthur batted his hand away.

Arthur helped him get up, then led him across the room to the door. He stubbed his toe on the way, cursed Arthur under his breath, and waited. Whatever this surprise was, it had better be good.

Hunith’s cottage was quite old and the staircase fairly creaky. It was also difficult to manoeuvre when you couldn’t see where you were putting your feet.

“If I fall and break my neck, I’ll come back and haunt you!” Merlin warned. He heard Arthur chuckle at that, but he also felt his lover’s grip on him tighten just a little.

“So where are we going?” Merlin attempted. It was a strange feeling, carefully walking through the house in a blindfold. He knew the place well, he’d grown up there after all, but still everything felt different with the temporary loss of a vital sense. He could smell the cinnamon and orange of the potpourri that his mother had put out. It always made the house smell like Christmas.

“Ooh, is Santa there with presents? Can I sit on his lap?”

He didn’t need to be able to see to know that Arthur was rolling his eyes.

“No… but you can sit on mine later if you’re good!”

It was warmer in the lounge. Toasty, in fact.

“Shush. She’s waiting until I call her,” Arthur told him, leading him across the room.

“She knows about this?”

“Oh yes, she helped me set it up. She’s very excited. Okay, stop there. You can take the blindfold off now, and look straight ahead,” Arthur told him.

Merlin knew they were near the tree, he could smell the pine fragrance. That was in front of the window, so perhaps it was something outside. Arthur was rich, and ridiculously generous, and Merlin wouldn’t put it past him to have bought a car or something equally obscenely over the top. He took the blindfold off, blinking in the bright winter sunlight that was streaming in through the window. And looked.

There were four little decorations that definitely hadn’t been on the tree last night. Four small red hearts, each with a single word. Will. You. Marry. Me?

When he looked at Arthur, his boyfriend was down on one knee, holding out a ring and gazing up at him, his face a mixture of hope and nervousness. Merlin didn’t think he’d ever seen Arthur nervous before. He nodded, biting his lip as Arthur slid the ring on his finger. It was a perfect fit.

And as Arthur took him in his arms and kissed him, Merlin knew that this Christmas was going to be the very best one ever. 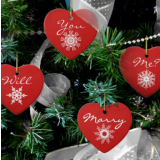