Days of Our Lives

Disagreements about food and car washes.

Starsky lived to torture Hutch; not in a physical sense, but mentally, emotionally, and verbally. Hutch just fell for all Starsky-tricks, even if it was an exact repeat of one he got caught in just the day before. Why and how it happened, Hutch never understood. He had given up on trying to figure out his partner a long time ago. Hell! He had to stop getting trapped in his partner's schemes as well.

To make things worse, Sandy, a girl from some exotic Island had moved in next to Starsky's apartment. She was bad news, Hutch could tell. Just as Hutch was getting some sense into his partner, and getting him to eat some healthy foods… that damn girl spoiled everything. She was addicted to Mama Jane's pizza just Like Starsky, and talked about nothing but Sports cars. And just the other day she had invited Starsky to share a meatloaf she had bought from some store. Starsky's excuse to eat that? He said it's from a wholefoods store! Like that'd change what's in meatloaf!

That friend of Sandy, Duni, from Duluth, was way more sensible. She drove an old LTD just like Hutch did and prepared a health shake just the way it's supposed to be done, with flax seeds, fresh fruit, yogurt and all. Hutch knew because he had visited her a few times. She even had her own organic vegetable garden, all devoid of chemicals. She stayed away from preservative-filled crap. But then… Starsky and Sandy got Duni addicted to Mama Jane's pizza as well! To make things worse… Hutch started developing a liking to pizza, too, Damn it! Why can't these people live on water?

S: You should try the cornbread with peanut butter, Hutch, it's the best! I can eat this for lunch, breakfast and dinner.

So… of course, Hutch had to try it, but he didn't like it a bit.

H: I can't even feel the taste of cornbread. I'll stick to honey, butter and milk.

S: Milk? On cornbread? Are you nuts? Wedakma Nah!

What in the world was Starsky saying?

H: It's just peanut butter, for crying out loud! Put milk on it and you have Johnnycake.

H: Hey- Johnnycake was a staple for the settlers.

S: Why on earth would anyone want to put 'milk' on cornbread, huh? It's going to make it soggy. It's not cornbread anymore. It becomes… becomes… cornmeal soup- broth- gravy- whatever that is NOT cornbread! Makes no sense.

S: Is that supposed to explain whatever you are doing to the poor bread?

Hutch was beyond exasperated.

H: That's what people did to add nutrients to the cornbread to survive!

S: Why didn't they just drink the milk?

Hutch yelled and stormed out.

Starsky knocks on the door and enters.

H: Where the heck have you been all day?

S: Running errands, and just got my car washed. She's all clean and happy now.

H: And now is he all tucked in and asleep? Did you read him a bedtime story, too?"

H: What does you being gay or straight has to do with your car being a he or a she?

S: You are the brans in this partnership. Go figure!

H: Why couldn't you wash it by yourself, huh? Why harm the environment?

It's not like Starsky didn't like to put up a good show while washing his car in his driveway, wearing nothing but a skin tight, and butt hugging pair of shorts that cannot be trimmed any shorter.

S: I think it just saves a whole lott'a water and my time.

S: As an example- these are power washes so they really don't need that much of water.

H: Less water? Compared to what? Park the car outside in rain and you are not wasting water or your time or-

S: You know, Hutch? I never thought you were this lazy! And that heap'o junk of yours is a chemical hazard waiting to happen!

H: You just had a splash of mud on your striped Tomato, so now we have 45 less gallons of good water mixing with chemicals and biohazards going straight to our water ways with absolutely no filtration- Not to mention the soap used on the 'said' car. And electricity to dry, heat building to keep things going, powering the equipment…

S: So… you never use soap or a washing machine to wash your clothes… or use a dryer to dry them?

Starsky had a fierce glint in his eyes.

S: And how about when someone go lean against your muddy, dirty, greasy car and get all that on their clothes- They'd have to wash them multiple times to get all that dirt out. Talk about saving the environment!

Starsky was way beyond angry.

H: That's not the problem!

S: No? If you want to save the environment, stop driving that thing altogether. Just walk to work every day. You'll be doin' all of us a big favor! The smoke coming outta it is hundred-times more than of my Torino. You are tellin' me about saving the environment, huh?

H: That's not what we were talking about!

S: And the freakin' thing's horn blasts every time you open the fucking door. Talk about sound pollution.

H: That's NOT the point!

S: You know what you can do with your points? (Starsky yelled and stormed out.)

Jeez! The man was just too sensitive when it came to his car!

Well… Hutch may have just gone a bit too far in insulting the Torino. But, damn it, Starsky pampered and treated that car a bit too much. Who the hell needs to wash a car every week and wax it every month?

Hutch opens his laundry room to do his dirty laundry, and gasps! His washer and dryer were chained up and locked with a huge padlock.

Hutch was going to strangle his partner! 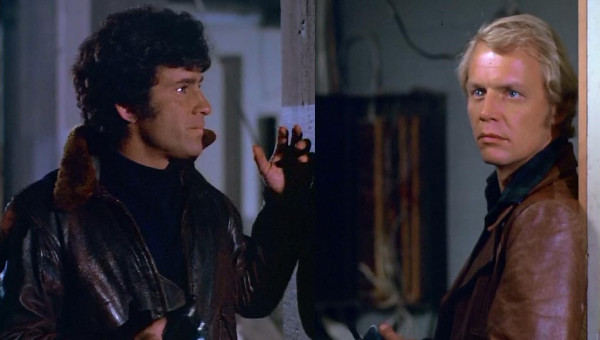 5 guests left kudos on this work!