Jimin is an omega that is, by all accounts, tired of alphas in the pack. He’s past the normal fresh age of finding a mate to settle down with. But what’s more frustrating is that there’s not one interesting wolf that can keep his attention long enough.
Jungkook is the youngest son to the head alpha, who - by all accounts - wants nothing to do with mates. His focus should be on preparing to take care of the pack, and becoming a good huntsman.
Head Alpha Jeon puts pressure on them both to find their mates soon, for the better of the pack. At the beginning of the courting season Jungkook brings back his kill from the annual hunt but makes a point of not presenting it to any omega. He gets an earful from his father in front of the entire pack, until Park Jimin steps in. 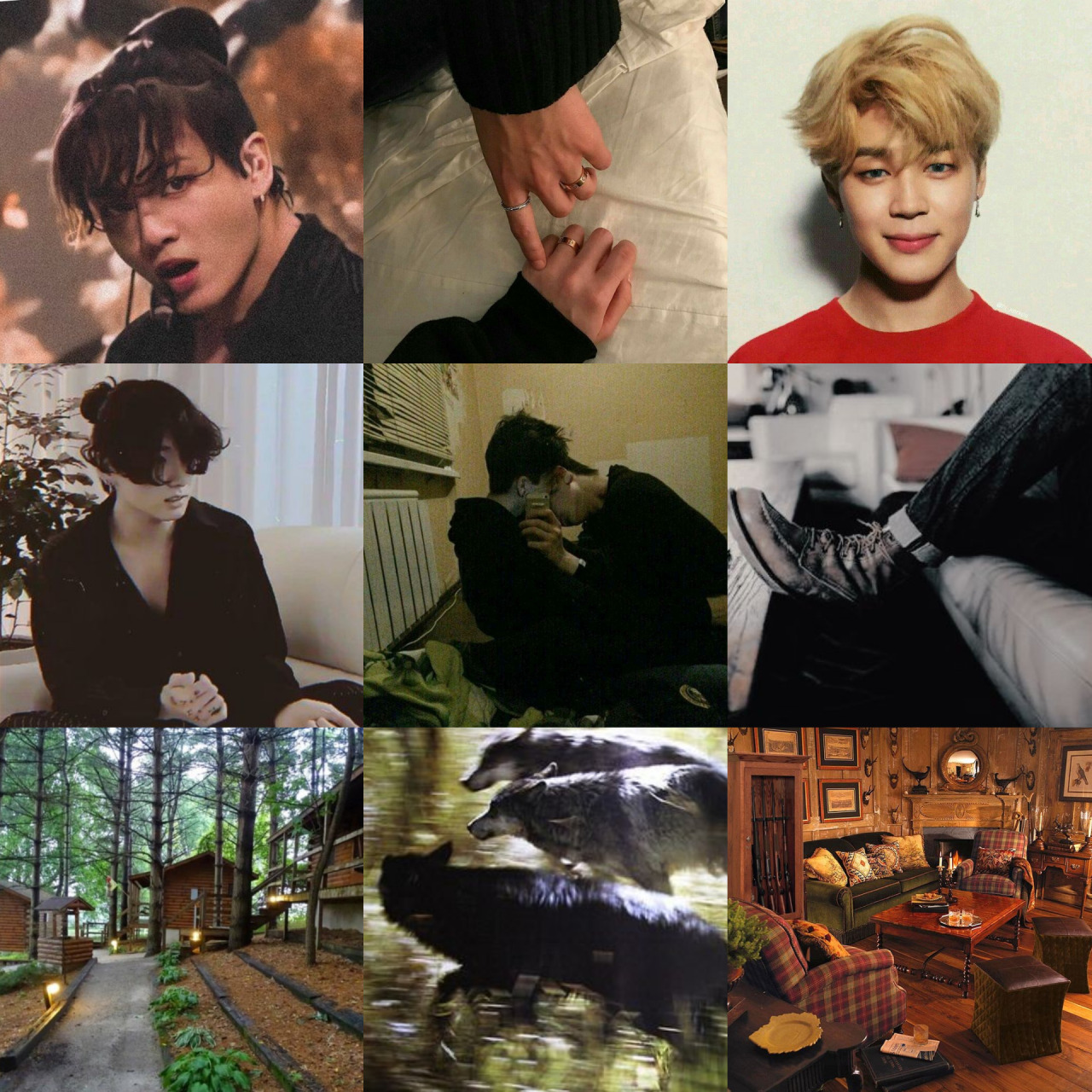 The Jeon Pack sits on a mountain peak, warmed by the sun shining right above them, and cooled by a constant soft breeze flowing by. There are many in the pack, more than others. Most packs are travelers that shack up together in tents. The Jeon pack never moves, it’s where every family has their cabin built to be passed down generations.

Park Jimin shares a cabin with his found family, Kim Taehyung. At least he did for now, until Tae’s chosen alpha decides it’s time to invite Tae to his family cabin to start their life together.

“Did you go out last night?” Tae asks.

Jimin looks up from the book in his lap to Taehyung leaning against the doorway of their living room.

“For a second, to go see the full moon.”

Tae sighs, “Bogum and Namjoon saw you out there at midnight, what if Alpha Jeon saw you by yourself?”

Jimin’s gaze drops down to his book, “the Alpha wouldn’t be up that late, and I knew Namjoon was out too, so what did I have to worry about?”

“When word gets around to the pack alphas that you’re out exploring at night, they’re not going to think it’s for sweet, innocent reasons.”

Taehyung rolls his eyes, shoving his hands in his pockets before jumping onto the couch and laying back on his friend with a groan. The book falls out of Jimin’s lap, but the blonde can’t help but smile before petting Tae’s head.

His expression drops slightly when Tae turns his head away. Jimin wouldn’t tell him he goes out nearly every night lately. Out at night, in the cold, Jimin wasn’t comfortable enough to think.

Because all he thinks about lately is a ticking clock.

Jeon Jungkook’s cabin was 50 feet away from Jimin’s. It was isolated from the other cabins lined up around the campsite, purposely surrounded by the trees of the forest. He was the only Jeon child to build his own cabin. At 17, on his coming of age night, he started the beginnings of construction and got it done before the second winter. That was 3 years ago.

He’s twenty now. When he turned twenty, with his own house, and his own responsibilities in the pack, he thought his life would now be his own. But there was no getting around an overbearing omega mother.

“I brought seasoning.” she doesn’t wait for a response, pushing by her son to get in his home.

He silently shuts the door behind her with a blank face. She sets a bowl of ground herbs down onto his kitchen table, glancing around the room.

“Still no decorations? I know you’re no omega, but you’re not animal, this isn’t a cave-”

He lets her talk while he grabs a skinny jar from under the sink, and pours the bowl of spice into it. A frown curves down on his lips as the last bit spills out to dust the floor. Jungkook pushes the empty bowl back over to her and screws a cap on the jar, setting it up in a cabinet with his other food.

He clasps his hands behind his back and turns back to her, “thank you for my seasoning.”

She cuts her complaining off to look at him, “you’re welcome.”

Jungkook nods, biting down on the insides of his mouth as she sits down at the kitchen table and relaxes in the seat.

She glances at him and purses her lips, “and you should get a haircut.”

“My hair is the length I want it, thank you.” he bows his head slightly before meeting her eyes again.

His mom scoffs, “you want to be a hunter, and yet your bangs touch under your eyes.”

“No longer than my ears.”

“It’s long enough to put in a bun, Jungkook!”

She gestures overdramatically to his hair that he had previously tied the back of up. He blinks back at her with a straight face.

She shakes her head back at him, “I came to check in on you too.”

“I wanted to make sure you’re all prepared for tomorrow.”

His expression hardens slightly, “you did…or father did?”

“We both did.” she says dryly.

“Maybe you should be worrying about Namjoon, he has more at stake obviously.”

Namjoon, first born alpha son to the Alpha Jeon. Followed quickly after by the omega Yeri, and lastly the youngest alpha, Jungkook.

Tomorrow is the day Namjoon and Jungkook both, along with the other of age, unmated alphas, are to bring back their hunts to present to the omega in the pack they wish to court. It was a celebrated day. Jungkook’s teeth grind together.

His mother looks unphased by his comment, “Namjoon also has the stress of the pack on his back, and he’s already expressed interest in an omega.”

“Just because you don’t see it, doesn’t mean I don’t have an omega in mind.”

He casts his gaze away to the kitchen sink.

Jungkook did not have an omega in mind. He couldn’t name half of the pack’s omegas anyway, because he didn’t care . Alphas out here have two priorities: protecting the pack, and making their family.

Jungkook grew up in a family, one that criticized his every movement since birth. He had no desire to start a family with a random omega that he, at the very least, found attractive, but had no other connection to.

All Jungkook wants to do is hunt for the pack, guard the pack, and be left alone.

“Then your father and I will be looking forward to officially meeting them come tomorrow afternoon.”

She leaves after that, of course, that’s the only reason she stopped by.

Jungkook’s shoulders deflate when the sound of the door closes with the click of the lock. He glances down to the bowl and flicks it off the table to tumble down onto the ground.

It didn’t matter how much he did for the pack, the only true thing his parents seemed to care about was continuing the Jeon line. Otherwise, he was of no use to them, and no different than any other average alpha in the pack.