The Pursuit of Happiness

Tianying and Luo Fusheng are happy together.

This story is a fusion between a Bai Yu photoshoot and Dreamlike Life.

Regarding Dreamlike canon, it goes AU from episode 27. Xu Xingcheng is either less of an asshole or busier than in canon - he doesn’t bully Tianying out of her job at the flower shop, and the falling out between Luo Fusheng and his family doesn’t happen, either, so he stays on as the second-in-command of the Hong family. Xu Xingcheng does not appear in this story at all.

Visuals of Bai Yu as a mechanic (which inspired this whole story in the first place) : image gallery

Special thanks to naye for brainstorming this story with me over a year ago and making most of the plot happen. Thanks also to my friend neery, who insisted on some things that made the story a lot better. <3 I couldn't have done it without you two! 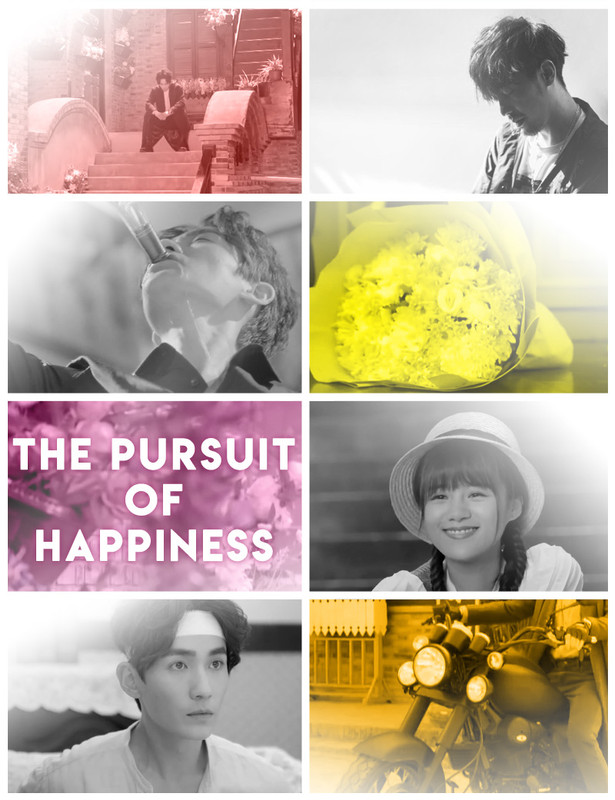 Bai Yu is on his way to a customer to return a fixed motorcycle when he sees Luo Fusheng sit on the stairs outside Duan Tianying’s apartment, wringing his hands. Bai Yu doesn’t bother waving, and it’s too late at night to honk, but he has a feeling Luo Fusheng wouldn’t have noticed him either way. He looks sad and lost in his thoughts.

He’s not sure how well his presence would be received after Luo Fusheng left him, anyway. But he can’t help his thoughts circling around Luo Fusheng all the way to the customer’s house.

When Bai Yu comes back the same way on foot an hour later, Luo Fusheng is still there, and he looks even more depressed now than before, cradling his head in his hands.

Bai Yu throws caution to the wind and walks up the stairs. When Luo Fusheng lifts his head and focuses on him with bloodshot eyes, he slows down, projecting harmlessness.

Has he been drinking? Bai Yu carefully sits down next to him. He doesn’t smell of liquor. Bai Yu puts his arm around his shoulders and warmth spreads through his limbs at the thought that Luo Fusheng allows himself to be held for once.

The first time Bai Yu met Luo Fusheng was when he brought his bike to Bai Yu’s shop. He was strutting around all cool and fierce, as if Bai Yu didn’t know about his family’s reputation.

Bai Yu let him do his spiel and just did his job.

Apparently that was enough, because Luo Fusheng kept bringing his bike to him for repairs. At first he brought his friend, Xu Xingcheng, and Bai Yu did both their bikes, but after a while, Xu Xingcheng didn’t show up anymore. Bai Yu didn’t mind. In fact, he liked being alone with Luo Fusheng. Because sometimes, when nobody else was around, Luo Fusheng didn’t bother pretending to be a badass.

Bai Yu doesn’t remember how it happened, exactly, but one day there was a vibe around Luo Fusheng that made Bai Yu’s skin prickle. He seemed lonely, and Bai Yu could practically feel the nervous energy thrumming through him. They were walking around each other in his small garage, Bai Yu trying to figure out what was wrong with the bike’s brakes, and Luo Fusheng being in the way.

Suddenly they were standing too close, Luo Fusheng’s Adam’s apple bobbing, his tan coat almost enveloping Bai Yu, creating a bubble around them that shut out the world. No words were needed, a light touch on Luo Fusheng’s throat, frantic kisses, suppressed moans that set Bai Yu’s spine on fire. A hard cock against his, Luo Fusheng reacting in just the right way when Bai Yu grabbed his ass, sweat running down his throat when Bai Yu pulled him into a dark corner of the shop and pushed him up against the wall.

For a whole week, he thought he might get killed for fucking the Hong family’s second-in-command. He was so relieved when Luo Fusheng came back, with his doe eyes and soft smile, that he almost whispered something romantic in his ear.

Bai Yu vividly remembers one time where he let down the rolling shutters of his garage in the middle of the workday. He remembers the beautiful line of Luo Fusheng’s waist in the dim light filtering through the grimy window, and how his groans echoed off the metal with every thrust.

They never talked much, but Luo Fusheng always came back for more, and Bai Yu treasured every look, every smile, every time he managed to get a glimpse of the real Luo Fusheng underneath the bravado.

He thought they had something special.

Luo Fusheng stopped coming by when Tianying and her theatre troupe appeared in Dong Jiang. Bai Yu berated himself for his foolish hopes. Of course he’d leave him for a girl. Of course. He should have known.

He still had to repair his bike, but it was always Luo Fusheng’s brother, Luo Cheng, who brought and collected it. Bai Yu made sure never to charge even a single yuan too much.

Now they’re sitting here, outside of Tianying’s apartment, and Luo Fusheng has only uttered a few terse words about having to protect her. It doesn’t sound like he’s her boyfriend, would he be sitting out here if he was?

Luo Fusheng sobs and leans his head on Bai Yu’s shoulder. Bai Yu’s heart clenches for Luo Fusheng, but he can’t help it when that same knowledge makes the selfish part of him dance with joy.

She doesn’t want him.

“I’m so sorry,” he whispers into Luo Fusheng’s ear, and Luo Fusheng lets him hold him close and rub his back and wipe away his tears until the sun rises in the morning and Bai Yu has to let him slide out of his embrace so he can go do whatever he does during the day and Bai Yu can go open up his shop.

Of course it was too good to be true, because two weeks later, he hears through the grapevine that Tianying accepts Luo Fusheng after all and that they’re moving in together.