When it becomes obvious that Hermione needs help, Crookshanks takes matters into his own paws. 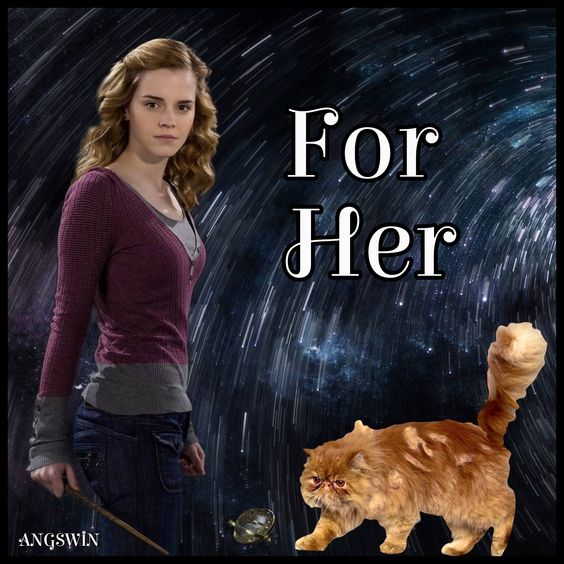 She hadn't been - not since she had left him with the Ginger Ones and disappeared for such a long time.  When she finally returned, she was scarred and broken…without those two males who were with her so much before.

She was back at the castle now, surrounded by the books and activities that she had once enjoyed.  However, she still often cried so hard that even the considerable power of his purrs as he kneaded her lovingly with his paws couldn't help.

“Oh, Harry!” she whispered instead as Crookshanks felt the fat drops of wetness that rolled down her face fall onto his thick fur.  “Ron,” she sighed sorrowfully .

Crookshanks knew that something needed to be done.  She-Of-The-Wild-Mane-But-With-Gentle-Hands-And-Soft-Voice had once saved him from a lifetime of loneliness.  Therefore, he needed to repay the favor.

Thankfully, he remembered the device his human utilized to help that night when the Dog-Who-Was-Not-A-Dog and the Rat-Who-Was-Not-A-Rat were at the castle with the Man-Who-Was-Also-A-Wolf.

He even knew where it was.  The Cat-Who-Was-Not-A-Cat had locked it away and promptly forgot it...as he noticed humans often did in their advanced years.

Fortunately, locks were no barriers against those of superior intelligence and magical Kneazle heritage.

Hermione gazed in disbelief at the familiar object her clever feline had just dropped at her feet.

“B...But," she stammered.  "I returned that years ago! Where in Merlin's name did you find it?”

Crookshanks just meowed reassuringly and wrapped his tail firmly around his human’s leg so she wouldn't leave him behind again. Then he focused all of his innate magical abilities and crushed the delicate instrument beneath his paw.

As they were suddenly jerked backwards in Time together, Crookshanks vowed that, this time around, things would be different for her!