Thermite's team was about to parachute near a White Mask hideout when their plane gets shot down.
They all managed to leave it before the explosion, but Thermite got severely injured while saving Ace.

Video that inspired me for the opening scene:
https://www.youtube.com/watch?v=7p6hqMnsLFY

Urgh I'm sorry this fic is so late for the Flora prompt. I wrote 5 other fanfics and wasn't happy w/them.
Here is the "less bad" one, though I'm sorry for any major medical or parachute inaccuracy + any mistake / weird phrasing.
+ Now featuring an absolutely wonderful fanart by @WoodyWilllson

If they hadn’t already jumped, everybody was shaken off the plane through the opening. When the missile reached it, Jordan was practically blown and expelled far away. He was now in free fall, the ground getting closer at an alarming speed. He tried to first move his body into an X position, and tried to locate everyone before opening his parachute:

Everybody had fortunately already equipped their parachutes, and everyone seemed alright and conscious… everyone except Ace.

Where was he…? Jordan gently moved from several lateral degrees and saw him. But there was something wrong: Ace had his back to the ground and had his legs tangled with a prematurely and badly opened parachute… and he was starting to spin.

Jordan didn’t think twice and leaned his arm along his body to orientate his fall towards Ace. With the speed, he almost collided with him and managed to immediately break his spin. He helped Ace untangle his right leg and when it was enough, he unstrapped his parachute. He then helped him to turn on his front and pulled his emergency chute, thus immediately breaking Ace’s fall, the mind blowing and safely taking him away.

And that’s when Thermite realized he was much lower than what he had expected, he located his ideal emergency landing spot; a small clearing in the forest down there, and quickly pulled his chute out, the violent break almost taking his breath away. He tried to quickly take a glance at the others but then the wind blew some more and violently pushed him away, which made him gain a lot of horizontal speed. Too much horizontal speed.

He saw the tall trees getting closer at an alarming speed, and started to brace himself for the incoming collision.

He almost didn’t feel it, because he blacked out right when it hit him.

Ace was totally freaked out because he had seen it. How Jordan had collided with the tree, his chute tangling and tearing in the branches.

Ace managed to reach for the clearing which Jordan had tried to land on, had the wind not decided to violently push him away. But then again, had Jordan not saved him and had he pulled his parachute sooner, he wouldn’t have crashed with such a high speed. Once he had got rid of his own parachute, Ace had rushed on shaky legs till he reached Jordan’s crashing area and that’s how he found him.

Jordan was tangled in vines, branches and various flora, the ropes from his chute keeping him hanging barely a meter off the ground.

“Hey Jordan?! Jordan!” Ace rushed and cut the rope with his army knife, Jordan’s body stiffly falling in his arms.

Ace kneeled and gently lied Jordan on his side, assessing the damage. Jordan was bleeding from the head and the mouth and one of his wrists was twisted in a bad way, while one of his legs definitely seemed broken. But fortunately, he was still breathing and the blood from his mouth seemed to come from a broken tooth rather than a punctured lung. Ace tapped Jordan’s shoulder:

Seeing that he had no reaction, he grabbed his uninjured hand and repeated:

“Jordan if you can hear me, squeeze my hand.”

But still no reaction. He wondered how much damage his head had taken; did he have a concussion? Well, from the look of his collision, probably.
Ace heard his radio crackle:

“We are gathering at Echo Point 7. Can you head for this position? over.”

“I think I may but I’ve got Thermite… He’s badly wounded. I’ll have to carry him, over.”

There was a silence, then Ash’s voice replied:

“Ok, stay in your area, shelter and send me the exact coordinates. We will come to find you with the rescue team, over.”

Ace sighed and wiped his eyebrows. He glanced at Thermite’s motionless form and his heart pinched.

“That’s gonna be okay, sweetie pie” he murmured, more to himself.

After checking Thermite’s body for every injury – and there were too many of them – Ace started to tend to those he could take care of. He cautiously dragged Jordan’s body underneath a small tree, the branches and thick foliage of which would protect them, should there be any rain in the afternoon. He took his emergency blanket out and wrapped Thermite’s bandaged body in it, to make sure he wouldn’t get cold. He used his own knees as a pillow for his head, and continued to clean the wound on his skull, applying pressure with the sterile gauzes from his kit to stop the bleeding.

The whole thing was breaking his heart. Seeing how Jordan once again saved his life and got hurt in the process. When they had been practically ejected from the plane, his wrapped parachute had scratched something: the plane’s doors, someone else’s bag, just… something and it had unwrapped in his fall, tangling in his legs. He had thought it was over. That he would never make it. And then Jordan had appeared out of nowhere, flying to him like, let's be honest, Superman. His burnt gloved hands had untangled him and pulled at his chute and Ace had been flying high in a matter of seconds.

At least he was alive. But his breathing was hoarse, Ace was now sure that he had at last two broken ribs. He had managed to put his nose back into place by cracking it safely but… there were just so many injuries and the bleeding from his head… He was afraid it wasn’t just a mild commotion, but a severe skull fracture, perhaps even some internal bleeding?

What if Jordan didn’t remember anything when he woke up? What if he had severe brain damage and could never be an operator again? Never talk again? Nev-

Ace squeezed his eyes and tried to push his tears away. Jordan didn’t need him to cry right now. He wasn’t even the worst case he had dealt with, during his time as a paramedic. But… fuck, it was his sweetie pie.

Ace reluctantly let out a small tear, pearling on his cheek and dropping on Jordan’s emotionless face. While still applying pressure to his wound, he used his other hand to take the small vine leaves that had been either tangled with Jordan’s equipment in his fall, or fell on him in the meantime. They were still green, vivid, alive, yet not for long, since they had been cut out of their main system. And perhaps Jordan was just like them.

1 hour later, he had received a communication from Ash, telling him help was on the way and that they would get them by the end of the afternoon. They hadn’t figured out how the White Masks had known they would be parachuting several miles away from their secret warehouse, but somehow, they did. But everybody was safe, only Dominic got out with a twisted ankle and… well Jordan.

Ace was now sitting, his back pressed to the mossy tree, Jordan’s head in his lap. He had stopped the bleeding, disinfected the wound and safely wrapped it with a sterile bandage. Ace was trying to think of other things like his social media, like how he could perhaps convert his mother to photoshop so that she could create banners for her knitting tutorials, or her Instagram photos. Or how he could tease and annoy Jordan with another flirty prank and… all his thoughts kept drifting to him. God, when did it start to get so serious? He wondered. Well, maybe since the first day his eyes landed on him.

Ace almost jumped at it:

“You want water? Are you thirsty?” Ace asked, as slowly and clearly as possible.

“You’re not swimming Jordan. Can you try to open your eyes for me?”

Jordan grumbled some more, but tried to open his eyes. He flinched at the bright light, but fluttered his eyelids till it was okay. Ace quickly looked at Jordan’s pupils. They were wide.

“See, that wasn’t difficult, sweetie pie?” he added. “Now you can see that you’re not swimming.”

“Jordan, can you look at me, please?”

“Please, I just want to see if you’re hurt.”

“There you go, sweetie pie.”

Oh God, he was back to his nonsense again.

“Are you in pain?” Ace gently asked.

“Can you say your name, please?” Ace asked to continue his medical assessment.

“That’s not your name, either.” 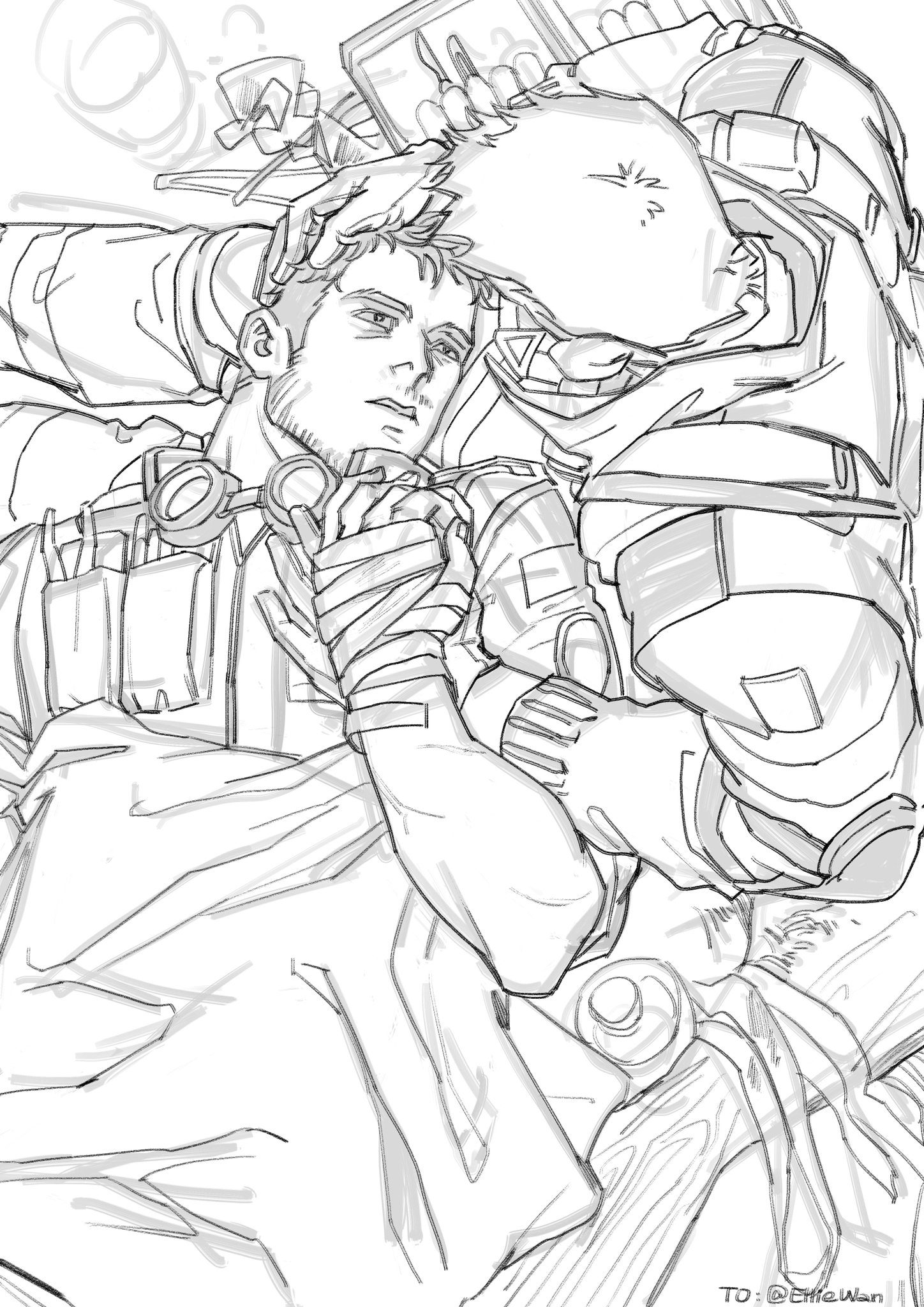 Ace gaped at him:

“How did you say my name so well?”

Ace smiled and kept track of it in his head.

“Aaaand there he reboots again.” Ace sighed. He then gently took Jordan’s chin in his fingers and asked: “Look at me again, pretty please?”

Jordan tried to fix his gaze again, but his eyes were still shaky and watery. Ace unconsciously caressed his hair with his other hand:

“Don’t you remember who I am, Jordan?”

“Ok so that was both super nice and racist, well done.” Ace sighed.

“Hush, hush, hush calm down, Jordan. You’re not. But you comment a lot on my skin color and-”

“Jordan! We were getting to quite a serious conversation! Stop rebooting!”

“Wait, wait, wait sweetie pie. Just tell me where you’re hurting, and I can see if I can do anything?”

“I’m afraid I can’t do much about that right now, sweetie pie. Just keep still and it won’t hurt too much.”

Ace’s hand stopped stroking it and Jordan glared at him. Ace sighed:

“Hum… You know, you’re not really in your right mind. I don’t want to take advantage of it.”

Jordan deeply looked at him with his wide pupils. As if he was trying to see something in the depth of Ace’s eyes. He then lifted his valid hand from under the emergency blanket and almost brushed Ace’s cheek when he whispered, with wide-open eyes:

Ace chuckled. He grabbed Jordan’s hand and gently put it back under the blanket. He took another leaf from Jordan’s hair and looked at it:

“Maybe I should Instagram it. What do you think, sweetie pie?”

But Jordan’s glance changed. His eyebrows knitted and he stammered:

“Where are we? Are you hurt?” Jordan asked.

“We’re in the forest, everything’s fine, what do you remember?”

“Not much, I… I remember breakfast and… do I have a blackout?”

“I don’t remember saving your ass.”

“How do you feel anyway?”

“My head is swimming.”

“Well I actually got that point.”

I hope you liked it. Lemme know :)
I'll try to do better for the other prompts.
+ credits for the fanart go to Woody, who you can follow on Twitter and Tumblr, I can't thank her enough for this gorgeous art <3 <3 <3